Habitat is the first open call exhibition at Contemporary Six recognising the importance of closing the gap between the number of male and female artists currently represented in private art galleries. 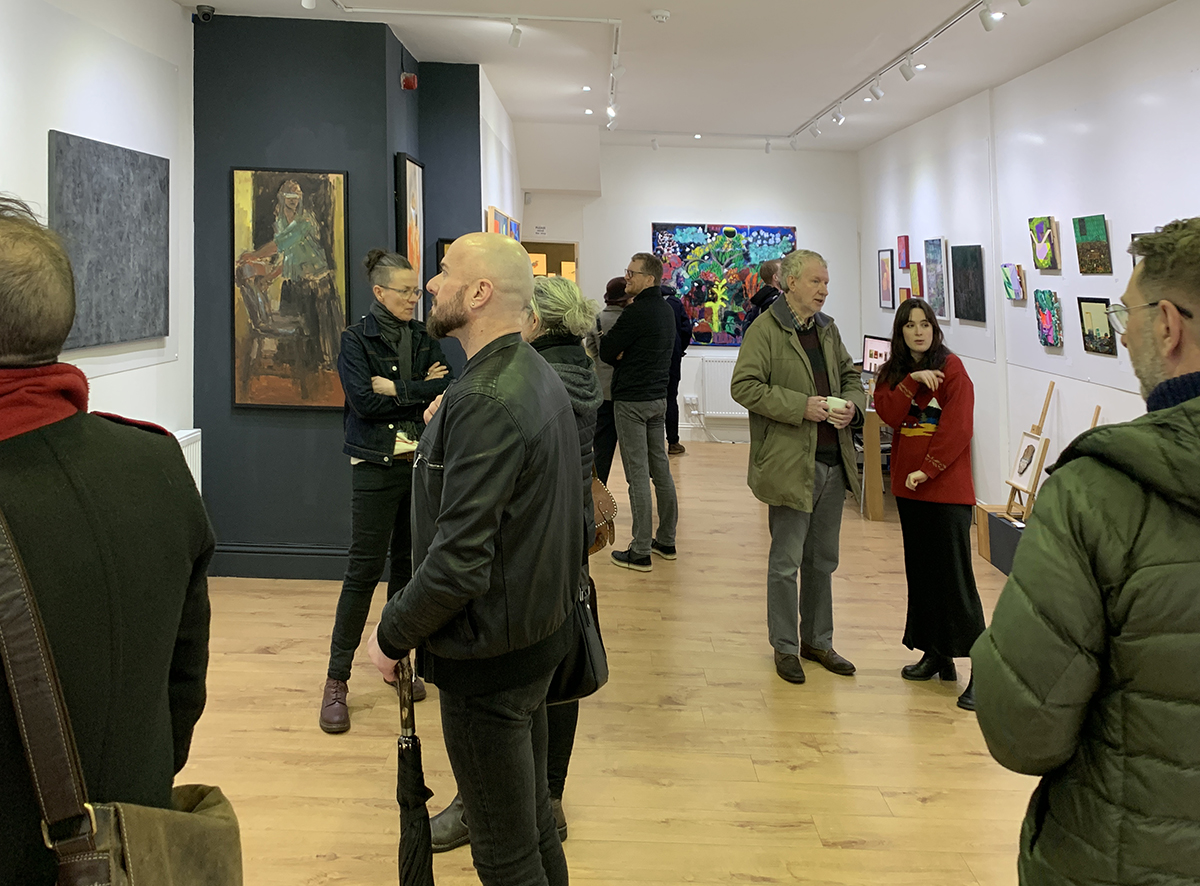 The day after storm Eunice (and her brother Dudley) I was due to go to the launch of ‘Habitat,’ an all female artist exhibition at Contemporary Six on Princess Street. After a couple of hours looking out of my window at what was now snow covered ground I decided that the trek would be worth it and ventured out.

When I arrived at the busy gallery I said to gallery owner, Alex Reuben that it was a good turnout. “I’m just relieved to see anybody here after the last couple of days,” he said, obviously happy that all the work leading up to this unique show had been worth it. And my own decision to brave the still dodgy weather proved worth it, too. 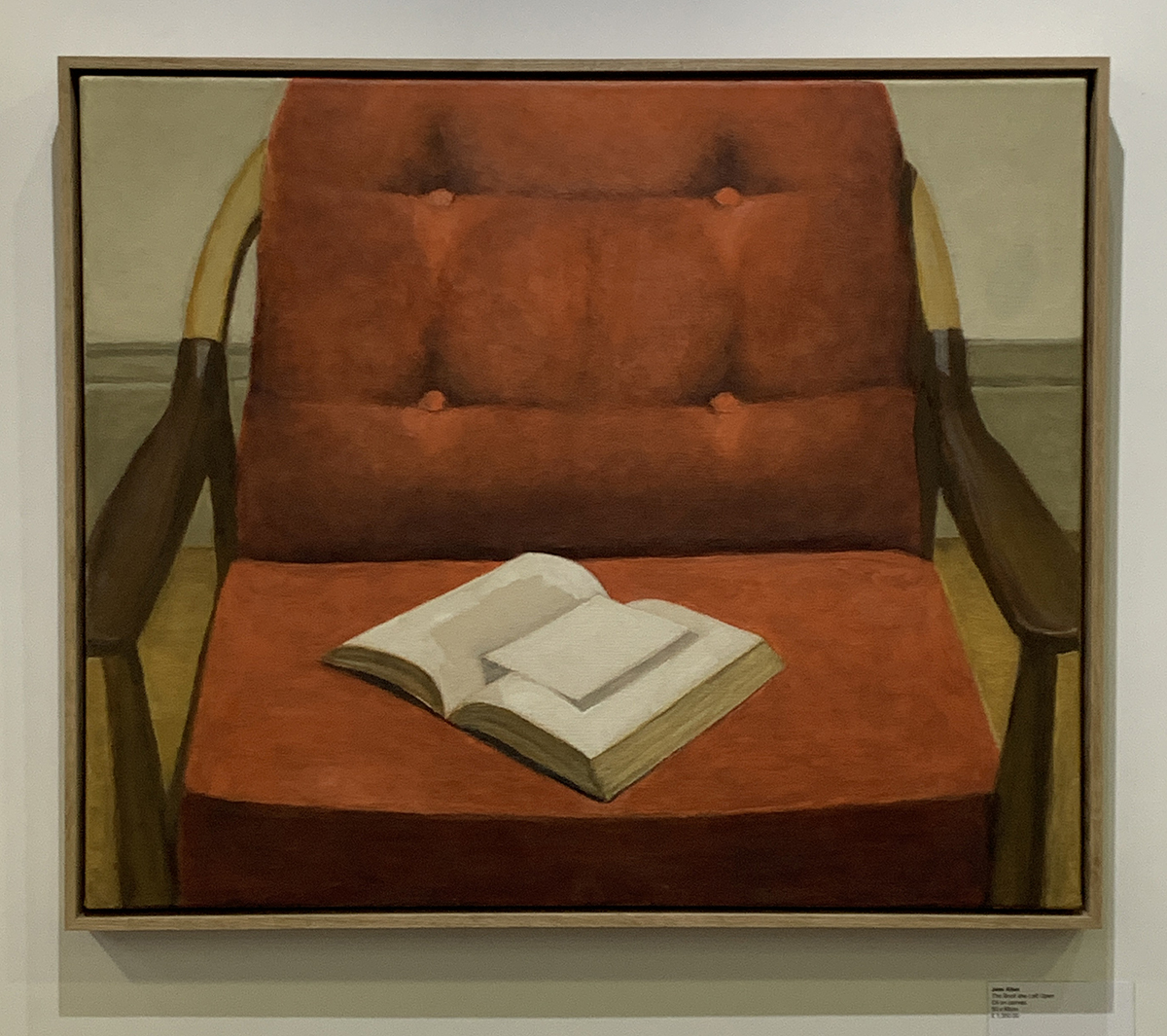 ‘Habitat’ is the first open call exhibition to women at the gallery recognising the importance of closing the gap between the number of male and female artists represented in private galleries. They’re particularly interested in the dialogue between urban and natural spaces, whether real or imagined.

A call out received over 300 submissions and, after careful consideration and curation, 54 works were selected by 23 artists. Of course, therefore, the collection is eclectic, refreshing in its diversity of subject matter. With the work of 23 female artists to view it is also, of course, necessary to select just two or three to comment on, with a strong recommendation to go along to Contemporary Six and have a leisurely look – the exhibition runs until March 5th. 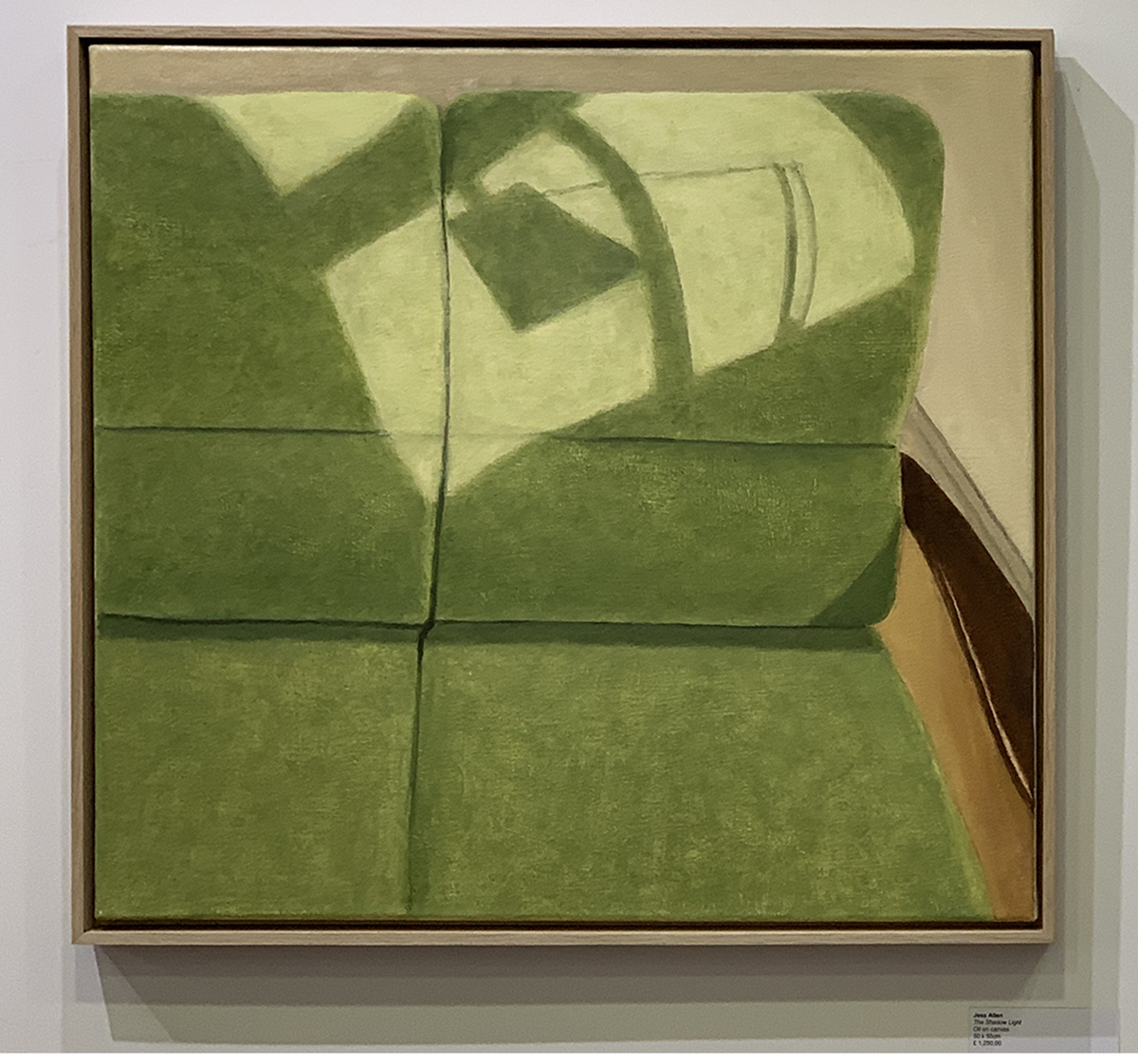 So I’ve picked out three artists. The first is Jess Allen, whose simple yet intriguing image was used for the publicity image for ‘Habitat.’ The oils capture the show title beautifully and calmly. Carefully studied and composed images relate a moment in time with stripped back composition. A brave use of simple content beautifully executed. Ghislaine Howard’s two large acrylic on board self portraits are beautifully drawn; one with a blindfold, the other with an image that has become ubiquitous to us all, a Covid mask. Sparing, spontaneous line work, with equally sparing and spontaneous use of colour.

The most intriguing, for me though, are the ‘Men Don’t Play’ series of 3 etchings by Azeri Aghayera. Is the title of the works an instruction, a question or a statement?? The drawing is impeccable and the detail utterly fascinating and disturbing. What is actually going on in these dark visions of male figures, lounging around or actually on the central stepladder prop? Art is always at its best when questions are left unanswered. 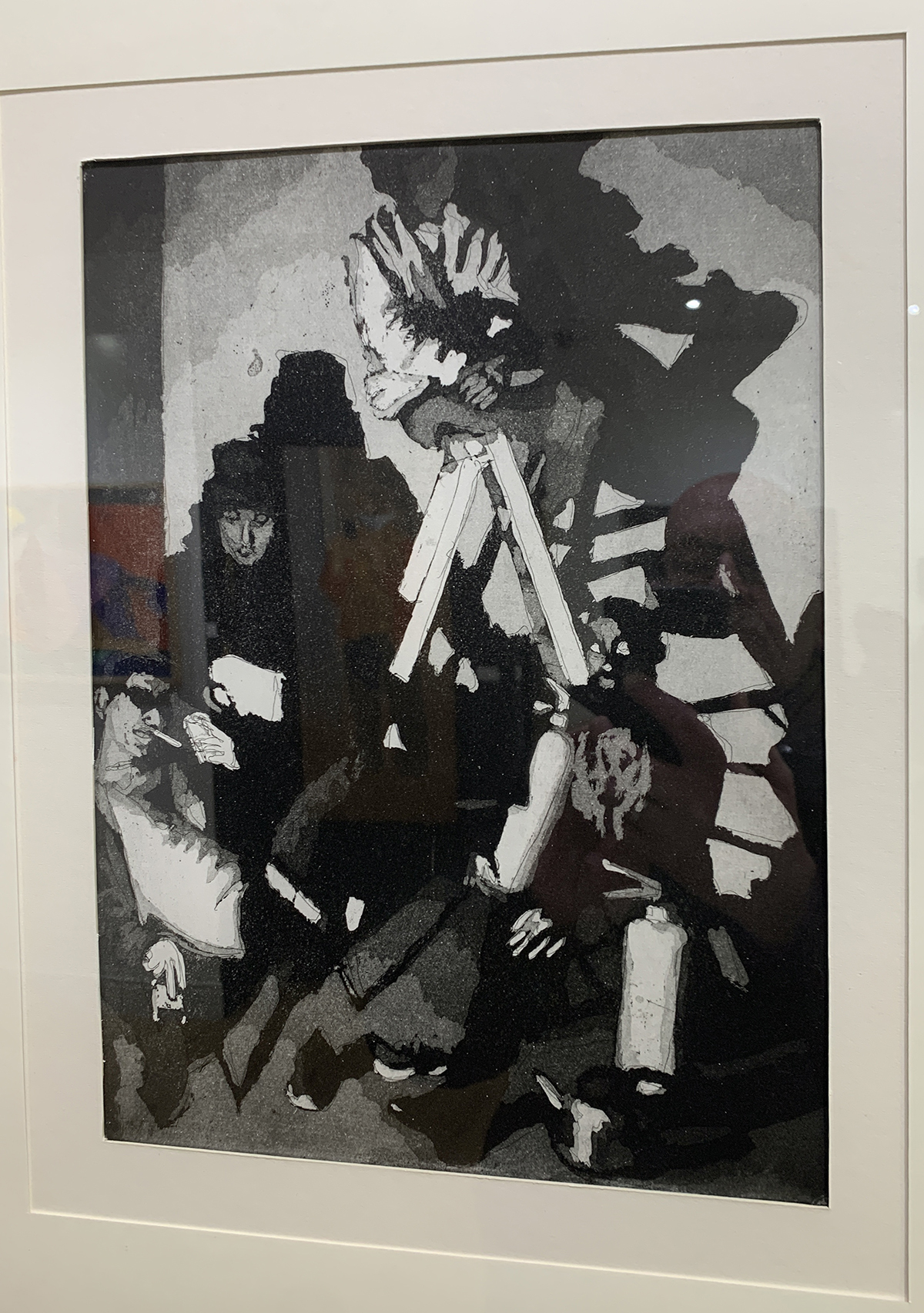 I said my goodbye to Alex and, having ventured out, thought that I would try and catch up with what Danny Jacobs, featured on Manchester’s Finest in ‘How to put on an exhibition for £99’ back in July last year. I started that article with ‘How to begin?’ and ended it with ‘I’ll watch his space.’ Since then I’ve met up with Danny several times and I still don’t know how to begin. But I’ll try.

Danny has secured the loan of a basement below the Leven Hotel at 40 Chorlton Street (entrance just around the corner on Richmond Street). But his intention is to curate, rather than exhibit, offering the space to creatives and creativity. Just to be clear, he’s not renting the space out, he is (I think) seeing the run of shows as an art entity in its own right. I.e. as one overall event, encompassing…well…all sorts of things. I hoped to see Danny on site, his own tenure of his own show – ‘My Business Skills Are Ltd.’ – having come and gone before I could get there. Instead I found two young artists. And here’s the rub on the names of the day. One was Callum Simmons…the other Nina Van Heeckeren Van Kell. Wow.

Callum studied graphic design at St.Martins in London, Nina studied ceramics in Manchester, although her roots are Dutch with an upbringing in Austria. They are both charming characters and expressed their appreciation of Danny Jacobs for the opportunity to show. I commented that I didn’t know what to make of Danny and they said neither did they, ‘But we think he likes it that way and just smiles when we question him.’ 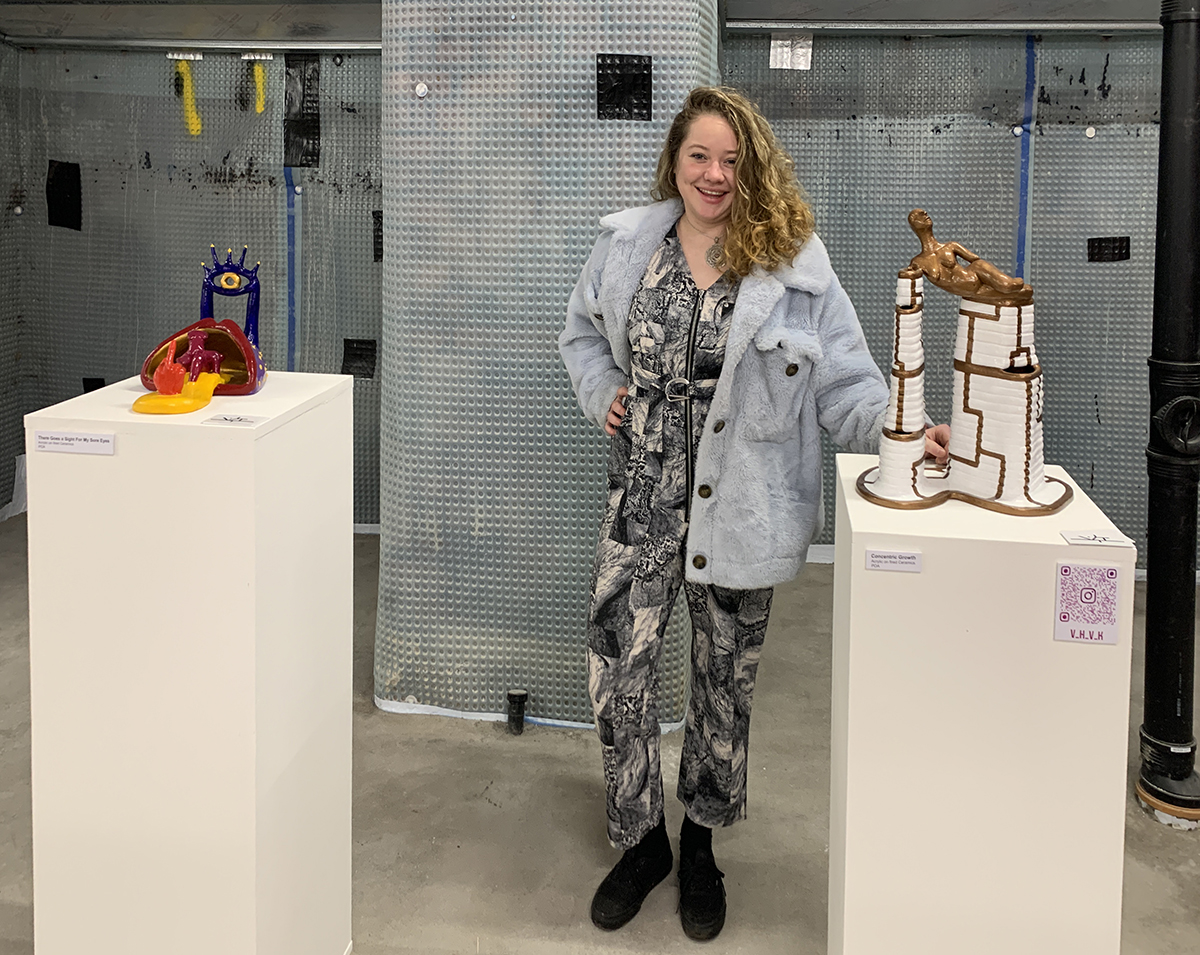 Nina’s ceramics are deliberately naïve (I hope she doesn’t mind me saying that, it’s meant with the best intentions.) Of one work with a figure on top she said, “I didn’t mean it to be there, I just plonked it on.” In contrast Callum’s work is complex, although painstakingly worked to make sense and structure of hard edge painting. He talked me through the hierarchy of colour structure which was almost mathematical, although intrinsically beautiful to look at. One piece shown – although he has completed several – is kinetic and a real mind bender, with a rotating disc whirring the spectrum through its variations. 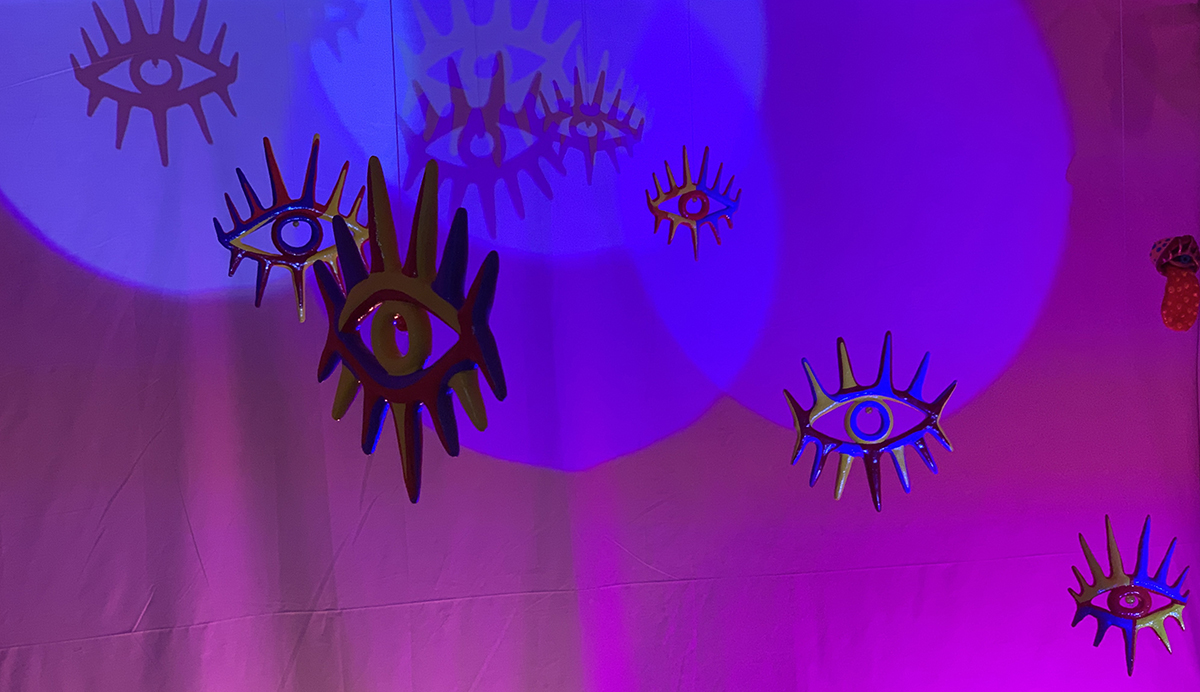 I’d urge Manchester’s Finest readers to do what I did (but hope that the weather’s better) and take in ‘Habitat’ at Contemporary Six, then go along to the basement at 40 Chorlton Street. Although I’ve got no idea what you’ll find there. That is, in all probability, Danny’s intention. Although he did WhatsApp me this morning to say that I should try to get along there this Thursday, there’s ‘An AI commanded light show.’

‘It sounds interesting,’ he added.