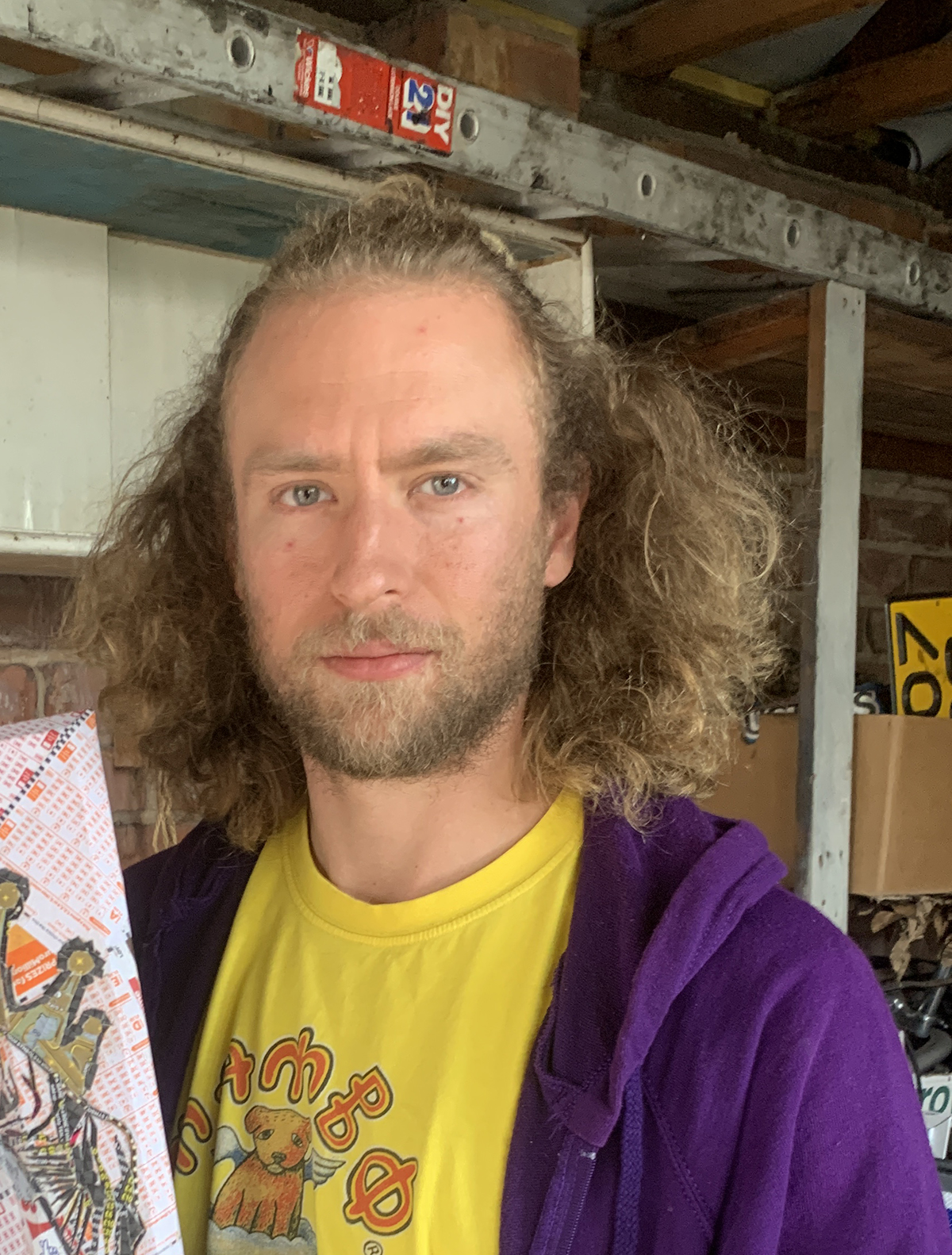 Well, I guess, outside a café on the A56 at Whitefield, because that’s where I met with Danny Jacobs. He had arrived first and was sketching. That’s what he does all the time, or at least all of the time that he’s not converting sketches into full blown pieces of work.

I must confess that after spending a couple of hours with Danny I had to phone him again later to fill in the gaps, because I couldn’t add up the constituent parts of his life to date. Plus our conversation at the caf had covered Robert Rauschenberg, Leonardo Da Vinci and a kid in Africa. 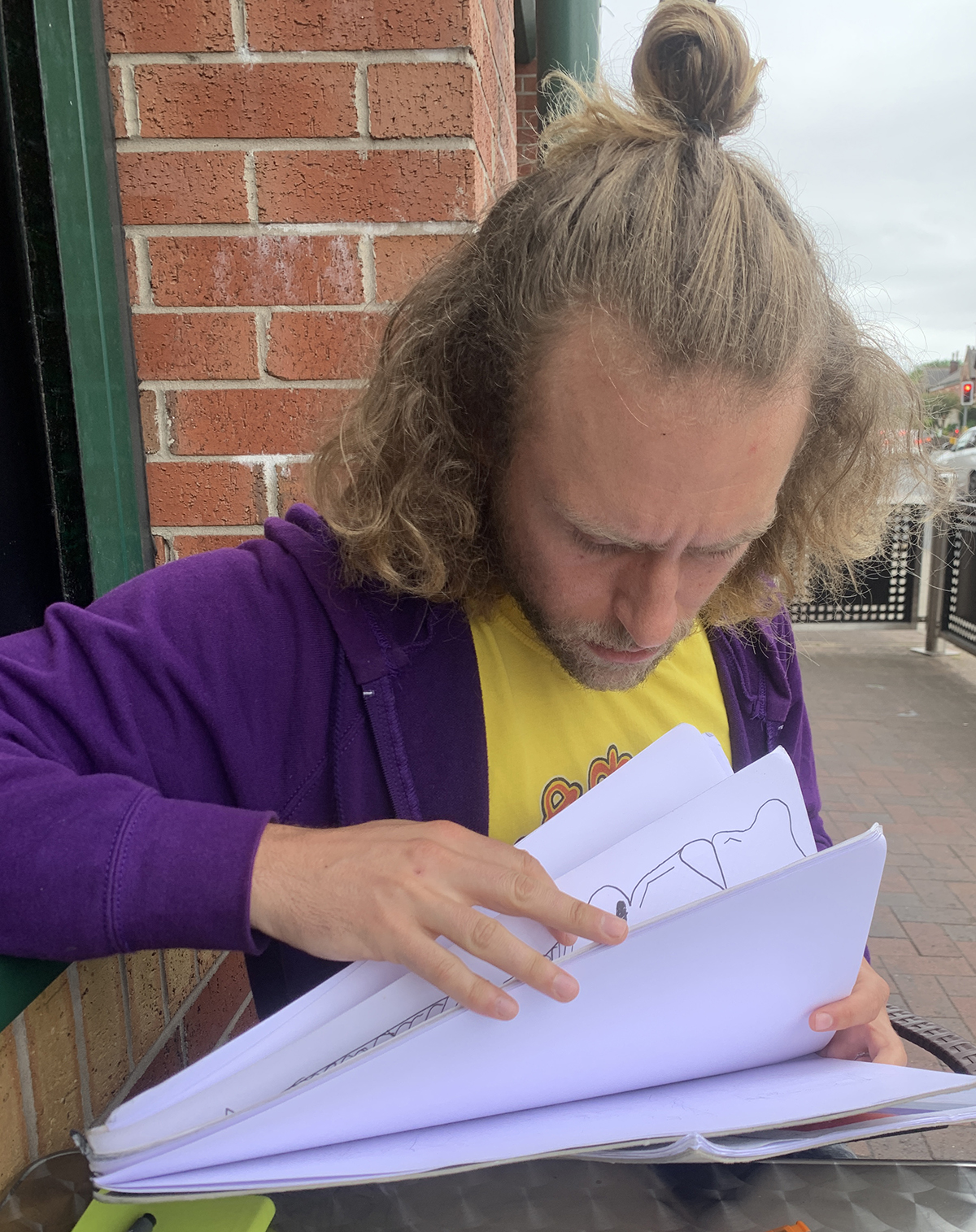 According to Danny…Rauschenberg: “Always refusing to be pigeon holed, never associated with one style of art.” Da Vinci. “The Codex is his most important work. A note book of ideas about everything.”

And the kid in Africa. “We were approached by this kid, obviously asking for something. I asked my friend how much shall I give him and he said, we’ve not seen a shop for 100 miles. He wants your water bottle, he’ll keep it for the rest of his life. It’s more valuable than money.” 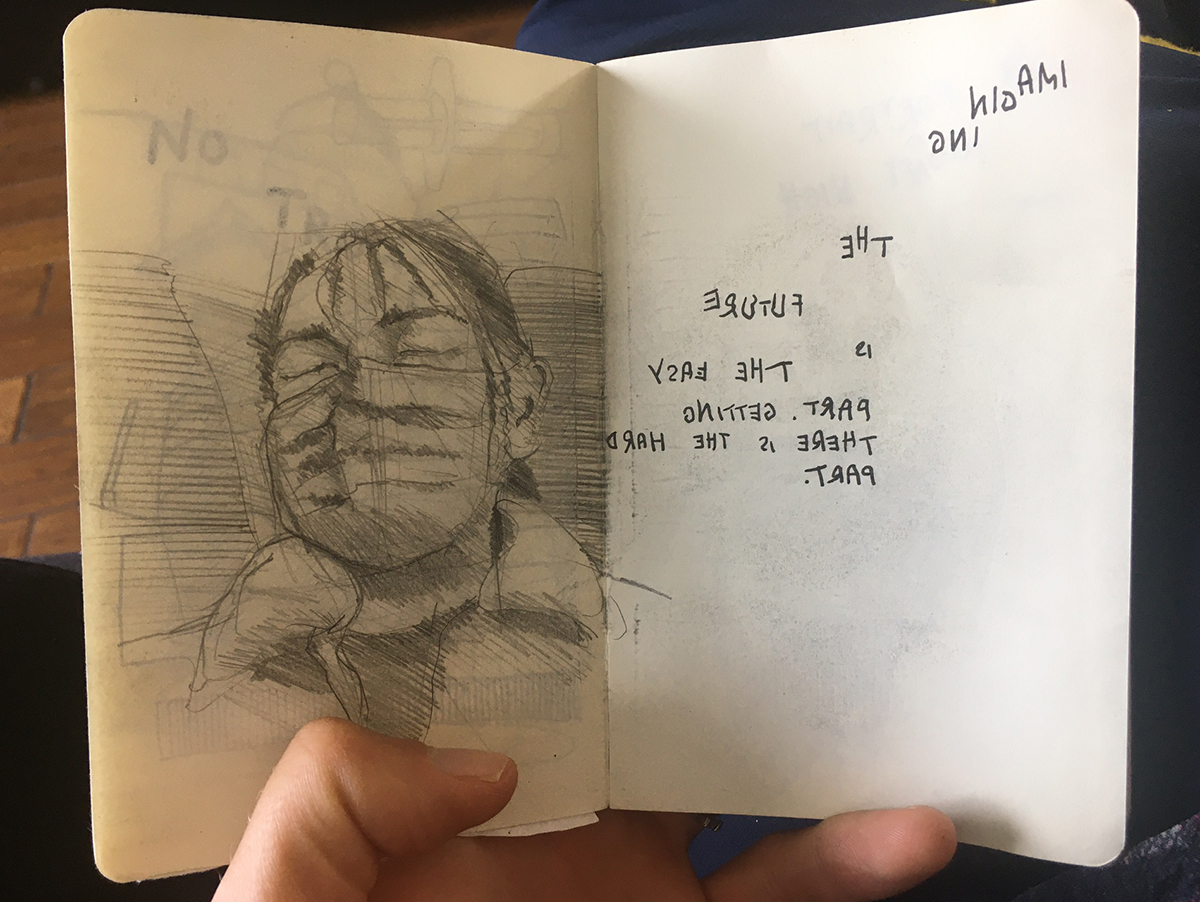 So, let’s have a look at Danny’s prequel to the life of an artist. Finance and Economics at Manchester Business School. Working in PR in Hong Kong for five years. A move back to London to set up a tech company which grew too quickly to remain fun.

“It was all about validation through money. About a fancy house in Camden. By exploiting limbic, addictive reactions to technology. The strange thing is that I’m now addicted to drawing.”

Disillusionment. Africa for time to think. Then Danny hit 30 and began to draw. 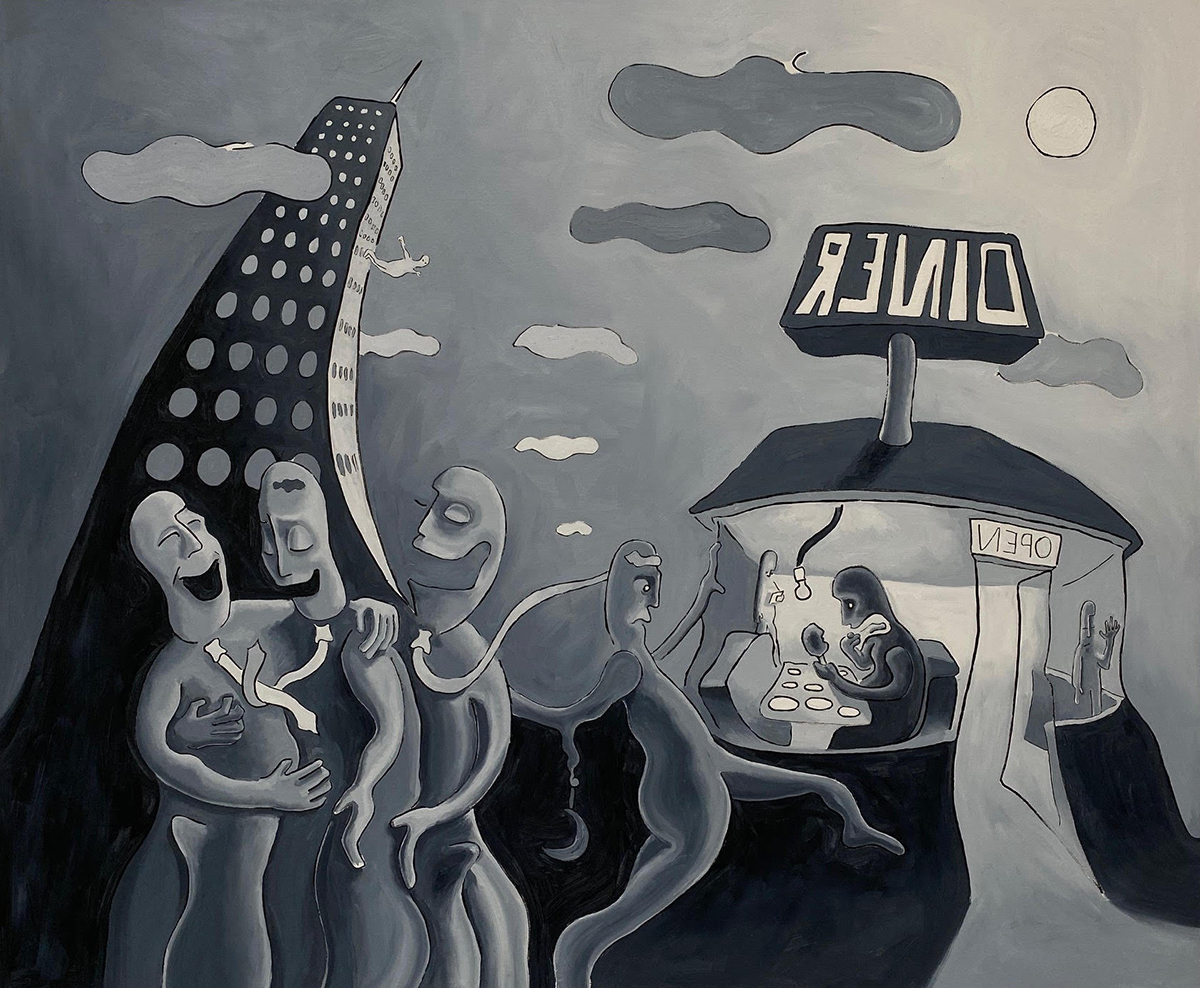 I spent four hours every morning looking at the TV, pausing it and then doing a quick drawing of the paused faces. I guess I was doing that for about eight months. Just looking and learning, drawing very quickly and then moving on. I’d discount whatever style developed and then move on. I drew and painted every day for two years. My canvases got bigger and then I thought I should maybe exhibit them.”

Now I have to admit that Danny’s first show passed me by. It was well attended and works were sold. But (judging by the photographs), it was more of an all-encompassing start of lockdown event rather than ‘paintings on a white wall in a bright clean space.’ 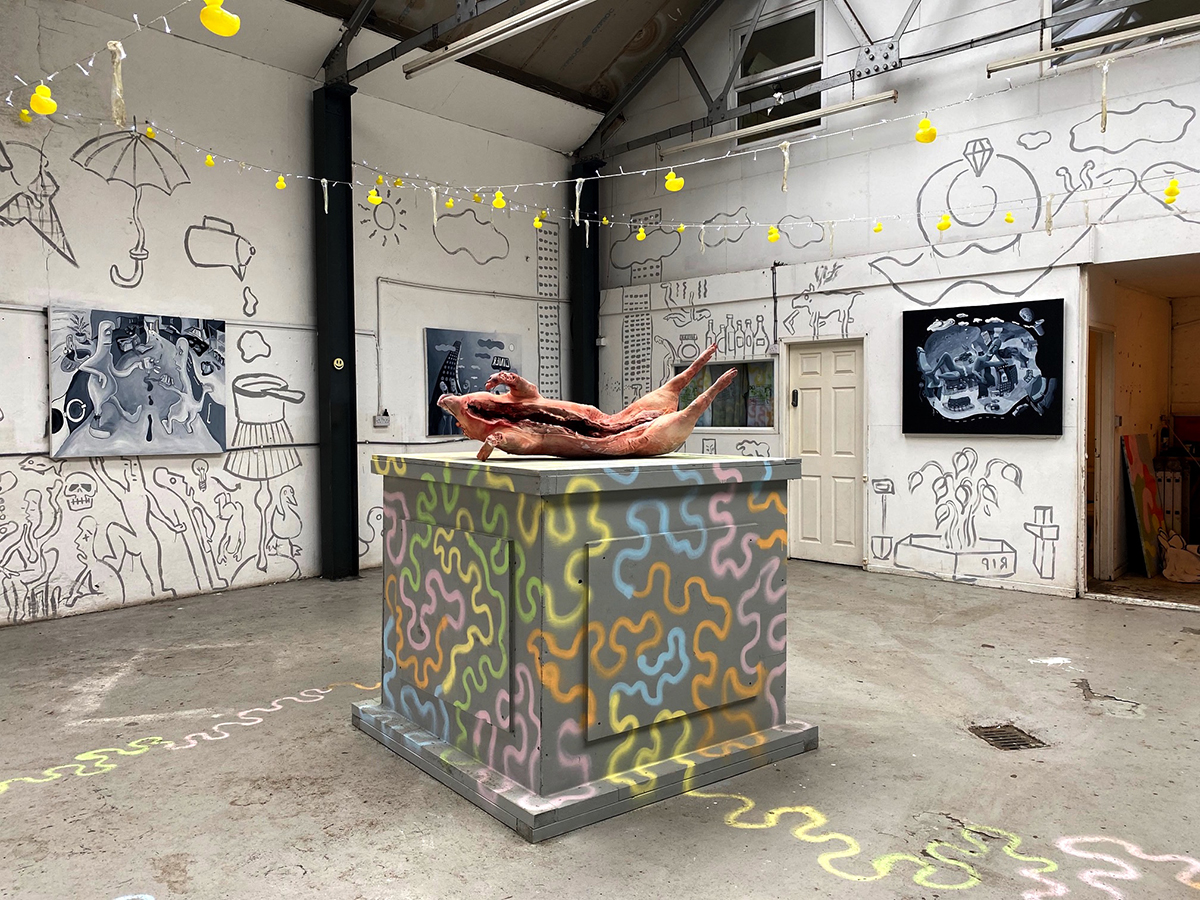 But (from the photographs), the large canvases look very good to me, with interesting technique, intriguing and difficult subject matter and – the most vital – true evidence of drawing…whatever the medium.

I shouldn’t do this (and Danny won’t like it), but the figurative quality in the paintings have a resonance with the painted characters of Marc Chagall, whilst the Ardwick industrial unit took on something of Keith Haring’s NY subway graffiti.

I wish that I had known Danny and seen the show last year, although I didn’t question how he had managed to stage a fairly major event during lockdown. But now on to the next exhibition coming soon.

“People find a style, develop that style. Become successful, sell their work because it’s the style that people recognise. And on and on. My next exhibition has nothing of the first one in it in any way.”

It was here that Danny showed me his sketch book, simple iconic day-to-day images – a teddy bear, a church, a shopping bag – and (tried) to explain how he had persuaded local shops to collect discarded lottery tickets and had then spent hundreds of hours recreating those iconic drawings in collage strips of lottery tickets on to everyday ‘backdrops, bases.’ Like a discarded door or a municipal sign. 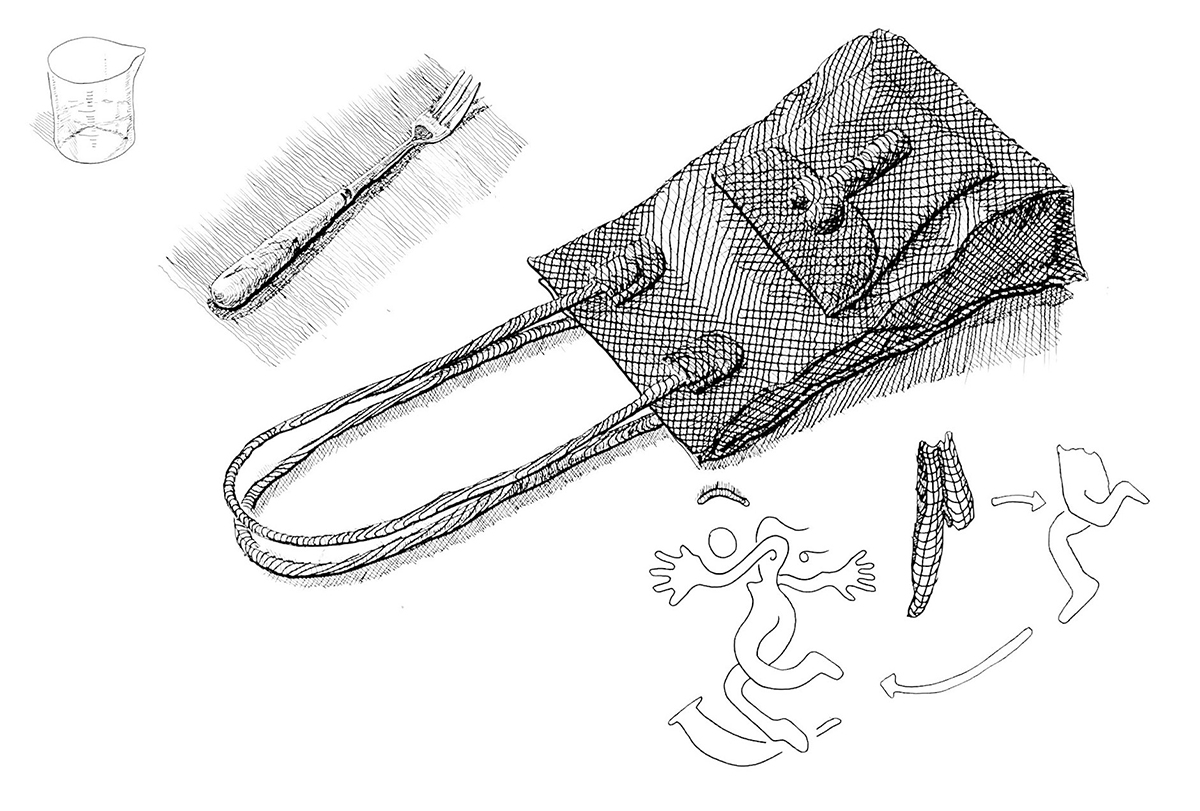 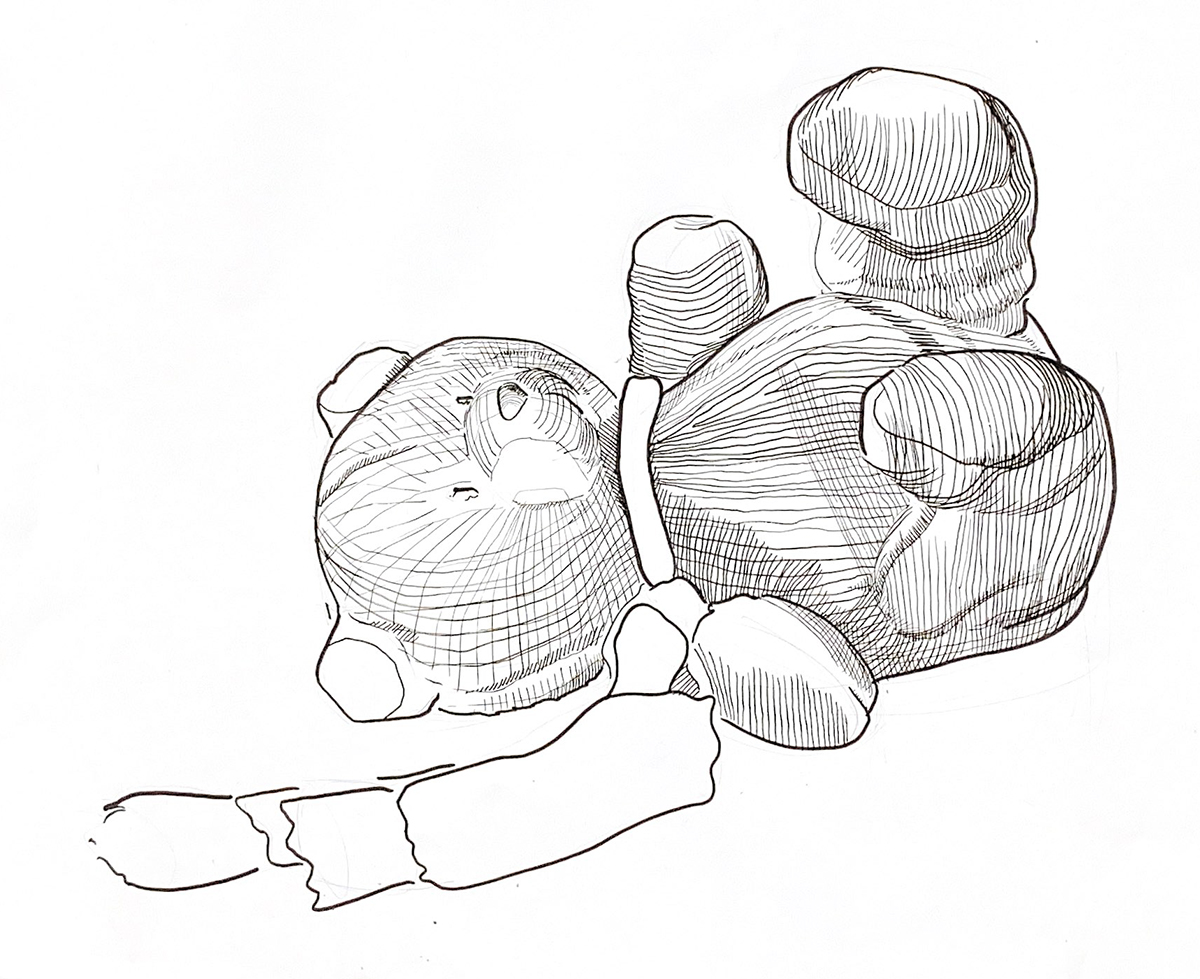 “Lottery tickets represent those few seconds of dreaming whilst the numbers are checked. Then it’s all over. The dreams of money. So, I thought, I’ll set myself a budget of £99 to produce this whole exhibition. The one at Ardwick cost too much – even the cost of the oil paint was a lot. Thrown away lottery tickets, discarded doors… So far it’s only cost £24 so I’m way under budget. I’ve even made the glue myself.” Danny smiled triumphantly.

But I still didn’t get it. So we decanted into my little car and drove a mile to his ‘studio.’ “My neighbour’s garage.” 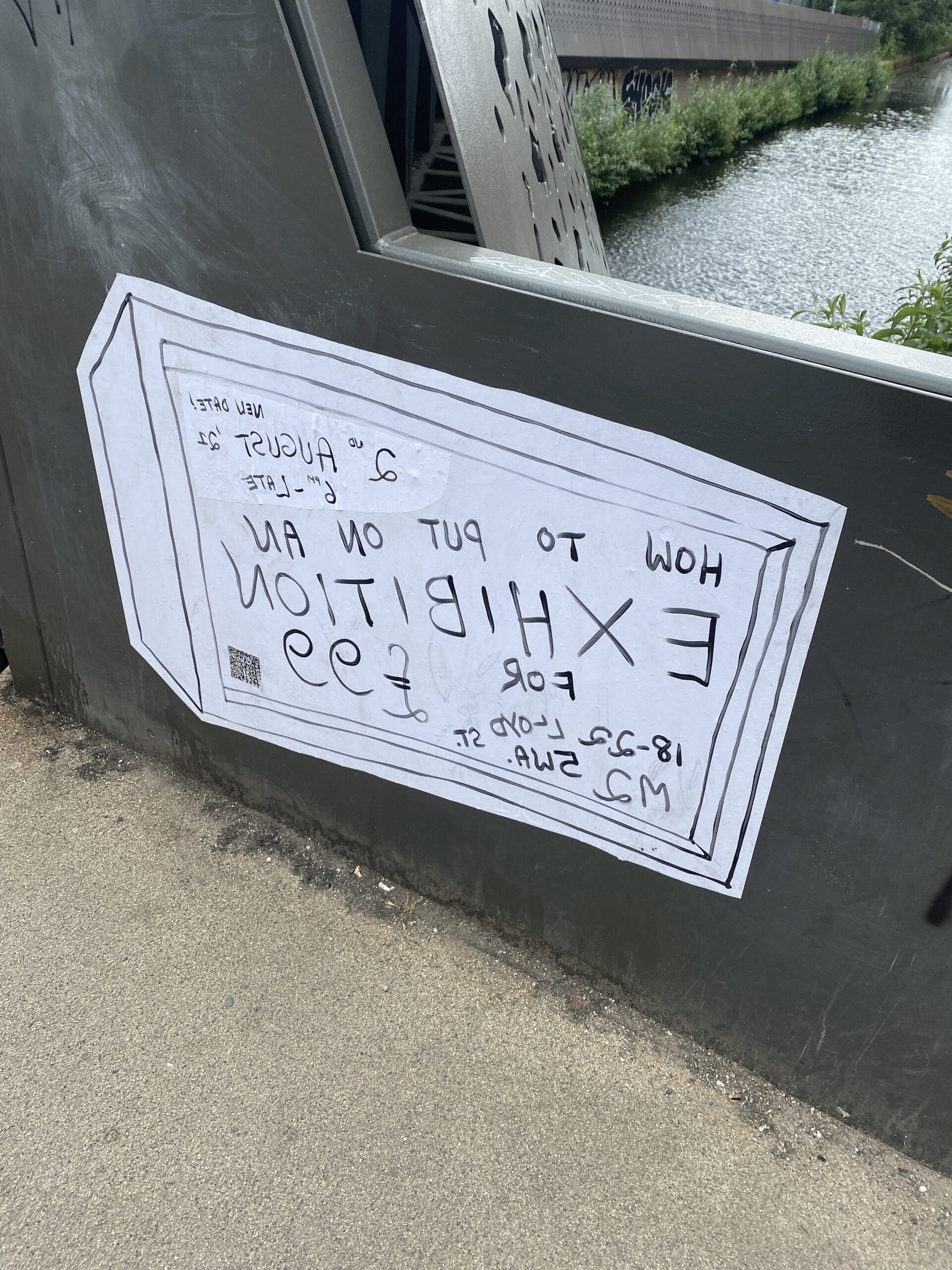 Now I saw in real life what he had been trying to explain to me at the café on the A56. Nothing could be more diametrically opposed to the content of his first show.

I really do like the imagery that was exhibited at Ardwick last year (although I’ve still not seen an original) and I’m reserving judgement on these current works until I see them exhibited. But again the venue has been given much contextual thought, although Danny wants that context to remain unexplained until visitors arrive. Suffice to say that it’s on Lloyd Street in Manchester City Centre. 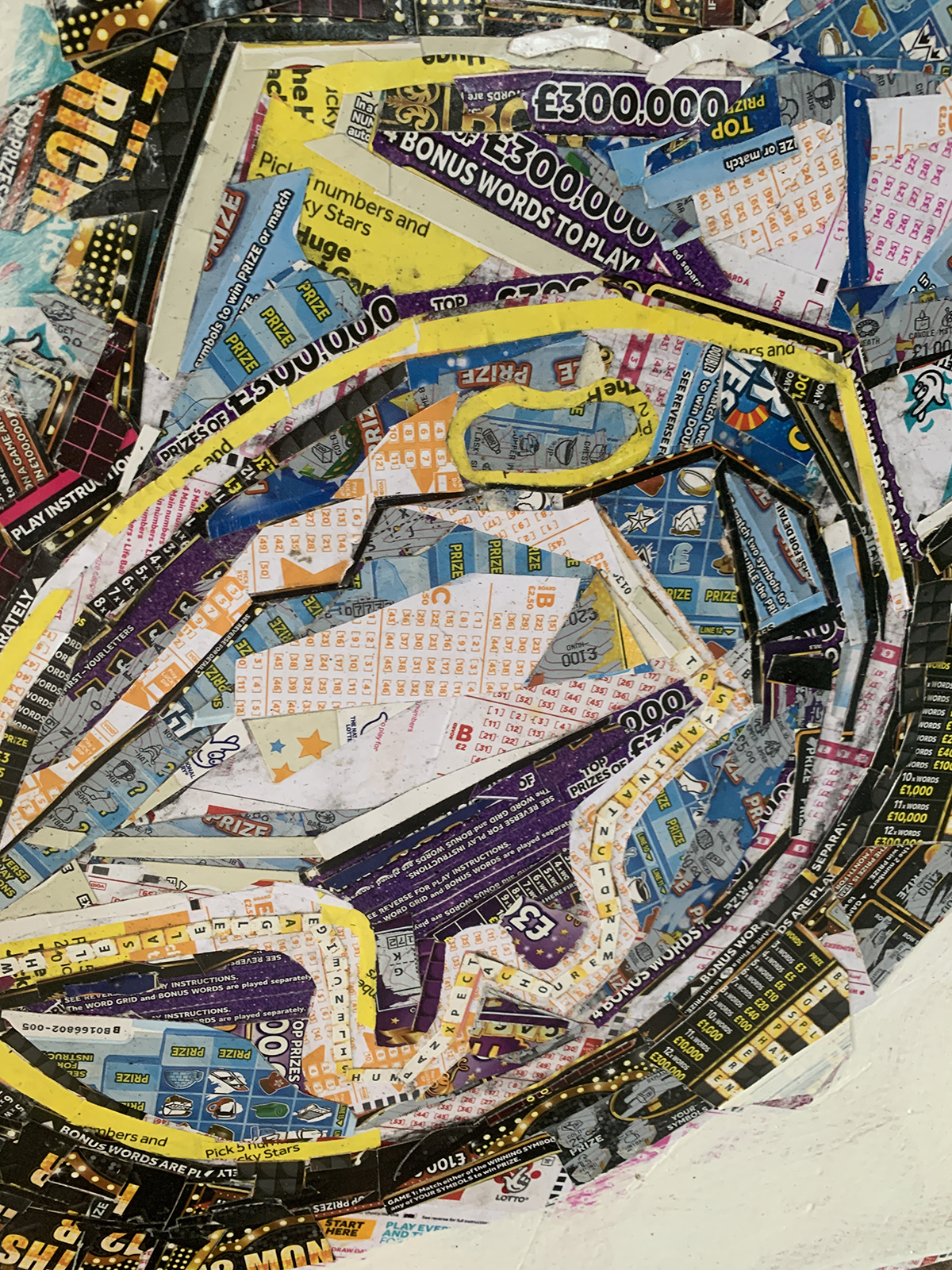 Danny didn’t want me to show a complete work here and so I’ve included just sections of a couple, to show the intricate lottery ticket collage work.

Danny Jacobs is obviously a deep thinker and he wants his audience to think a lot too. I do admire artists that hone their specific ideas, skills and style to a jaw dropping level of beautiful work. But I think that I understand Danny’s curiosity about art and expression of ideas a little after spending just a couple of hours in his company. 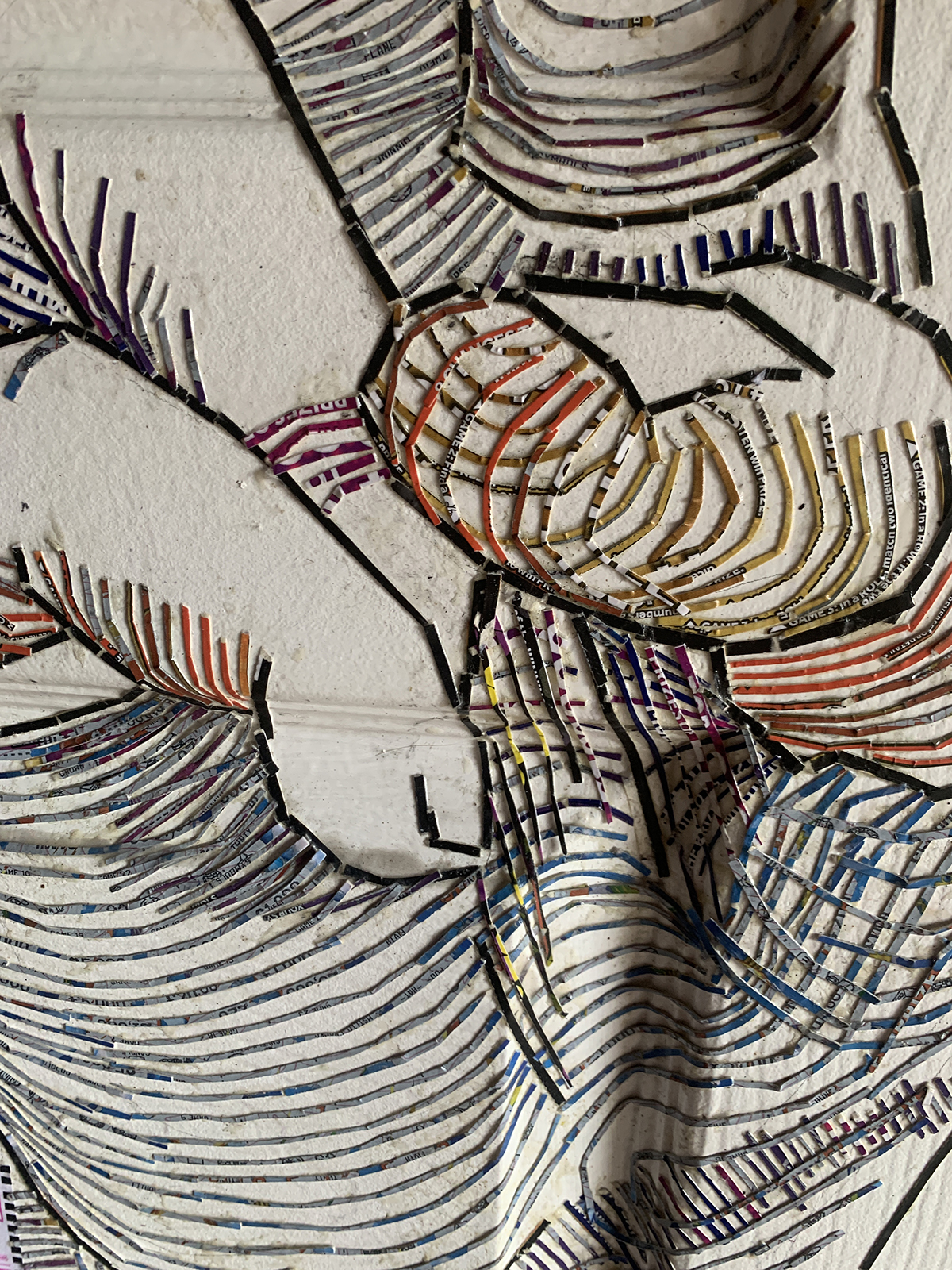 But then he’s only been doing this for three years and is, I guess, in the early flush of investigation and experimentation. I’ll watch his space.

‘How to put on an exhibition for £99’
by Danny Jacobs