Pieces of work that can be picked up, produced in quantity and available to ‘take home and enjoy.' How print is kept alive in Manchester.

It might seem paradoxical, writing for an online platform, to laud paper. But then at Manchester’s Finest we do also publish a printed magazine. Ink on paper, not pixels on a screen. There’s ample room for both.

In a digitally dominated world, paper on ink is a refreshing change. Browsing the shelves at MAGMA and thumbing through books and magazines, or scanning shelves laden with titles at Waterstones, along with shoppers on the look out for something to actually carry home, proves this.

When Montse Prats and Marc Valli opened the first MAGMA store in Covent Garden in 2000, they said that people couldn’t ‘spend their whole lives online.’

This may seem a tenuous link, but I was encouraged to find a young generation at the School of Art & Design, Bolton University, getting ink on their fingers when I called in a couple of weeks ago.

Yes, much of the work at the School is digital, but seeing a wooden plan chest (much more interesting than a hard drive) and paper pinned on walls, lettering printed with old wooden type blocks and scribbled on with notes was a refreshing change.

In the print department there, students are encouraged to use traditional skills as part of the course, rather than defaulting to grabbing a mouse. Yes, the final images may be digitally adapted, probably in most cases converted to digital for print, but the end results are pieces of work that can be picked up, a tactile adventure, produced in quantity and available to ‘take home and enjoy.’

Taking home to enjoy (and trying to make a little money for the students) was the focus on the day I called in, with preparations underway to populate a stand at the Manchester Print Fair. A fair which has become a fixture in the Design Manchester calendar since it was established in 2011.

Since then the venues for the fair have been as eclectic as the work: Night & Day Café, Twenty Twenty Two, MadLab, the People’s History Museum, London Road Fire Station, B.E.A.T. Street and Manchester Central Library. Venues punctuated by pop-up shows at Fred Aldous. This year the fair was at Manchester Cathedral.

That was my destination to both have a look around and catch up with the students from Bolton who I had chatted to in their University print studio a couple of weeks earlier.

It has to be said that this was the morning after the fire at Bolton University Halls. The students and staff manning the stand had had very little sleep. Although none were from the Halls, of course they had been involved in trying to communicate with students and friends until the early hours of that morning. Anxious phone calls continuing at the Cathedral as they tried to make sure all was well. Nonetheless they were keen to talk about the print work that they and their fellow students had produced.

The Bolton University School of Art & Design print work was interesting and eclectic. As well as producing the images, students are taught – and engage with – paper stock, binding and folding methods and a host of other techniques to produce work ‘to take home.’

Of course within the overall fair the style and techniques used are rich and varied. That’s the point. They range from hand engraved prints to iconic Risograph prints. The only requirement for prints is that they can be produced in multiple editions.

Fred Aldous bucked this rule with their ‘five minute portraits’ stand, using a clever periscopic device. But we all love Fred Aldous so they can break any rules that they want to.

The Bolton influences ranged from a student trip to Hong Kong earlier this year, to The Bauhaus and fantasy characters. Other print work featured live projects and illustrative images.

On the day that I had visited the School, packs of prints – some converted to packs of greetings cards – were being collated and packaged, ready for transport to the fair. At the fair, the iconic Cathedral was busy, people just interested to chat about the work and the techniques involved, many buying Christmas presents (encouraged by the brass band playing Christmas carols). Something to take home, wrap and give as a present.

The Hot Bed Press in Salford’s own Christmas Print Fair is on December 1st . You may have missed the opportunity to buy a print at the Manchester Print Fair, but there’s still time to see what’s on offer at Hot Bed (previously featured in Manchester’s Finest), chat to print makers and maybe take something home, rather than look at on a screen. 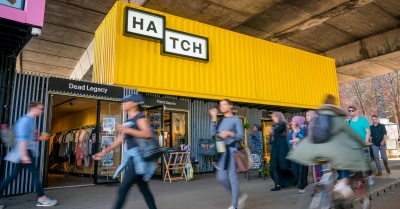