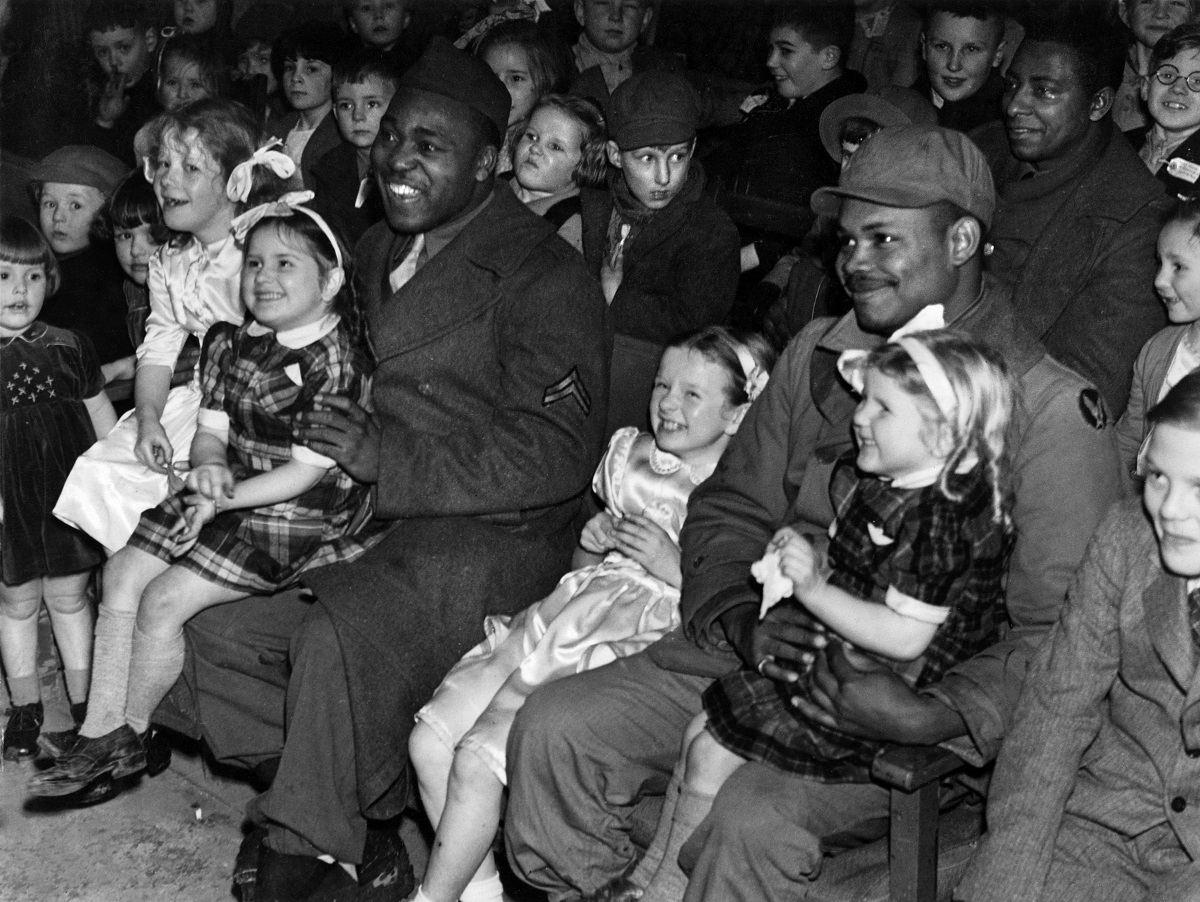 Happy picture of the children with American soldiers enjoying a programme of pictures.
December 1943

It would be hard to imagine a book that resonates more with today’s uncertain times than Clive Hardy’s latest nostalgia offering – The Home Front – Britain 1939-45.

The result is a hardback that encapsulates the hope rising from the ashes of blitzed cities, the engaging innocence and cheerfulness of child evacuees and the gritty determination of hard-pressed servicemen and women. 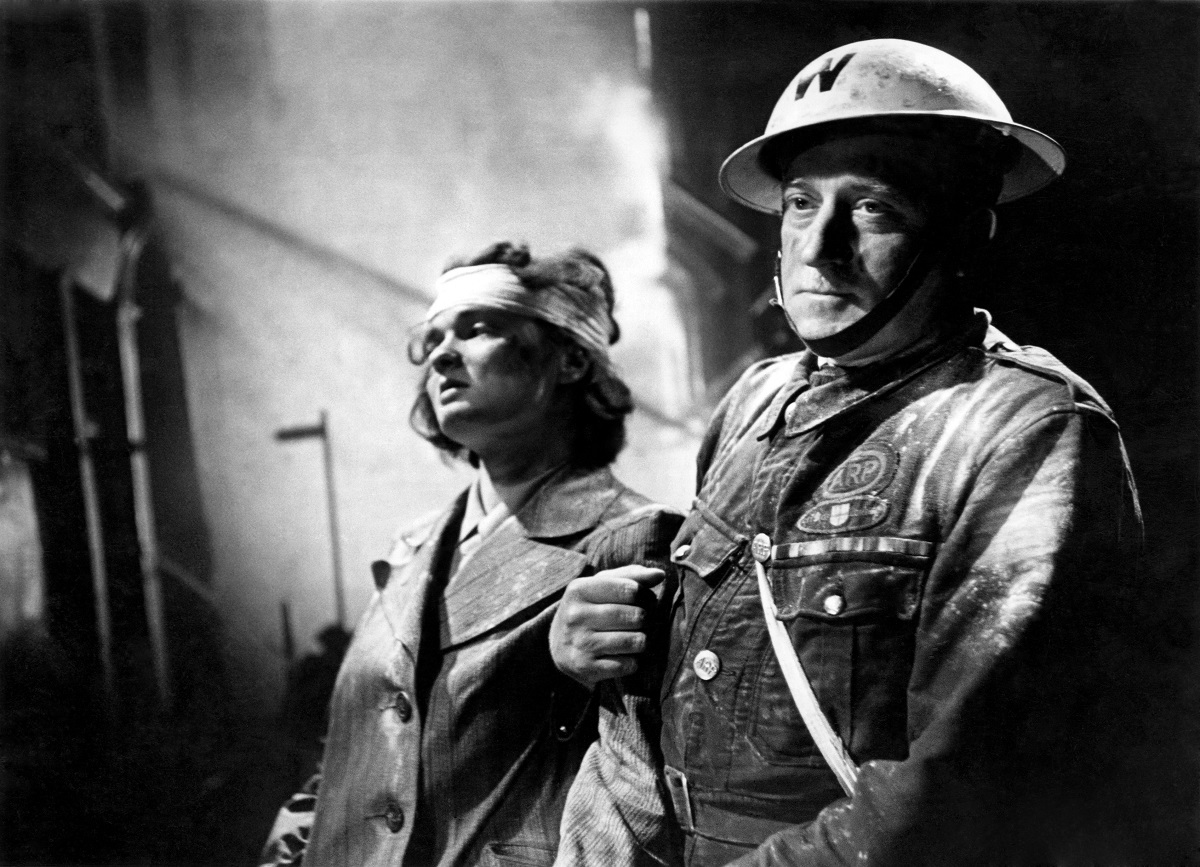 There is no shortage of photographs from Manchester and the North West either in what is the ninth publication from Withington company iNostalgia Ltd.

The Christmas Blitz of December 1940 is covered in detail, along with the industrial output of Trafford that produced the hardware to fight the war. 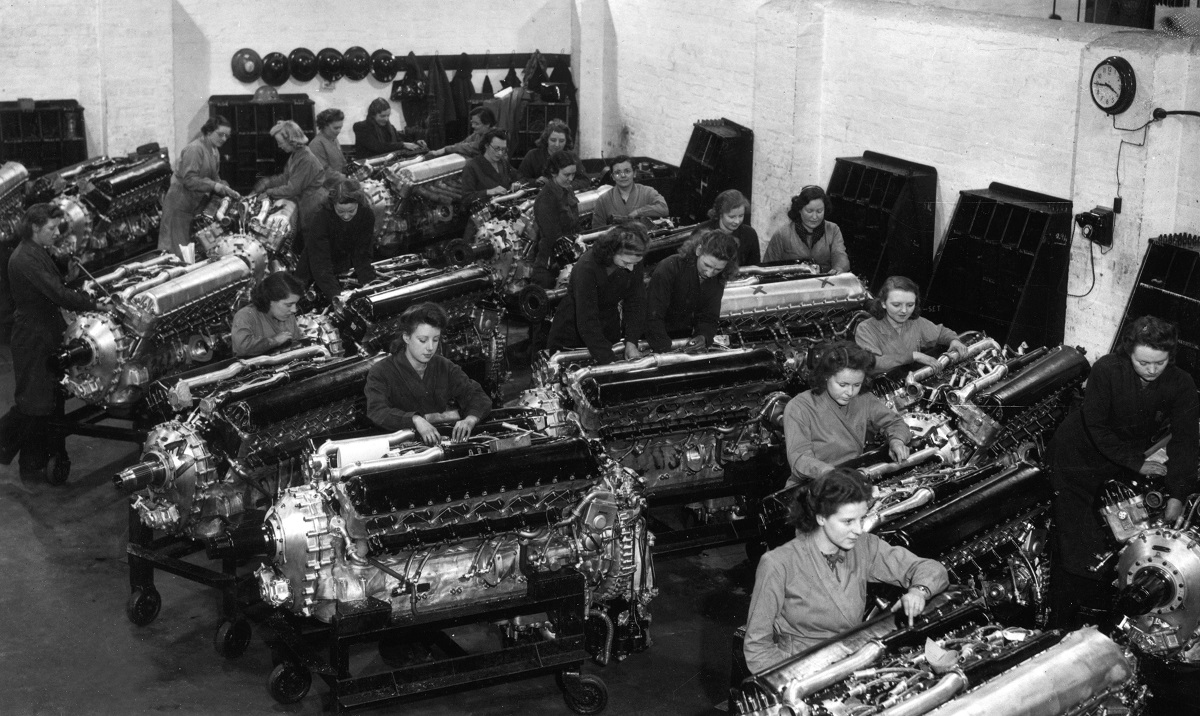 Rolls Royce Merlin engines being made at a factory in the Northwest of England. The Merlin engines will be used for many of the RAF bombers and fighter aircraft.
Picture shows a general view of one section of the factory where the engines go through a final cleaning process prior to testing.
2nd March 1942.

Images include the manufacture of Rolls Royce Merlin engines for Spitfires, Hurricanes and Lancaster bombers at the Ford shadow factory in Eccles and barrage balloons being assembled at Gaythorn Gasworks. 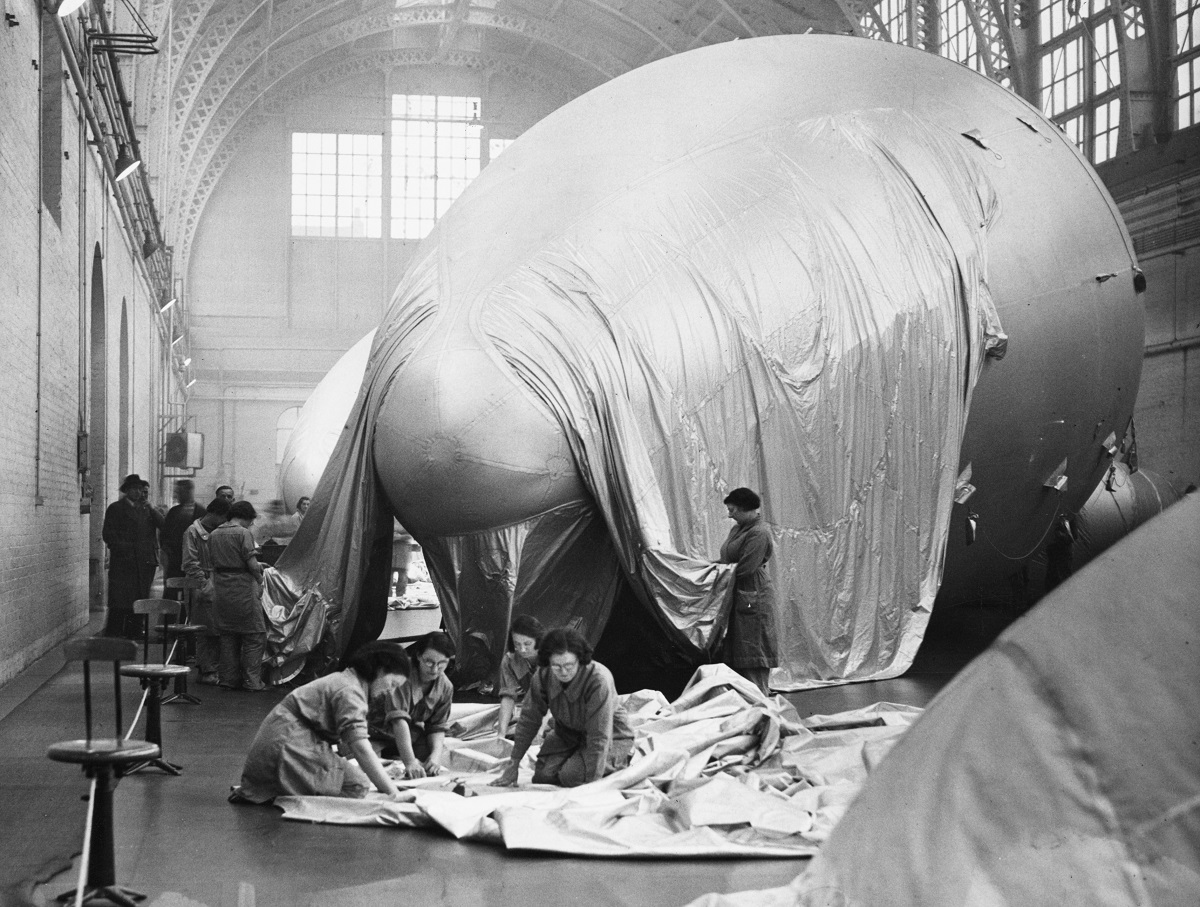 A barrage balloon is a large unmanned tethered kite balloon used to defend ground targets during the Second World War.
(Picture) Workers prepare barrage balloons at the Gaythorn gasworks in Manchester.
Circa February 1939

There are scenes of jubilation as crowds celebrate VE Day in the centre of Manchester and street parties break out in the suburbs.

And there’s Belle Vue too. Manchester’s pleasure park never closed throughout the war as thousands sought to forget their woes for a few hours or more after entering the main gates on Hyde Road. 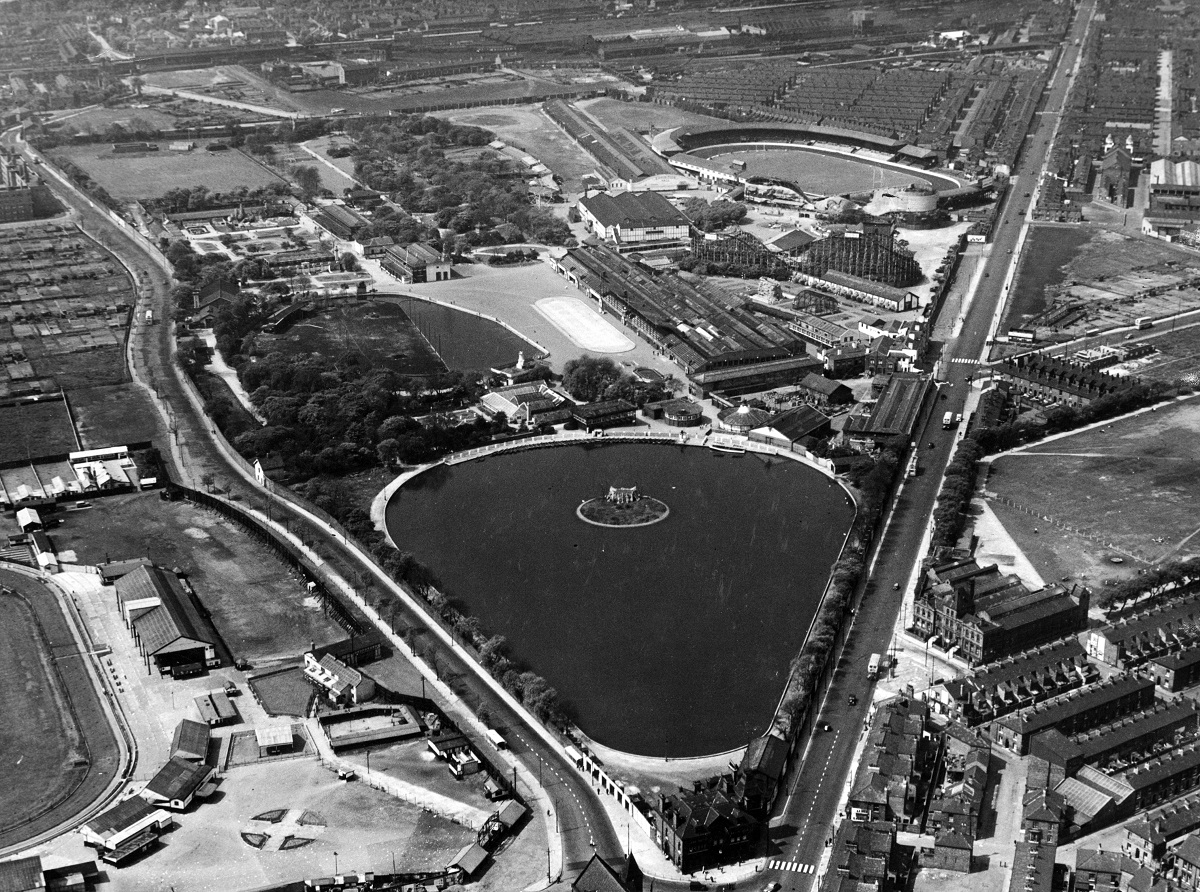 Aerial view of Belle Vue in the Gorton area of Manchester.
August 1957.

In The Home Front, Hardy takes us from the first stirrings of conflict right through to victory in Japan in August 1945. There is a wonderful mix of family memories and stories as well as the usual informed analysis from a seasoned researcher and writer.

Hardy actually started working on The Home Front well before Coronavirus first visited our shores. ‘I always wanted to gather together the extraordinary images from our newspapers during the war years’, he said. ‘Particularly our local newspapers.

‘I’m full of admiration for the work of the Home Front photographers who portrayed the struggle and kept the nation informed – often at risk to their own lives’. 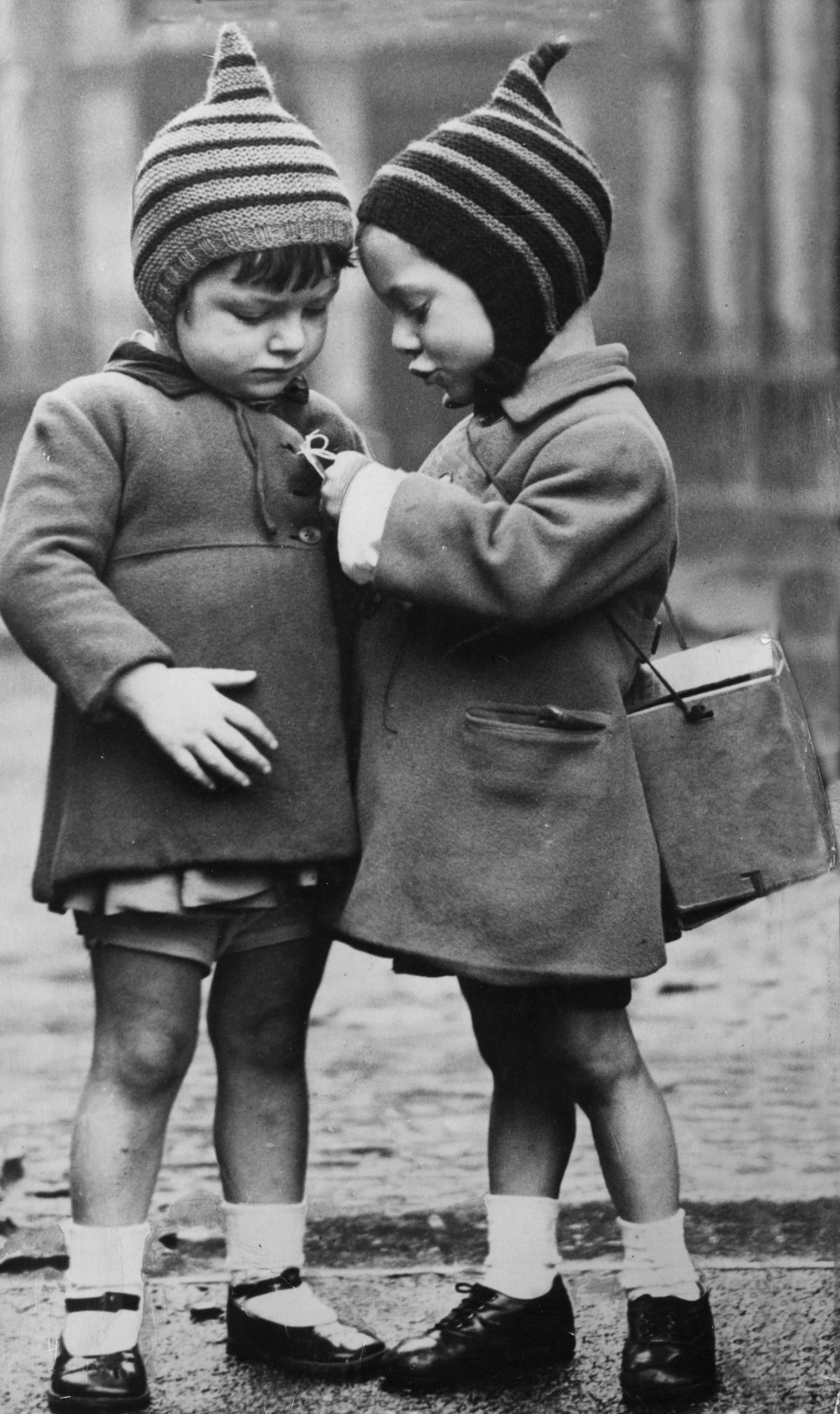 It’s a great thing to know that so many mothers and children are being evacuated from London?s danger spots to safer areas outside. The children themselves, how ever, are amazingly calm about it all. They might be going on a holiday or a Sunday-school outing. Look at these two children, one examining the Identification label tied on her companion and laboriously spelling out the words which tell where they are going. Circa September 1940

One photographer whose work is strongly profiled in the book is Daily Mirror cameraman George Greenwell, who took what are now regarded as iconic shots of St Paul’s Cathedral at the height of the London Blitz in December 1940.

‘His images are breathtaking’, said Clive. ‘There’s one panorama from the dome of St Paul’s showing the statues of apostles silhouetted against the raging fires below. It was used right across pages 6 and 7 of the Daily Mirror on New Year’s Eve 1940’. 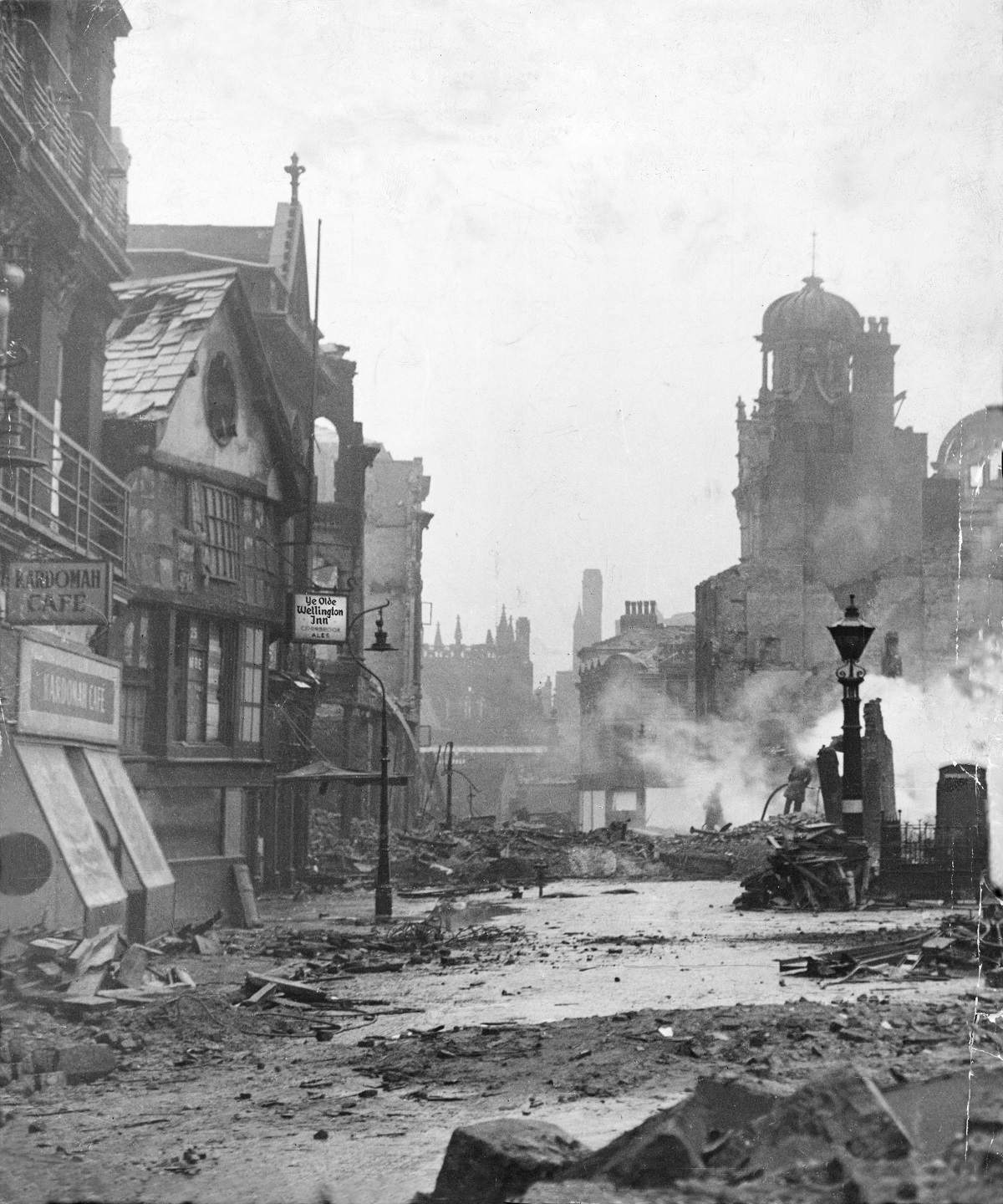 Picture shows the Ye Olde Wellington Inn in Market Place, Manchester, advertising Cornbrook Ale, brewed in Manchester.
Picture caption does not say Manchester, or anywhere, only Market Place. Mirrorpix have established Manchester due to the name of the pub and where the ale is sells in brewed.
Picture taken circa 23rd December 1940

But it’s perhaps the images of everyday life that are the most stirring in Hardy’s book. Images like workers balancing precariously on the end of a tram track in the hope of prising a damaged rail from a bombed-out road to salvage it for the war effort.

Or the heart-warming picture of US troops stationed in England spending their own time and money taking children on a cinema trip in December 1943.

There are some fascinating chapters on entertainment and sport, not always covered in wartime memoires. Football was played, albeit on a limited basis, for most of the conflict.

There are jubilant images of Preston North End winning the 1941 Football League War Cup by beating Arsenal 2-1 in a replay at Blackburn’s Ewood Park, and Charlton Athletic playing Reading at The Valley. 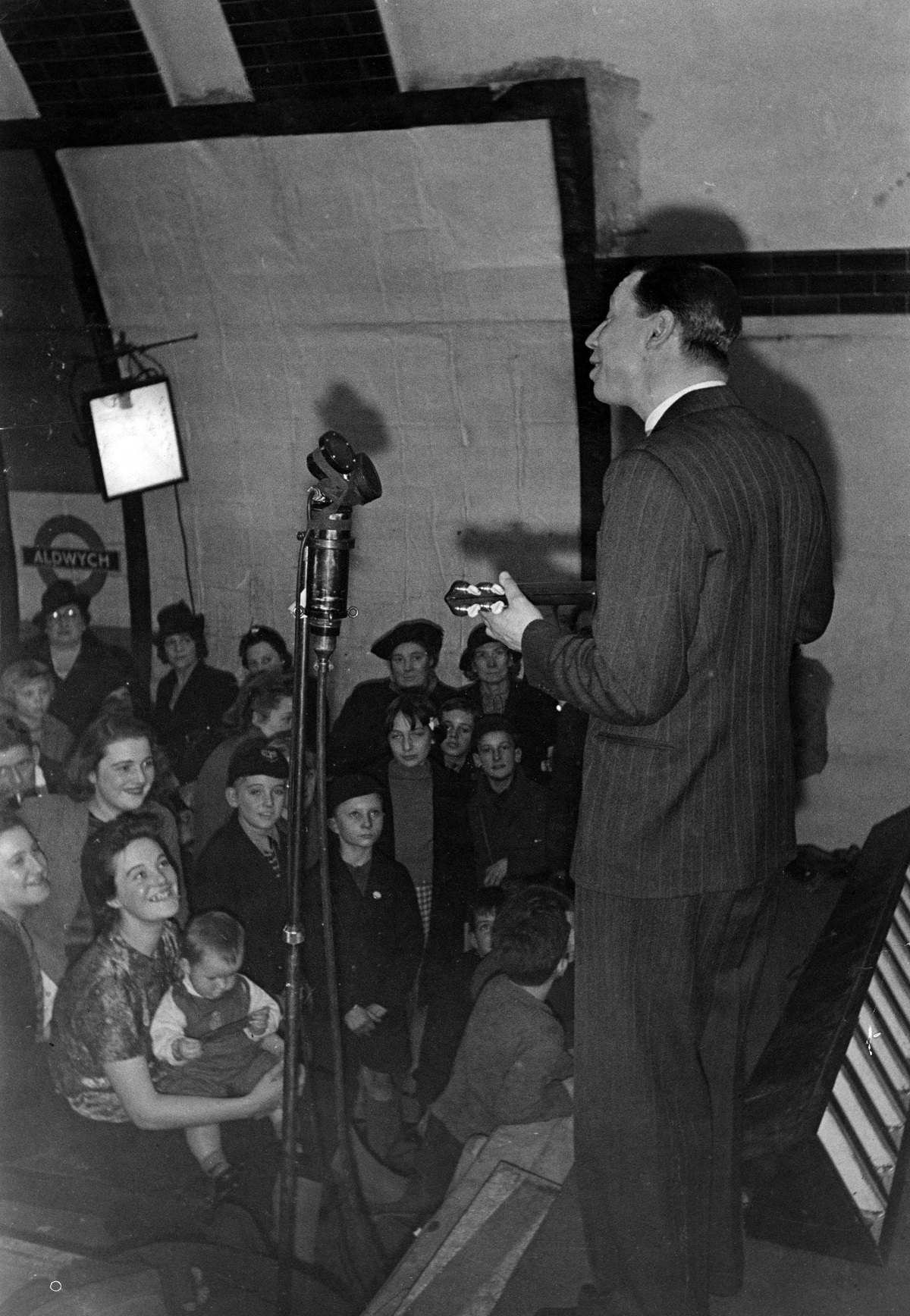 Boxing matches were staged on the deck of the Queen Mary moored in Liverpool in October 1941 and the annual Derby horse race transferred from Epsom to Newmarket.

Greyhound racing was hugely popular as it was accessible to everyone. Home-raised dogs could compete with the best on tracks throughout the country.

Hardy includes all the wartime entertainment icons – Wigan’s own George Formby, Flanagan and Allen, Tommy Handley and Vera Lynn to name but a few – as well as providing insight into the BBC Home Service and less familiar shows that toured local theatres.

He also takes an intriguing look at wartime censorship as well as morale-boosting photos that were really not what they seemed – possibly the ‘fake news’ of their day!

In an interesting piece of detective work, Hardy shows how a George Greenwell image of air raid warden Percy Dale helping a Blitz victim in 1940 was in fact a staged shot superimposed on a photo of London’s Paternoster Row in flames.

It was like the famous picture of a London milkman making his way through the rubble to deliver milk, again in 1940. The milkman was actually the photographer’s assistant. 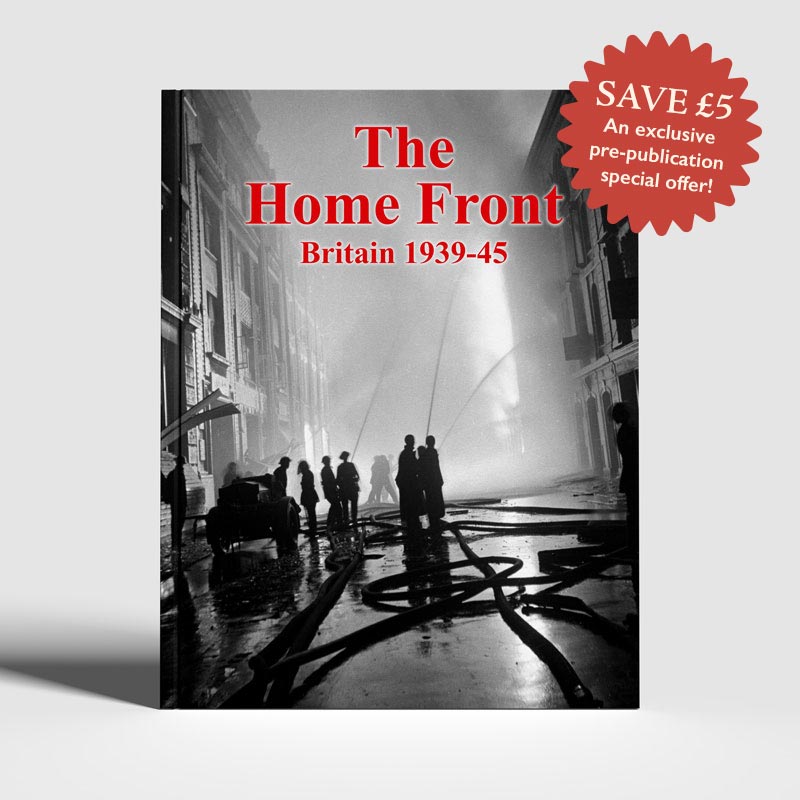 Whatever their genesis, the images did their job.

So too will this book. It could just be the ideal gift for this most unusual of Christmases.

The Home Front – Britain 1939-45, published by iNostalgia Ltd, is now on the sale at the special pre-order price of £14.99 including UK postage and packing.