Slap bang in the middle of the world’s first industrial estate; full of warehouses and blokes in high-vis, you’ll find Six Trees - one of Manchester’s newest and most exciting creative destinations.

Trafford Park’s Village tram stop is an elusive destination that rarely sees a soul get on or off, unless they’re equipped with a toolbelt or a trail of summer holiday infants heading to Depot Climbing. It’s a strange part of the city, only made more peculiar with the arrival of Six Trees back in 2020, a  destination bar, restaurant, club venue and soon to be accessible space for Manchester’s arts community.

The venue was born out of the mind of Sam Oliver who runs GVE, the huge industrial vacuum equipment warehouse that Six Trees sits on the outskirts of. Growing up, he spent a lot of time as a student doing odd jobs and working as part of a pizza joint, where he formulated a passion for good food and good people, but was drawn into the family business that his grandfather began as a young boy.

“This whole space was all started by my Grandad,” he began. “When I finished university I remember him having a stern word with me, asking me to finally start taking things a bit more seriously and join the family business – so I’d made plans to give it a go the following week, but sadly he passed away soon after and I ended up taking it over, alongside my Mum and brothers.”

Typically, a rave den and arts destination isn’t what you’d associate with a greasy vacuum equipment factory, complete with intimidating machinery and an overwhelming smell of oil. You’re more likely to be on the lookout for vintage posters of Pamela Anderson and piles of worn out Timberland boots, but Six Trees had always been in the back of Sam’s mind and everything fell perfectly into place when he met his partner, Tash.

The relationship blossomed as soon as the pair were introduced to each other via mutual friends, and after moving in together during lockdown the Six Trees concept began to manifest in their buzzing, hard to tame minds. “Sam is very hands-on, he’ll give everything a go himself and he, his brothers and I have designed and built the new space from the bottom up all from scratch,” said Tash.

“During COVID, like everyone, we had loads of time to spare to come up with ideas and also a lot of space to experiment with how we wanted the venue to look. We started with the outdoor space and decked it all out, then I began designing the menu and coming up with ideas for the bar and kitchen.”

As much as Six Trees has become a standalone separate venture that shares a space with GVE, but in no way provides the same services, it was important to Sam to continue to focus on the family values that the venue was built on. In the yard next to the main bar, you’ll find one of his Grandad Harry’s original, vintage industrial machines that has been unearthed and restored to its former glory. And on the bar, Harry has his very own beer named ‘Harry’s Will Be A Rita’ not forgetting his beloved Grandmother, too. 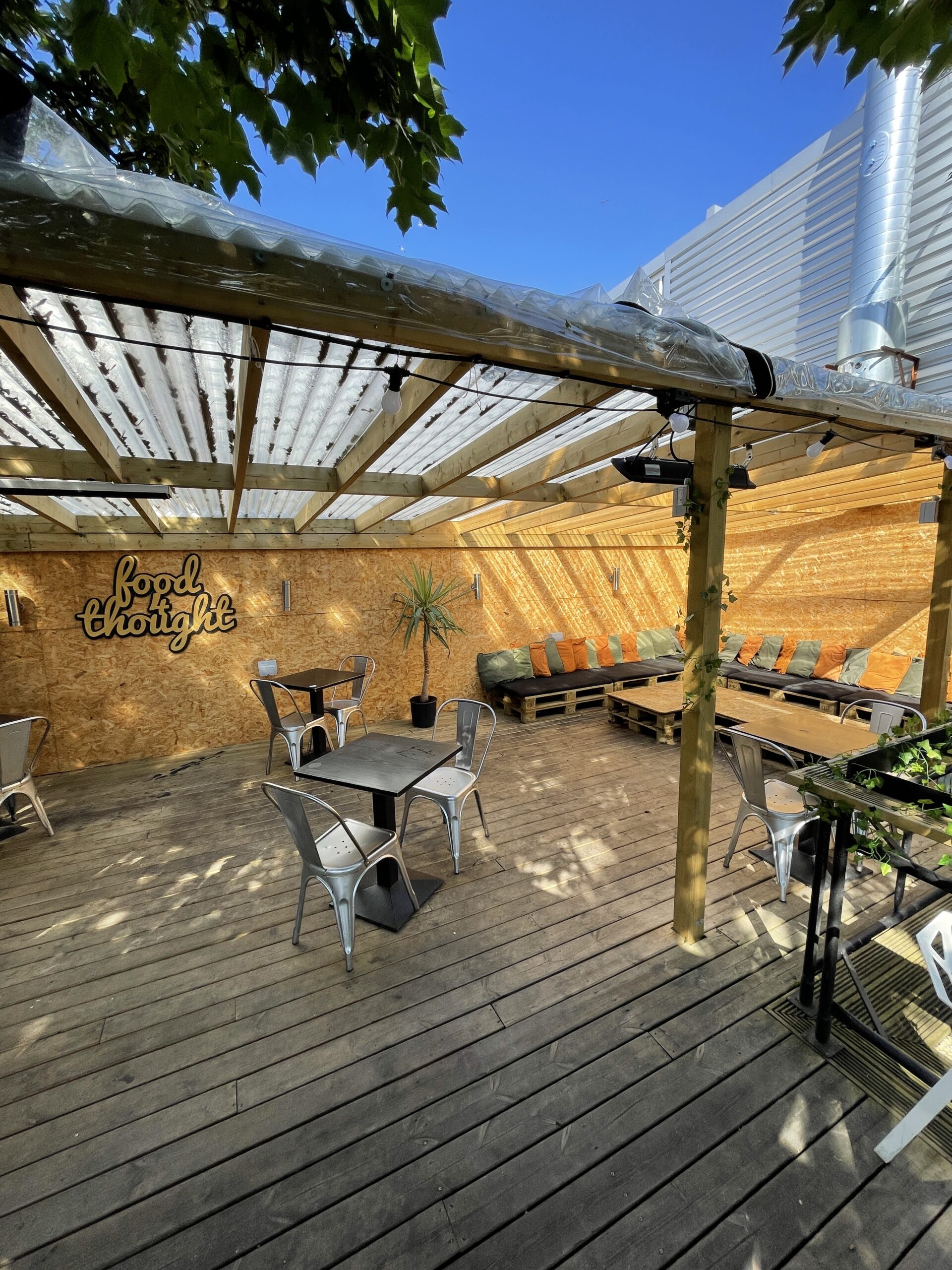 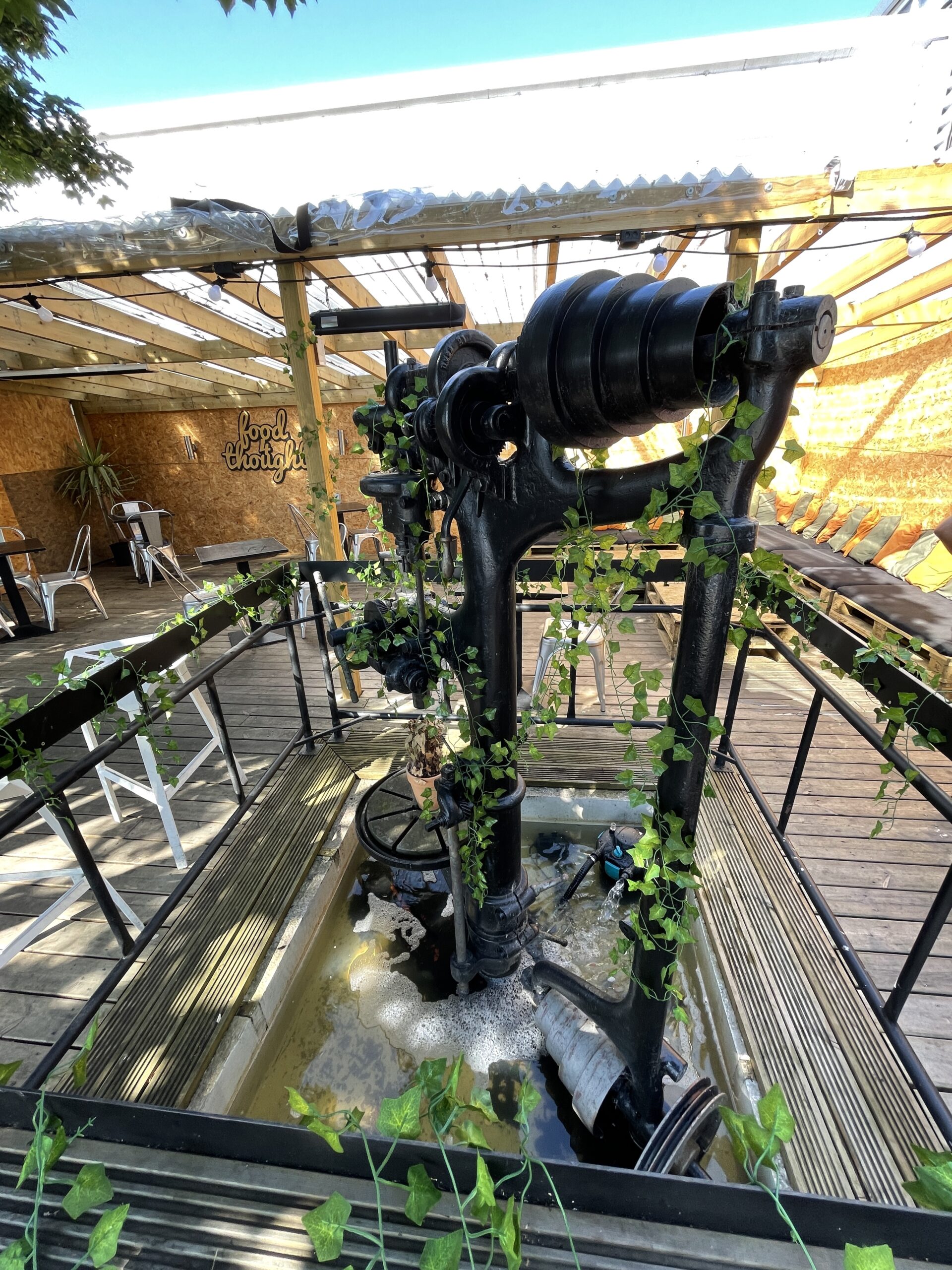 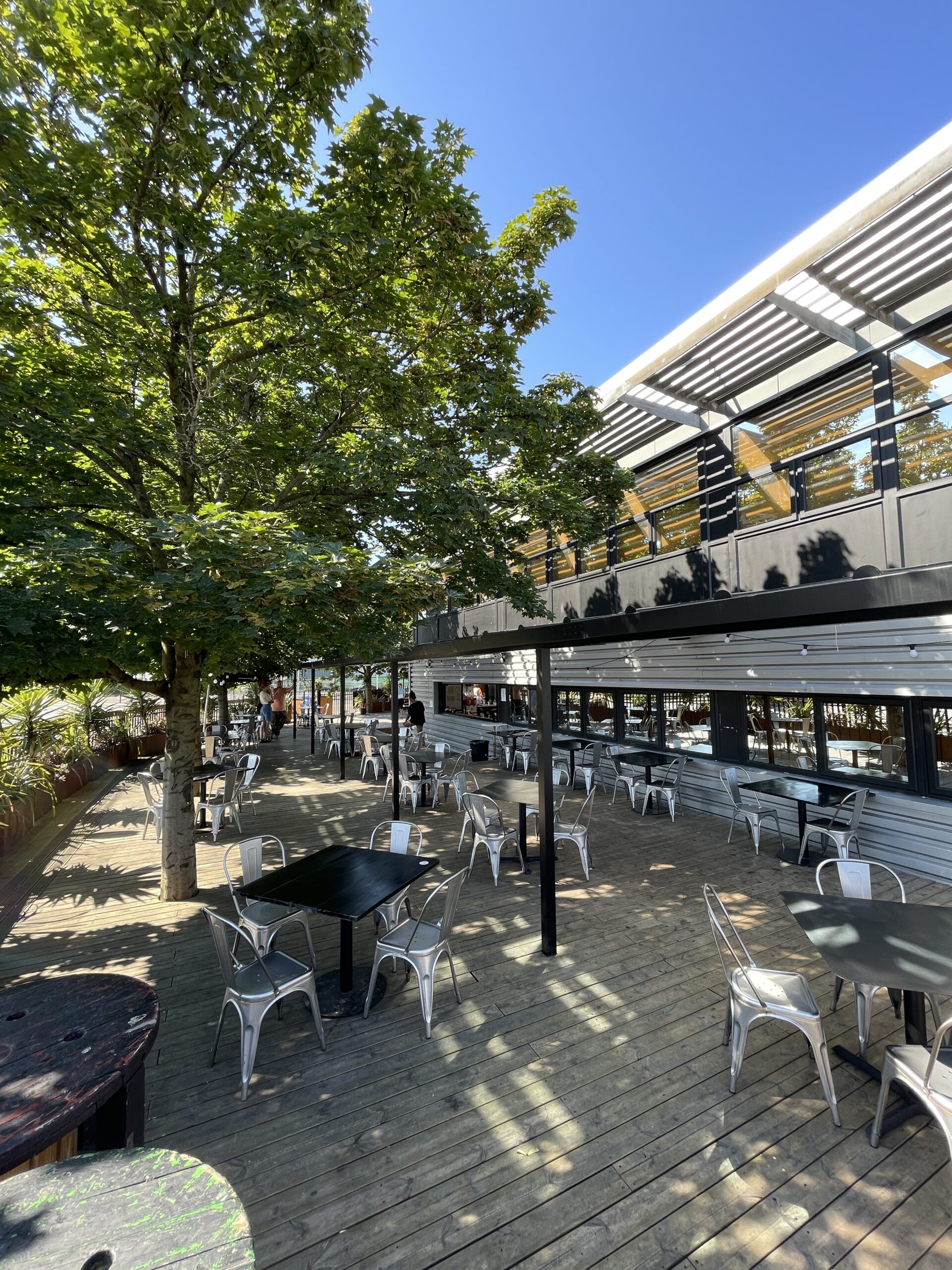 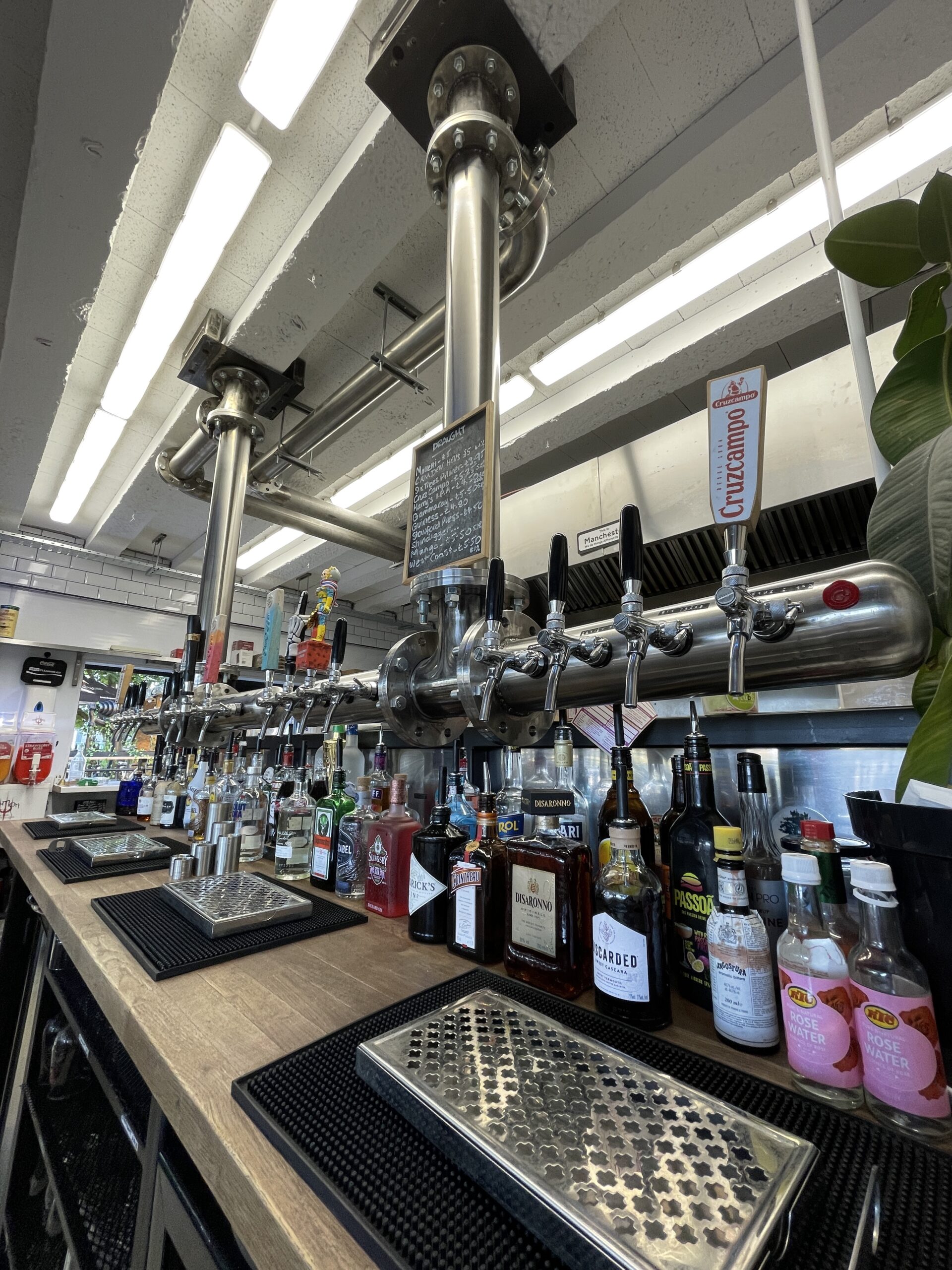 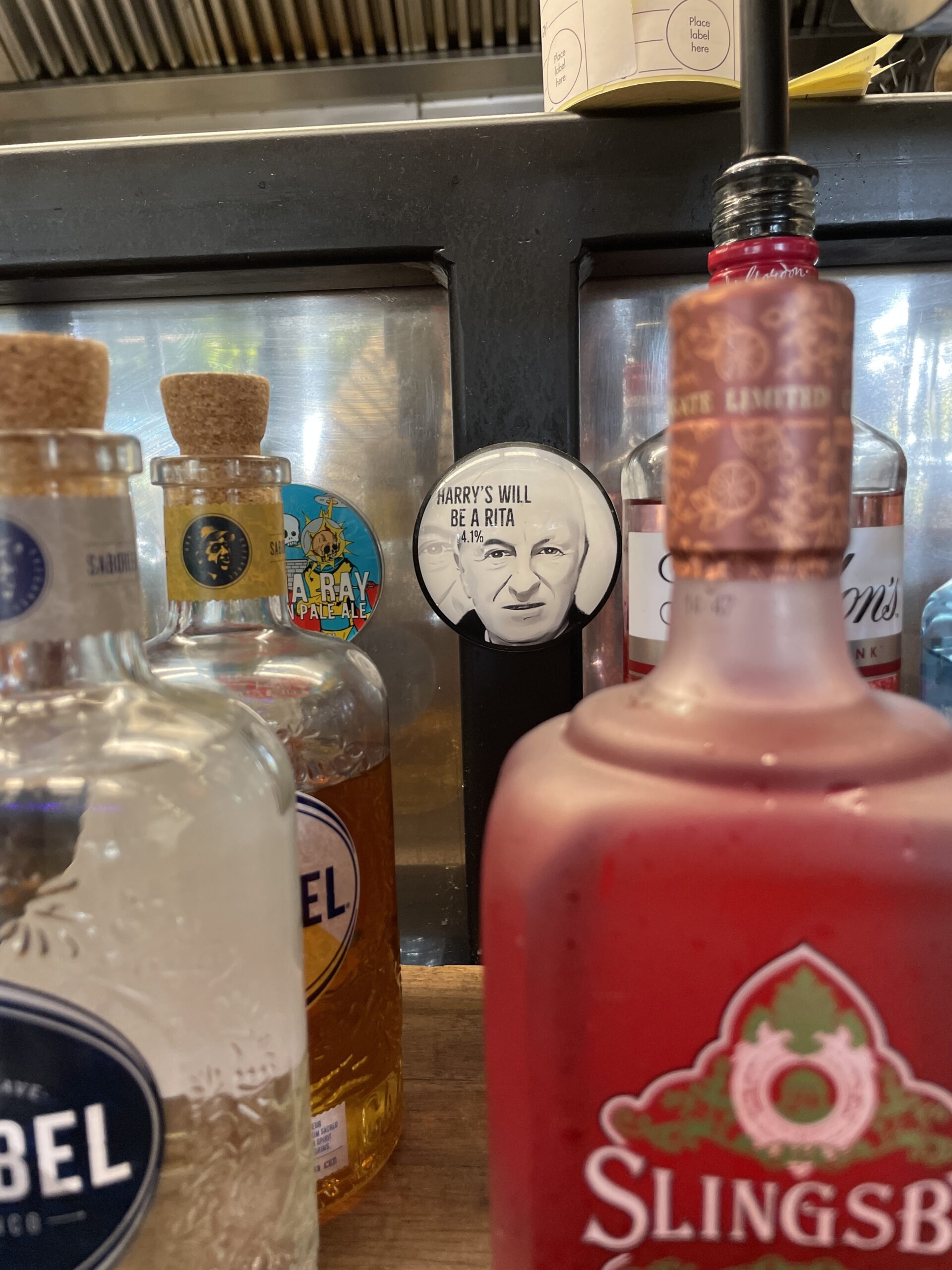 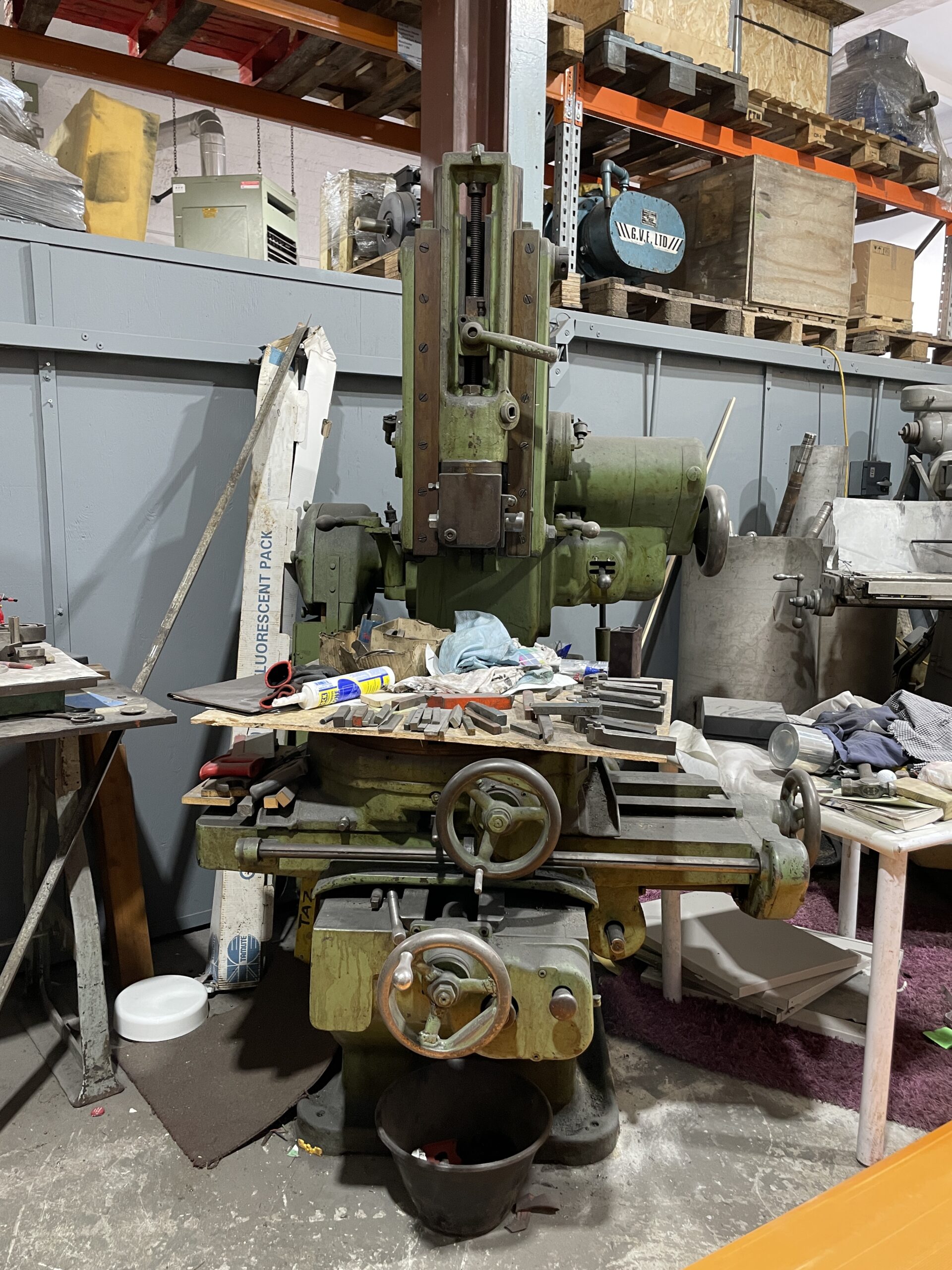 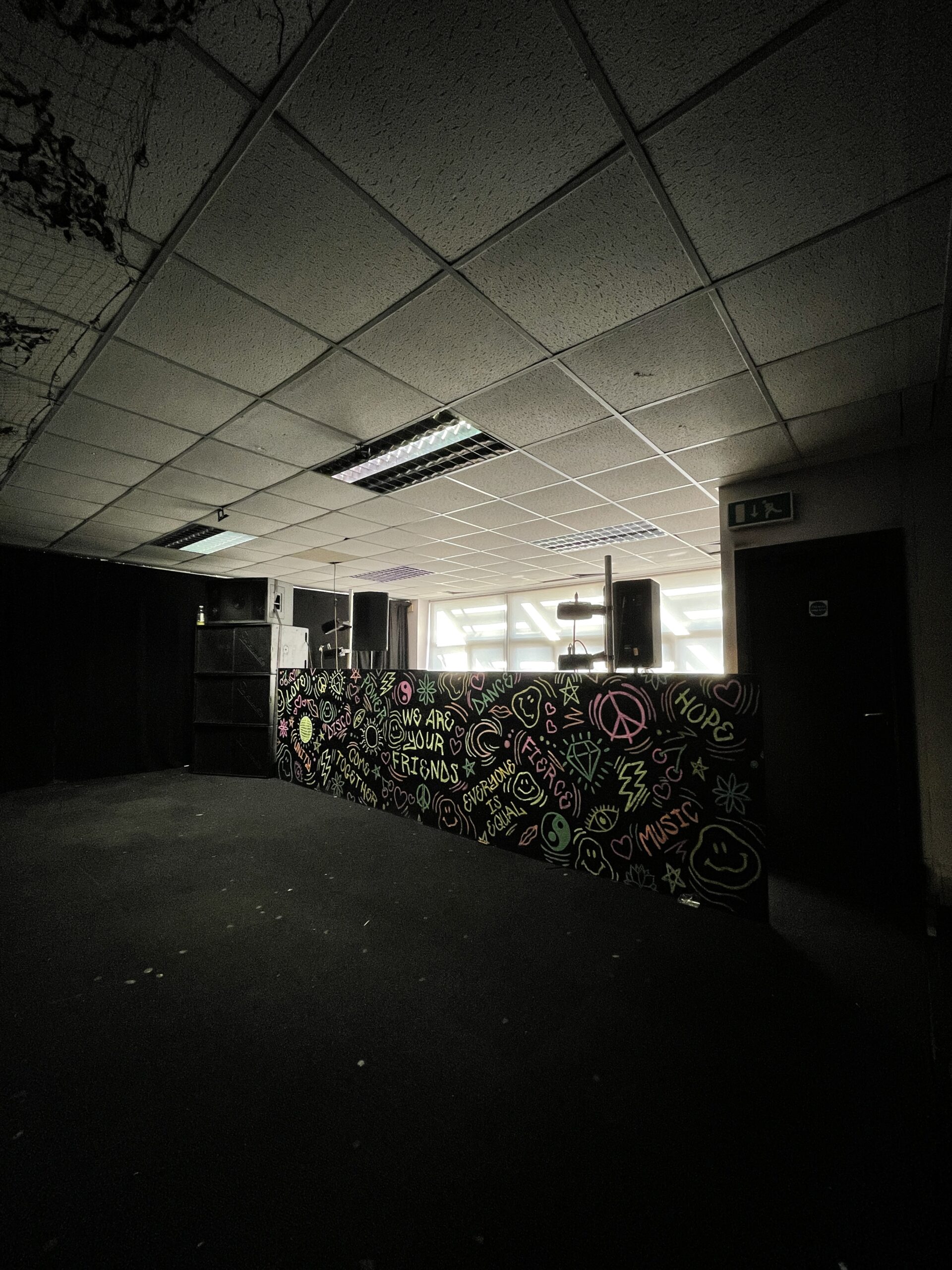 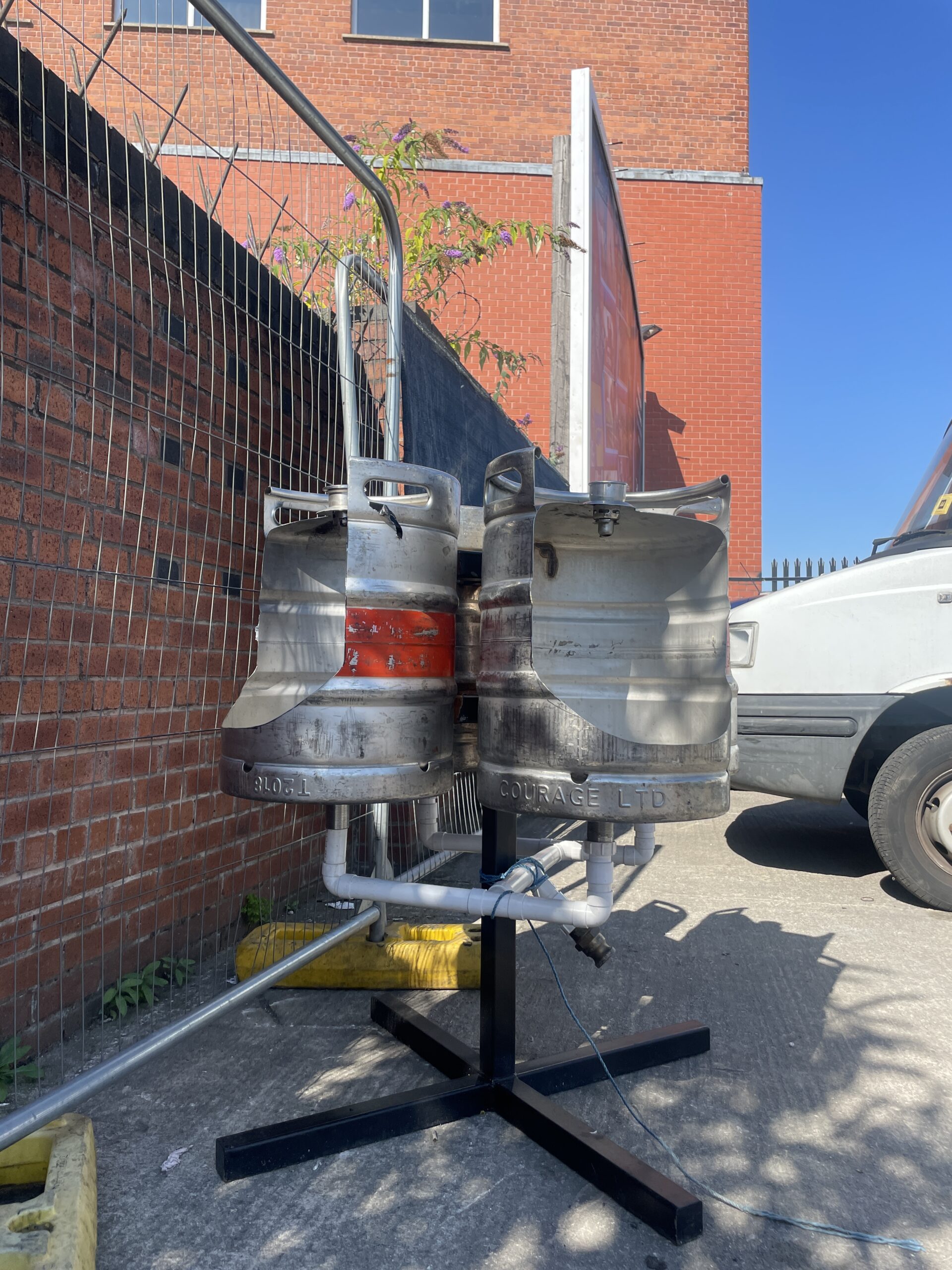 When I ask Sam about what his Grandad would think of Six Trees, he tells me: “He was a bit of a Frank Sinatra type, a traditional man who loved his music, so I think he’d be impressed. Especially with the work we’ve put in and our plans to create a broader creative space that spans all genres of music.”

Six Trees is open Tuesday – Sunday from 9am and serves a menu of LA-inspired brioche breakfast buns with a vast vegetarian and vegan offering, too. We ventured down at the height of the recent heatwave, and sitting out on the decking complete with bright green shrubbery and an open bar was similar to the sinking your first shandy on holiday as a blissful breeze rubs your shoulders – a slice of heaven amongst Trafford Park’s work centric ethos.

At lunch, the place is abuzz with factory workers and Media City-slickers looking to sample some of Tash’s home-cooked food, which features dishes such as the Halloumi Burger – two pieces of deep fried, crispy halloumi topped with Tash’s chilli jam – and the Steak Sandwich is a big hit, too. It’s dripping with cooked-to-perfection flat iron steak, balsamic caramelised onions, rocket, homemade mustard mayonnaise all encased in freshly baked sourdough bread.

But the real buzz of Six Trees usually starts on a Friday evening when Sam dons his overalls and begins to transform the venue’s yard and car park into one of Manchester’s best hidden rave dens.

The duo began hosting parties as a way to collaborate with friends and provide a huge space for a diverse range of nights, complete with a booming sound system provided by Manchester-based AV integrators, Neuron AV.

Subsequently, they’ve seen crowds of almost 1,000 party-goers flock to their unique venue on the outskirts of the city where, since opening, they’ve hosted everything from the coveted Hit & Run monthly gathering, to Sunday ‘Calm Sessions’ which sees a barbecue erected outside in the yard, shisha, drink deals and a line-up of DJs soundtracking the already laid-back, welcoming vibe.

Six Trees also serves one of the best happy hour deals you’ll find in Manchester, with two pints of house pilsner setting you back just five pounds from 4pm – 7pm every day – just another reason to jump on the tram and join the Trafford Park family for an evening of home cooked food, music and drinks.

Six Trees isn’t just an outdoor destination, though, as Sam and Tash led us around the maze-like building full of doors to Monsters Inc portals when we stumbled across a converted old office room that’s also used for parties and live shows. “Me and Tash designed and built this entire space. We were due to hold a New Year’s Eve party here last year, but it was right at the height of COVID and the council had told us we couldn’t run it,” furthered Sam.

“But at the very last minute, we were given the green light and we managed to turn the space around in a matter of hours. It’s become a real mischievous party hideout and another space that we’re really proud of within the venue.”

The space in which Six Trees sits doesn’t stop there as Sam and Tash explained that they have plans to transform more of the space to incorporate dance and theatre, as well as a recording studio / podcast pop-up and a roof terrace that extends from another yet-to-be-opened party room. There’s also a wood-fired pizza oven in the process of being built, by Sam of course, in the venue’s kitchen.

“We never have a day off to be honest,” said Tash. “We’re always thinking about what we can do next and how the venue can grow to become part of the beating heart of Manchester’s creative community. I think Six Trees has breathed new life into the area for sure, and we’re determined to grow and provide a welcoming space for everyone that offers something different to what’s in the city centre.”

What’s on at Six Trees?

Saturday 13th August
Taking over Six Trees this weekend is a huge community barbecue featuring spoken word poetry, rappers, singers and wordsmiths, as well as some of Manchester’s current best musical talent. The event is a collaboration between Sayin?, Manchester’s regular spoken word event and Propatop Records, an independent label with Manchester-based artists at the forefront.

Saturday 27th August
Back with a bang at Six Trees this month, Temple is a night bringing some of the best up and coming DJs and Producers in the minimal house / garage scene. Leading the bill this time round is Chris Gialanze, a DJ and producer using modular sounds to create his distinct tracks. Incorporating these sounds into tracks, his sets are designed to get the dance floor rocking and test the quality of Six Trees’ booming sound system with his heavy hitting grooves.

Friday 16th September
Spread across Six Trees’ indoor and outdoor venues from 9pm – 6am, Red Laser is bringing its heavy duty party to those who dare visit. The Manchester-based record label has hit the bill with Hysteric, a Melbourne-born collector and founder of Mothball Records known for his distinct collection of 80’s synth and disco classics.

Saturday 17th September
No introduction is needed, as Hit & Run has grown to be one of Manchester’s most famous parties. Back at Six Trees with another unmatched line-up, the venue will throw open its doors for an all day collaboration with Calm Sessions, for some laid-back Saturday grooving.

Northern Quarter New-Wave Thai BBQ, DISTRICT, are offering a FREE Bottle of Wine When You Dine in August