O'Donnell's Moonshine was started back in 2016 by three old school friends... 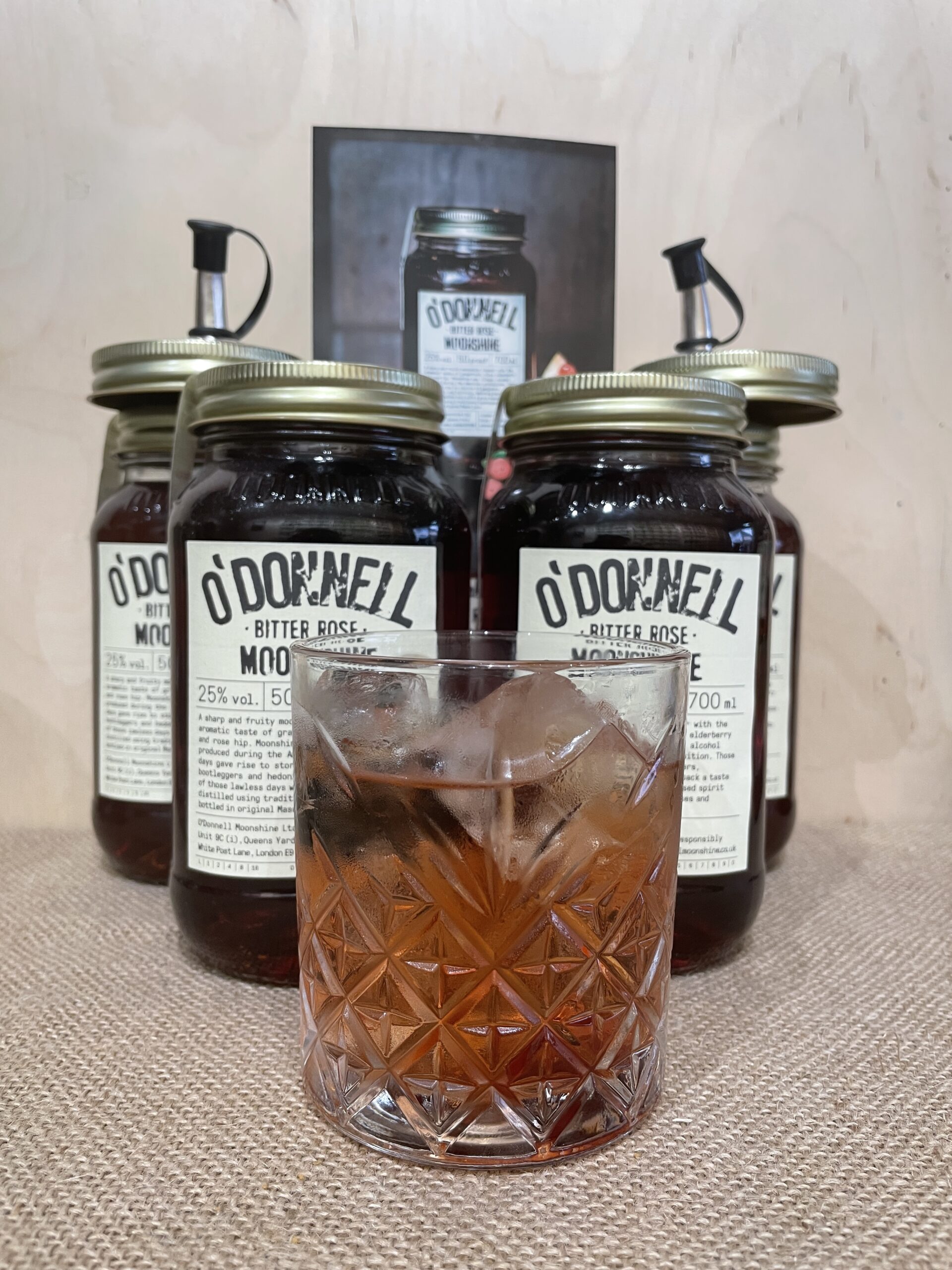 When someone mentions ‘moonshine‘ I’m sure that you immediately think of some dank, homemade booze, or indeed one of those cartoon bottles of liquor with a massive ‘XXXX’ written on the side.

Well, that’s all a million miles away from what modern moonshine is, and Manchester’s very own O’Donnell’s is testament to that. Started back in 2016 by three old school friends, O’Donnell’s is a high-quality spirit, made using the best ingredients – bringing this ancient brew slap bang into the 21st Century. 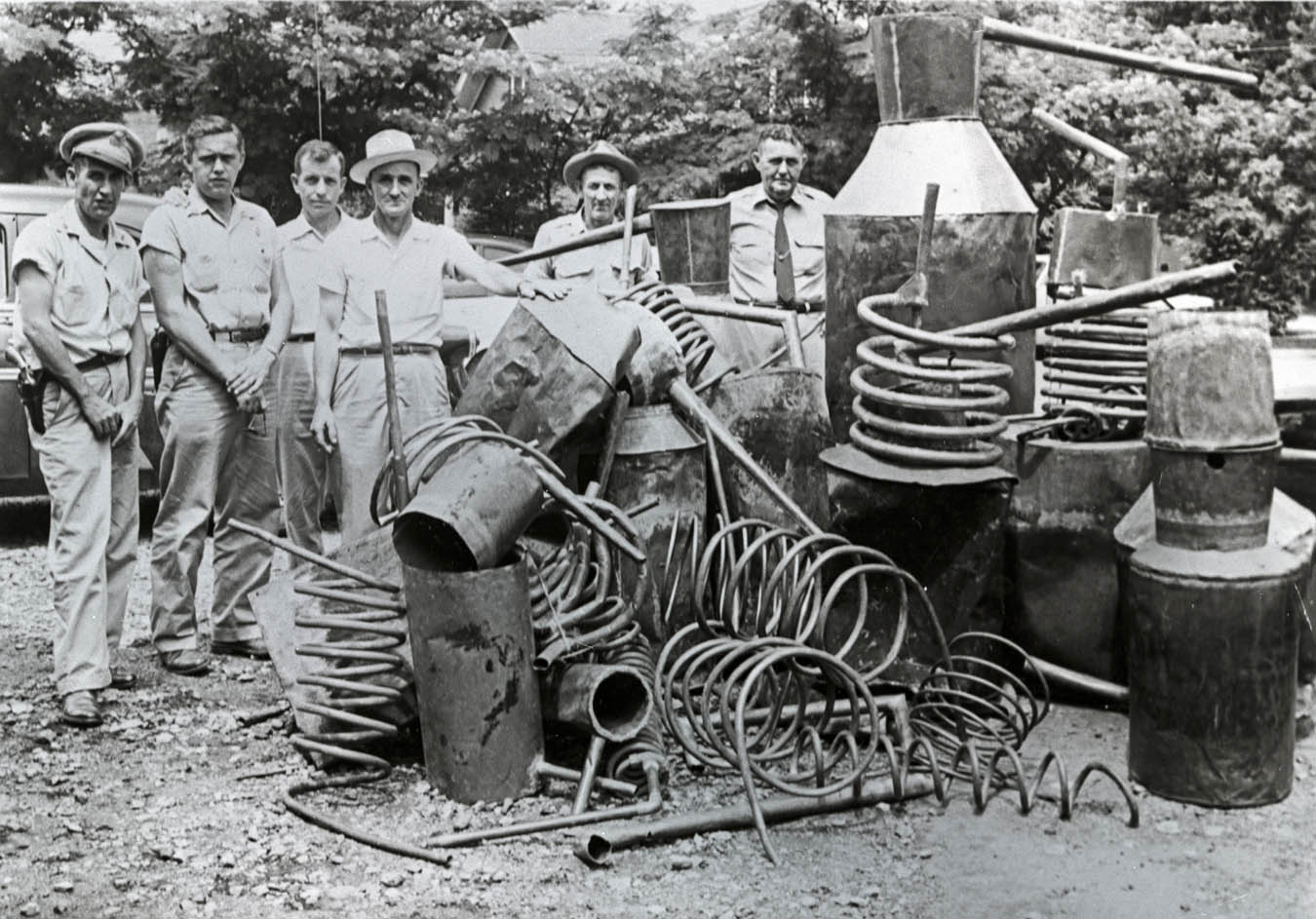 Moonshine itself originates from the Prohibition Era of the 20s, when the sale of alcohol was illegal and people started distilling their own spirits in the middle of the night to avoid the authorities. This drink, made “under the shine of the moon” became known as moonshine and was an instant hit amongst thirsty secret party-goers at the time.

Named after Spike O’Donnell, a famous bootlegger at the time, O’Donnell’s today incorporate authentic 1920s recipes and original distilling methods into their spirit, and it’s 100% allergen free, gluten free and suitable for vegans. 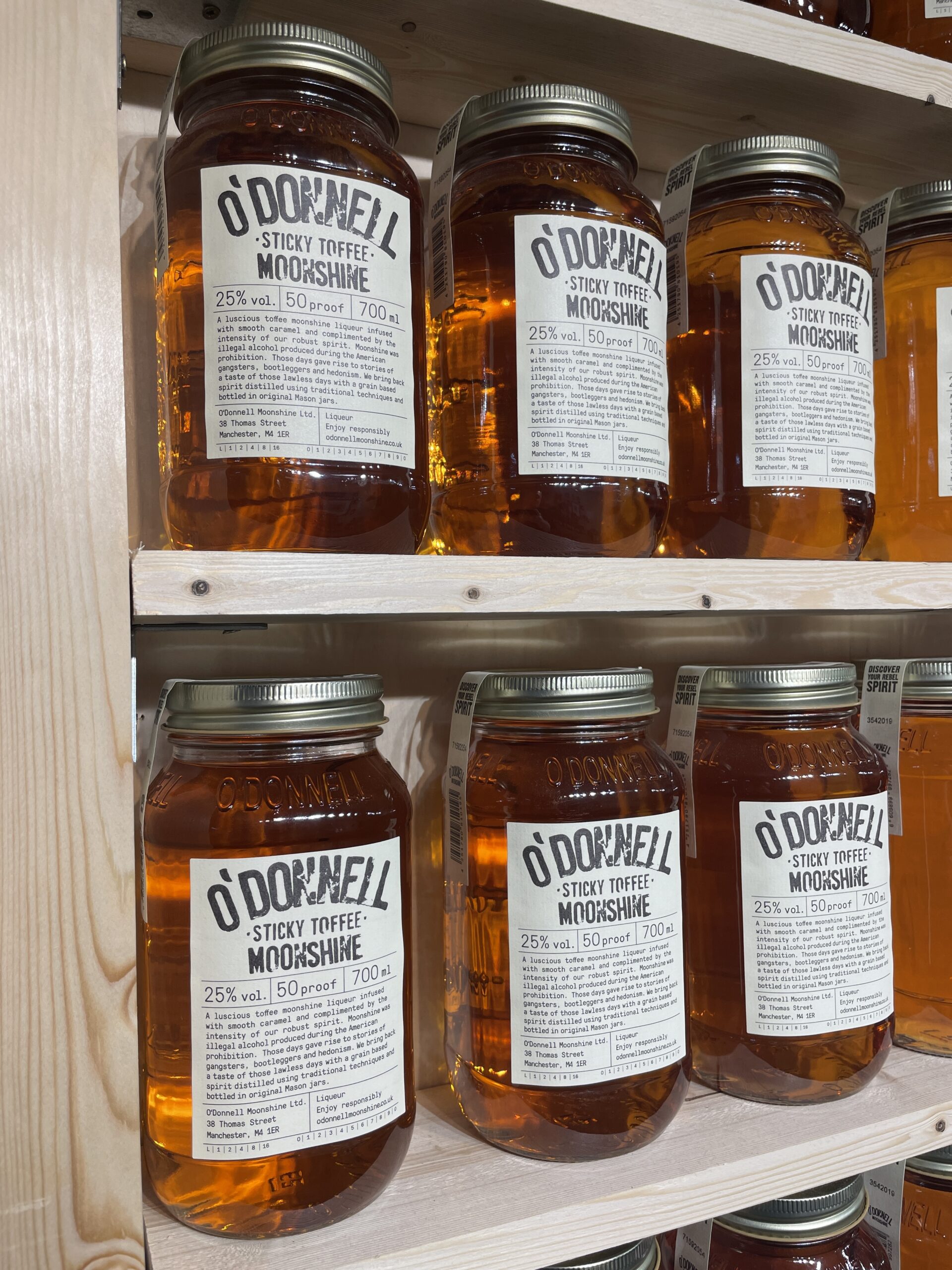 They’ve created 7 flavoured Moonshine liqueurs, such as the Sticky Toffee, Roasted Apple, Lemon Drizzle and my favourite – the ‘Tough Nut‘ which is often compared to a liquid Ferrero Rocher and is endlessly sippable, alongside their signature clear spirits, which will blow your roof sky-high!

Their High Proof (50%) and their High High Proof (72%) are closer in style, taste and strength as you would have found back in the world of Moonshine in the 1920’s and they’re actually an absolute pleasure to drink – despite their high alcohol content. 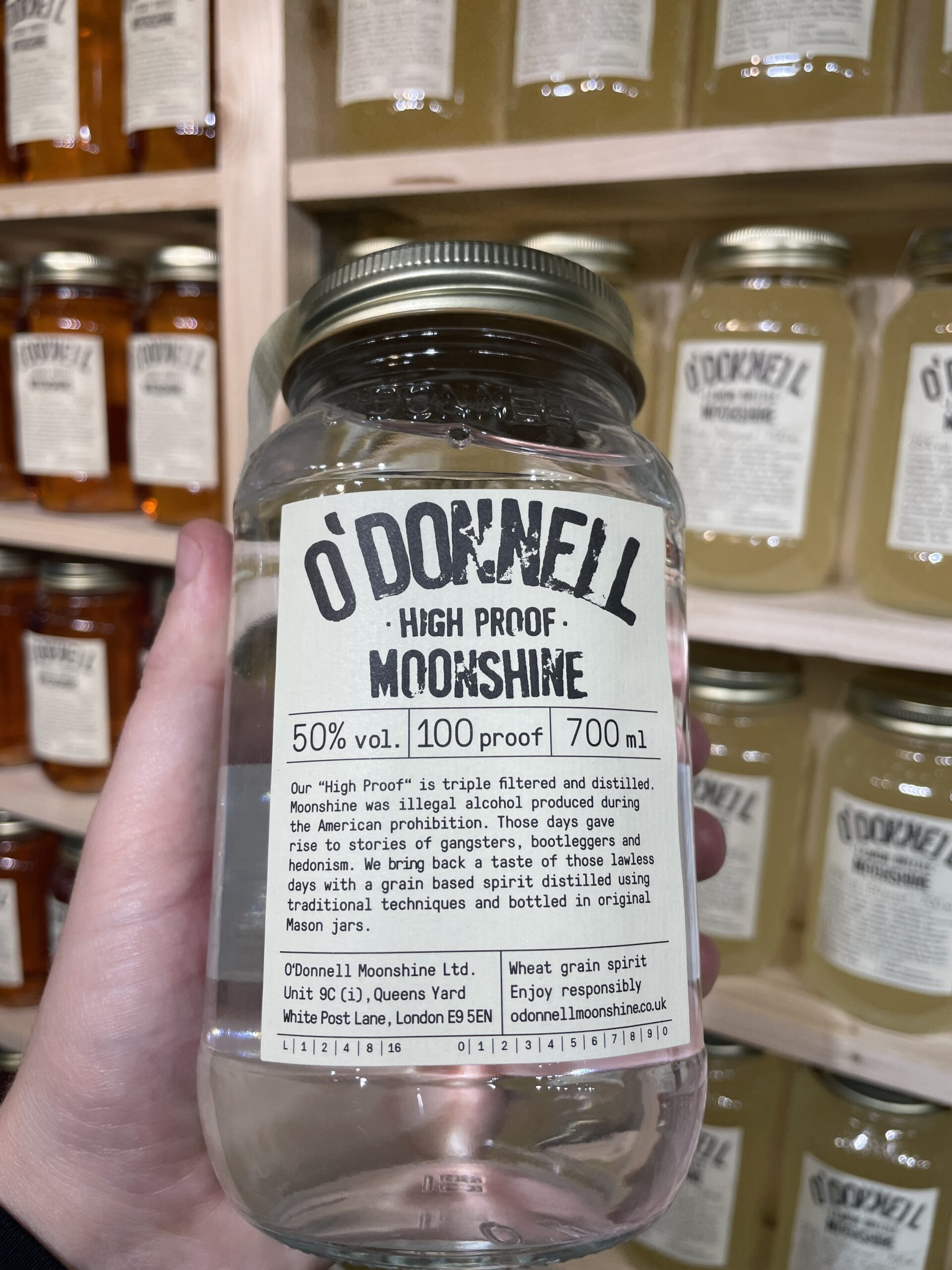 But what do you do with it?

Well, the flavoured liqueurs are extremely versatile, and can be paired with pretty much any concoction of mixers and flavours. The High Proof though? Well, there’s a couple of classics which are just begging to be tried, including a unique take on the vodka martini… 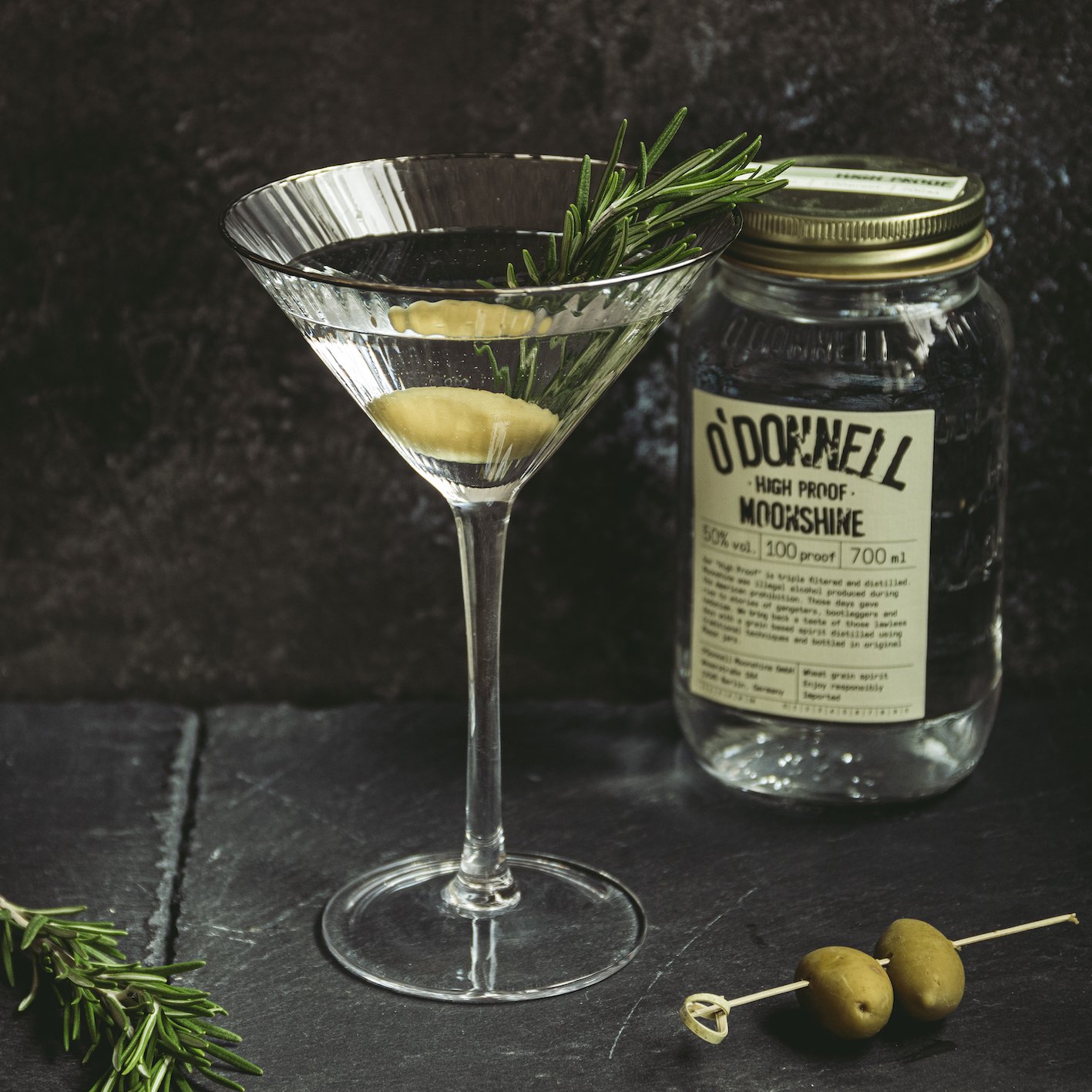 Fill ice cubes into the shaker. Pour vermouth on top and stir with the cocktail stirrer.
Now pour the High Proof into the shaker over the ice.
Stir for half a minute
Pour the drink into the martini glass (without ice!)
Garnish with rosemary and olive

O’Donnell’s website contains a selection of their favourite cocktails and recipes, which can be found here.

In addition, you can also try some O’Donnell cocktails down at Hatch, where they have their very own store where you can sample the moonshine and order some drinks from the bars down there. I highly recommend the ‘Birthday Cake’ from Miami Ice – it’s proper banging! 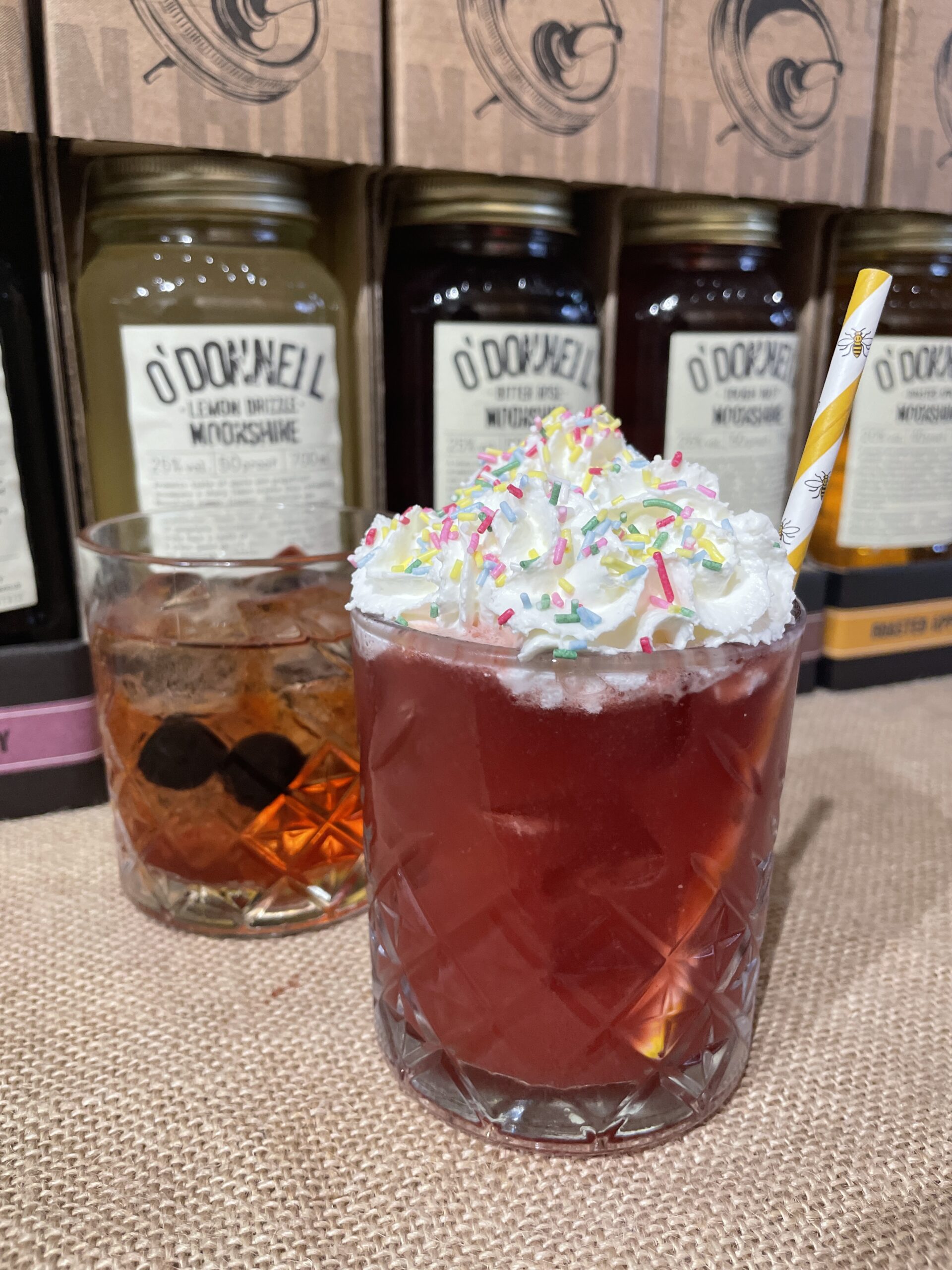 So, if you’ve never tried moonshine and want to see what all the fuss is about, head on down to Hatch to give it a try, or pop onto their website (below) and order yourself a couple of bottles and have a very boozy weekend…

Why Manchester’s SVMI is One to Watch