One way or another Ancoats is on everyone's lips at the moment, but the city centre suburb's newest spot takes its name from the area's original appellation, Elnecot.

The intriguing list of small plates and busy open kitchen suggests food is the main event here, rather than booze, although a lengthy prominent bar implies otherwise, it’s the sort of place you wouldn’t feel awkward ordering only drinks. One corner sports a bright neon ‘Toilets’ sign that would be a lot more useful to me when staggering around after a skinful than to illuminate date night.

Date or not were here to eat though. Our appetiser was a nice metaphor for the meal as a whole which used a number of unloved ingredients to create some really special dishes.

So as I say it turns out maybe you can make a silk purse from a sow’s ear, at least if the crispy pig ears with tartare sauce are anything to go by. Those salty little slivers of swine make for a brilliant bar snack, especially alongside the fresh, pickle dip. Throughout the meal carrots were a little ever-present for my liking, certainly in the dishes we chose at least, but in truth their versatility was well demonstrated as they were deployed successfully in a number of different ways.  First up a salad with caramelised chunks of the root veg nicely sweetening tart goat’s cheese curds, coriander shoots and sprinkling of pine seeds.

There’s a section on the menu made up of balls so we picked a pair. Speaking of which, as it happens sweetbreads are also served, though unfortunately they had sold out on our visit. Instead we tucked in to the pearl barley arancini. I’m not always the biggest fan of the grain but was well impressed by these, flavoured by fragrant smoked haddock the grain worked a treat in place of the more commonly used risotto rice. They were another example of imaginative and inventive cooking using the cheapest of ingredients. Our other balls were of the meat variety, and came in a classic tomato sauce. Rather than the usual beef or pork mince these used sausage meat which lent them a very succulent texture and flavour.

Who knew you could buy British burrata? The delicious, creamily centered version of mozzarella is worthy of a plate to call its own and really impressed alongside the roasted sweet crunch of carrot tuile and an earthy pea puree. Peak carrot was reached with our next dish but I was too busy with the pork belly to notice. Crunchy, fatty and glistening in all the right places, if you get it right the cut can be tough to beat.

And if you want to see another expertly seared morsel look no further than the pollock. Lightly spiced then charred eye-catchingly well, the flaky moist fish excelled- another modestly priced ingredient celebrated to it’s potential. Our final savoury plate brought a slow cooked ox cheek braised in pale ale. For me it was a little light on seasoning it but the gelatinous texture was perfect and the chimichurri pesto perked things up a bit.

I love a lemon posset, but in truth found this a bit disappointing. It was a bit heavy and had a layer of jelly that didn’t quite work for me, the shortbread biscuits were a touch stale too. Much better however was our chocolate fondant which oozed as required and made a fantastic accomplice to my chocolate negroni- a lovely boozy cocoa infused tipple on as a special that need promoting to the menu proper.

When it comes to the expansion and gentrification of areas like Ancoats, noses are often turned up at new places with inflated prices offering style over substance. It would be easy to expect Elnecot to fit in to that narrative, and it should be said that the quality of the food is probably high enough to add a few quid to the property boom in the area. But what is exciting is the use of cheaper, less obvious ingredients like pollock and pearl barley, it keeps costs down but also goes to show what can be done with a bit of skill and ingenuity. There’s some really interesting, expertly prepared dishes on offer for the price of a pint and I can’t wait to see how Elnecot develops. 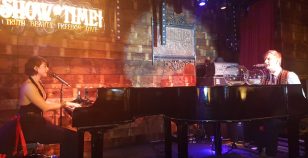 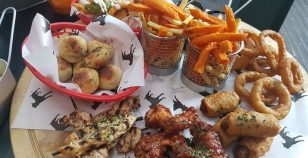