Spinningfield’s and indeed Manchester’s latest restaurant experience Neighbourhood describe themselves as ‘a New York eatery and Bar inspired by Manhattan’s definitive Neighbourhoods’. And from the outset it’s fairly clear to see where they’re coming from, designed by the award-winning designer Edwin Pickett. Neighbourhood blends warehouse-chic with a touch of class.

I headed down there this week for the first time, a little late I know but I got there in the end. So, first things first a drink at the bar and with American World Class Beer; Samuel Adams on tap if you’re a beer lover like myself you’re not going to go far wrong.

Neighbourhood is split over a couple of floors and a few different levels, I love this about the space, it adds a really nice sense of adventure whilst creating pockets of more intimate dining experiences with booths an option alongside the more open plan feel.

The idea behind Neighbourhoods Starters and Appetizers is to share, each come in portions of 3 or 4 and encourage interaction and conversation of your meal, it also avoids food envy! We opted for the Lobster Tacos and the Crab filled Oyster Shells, both hitting the mark on taste and presentation. For mains we had the Neighbourhood Burger which was excellent and the Fillet Steak which was a fantastic cut and the knife (in it’s self a great piece I might add) just glided through it. We opted for the mini donughts with melted chocolate & marshmallow and the Cookies and Ice-Cream for dessert .

Honing their unique take on casual fine dining, luxury ingredients & industrial chic aesthetics in the newly developed North Avenue; Neighbourhood anchors the development at that end of Spinningfields and certainly sets a design precedence for their neighbours of the future to aim for.

Spearheaded by James Hitchen, the man who created Southern Eleven, also at Spinningfields said: “I am thrilled to be finally opening Neighbourhood on Avenue North. I really wanted to make the restaurant as authentic as possible, so everything from the lighting, the decor and the seating arrangements to the flavours and ingredients have been carefully chosen to give the restaurant that New York feel.”

Dinner over we opted to try out the Dom Jones Briefcase, a must if you are a fan of an Old Fashioned. It was a great end to the evening mixing our own Whiskey and Bitters with the briefcase bringin that added touch of theatre. 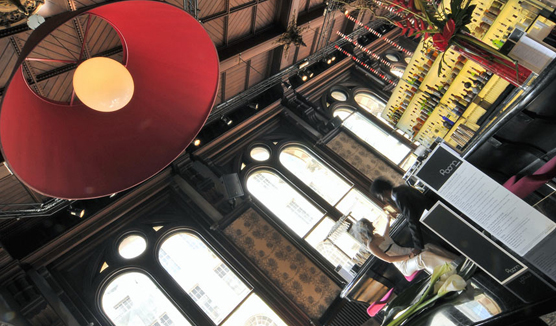