The Oast House, with the help of Aspall and cider lovers from across the country have claimed yet another Guinness World Records achievement during their ‘Largest Cider Tasting Event’ . The first comes from their success at hosting the ‘Largest Beer Tasting’ back in 2013.

It was thirsty work for the 255 people who came to join in this mammoth team task, which took place at The Oast House Courtyard, Manchester on Wednesday 6th September at 6pm.

It’s no wonder that Brits consume nearly half of all cider produced worldwide with facts like these surrounding the popular tipple. Over 130 gallons of cider is produced in the UK alone per year, and 45% of all apples grown in the UK are purely for cider making.

Kieran said “Manchester have always had a strong love of cider and this event was no exception in demonstrating support for Aspall, we had a fantastic turn out and easily smashed the Guinness World Records title”

For more information on the record breaking cider-ness, click here.

Coffee Shop ‘Another Heart To Feed’ launches ‘After Hours’ 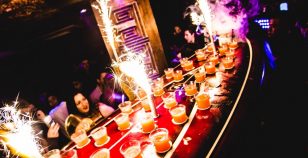