WINTERMÄRCHEN: The greatest show of all, Mein Liebling

If there is one thing the German language does not struggle with, it is having single words to describe a multitude of themes, feelings and expressions. Wintermärchen for example means a dark winter fairy tale, or the expression or colloquial term used to describe the perfect winter’s day.

Taking this as their inspiration, the Albert’s Schloss entertainment team have curated their finest ever programme; from extreme dark cabaret to exclusive live performances, Wintermärchen cocktails, touring bands, duelling pianos and burlesque debauchery…seven days a week starting on 10th November.

Monday’s will feature the effervescent sound of Jena and the G’s Takeover, so expect an electric atmosphere Manchester’s No.1 songstress and her very own band.

Wednesday’s hand over to Baby Grand Slam, one stage, two grand pianos and endless requests, and Thursday’s will jump to specially curated touring bands performing live on the Schloss stage, the perfect precursor to the impending weekend.

Wintermärchen continues into the weekend kicking things off with an energy that, simply, must be seen to be believed, Freitag, featuring the legendary Haus band and resident entertainers. Haus Boheme turns up the Christmas heat on Saturday’s with a multitude of resident musicians. To bring the seven Days of Albert’s Schloss Christmas to a weekly close, Sunday Service gives you the spectacular Cook Haus Roasts and alpine-inspired winter menus, roaring fires, live Motown choirs, DJ Paulette and Will Tramp providing a diverse soundtrack from the booth.

Forget about the naughty list, missing out on such splendour ought to be your chief concern thus Christmas.

Free Tapas with Every Drink with After Work Friday at Sandinista 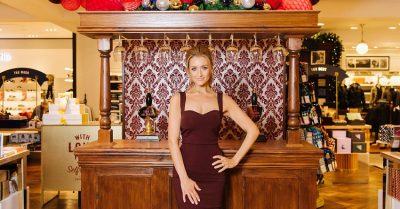 A Pub? At Selfridges? Yeah, you heard us right…