I drank all of Eat New York’s new cocktails because they’re 2-4-1. Here’s how I got on…

There's a new cocktail menu in town and you can get them 2-4-1 everyday from 5pm!

Not only do the gang at Eat New York make quite possibly the greatest sandwich in the city in the guise of their phenomenal monster Ruben, but they’re also massively into their cocktails.

They’ve recently launched a brand-new cocktail menu, with a great 2-4-1 offer every evening from 5pm – 10pm. They’re inspired (as you’d expect) from New York – home to some of the most recognised drinks in the world. The martini was made there, as well as the daiquiri, the margarita and even the old fashioned. So they’ve got plenty to go on – but are they any good?

Well, purely in the interests of the good people of Manchester (and science of course), I went down on a Wednesday night and tried as many of them as I physically could. Here’s how I got on. Drink responsibly please.

Like most pleasures in life – I started at the top and worked my way down.

Clover Club Soda
Made with gin and raspberries, I certainly started on a winner. The Bombay Sapphire Gin and Lillet Rouge (a French aperitif) go together to create an ultra-bitter sap that is then perfectly offset with the raspberry, lemon and soda. It’s very fresh and will make you want to order another one straight away.

Bagel Shop Punch
The simplicity of this punch is certainly one of its most impressive attributes, with just two ingredients coming together to create something pretty special. The base of the drink is that dead nice Duppy Share rum, which seemingly goes perfectly with everything. On this occasion they pair it with a homemade peach ice tea that pretty much ensures that you don’t think you’re actually drinking booze. But you are – big time.

Two down and I was feeling fine, enjoying the old school hip-hop and watching plenty of lovely bagels getting handed out to seated diners. Eating is cheating though so I decided to enter a grey area…

Strawberry Cheesecake Milkshake
This one is a bit of a wild card but perfect if you’re hungry but just want to drink. I decided to tuck into one of the brilliant milkshakes on offer and (of course) add some booze to create a pissed-up dessert masterpiece. By the time I reached the bottom of this rather tall glass I was satisfied both because it was super tasty but also because it was fucking huge. They also offer Apple Pie, Rocky Road, Biscoff & Banana and Reece’s milkshakes – all of which you can add whiskey or vodka for an extra £3.50.

Candy Scoop
This is like something out of a Willy Wonka wet dream – featuring a sweet, sweet cream soda cordial, lemonade, marshmallows, strawberry and watermelon. Basically it’s like someone has poured a couple of bottles of Finlandia vodka all over a sweet shop, poured it into a glass and added sprinkles. If you’ve got a naughty little sweet tooth – you’ll be in heaven.

That was a lot of sugar there. And a lot of cream. So by now I was more ‘buzzing’ than drunk, much like a kid at a birthday party who’s eaten too many sweets and has started skidding on his knees on the dancefloor.

South Side Tonic
Eat New York have taken the traditional South Side cocktail – featuring gin, lime and mint and added some tonic and almond to make it into a long drink that’s perfect for a cheeky summer’s eve after work. It’s very reminiscent of a mojito, with the mint infiltrating all aspects of the experience, but the almond and the gin make it much better, in my humble opinion of course.

Toasted Marshmallow Manhattan
I’m not usually a fan of coffee but I could certainly find myself making an exception in the case of this brilliant Toasted Marshmallow Manhattan. They get two kinds of Woodford whiskey (rye and bourbon), mix it with the now familiar Lillet Rouge and add an espresso shot to create something that will whisk you away to sitting around a fire at fat camp, telling ghost stories and secretly scoffing marshmallows when the camp leaders aren’t looking.

Brown Cow
Certainly one of my favourites on the menu, the Brown Cow is very simple yet very effective. It’s basically a root beer float with a load of Jack Daniels in it. Right up my street this one – I’m pretty certain that this will now be my go-to drink from now on. Until I get diabetes or my teeth fall out that is.

By this point I was pretty sozzled – talking my usual shite and obviously spitting a bit with every ‘P’. My notes at this point are illegible – so these next few might not make much sense…

Apple Pie Tommy’s
Looking to continue the ‘food as a drink’ theme, Eat New York have created what is essentially an apple pie margarita – complete with El Jimador tequila, lime and an apple pie agave. When asked what the apple pie stuff was I was told that it’s basically some agave syrup with cinnamon and apple added – giving you that characteristic apple pie taste we all know and love.

Maple Pancake New York Sour
You can certainly see what the lads at Eat New York have tried to do with this one – create a drink that tastes just like a big massive pile of pancakes coated in maple syrup. Well, I’ll have you know that they’ve pretty much cracked it – with a list of ingredients that, although long, all seem to work perfectly together to hit the spot. The banana and egg whites give you a slice of pancake while the addition of maple syrup tops it off perfectly. Just like the real thing.

Yeah so….I was rather inebriated by now… but very, very happy. There’s some real winners on the new menu, the gang at Eat New York have certainly spent a lot of time and effort to come up with some real unique drinks that you’re not going to find anywhere else. 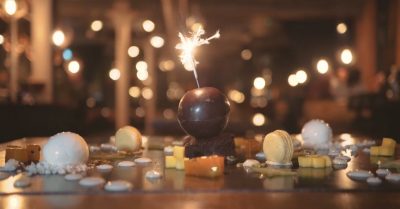 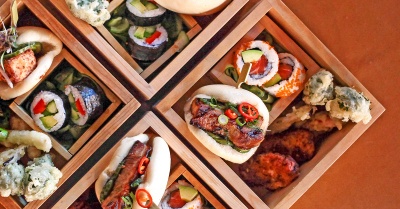 The Traditional Japanese Lunch with a Mancunian twist at Cottonopolis