Playfully Authentic: Wood’s New Taster Menu is a Glorious Homage to the North

Simon Wood and team distil familiar flavours into innovative and highly complex dishes, paying homage to the past, future and present of dining in Manchester.

I’ve been blissfully unaware of whatever’s happening with my dining partner for a few minutes now. You might call it beef blind — gorged almost to the point of shuddering uncontrollably with every mouthful of malted grain loaf soaked in a dark, meaty sauce, so dense it sticks tongue to the roof of mouth in the best possible way. Reluctantly, I open my eyes and step back into reality.

The closing moments of the culmination of Simon Wood’s new taster menu at his celebrated First Street restaurant, Wood, before the dish in question was devoured: it came with an appropriate name — Some Beef, Its Bones & Whey Soured Onions. The idea being to use every part of the animal; flat iron sirloin sits centre stage, humble onions cooked in buttermilk offer a sharp, tangy counterpoint to a gravy that doesn’t let up long after our table has been cleared. Although that might also be the ring of dripping-fried bread topped with bone marrow, grated heart, and tongue. It’s difficult to tell when you’re this overcome with joy.

In many ways it’s lavish and extravagant. And, considering this is served as part of an extensive nine-course taster menu, it’s also generously proportioned. But scratch the surface and you realise this posh beef roast epitomises the overall concept here. As chef explained when we first arrived, the idea is “classic flavours served with playful authenticity”, capturing familiar tastes in highly innovative ways.

An hour or so earlier our first impressions should have prepped us for how complete the experience would be. Arriving to a Rhubarb Collins poured with accompanying amuse-bouche, including asparagus and duck egg with truffle emulsion, cured meats, salt-baked celeriac and onion ash, the highlight is unarguably the Owd Yonner and Onions. Taking its name from a not-so-polite term for Oldham residents, these bite-sized morsels pack a serious punch with 12-month aged clothbound Lancashire cheese and Roscoff onion consommé turned into jelly on a shortcrust pastry base. A refined way to recreate the wonder of a packet of cheese and onion crisps.

Once at the table, what’s best described as a punchy Green Mary virgin cocktail arrives. Labelled as Spring’s Water, it’s a veritable meal in a glass of broad beans, pea pods, dashi, green Tabasco, and cucumber. The efforts made to produce minimal waste become more apparent a little later when we reach the Best Part of the Chicken, an early-menu dish where fowl with perfect skin meets madeira-glazed lamb, hen of the woods mushrooms, and a vibrantly colourful bed of vegetables, including the peas from the pods we drank earlier.

My companion, a pescatarian, gets similar flavours with the focus on the fungi which more than lives up to its name. The Orkney Scallop, Sea Vegetables and Foam is next, marking the point at which our two menus part ways, although not before the best jacket potato that’s ever touched my lips. An extra that comes with a small surcharge, full details would be spoiling the surprise. But believe it’s a more than worthy addition.

Orkney Scallop with Vegetables from the Sea, Foam

Egg Ham and Chips is another case of recreating the traditional. Hen’s eggs are sourced from Cackleberry Farm, home of the rare, organic-bred Arlington White, famed for rich yolks and therefore also flavour. The pork hails from close to this writer’s homeland, Porcus People in the West Yorkshire market town of Todmorden. The juniper and thyme cured coating has apparently been rendered for 12 hours, and the generous dusting of powdered vinegar on the upmarket chips is offset with a topping of duck egg salt and seasonal truffle. Meanwhile, the non-meat side of the menu offers Wye Valley Asparagus with Truffled Yolk and Spring Greens, which is as delectable as it sounds.

In and among all this we can’t help but notice staff include the incredibly experienced and attentive (thank you, Jonathan), alongside visibly young servers. The latter are encouraged to watch dishes being prepped in the open kitchen, immersing themselves to build knowledge, confidence, and passion. It’s a small but notable approach that helps add to the surprisingly informal atmosphere of this fine dining establishment and reiterate the notion that everyone here is working towards a shared goal. Specifically, the unrelenting enjoyment of their customers.

The courses stack up, but we continue to find room, just, with the pescatarian banquet peaking — in savoury terms at least — on Lacto Shiitake Porridge, Variegated Kale, Bramley Apple and Crosnes. Again, it’s a case of fresh flavours celebrating tastes that invoke this corner of the world at this time of year, all of which come alive in the mouth. A counterpoint to the aforementioned beef heaven I’m in, we are eventually reunited for a double helping of desserts.

First up are the Exton Rosé Strawberries, Buckler Sorrel and Cereal Milk, the latter made with honey from Heaton Park to help us revisit memories of swilling semi-skimmed at the bottom of a breakfast bowl post-Sugar Puffs. Incredible as that is, the real gem is the Brown Butter Artichoke with Black Apple, a deceptively complicated delight we’ll let the expert explain.

“The final dessert is potentially the most complex thing on the menu because of the time it takes to make it. There’s the Umeboshi, which is made with lacto-fermentation, the tonka bean is running through there, we make an artichoke crumb, so you have vegetable in a sweet dish. That’s made in butter, which we save for a powder, which goes on top — powdered butter that tastes like artichokes but because the sugars have been released there are also salted caramel notes. With the black apple, we take skin from the lacto-fermented plums and dry them to make a sherbert in a nod to when I was growing up,” says Wood when we speak.

The food itself reflects the past, present and future of eating in and around Greater Manchester but accompanying wine flights break from this. Opting for one Seasonal and one Iconic pairing, the former gives a chance to explore lesser-known grape regions, the latter sticks to exceptional classics. Guided by master storyteller/sommelier James, we head to Spain for a Blanc de Noirs from Raventos I Blanc, possibly home to the country’s first cava with roots traceable to 1497. The white from an island off the coast of Croatia makes us thankful local vineyards have now recovered from the ravages of vine disease. Ruby fruits punch with every sip of Israel’s kosher Segal Levant Argaman, while the depth of Karmrahyut red from Armenia conjures the patient history of a country boasting the oldest traces of wine production on the planet.

Both a British and global odyssey that truly satisfies all our senses, it’s capped off with a trip to the Sweet Shop — a table-top chest of drawers packed with varieties of what some of us once called spoggs, only with extra elegance — completing what’s best described as an amazingly coherent, well-conceived and expertly executed culinary adventure. It excites and challenges, while ensuring plenty of respect is paid to where the team, Wood, and Manchester’s Finest are really coming from. 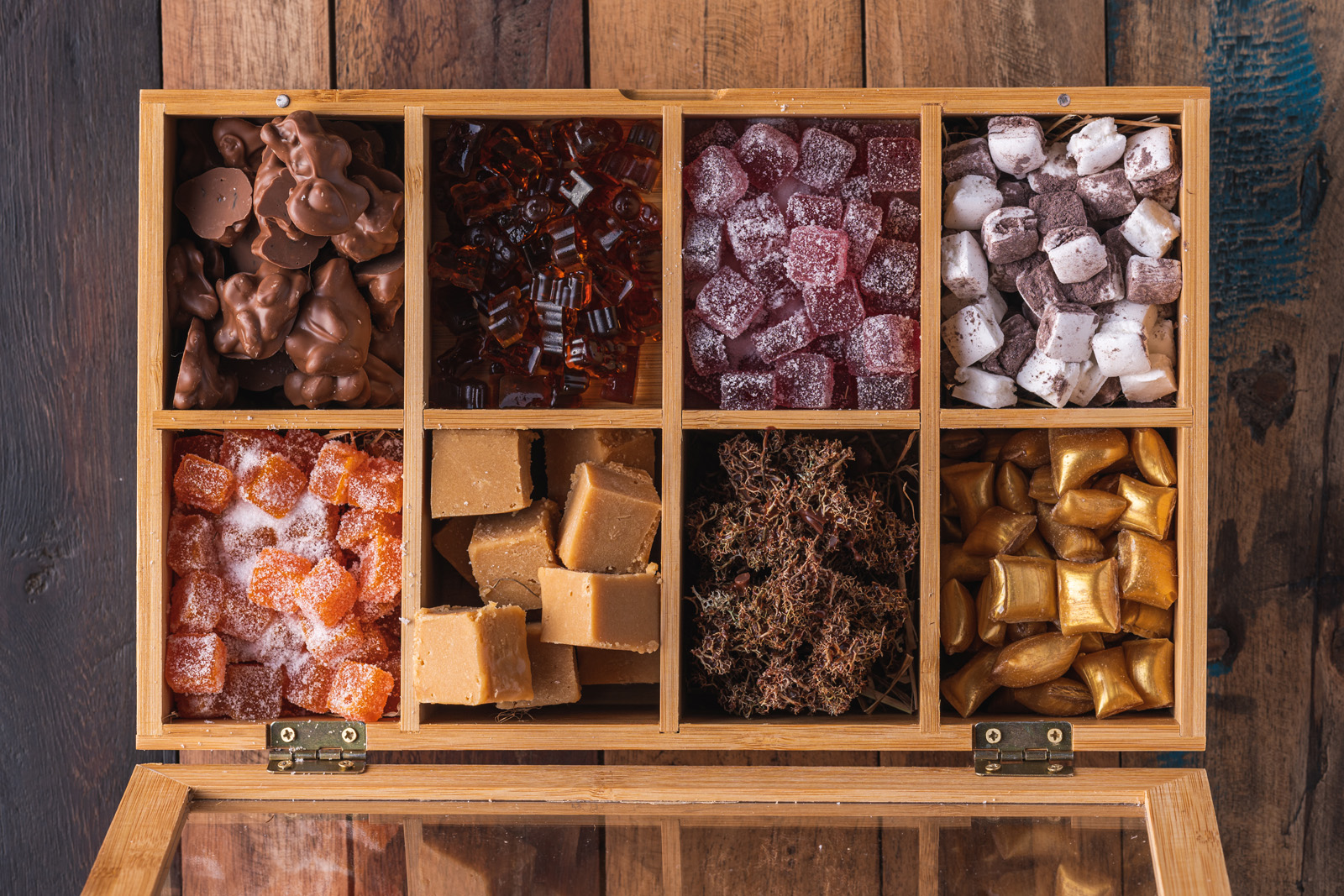 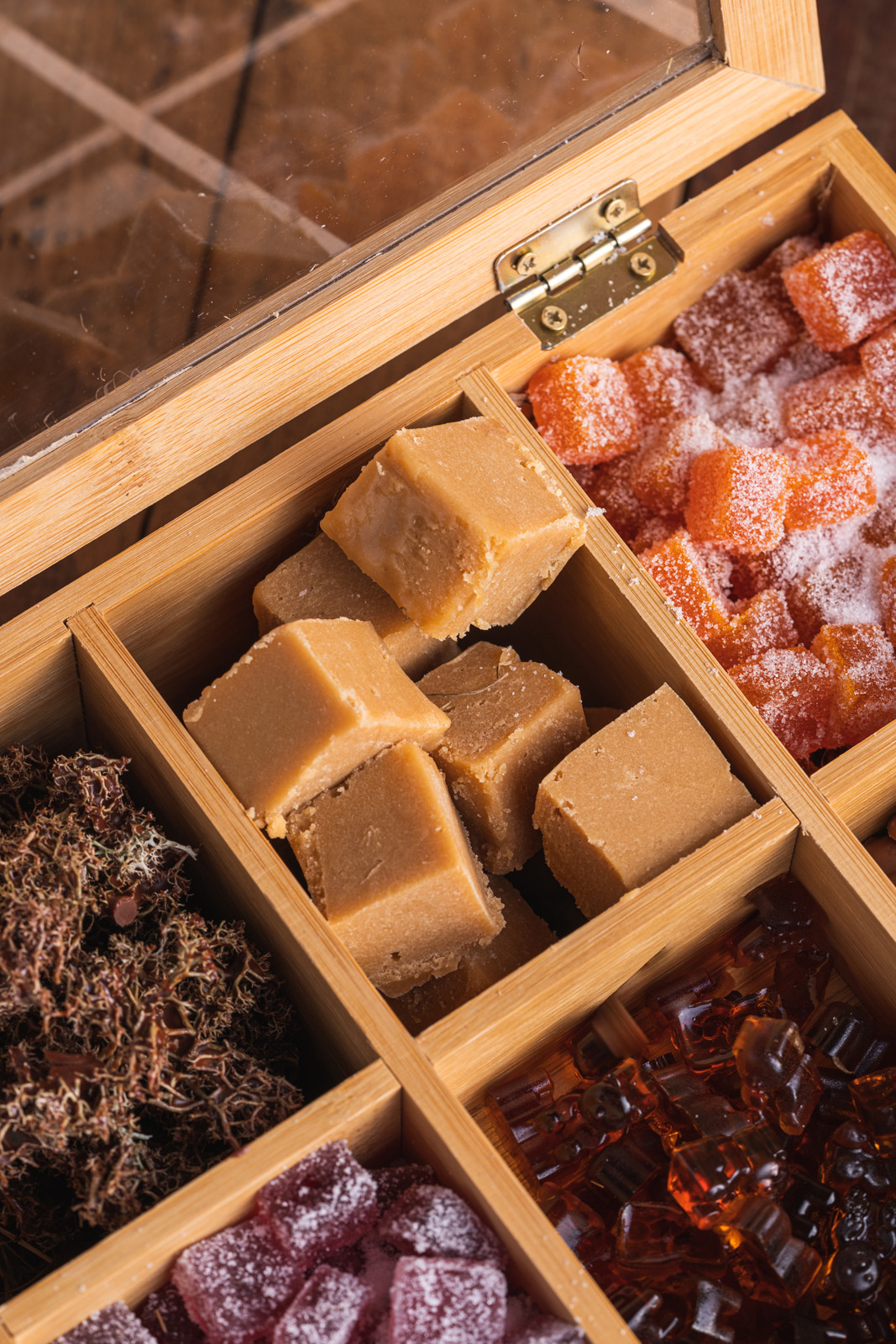 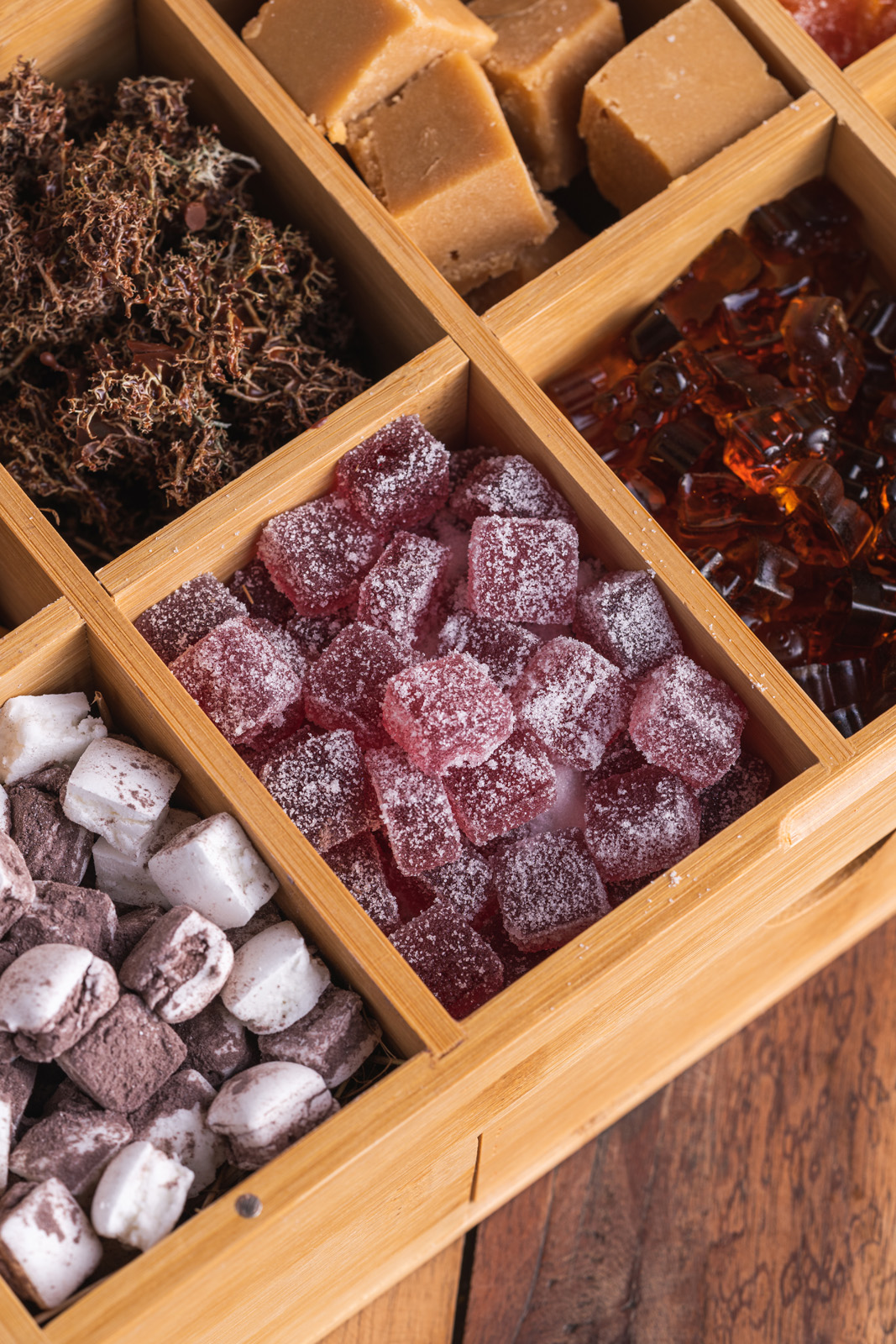 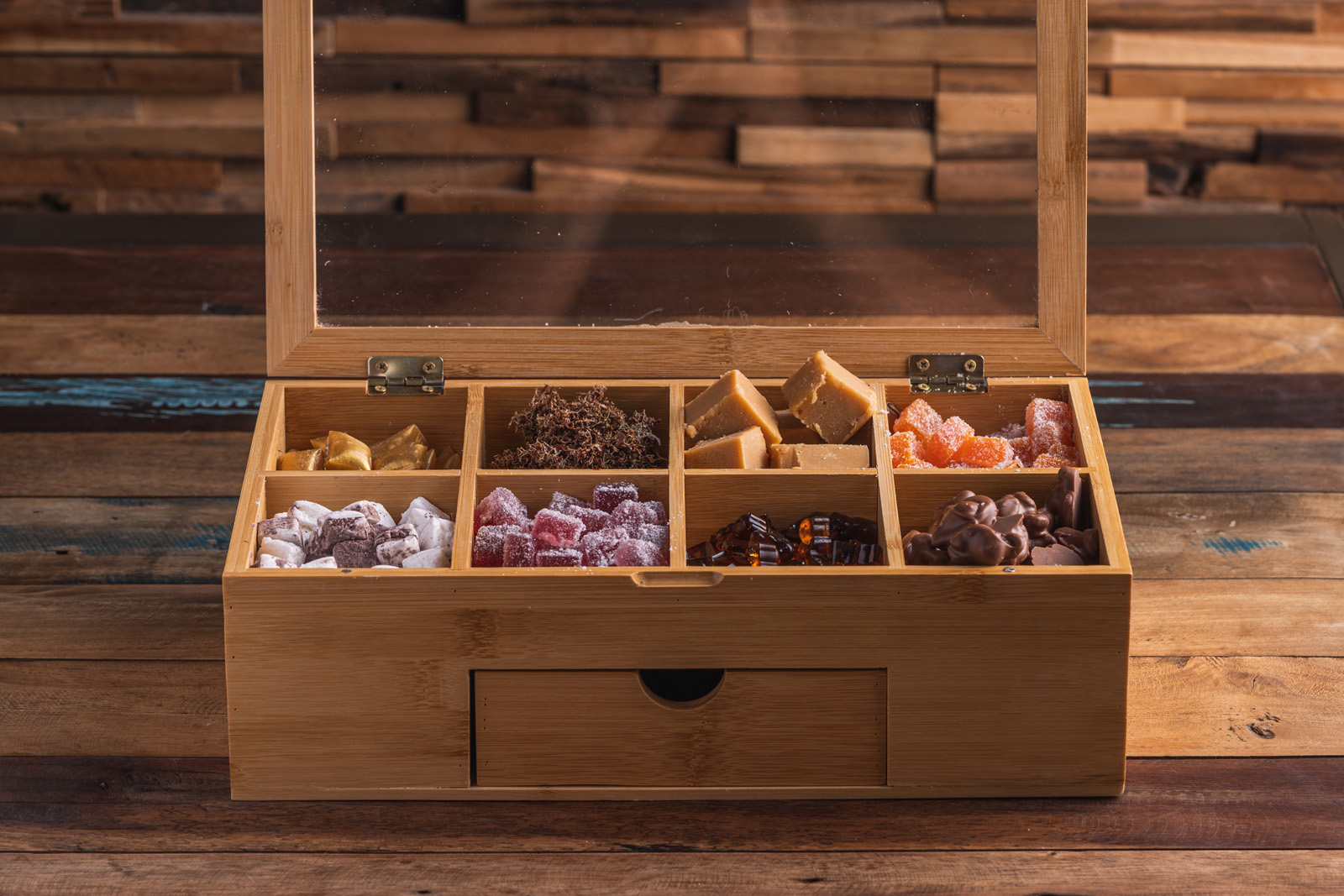 Book a table at Wood