After eating at Harvey Nichols last week - the only thing I could think about was the words of William Blake (at least I think it's him)...

There was something about the A La Carte menu that was so lush, full and inextricably British, and I think a lot of that comes from how bright, green and fresh all the dishes were. It felt inspired by ‘Our Green and Pleasant Land’.

All the seasonal ingredients used in the dishes felt familiar and native too. From asparagus to pigeon to lamb with green peas to rhubarb from the next county over – it all feels beautifully English, although it certainly borrows bits and pieces from neighbouring countries too.

We started with the Asparagus (£8), which was covered in melted rigatello cheese and came served on a lovely smooth sweet potato puree. This was topped off with a tart pine nut vinaigrette, some thin ribbons of shaved asparagus and toasted pine nuts.

Nothing fills me with more hope than when you start to see asparagus crop up on the menu. It means summer is on the way- although it might sometimes feel like it has forgotten.

This was a beautiful dish which put asparagus front and centre in a colourful salad which was both light and satisfying and everything you want to eat in the warmer months.

We also tried Sous-Vide Pigeon Breast (£8) which too was an absolute delight. I love seeing any sort of game on a menu and especially pigeon. It is notoriously easy to overcook, which is why perhaps some chefs avoid it, but if ever there was a lesson on how it should be done it was this plate of food.

Cooked in an ultra-low temperature for hours in a sous-vide machine- this managed to maintain a delicate texture which was still rare and tender without too much blood. Finishing it off in a pan, as it was here, was just what you needed to round it off and ensure a slightly coloured, crisp, skin.

It came served with a beetroot puree, baby carrot, haggis cake and a sumptuously rich gravy. I’ve got to say I was rather taken aback by the aesthetics of this dish too – lovely, deep colours which remedied me of crisp spring walks in the forest – if you believe food can remind you of such a thing!

Sticking with the game was another starter of Duck Leg Terrine (£7). Terrine or pâté is not something I tend to ever order because it is often a bit of a safe choice. However, this particular terrine was delicious with great texture and generous chunks of duck leg which I certainly liked.

It also came with a few blobs of an absolutely heavenly duck liver parfait, blueberries, a sticky port reduction and adorable mini brioche toasts. I have got to say, it was very much enjoyed and I finished every last crumb.

I do love a bit of colour coordination, so you can imagine my excitement when I saw three beautiful plates of emerald green coming towards me.

I think I want all my food to match from now on but fashion aside, I enjoyed that Harvey Nichols was clearly championing the power of English green vegetables like peas and leeks in their menu – that was abundantly clear.

First up was the Lamb Rump (£20). Lamb and peas is an obviously classic combination so the side of ‘pea cassoulet’ on the side certainly looked the part. However, I’m not 100% sure you can call a mixture of peas, onions, leeks and courgette a cassoulet if I’m being completely honest, but all was forgotten the minute I sampled that lamb.

To put it bluntly, it was utterly sublime and I haven’t tasted anything quite like it before. Beautifully tender and perfectly seasoned with a nice ring of pinkness in the middle (unlike the apparently raw lamb that is so much en vogue right now) this was some of the finest meat I have ever tasted.

I wasn’t convinced by the bacon crème fraiche at first, but it certainly grew on me as it went on as it brought a welcome temperature contrast and satisfying savoury note. However, in all honesty, I think the deliciously glossy gravy would have been enough on its own to carry the dish.

Another vision of glittering green was the Pea Risotto (£13). This had a great texture which was soft with a great al dente bite and topped with grilled courgette, peas, sprigs of basil and mint oil.

It was pretty flavourful in its own right but lots of that came from a generous peppering of Grana Padano which made things creamy, cheesy and all things good.

Last of the mains was perhaps my favourite dish of the afternoon- Sous Vide Halibut (£21). Now, I am certainly biased because I am of the school of thought that halibut is the best fish to ever grace the bottom of the ocean, but the skill and craft expressed in the cooking of it at Harvey Nichols blew me away too.

Chef cracked out that pesky sous-vide machine which ensured that the fish was perfectly cooked and flaky to the touch as well as having a beautifully crispy skin from a final blast in a hot pan. There were also a few deep-fried cockles for another pop of seafood flavour, as well as creamed leeks and bright green chive oil.

It came with another triumph of their culinary ability – the Champagne Volute. This smoother than getting into silken bedsheets with freshly shaved legs. It had a divine flavour of Champagne too which everyone knows is a match made in heaven for white fish. It really was exquisite.

On to dessert, and there really was something for everyone. If you have a particular sweet tooth, you will love the Frozen Strawberry Parfait (£6). It was presented impeccably with a cute little chocolate covered lollypop sticking out from the plate. The ice cream inside was delicious too and really tasted like the true taste of summer strawberries although it was a tad on the sweet side for me.

Chocoholics will enjoy the sumptuous, sexual appeal of the Dark Chocolate Delice (£8). This takes a chocolate base topped with chocolate mousse and finally a rich chocolate ganache.

It was then finished with honeycomb, chocolate tuile, and a creamy quenelle of pistachio ice cream. All in, it cannot be described as anything other than heaven on a plate.

Finally, the Lemon and Rhubarb Financier (£7) tasted like summer all in one bite. The cake itself was light and flavourful while the rhubarb and rhubarb semi-gel brought sour-sweetness for the lemon cream to contrast beautifully with.

Top marks all around for this one and I could have eaten it twice even after guzzling most of the abode.

Upon first look, you may think that the Second Floor Brasserie at Harvey Nichols is just the place for a quick pit-stop while you shop, but let me tell you, it is so much more. It is a restaurant with a stunning, seasonally-led menu of British dishes with European twists made with true love and passion.

You will be surprised by the technique, knowledge and overall finesse which is put into every plate of food at Harvey Nichols, and it all feels familiar with local, native and seasonal ingredients used wherever possible.

There is nothing much left to be said other than if you like good food, you will love Harvey Nichols. 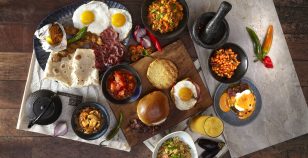 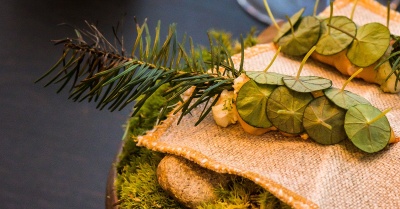