I think everyone would agree with me when I say that there's always going to be places in the city where you’ll just never go into, no matter how hungry, thirsty, tired or lonely.

It’s not that these places are in any way bad, it’s just that they operate under the radar of many of the city’s dwellers, and so when someone says ‘Where should we go for brunch?’, you’re going to think of the well-known places like Federal, Fress, Cottonopolis or Trove.

One such establishment which has been operating a little under the radar since opening has been LEAF on Portland Street. First of all, geographically it’s not exactly in the most exciting place in the city, a kind of no-man’s land between the Northern Quarter, Spinningfields and the Oxford Road Corridor, Portland Street has traditionally been the land of Fab Cafe, Buffet City and a slew of random restaurants that never really seem to last very long.

Since opening towards the end of 2016 however, LEAF have slowly but surely started to make a bit of a name for themselves, both in terms of their general brew and cake offerings, their events, and now – their food.

The Finest team went down on a sunny Friday afternoon to try their new ‘Savour the Weekend’ Brunch Menu and I think it’s safe to say that we were very impressed.

The menu at LEAF is extensive, with everything from sandwiches to sharing platters, curry, pasta and hummus. We were looking to concentrate on their Brunch though, which is available every day until 3pm – perfect for those of you on the dole, hungover or just plain lazy.

All of the big hitters are there including the classic Full English (also available in Veggie & Vegan variants), Smashed Avocado and enough Poached Eggs to feed the entire population of Melbourne for a Sunday morning. We decided to give a few of the more unusual dishes a try however, starting with the Shakshuka Poached Eggs.

A legendary Middle Eastern dish, Shakshuka comes in about a million different variations and recipes, but the main gist is a dish of eggs which are poached in a spiced vegetarian stew of tomatoes and peppers. LEAF’s variation comes with the addition of Butter Beans and Pistachios – additions that add a unique subtle flavour to the tangy tomatoes.

The dish isn’t something I’d typically think to order but I found it both filling and flavoursome, with the tomatoes spiced to perfection working so well alongside the delicately poached yolky eggs. I’m a big fan of spice with my eggs and this dish certainly didn’t disappoint – there was a subtle chilli kick to it which worked wonders for my Campari induced hangover from the night before.

Next up we thought we would try a bit of a classic, but again with a LEAF twist – Egg & Crumpets topped with Kale & Oyster Mushrooms. Everyone loves a good crumpet, in fact pretty much every single argument can be solved by having a couple of crumpets, soaked through with butter and Marmite and talking it through. These beauts at LEAF were excellent – homemade in fact – well, as homemade as you can get in a kitchen in the city centre.

They were both soft and crispy, thick and thin – they were the antithesis to the industrialised perfect dimensions you’d find in a supermarket and they were all the better for it. They managed to soak up the hollandaise and the egg’s perfect yolks like a sponge, offering a juicy explosion of flavour in every mouthful. Alongside the kale and the mushrooms, the dish was balanced perfectly – with the mushrooms offering a very welcome ‘meaty’ texture to the whole thing.

As well as the veggie option they also offer Smoked Back Bacon or Green Tea Poached Salmon on top – both are now firmly on my list for the next time I visit.

Up next was what we considered to be the stand out dish of the day – and just reading it is bringing back some very pleasant memories. We went for some Griddled Sourdough topped with Bacon Jam, Gorgonzola, Vine Tomatoes, Poached Eggs and a Pistachio Dukkah.

I mean, just read that again. You know that this dish is going to be bloody special, and when it came out and we started to tuck in, nobody stopped until it was all gone. It took about 2 minutes (and that’s with a fair degree of politeness thrown in).

The massive slab of soft sourdough was smeared liberally with the most delicious Bacon Jam I’ve ever encountered – it was both smoky and sweet, but not too sweet so as to ruin the complex flavours elsewhere in the dish.

The Gorgonzola added a welcome addition of salty goodness, which in turn worked amazingly well with the roasted tomatoes and the poached eggs. Each individual element of the dish was delicious, and with them all working together – this thing was a dish of true beauty. If you are only allowed to eat one thing at LEAF – eat this.

Finally, we thought we would provide for our sweet tooth by tucking into some of LEAF’s American Pancakes which come topped with Greek Yoghurt, a Blueberry Compote and drizzled in Canada’s finest Maple Syrup. These beauties took me straight back to the states – they were thick, fluffy and there were loads of them – perfect for a greedy gentleman, fine for sharing between two.

Again, these didn’t last long and were swiftly devoured by the table. The Blueberry stuff on them was amazing by the way – I’m not usually a fruit guy but this stuff was like crack.

It’s safe to say that by the end of the brunch, we were all pretty stuffed and had thoroughly enjoyed the dishes. Stand out winners were definitely the Sourdough with Bacon Jam & Gorgonzola, as well as the homemade Crumpets – both some of the best brunch dishes we’ve tasted in the city. The Shakshuka and Pancakes were also excellent, but it’s hard to compete with such impressive creations.

Overall our experience at LEAF was a revelation. As I said, it’s probably not going to be the first place you’d think of to go for brunch – but it should be. Well worth the visit indeed. 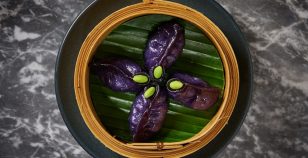