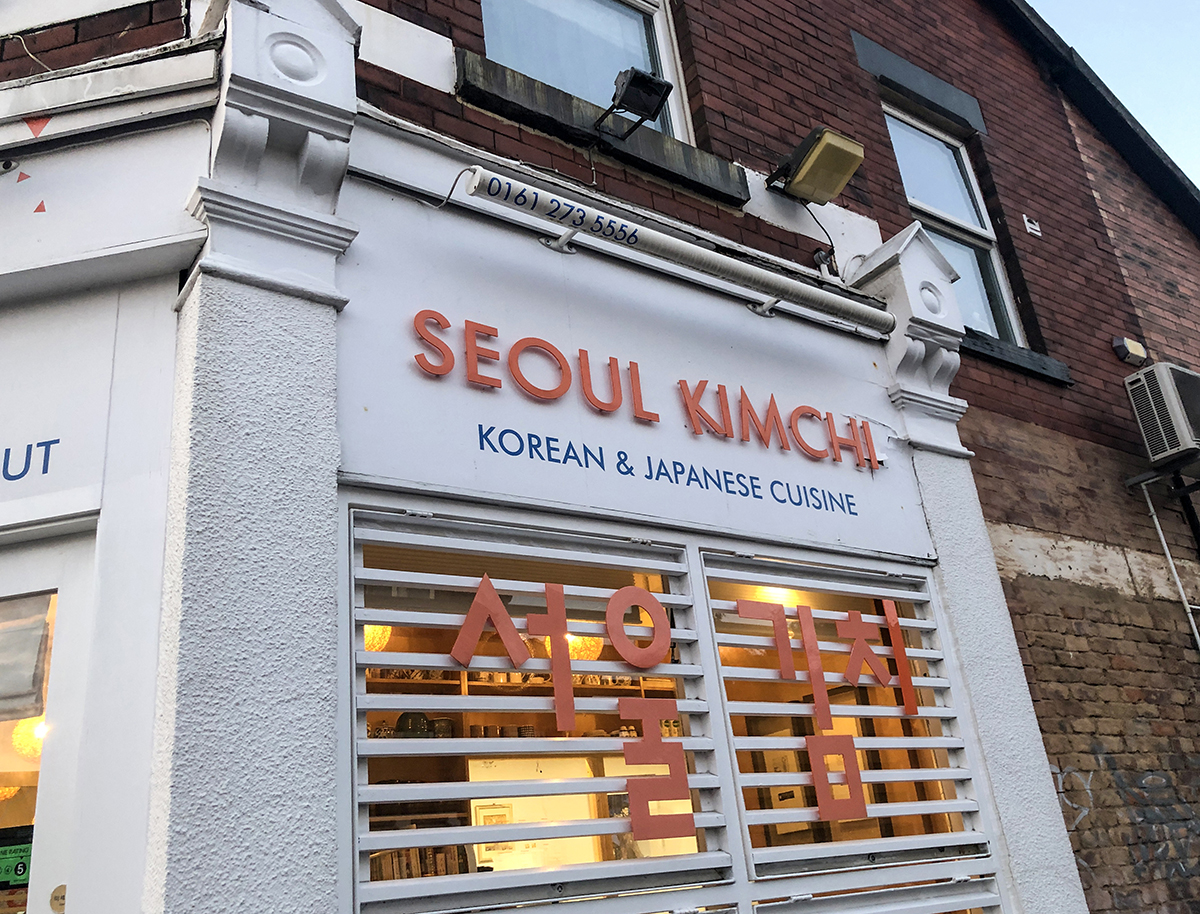 Some of you will have heard of it, others of you will have actually been, but one of Manchester’s most impressive and authentic culinary experiences is still, in my opinion, criminally overlooked by most.

It may be due to its location. Plonked on a rather dodgy terrace of shops and takeaways (and a Subway), Seoul Kimchi is a tiny beacon of Korean deliciousness directly opposite those shiny new buildings round the back of the Manchester Royal Infirmary.

When I say that Seoul Kimchi is small, I’m not over-egging it – it’s tiny. They’d be hard-pushed to seat 12 fully grown humans in there, but that’s part of the enduring charm of the place. In fact, upon my visit we were seated pushed up against the wall, right next to the kitchen, side-by-side and seemingly destined to be forgotten and ignored.

That certainly wasn’t the case. 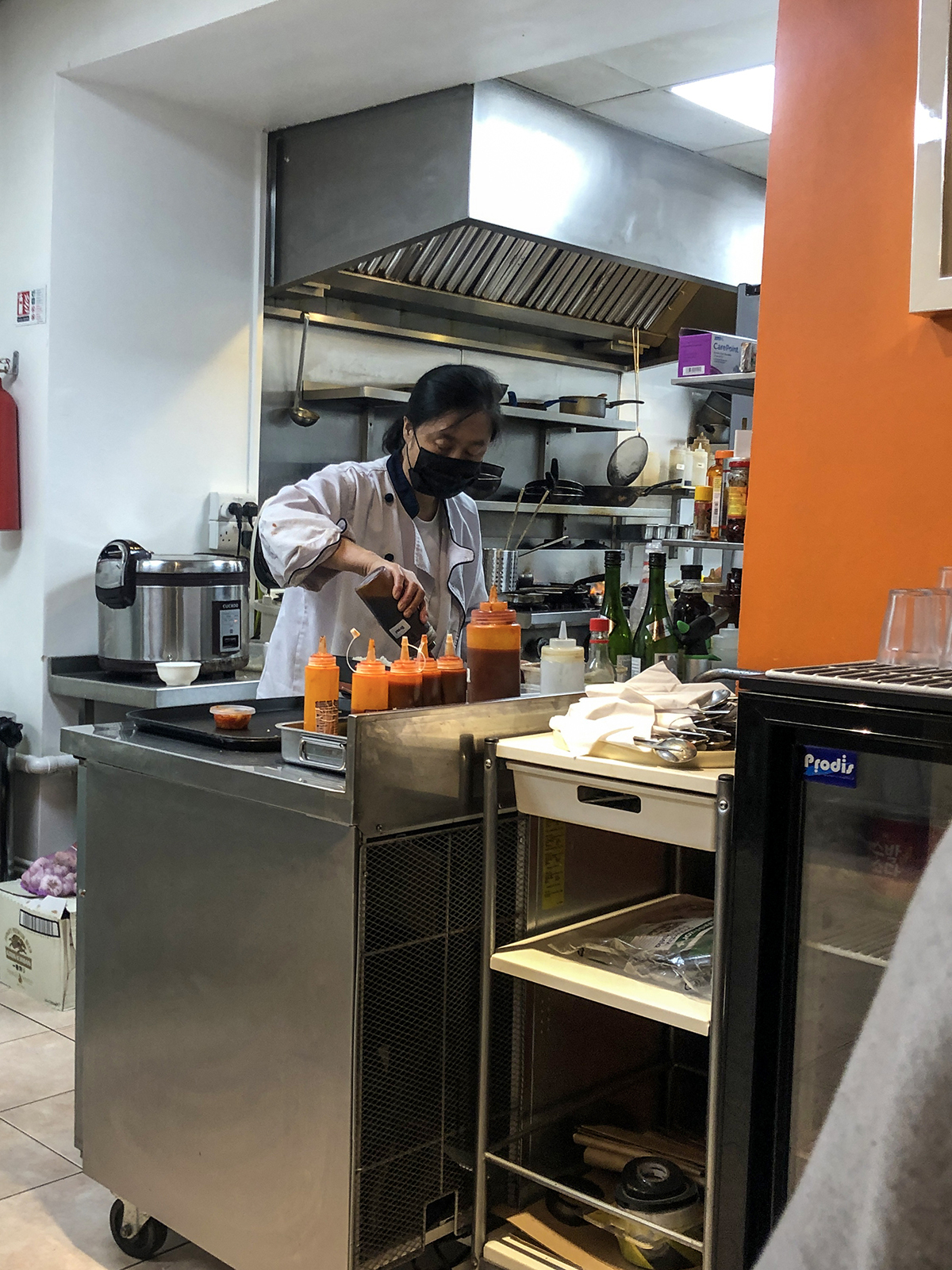 Sitting in Seoul Kimchi you can’t help but notice the hustle and bustle of the whole operation, from the chefs tossing, seasoning, flaming and flambéing, to the servers weaving, ducking and diving to get you your food – it’s almost anxiety-inducing but also strangely satisfying.

You quickly come to realise that you’re experiencing true authenticity before your eyes. The food is prepared, cooked, served and eaten the Korean way – quickly, efficiently, and with everyone with a massive smile on their face.

Seoul Kimchi became a surprise hit a few years back after a visit from Observer food critic Jay Rayner, who was so impressed that he declared that “The soup should be offered on prescription“, but since then – have they rested on their laurels or is Seoul still the premier Korean joint in town?

Well, recent years have seen an influx in Korean restaurants into Manchester, mainly focused on the popular BBQ concept, where you order the raw ingredients and then cook it yourself on the hotplate at your table. As brilliant as this concept is, Seoul Kimchi is an altogether different animal, offering up fantastic, homemade dishes that are fiercely and unapologetically authentic.

We were decidedly hungry on our visit so we decided to indulge ourselves in starters, as well as a couple of rather large mains – leaving through the busy restaurant with our belt buckles undone and doing that signature ‘fat bloke waddle’ that appears when you’ve eaten too much.

Kicking things off as everyone should, we opted for the Kimchi & Beef Gyoza (£5.50) – their handmade dumplings that are much thicker and crispier than what you’ve probably had before. Actually called ‘Mandu’ in Korean, these dumplings are everything you’d hope they’d be, stuffed to bursting with minced beef and Seoul’s outstanding fermented kimchi. 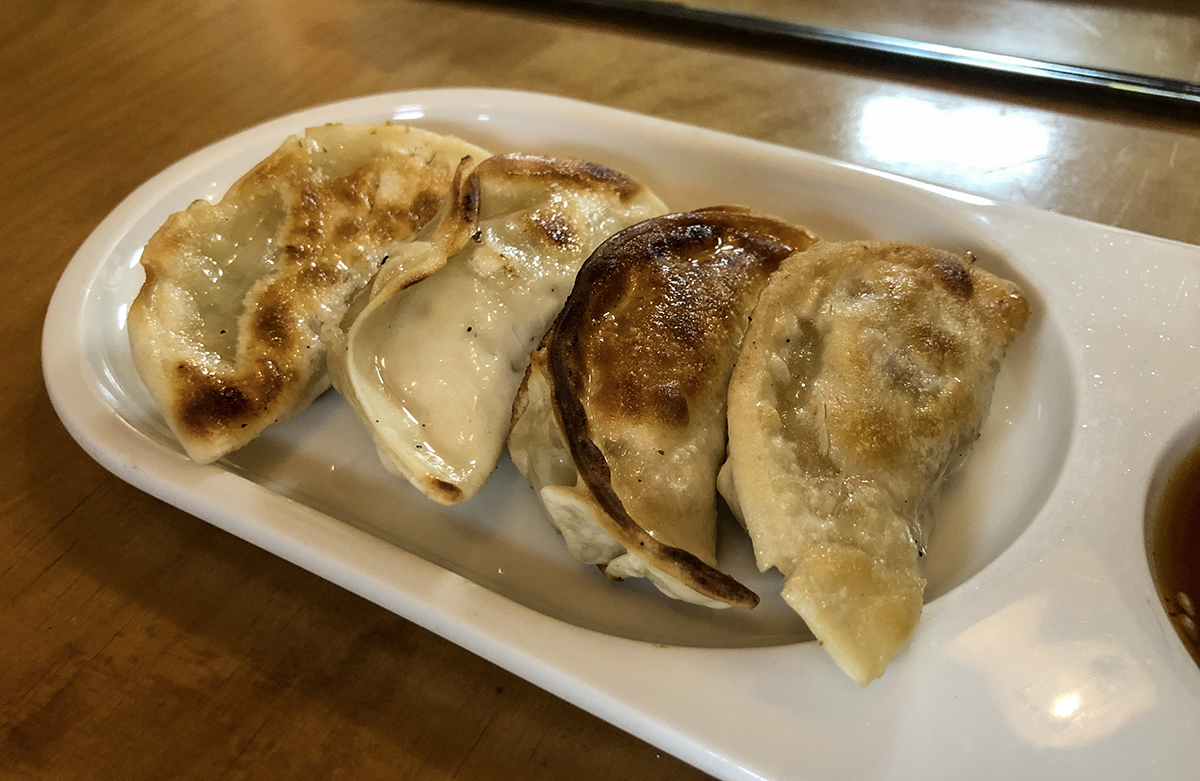 In addition, we also sampled the veggie Jeon (£7.90) which is described on the menu as a “savoury pancake” and is rather similar to the Japanese Okonomiyaki – a filling coated in flour and egg and then expertly pan-fried in oil. It’s very much exactly what you’d expect from the description, and was really rather addictive.

Continuing our gluttony, I ordered the classic Korean Beef Bibimbap (£9.20) while my wife decided on a Salmon Teriyaki Bento Box (£12.90) which is best described as a small buffet of all of their biggest and best dishes. Not that it was small by any stretch – it completely destroyed us both. 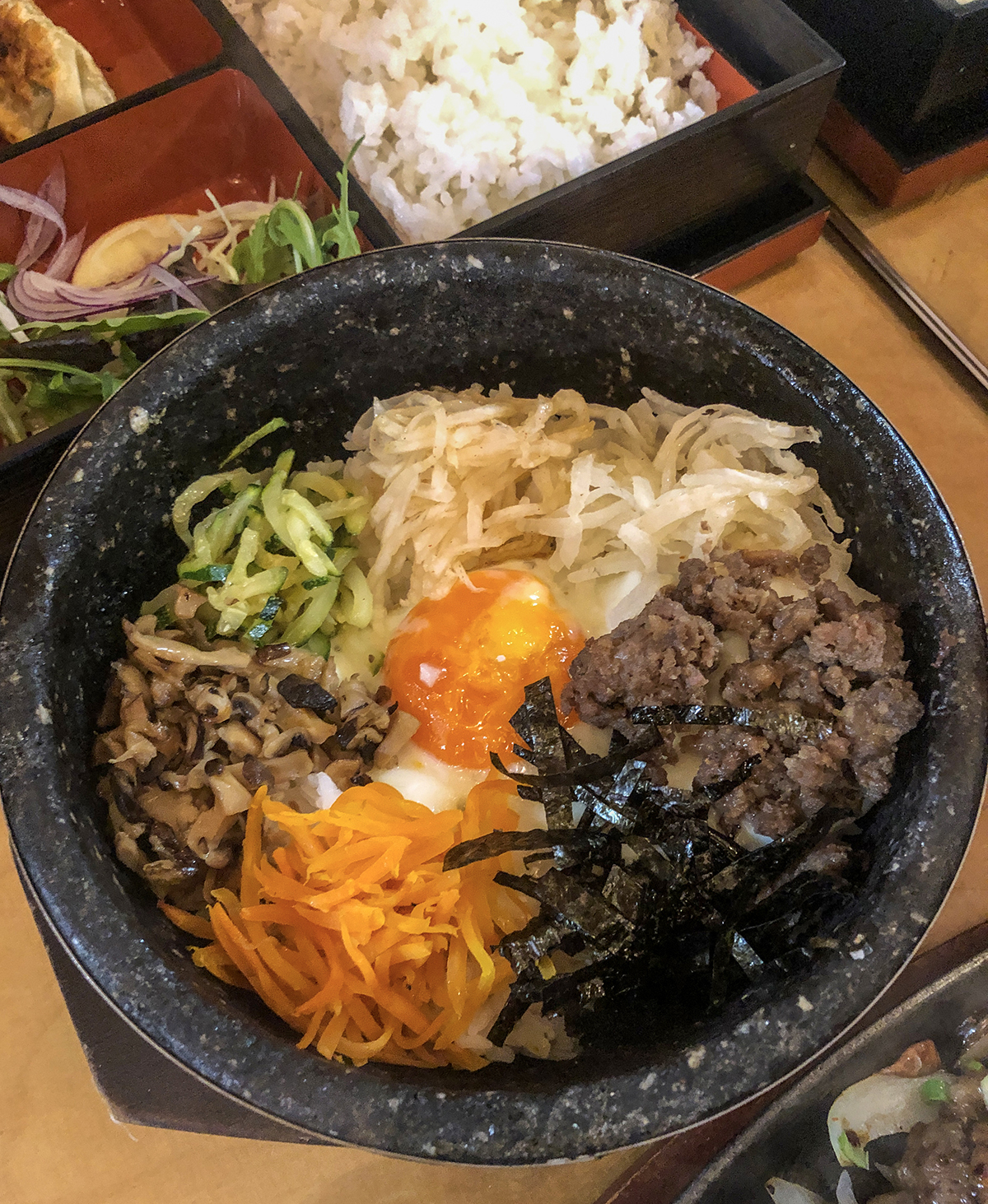 Starting with the Bibimbap though, this is a common rice dish in Korea and something that I first tried in China around 15 years ago. Served in a scorching hot stone bowl, the sticky rice continues to cook at the table – going crispy and more delicious the longer you take to eat it.

Resting on top of the rice is a selection of vegetables, meat and a fried egg, as well as the thing that makes a Bibimbap so special – Gochujang – a spicy-sweet sauce that’s made with fermented red peppers and chillis. A Korean restaurant can be judged by the quality of their Gochujang alone and in this respect Seoul Kimchi come up tops once again. 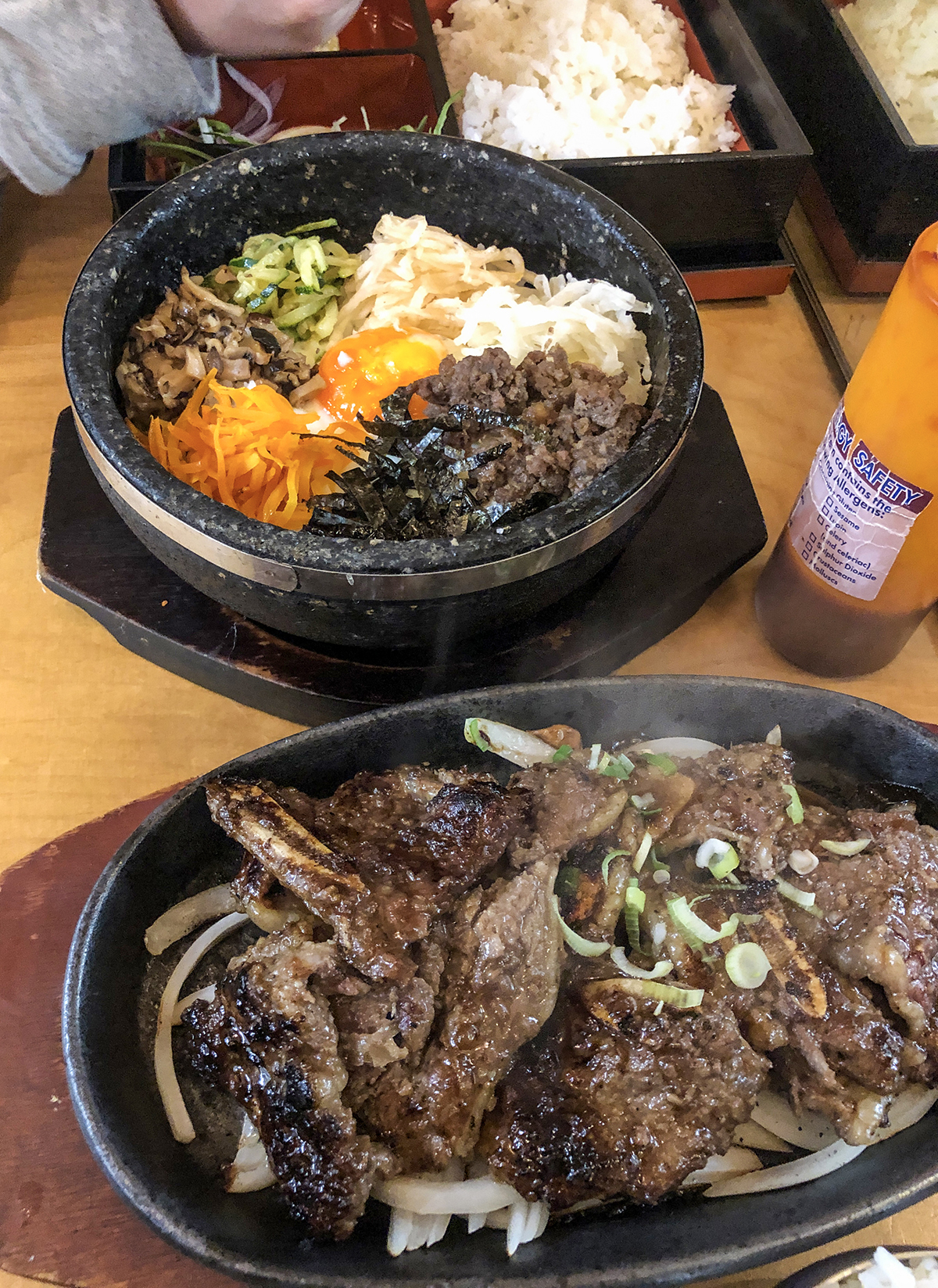 The idea is to mix everything together in the stone bowl and wolf it all down – which I politely and efficiently did.

Meanwhile, my wife was struggling with the Bento Box. Struggling because by this point she was stuffed, so I, being a good and helpful husband, decided to help her out and started scoffing her food too. And boy – it was good. 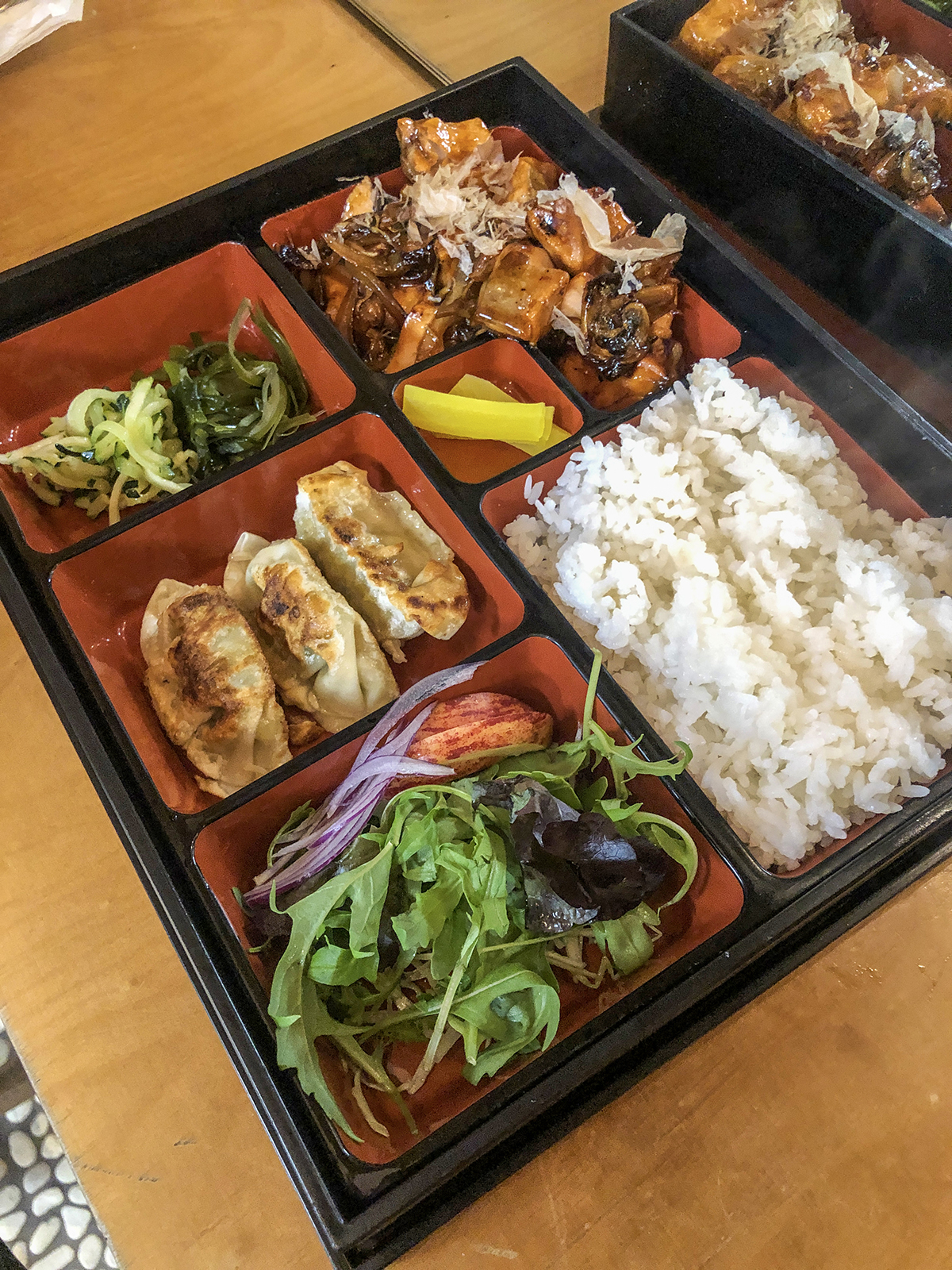 The Bento concept is basically a multi-sectioned box, with each bit containing some form of favourite from the menu – so there’s a bit of kimchi in one, sticky rice in another, gyoza in the other, and so forth. Topping the whole thing off was a Salmon Teriyaki which managed to tick all the boxes – fresh, juicy and flavoursome.

There’s plenty to be getting on with and the Bento Box is also the perfect introduction to anyone who hasn’t tried Korean food before, or perhaps is one of those people who struggles to decide what to have when faced with a menu. By having a selection of different things – you get to try much more and really see what Seoul Kimchi can do with their woks. 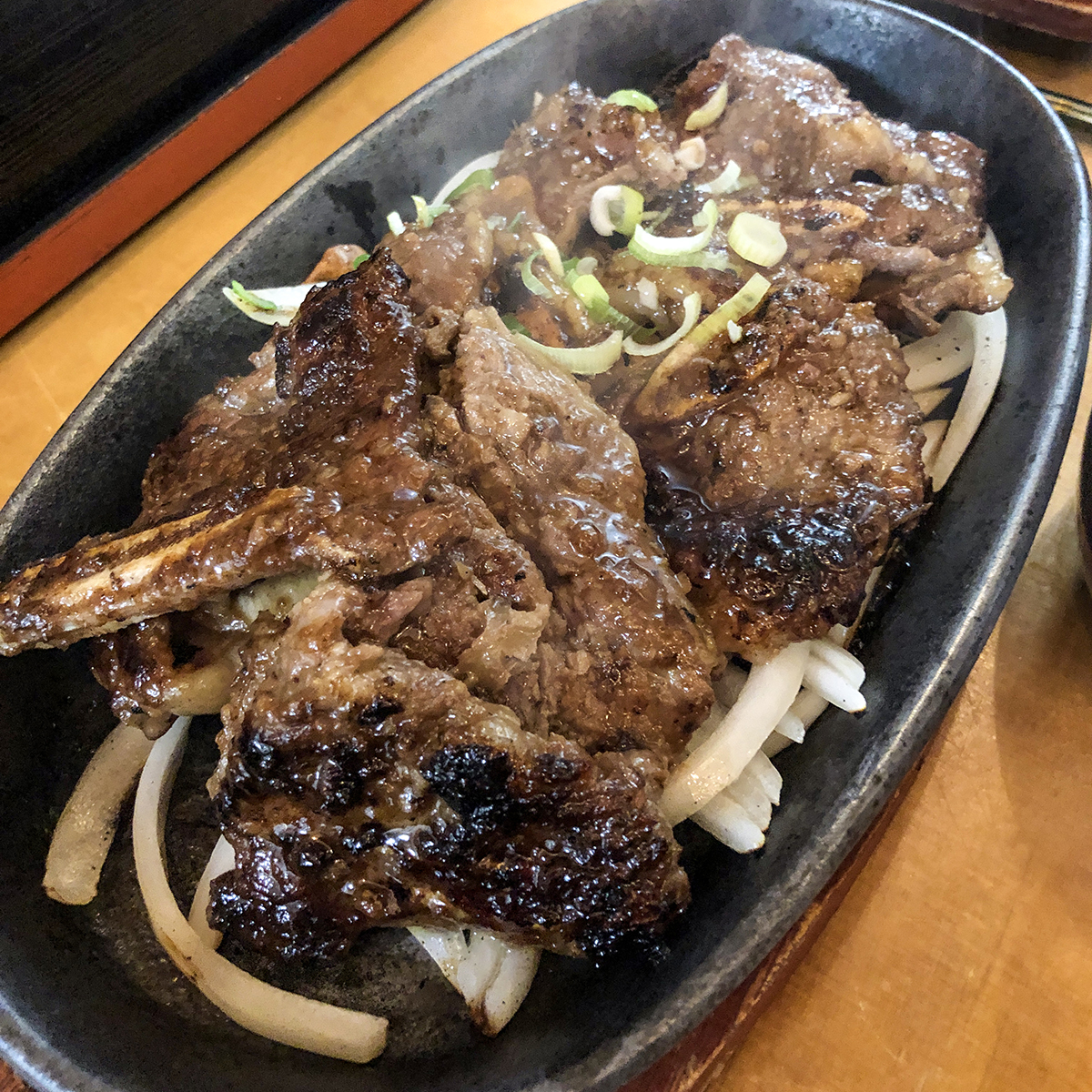 We also indulged in some Galbi (£10.90), braised beef ribs that were juicy, full of flavour and nicely fell off the bone upon impact with our teeth. We did, alas, struggle to finish these though just due to the sheer amount of food that we’d ordered and then eaten.

All in all, from entering to leaving we must have been in Seoul Kimchi for around 40 minutes – but we managed to sufficiently pack that short space of time with plenty of outstanding dishes and a cacophony of flavours.

The restaurant is still very popular, and they are still creating some of the city’s best and most authentic Korean dishes. I implore you to take that slightly longer bus journey down Upper Brook Street and give them another visit – you won’t be disappointed.