From Manchester to: Eating Palermo

We find ourselves in Palermo, the Sicilian capital and street food mecca, a place which - much like its many sinful deep-fried treats - is famous for being a little rough round the edges. 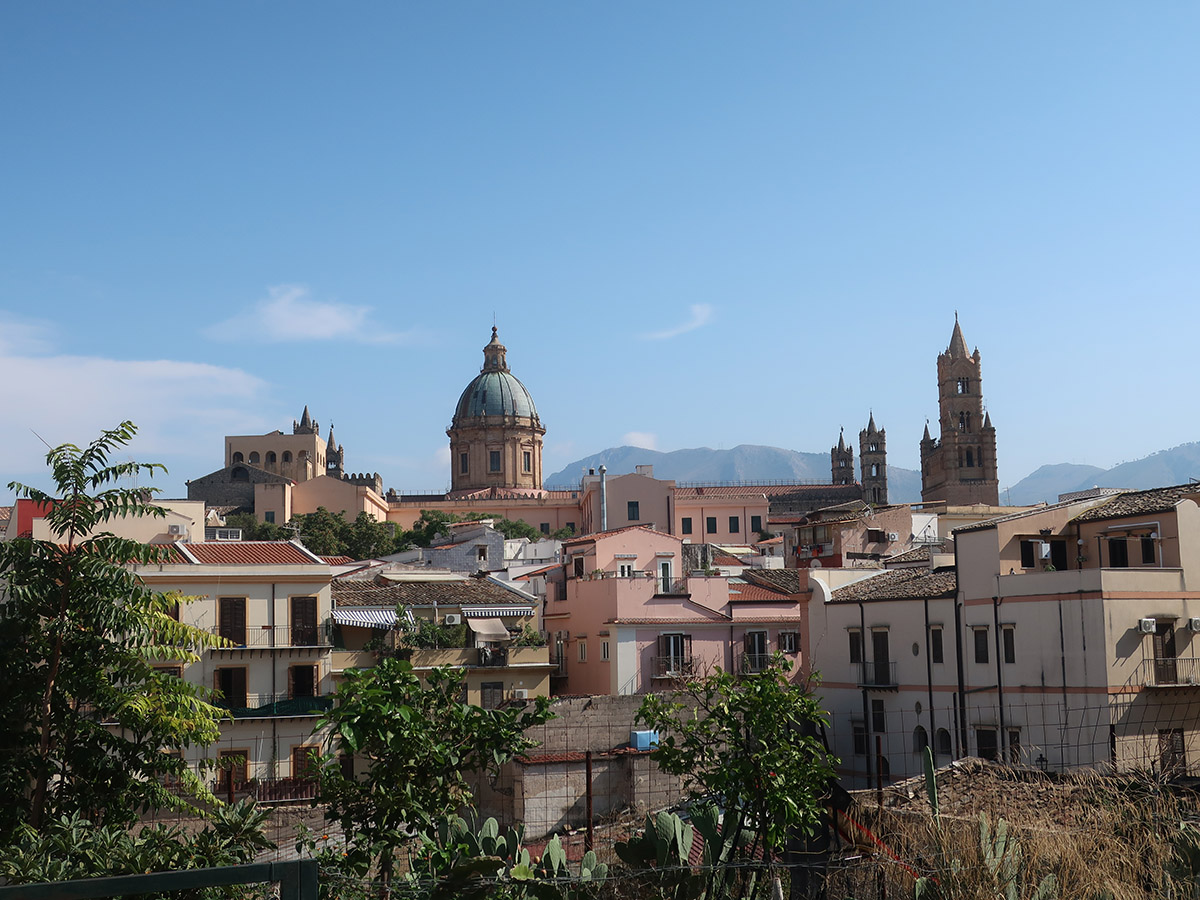 Delving nose-first into a city’s markets is always the best way to discover local flavours, and Palermo boasts no less than four fascinating food-filled labyrinths to munch your way around.

Bear in mind though, this is not street food hatched for tourists – or even foodies for that matter – case in point Mercato del Capo, which has been sustaining inhabitants since the island’s Arabic era over a thousand years ago, this place is the realest of deals. 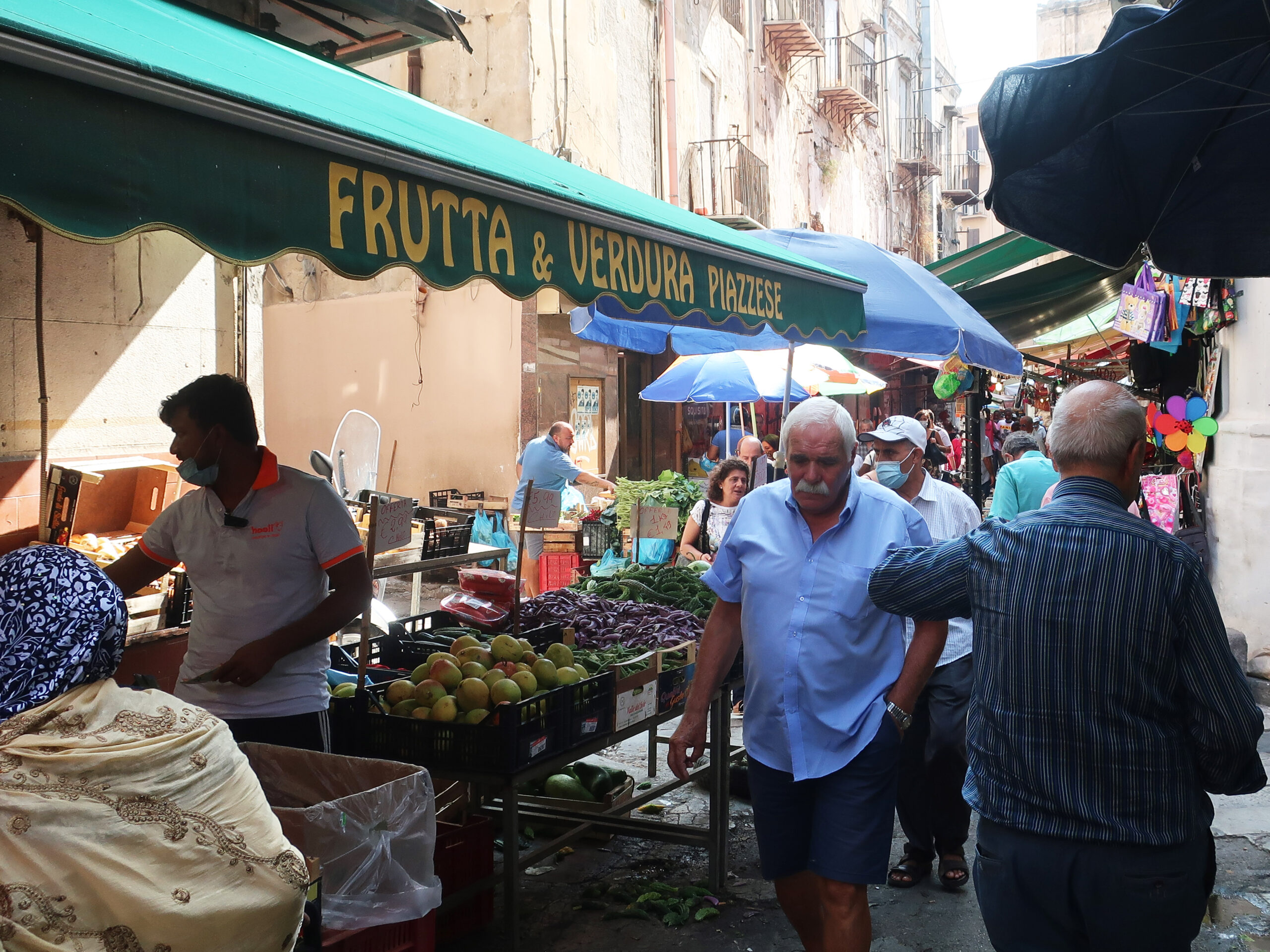 That’s not to say that Palermitan markets aren’t accessible, there’s no need to feel intimidated, but it helps to take a steering hand if you don’t want to miss a treat. 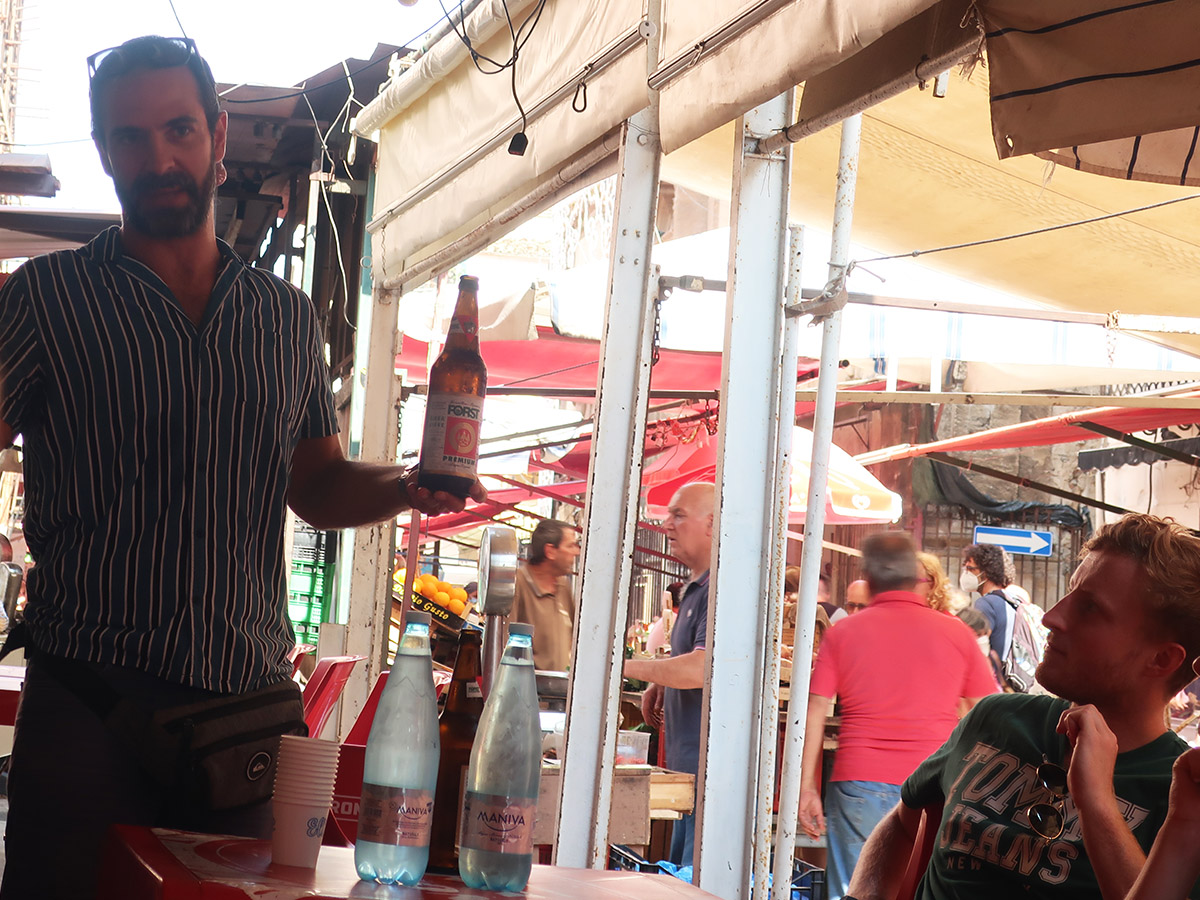 Treading a steady path through the captivating frenzy of Capo there are morsels of meat, cheese and miscellany to pick at alongside Marco’s tales of how food culture has evolved on the plates and palates of the many visitors, both hostile and otherwise, that Sicily has encountered through the ages.

Whether their singular form should be arancina (Palermo) or arancino (Catania) is a source of greater contention even than football rivalries between the island’s two largest cities, clearly a resident of either however, would concur that we’ve found some of the best here. 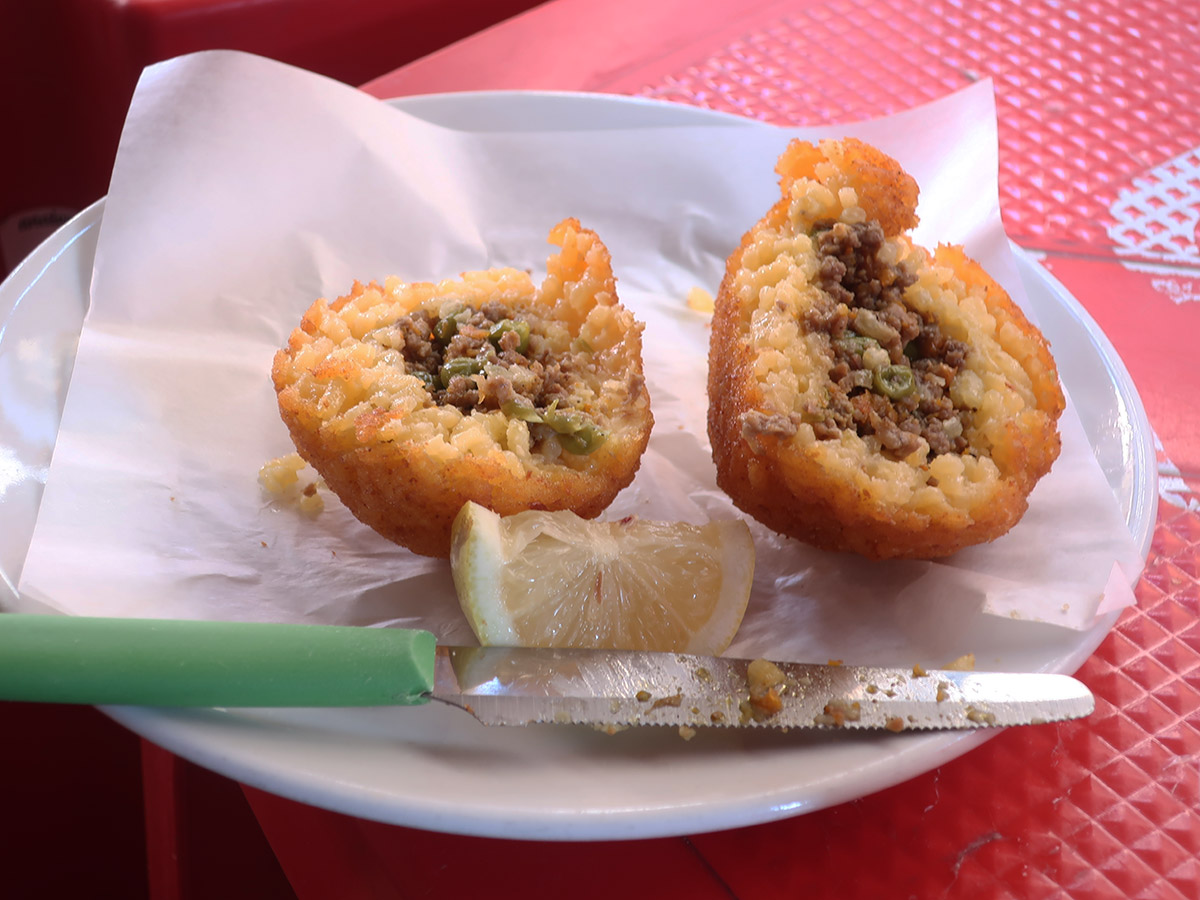 Delicately succulent, like a ripe piece of fruit formed from plump, tender grains of arborio rice, every bite betrays a masterful combination of textures. Each arancina is held in place with the crispiest of golden crusts and hides a core of rich beef mince and pea filling.

Forget loading an extra suitcase with ciggies and booze, these are the Italian vice truly worth bringing back on the plane. 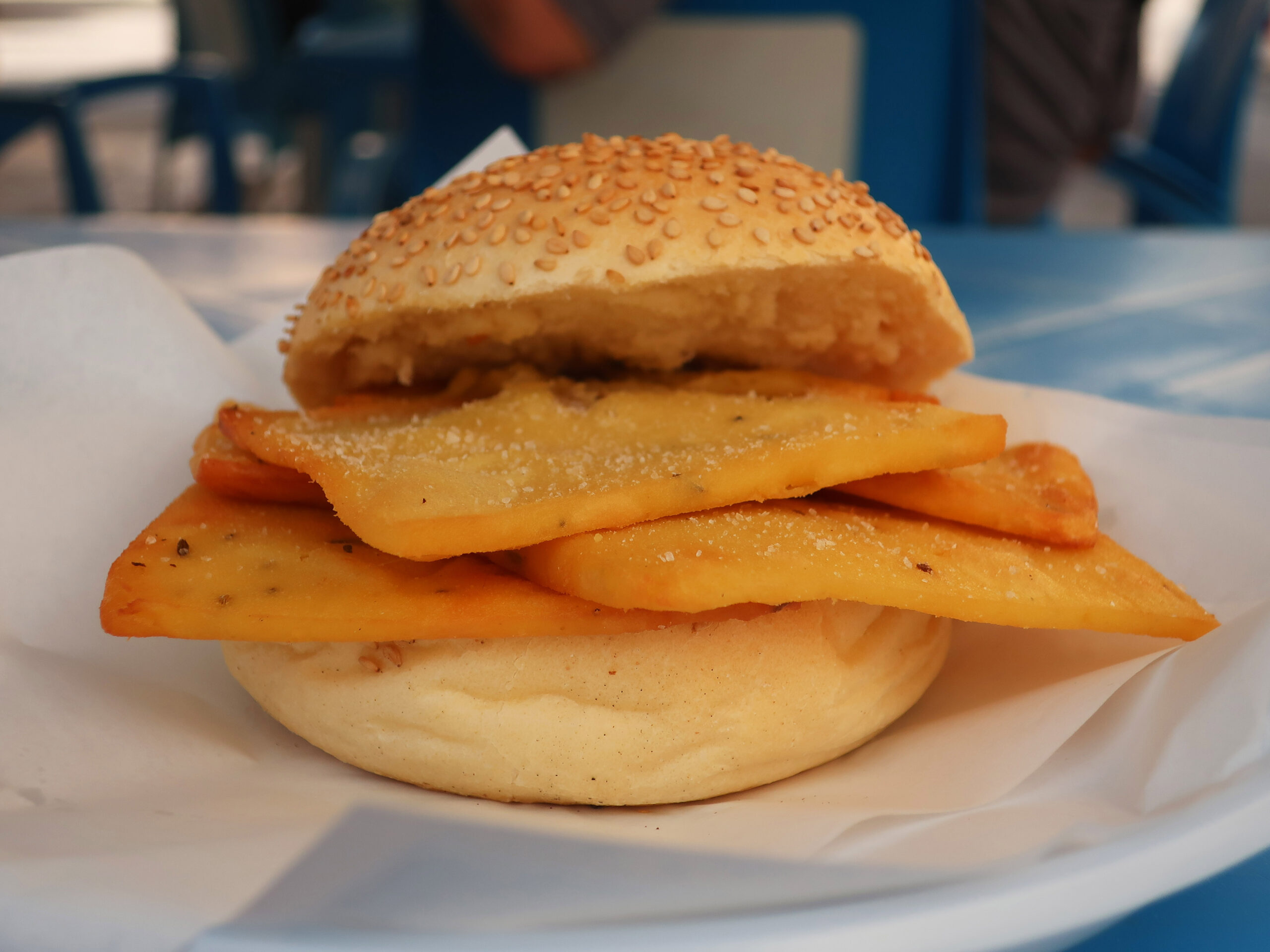 Next we dig into Panelle, salty, crunchy and lightly cumin-spiked chickpea flour fritters, usually served piled on a plate with just a wedge of lemon for company or packed into a bread roll, but always best with a beer or two.

For our final savoury bite we delve deep into Mercato Ballaro to try perhaps Palermo’s most infamous street snack, Pani Ca Meusa, a butty that’s probably best to taste before you try to translate it.

Scrappy strips of tenderised cow spleen and lung are fried in lard then stuffed into a sesame seed-topped bun and served unapologetically bereft of any condiment or complication. The result is some sort of greasy, offal perfection and, like a good donner kebab, perhaps best enjoyed with a spirited appetite. 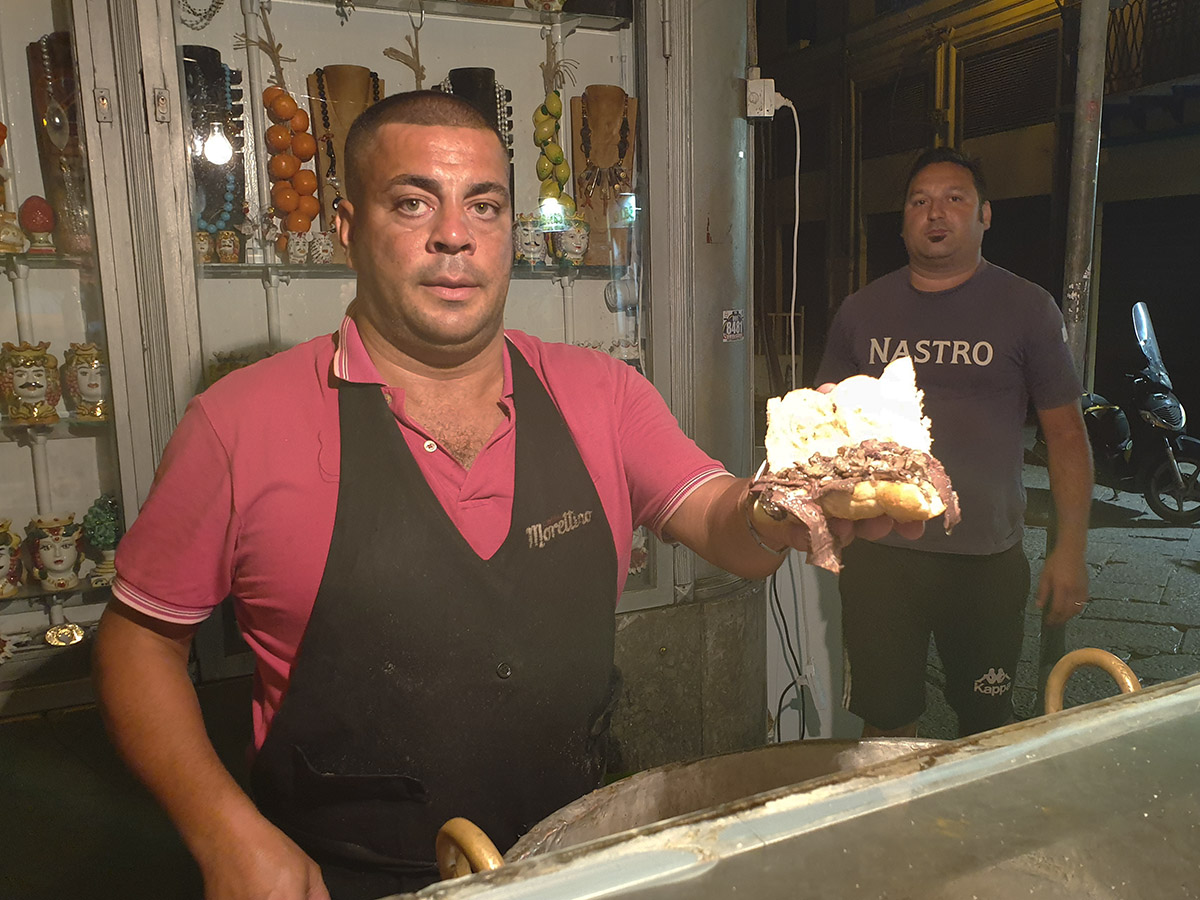 If there’s a general theme amongst all this of fashioning just about anything into a sandwich, you shouldn’t be surprised to learn that’s what Sicilians do with their ice cream too. Before parting company, we end our tour with gelato at Gelateria La Kala, served the traditional way in a sweet brioche bun. It might sound a little strange but believe me when I say this will definitely catch on.

And just how do Sicilians keep themselves trim with all these indulgent foods on offer? “They don’t” Marco flashes back through a contented grin. 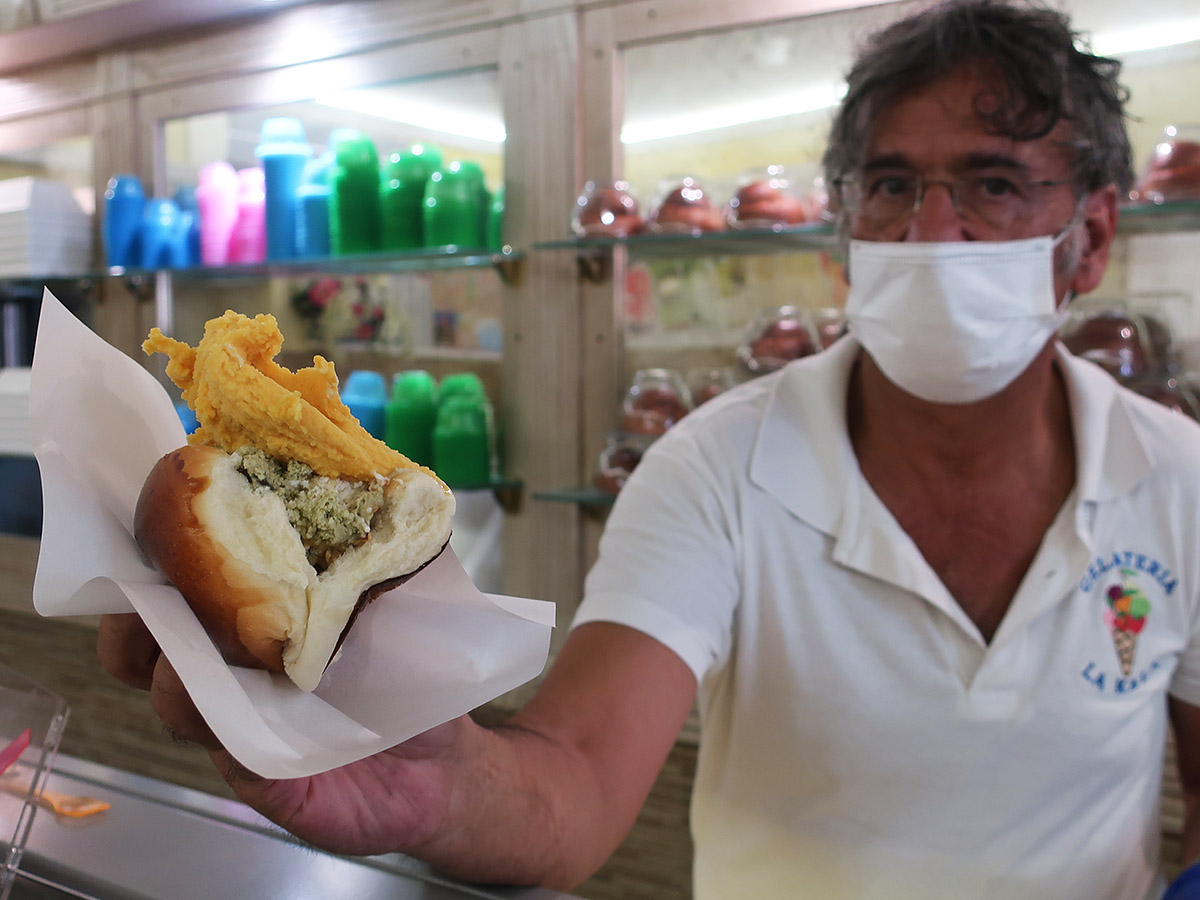 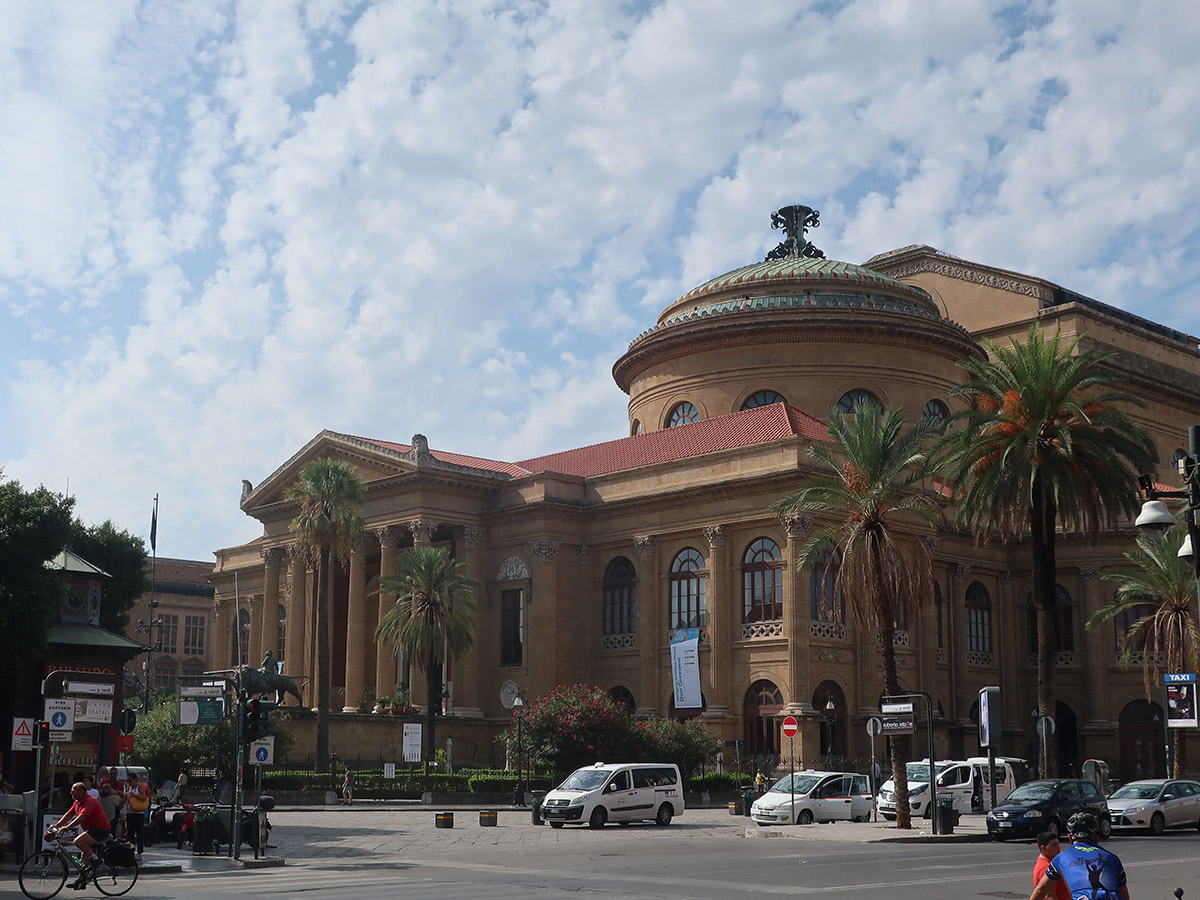 Truly it can be difficult to walk off what you’ve eaten when every corner offers yet more ways to gratify your senses. Should you wish to try, then taking in the sights of the magnificent Teatro Massimo, Cattedrale di Palermo and Cappella Palatina are pleasures not to be missed, as is a stint of people watching at the Quattro Canti.

Anyway enough of that, time for lunch. 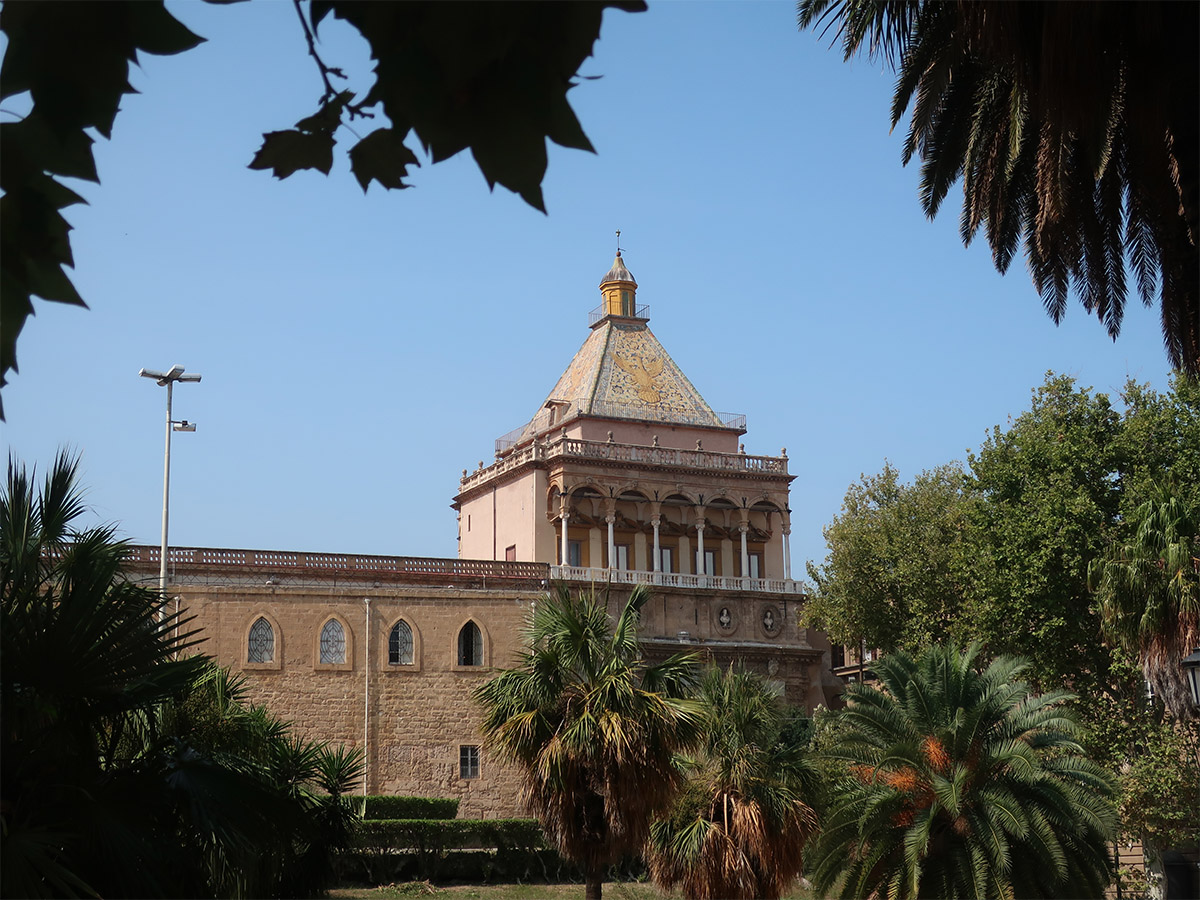 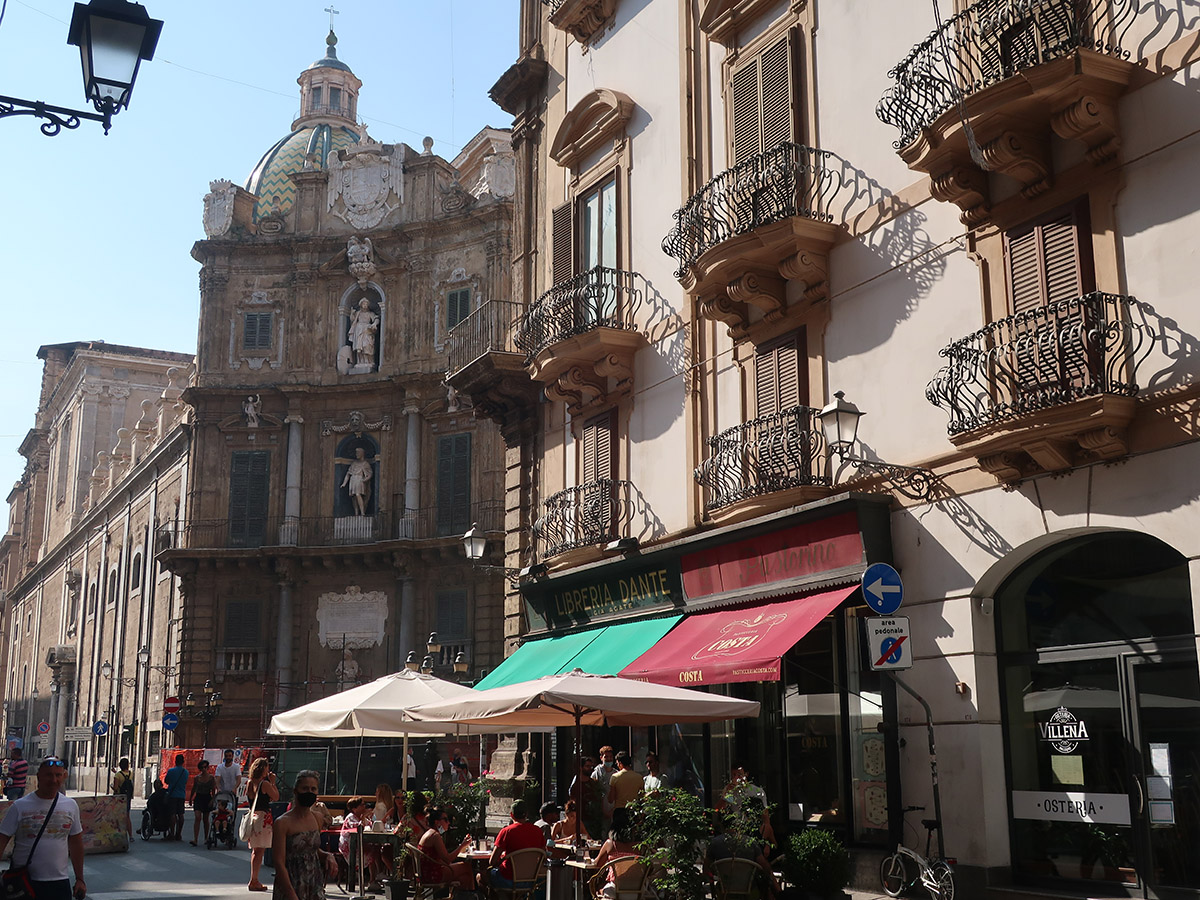 As with much of the rest of this country, as far as I can tell it’s much more difficult to find bad pizza than the opposite. After some deliberation I end up at Pizzeria Tonda, much because they list a topping which features a whole piece of burrata, something like the cream-filled evil twin of mozzarella, alongside prosciutto and a generous crumble of prized Sicilian pistachio. 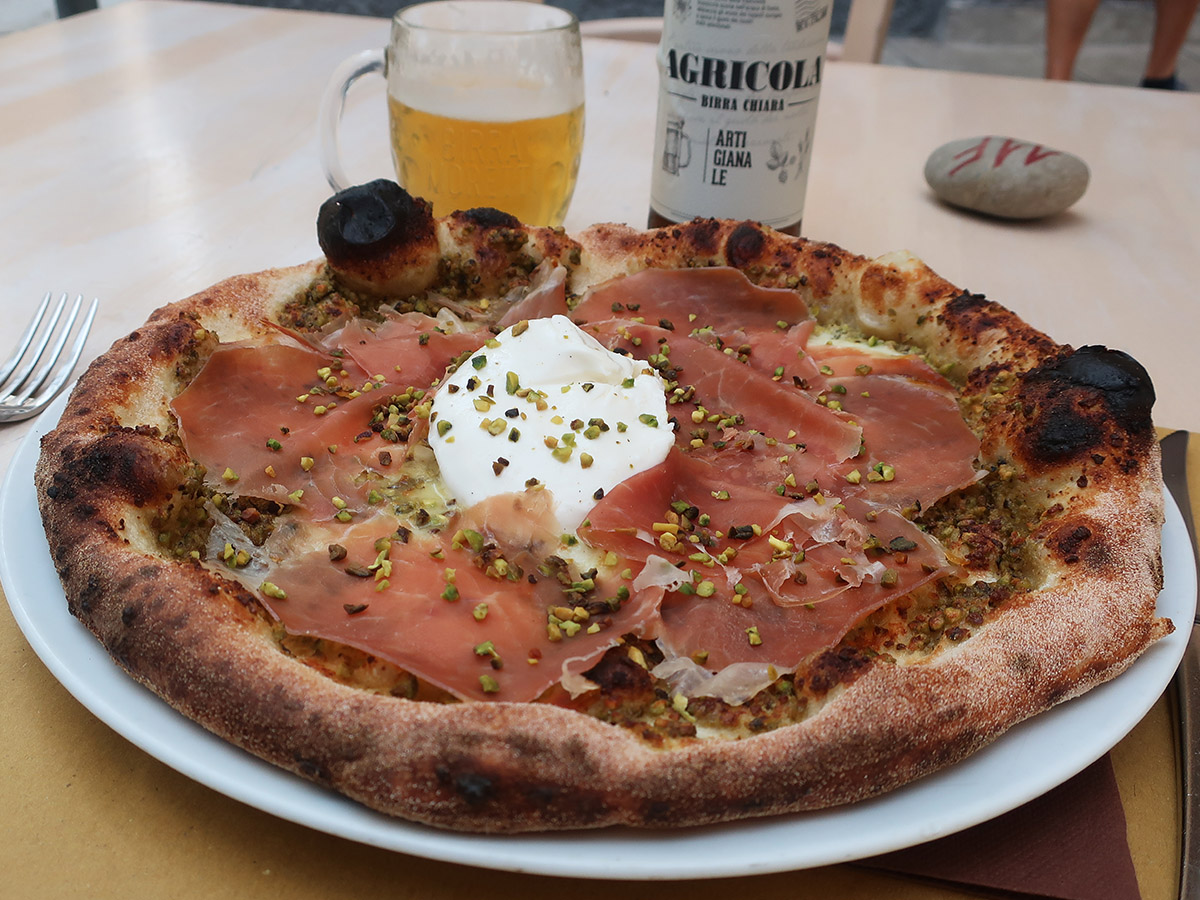 It goes without saying aperitifs are serious business in these parts. In search of the perfect sundowners you could take in the gorgeous views at Il Bar on the rooftop of the Rinascente shopping centre. 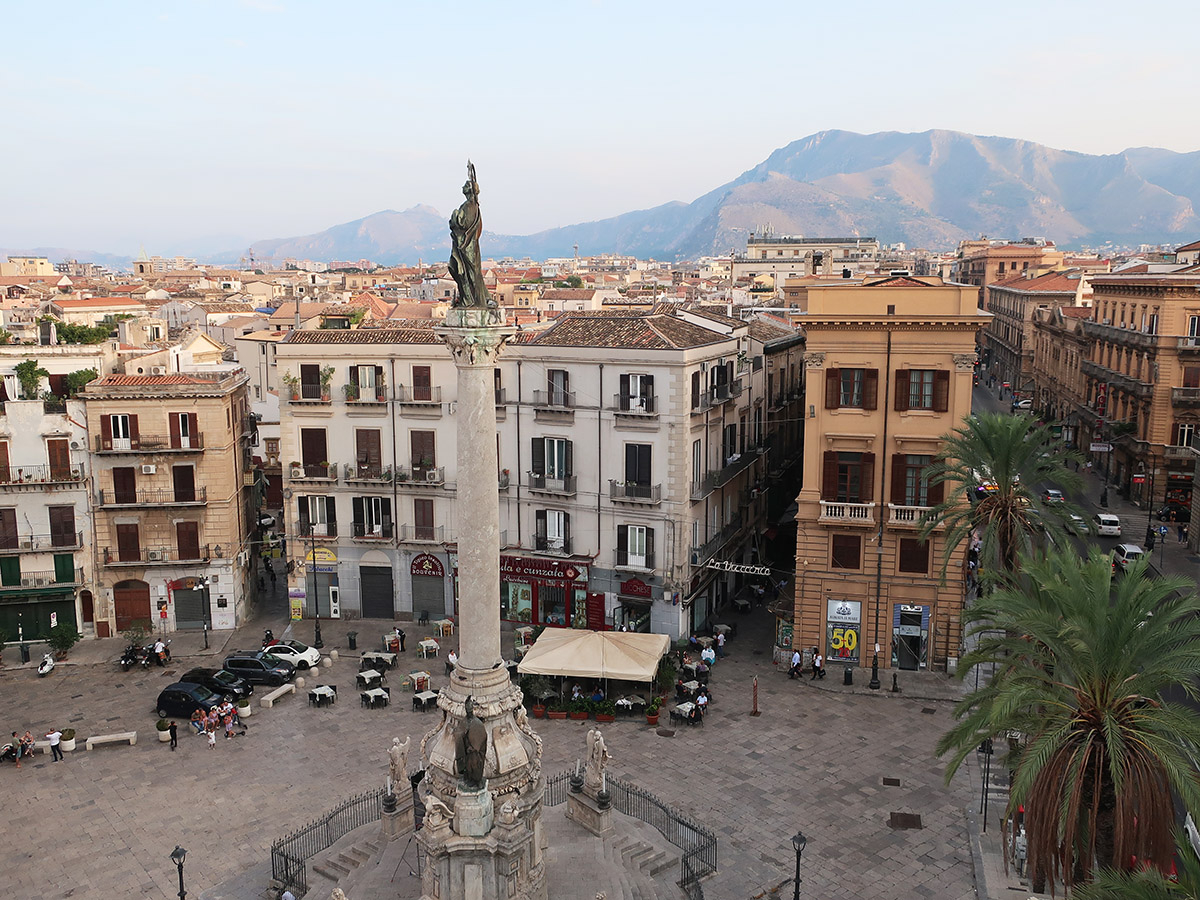 However, if you prefer a friendlier welcome, better drinks and brilliant music then head to Castigamatti Dischi e Bar– a record shop, bar and den of late-night foolery.

Promise you won’t leave before trying the theatrically served Smoked Old Fashioned and Sicilan Spritz, a riff on the classic which switches Aperol for mandarin liqueur and Florio Amaro bitters to forge the sort of nectarous elixir which could simply never be recreated back home. 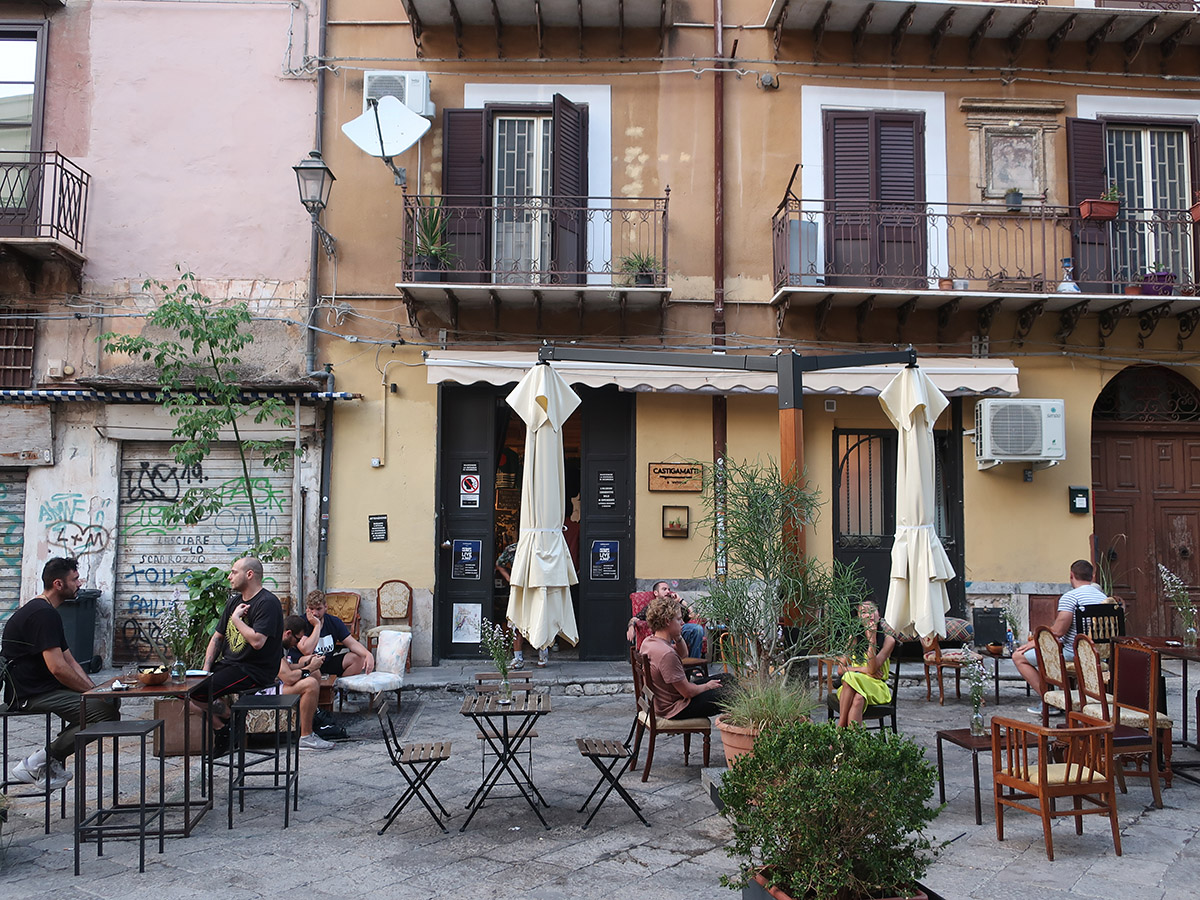 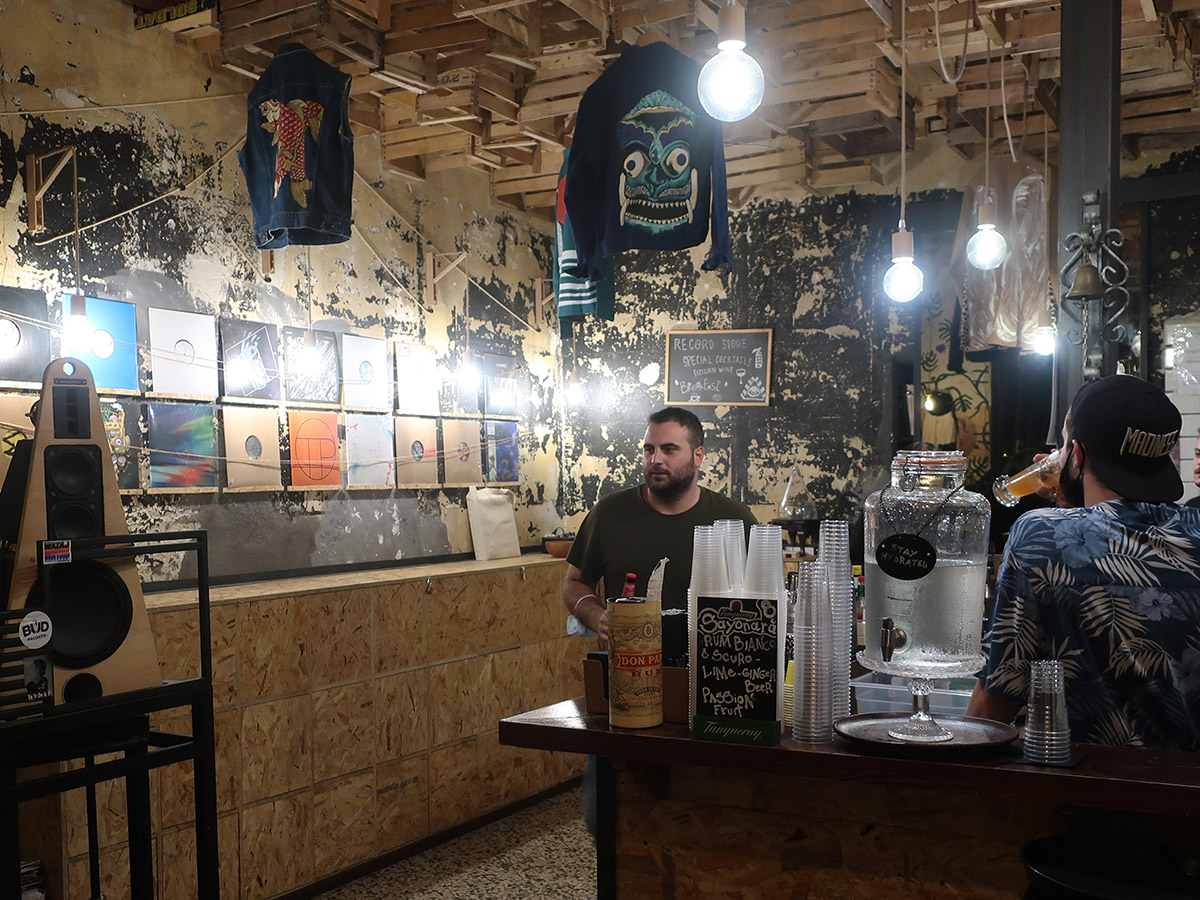 After dark Mercado Vucciria comes alive, and no place more than Ciwara, a Senegalese restaurant and live music venue that always has everyone in the vicinity out of their seat before too long.

It might seem a little strange to recommend dinner at an African restaurant, especially if there’s only a weekend to play with, but taking in the rowdiest of atmospheres and noteworthy fusion food at this beloved setting is the perfect way to understand the fascinating diversity of this city. 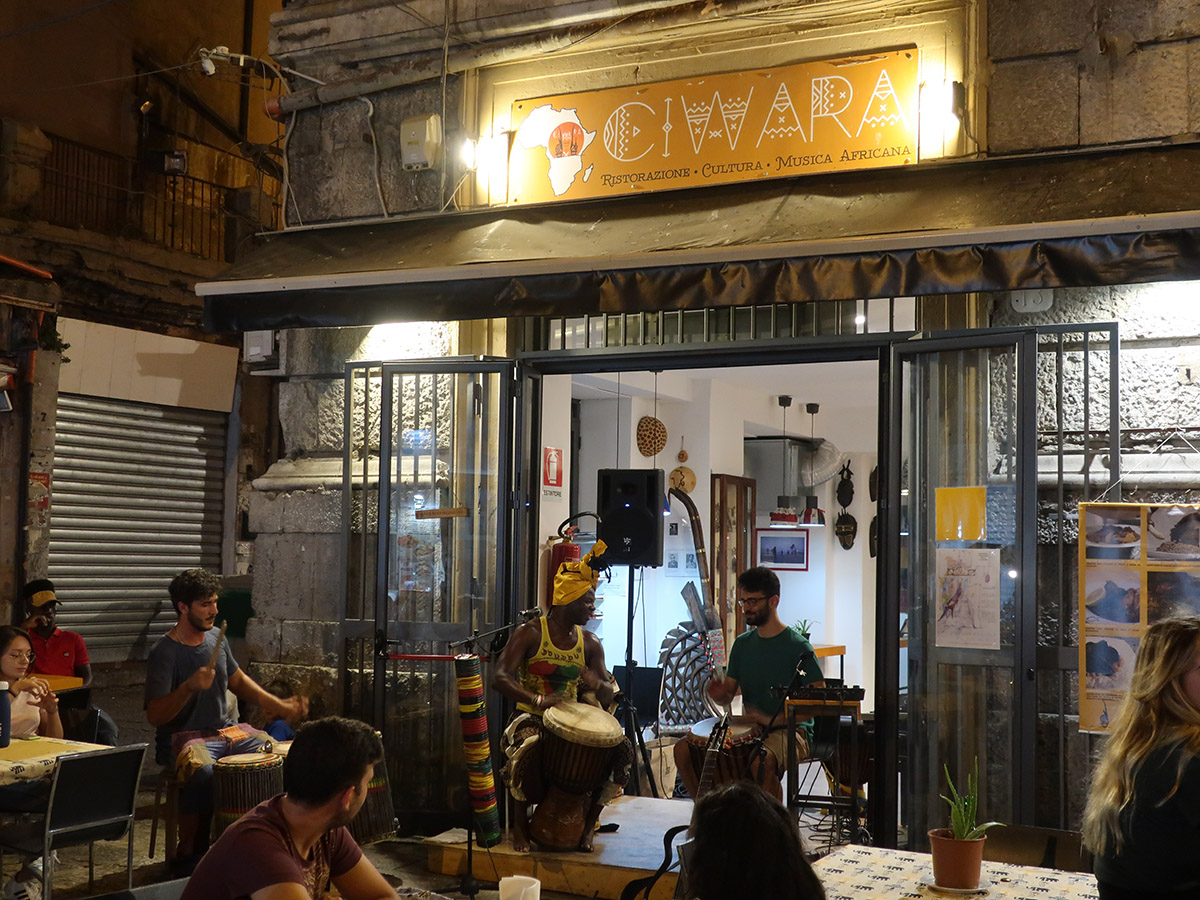 Getting your head down at the ideally-located and lovingly decorated boutique B&B Carella turns out to be an excellent decision. Too busy eating and drinking, I didn’t get the chance to enjoy the bath at the end of my four poster bed, but the breakfast of freshly made cakes, cannoli and savouries is definitely worth making time for.

Housed in a gorgeous 19th century building replete with exposed stone brickwork and just a couple of minutes trot from the Teatro Massimo, these are definitely digs you won’t want to leave behind when the moment inevitably comes. 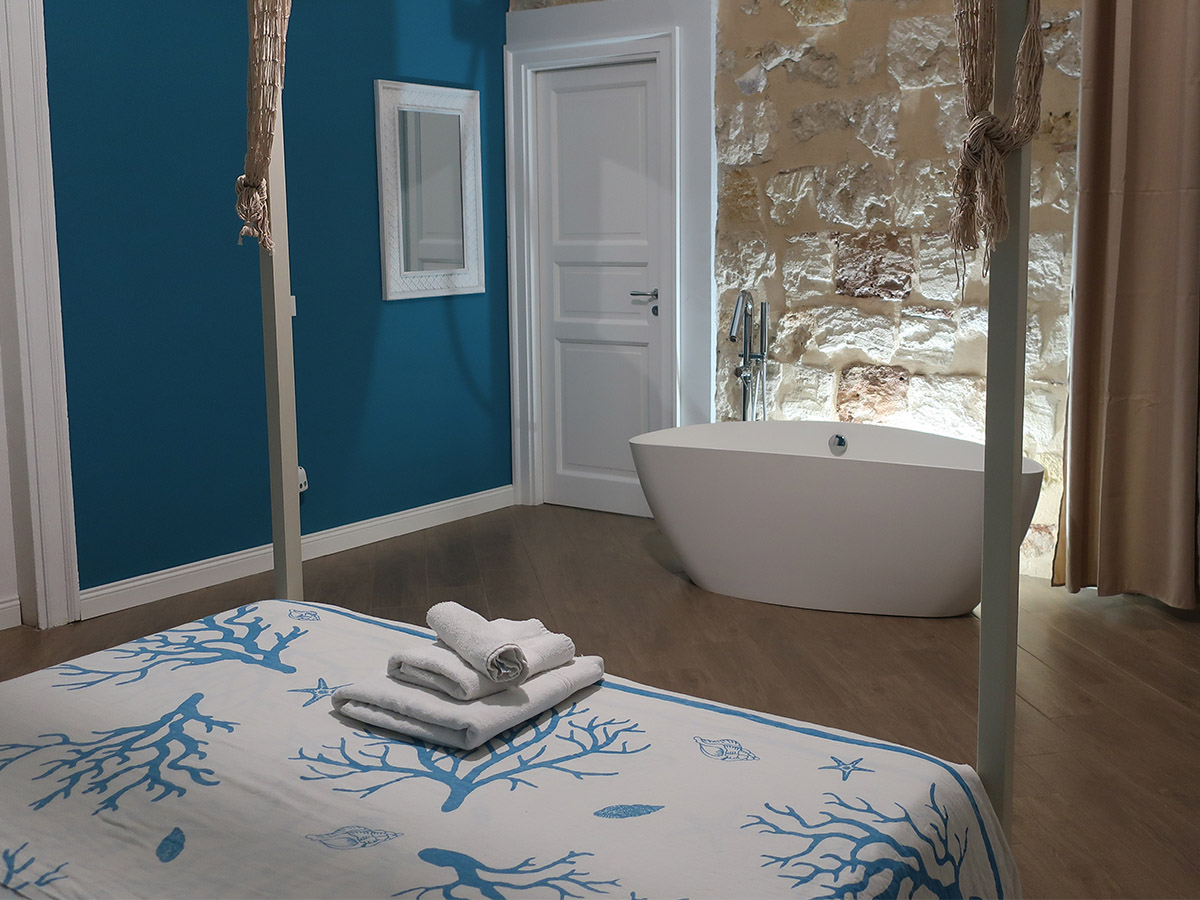 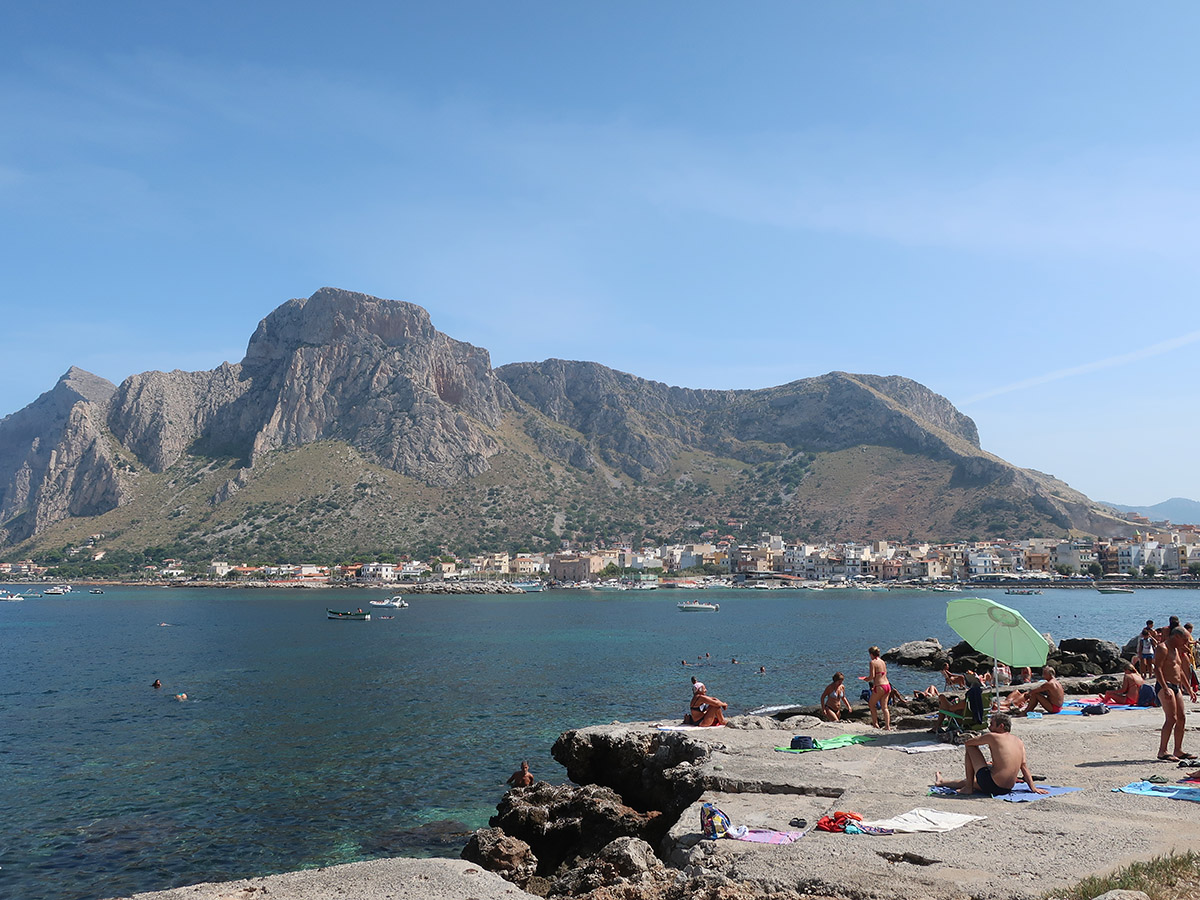 An early-ish start to head out to the beach pays dividends and there are options to choose. Mondello entices tourists with its soft sandy coastline, or after few minutes longer you can reach the cove at Sferracavallo, a ludicrously alluring fishing village, where you might paddle off the rocky shore into turquoise tainted waters before settling down to the freshest possible seafood at any of the many local-packed restaurants. 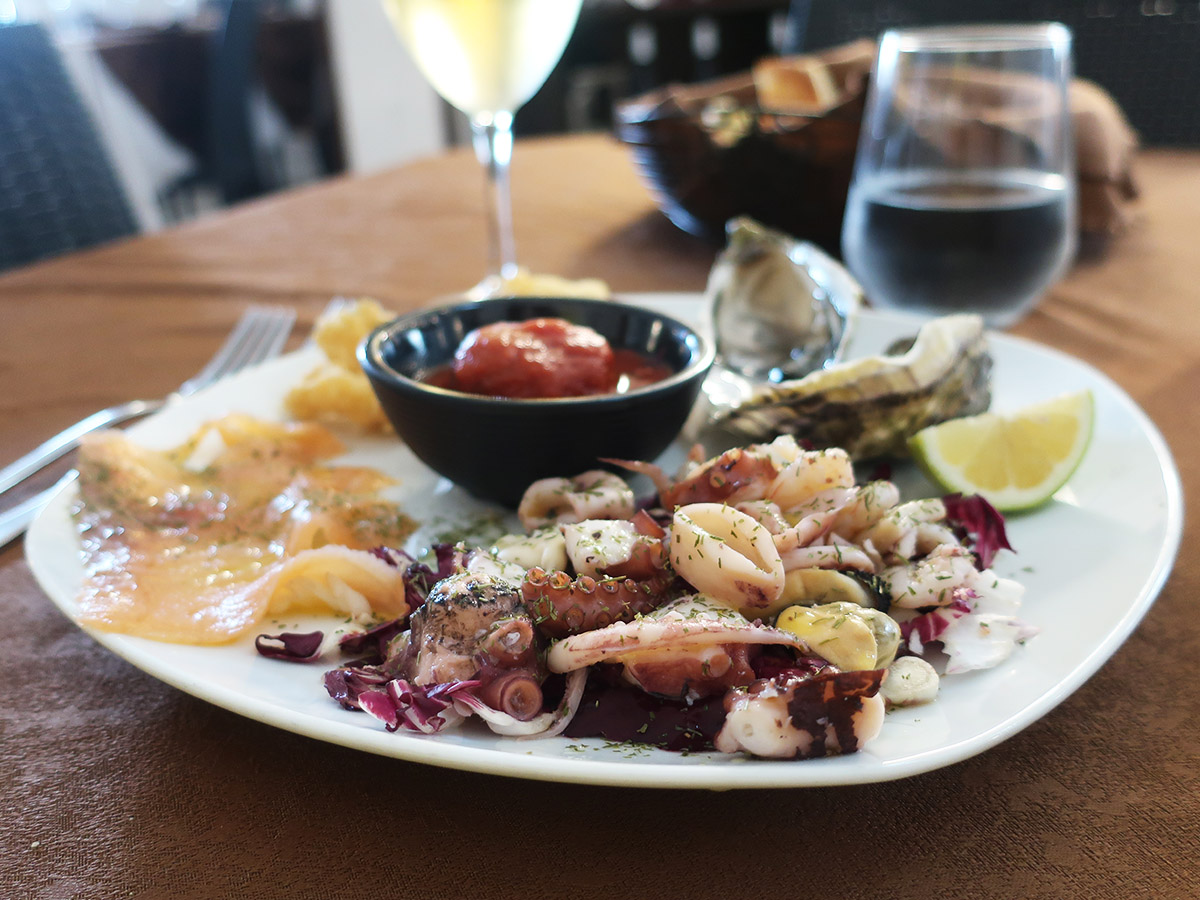 It’s probably difficult to choose badly but I ventured a little inland, away from the main strip, just to be on the safe side.

Like most of the trattorias in town, Il Ristorantino di Michele serve a set lunch of frutti di mare. First calamari and oysters impress, then spaghetti alle vongole seals the deal. Desert and coffee plus a carafe of crisp, ice cool Catarratto are all thrown in for just 25 euros. 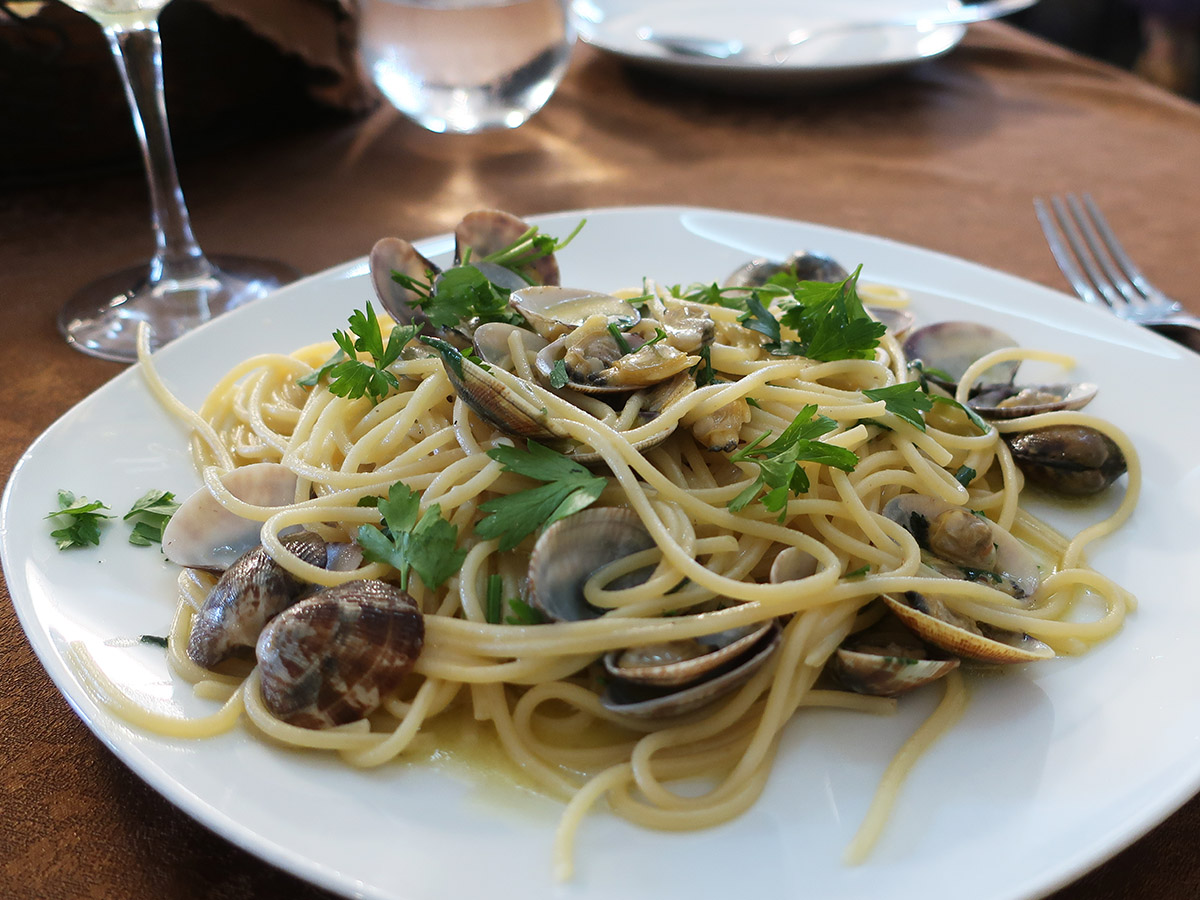 And finally, in the immortal words of soon-to-be-wacked mobster Clemenza’s better half in The Godfather “Don’t forget the cannoli!” It’s hard to say where you’ll find the best, so probably safest just to try as many as possible. 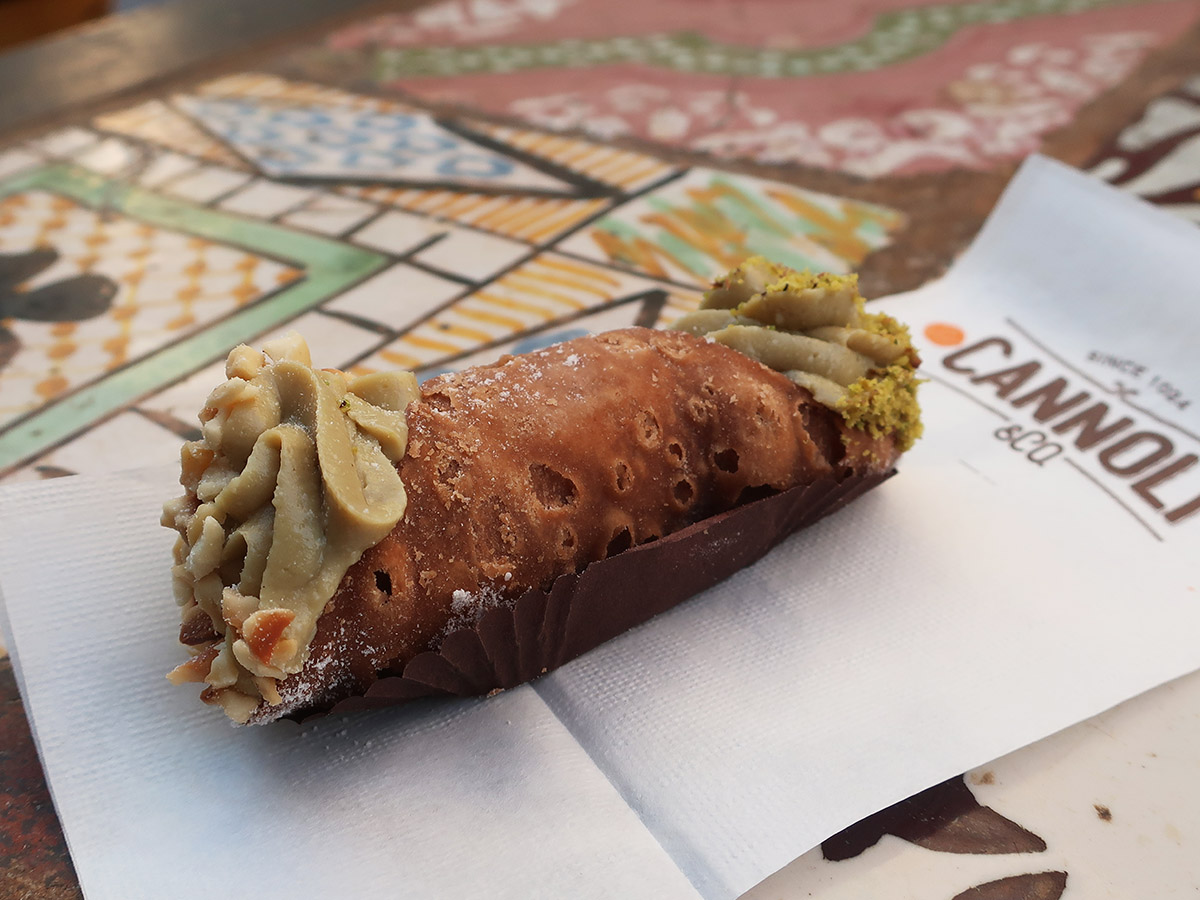 There is so much to discover that a weekend here could never be enough, but you can certainly get a real taste for how much wonderful grub originated in this small part of the world. Often the best food is a form of alchemy, a woman or man making something special out of very little.

Whether that’s born out of a recipe passed down through the generations, or just evolved in an instant from the mastery to create magic out of whatever is available right now, it’s that entrepreneurial survival instinct which has created most of the best dishes on the planet.

History has shown that intuition is alive and well on the streets of Palermo.

Tim enjoyed a street food tour with Streaty, who offer guided eating experiences all over Italy, for more details and to book head here

From Ramona to El Tequileńo: Tracing the roots of Mexico’s best kept secret