The BIGGEST 90’s party ever is coming to Albert Hall

With some super special guests in the form of 90’s legends Shola Ama and Alison Limerick!

I think it’s safe to say that most of the people reading this right now grew up in the 90’s. Even as a man born in 1985 my most enduring memories come from the likes of Euro 96, Oasis vs. Blur and dancing to Chumbawamba at a school disco while wearing a bright yellow shirt from Makro.

It was an amazing time to be alive; where Freddo’s cost about 3p, Space Raiders still had a shred of flavour and Top of the Pops was the best programme on telly. Well, until Gladiators on a Saturday of course.

This Friday 15th March the Albert Hall will be hosting a MASSIVE 90’s party – dedicated to the sounds, tastes and fashions of this brilliant decade and taking you right back to ‘the good old days’ when you had pert skin and didn’t have to worry about paying gas bills.

They’re pulling out all the stops with an amazing cast of performers on stage, alcopops and the best 90’s swagger alongside the decade’s best tunes including plenty of No Doubt, Pulp, Prodigy, All Saints, Skunk Anansie and tonnes more.

That’s not all though – they’ll also be welcoming 90’s legends Shola Ama and Alison Limerick LIVE on stage – to play the massive hits that you’ll remember from your prized NOW 27 cassette tape.

You’ll definitely remember Alison’s hit ‘Where Love Lives‘, and Shola had a string of belters – biggest of which was ‘You Might Need Somebody‘ – a tune that still gets you moving nowadays.

It should be a top night so dig out your Adidas popper pants, a pair of Air Max 95 and go bloody mental… 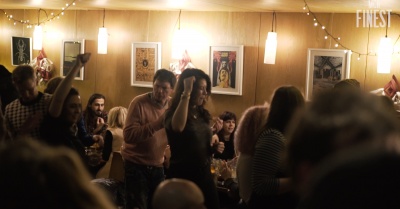