In what could possibly be the city's worst kept secret, the almost offensively ordinary boozer The Bank is housed within the stunning Portico Library with an upstairs that will seriously impress you.

Like a badly edited Tarantino movie I’m going to be flitting between the present, the past and perhaps even the future to examine as much as I can about this boozer/bank/library/miniature Ghostbusters set.

Let’s get The Bank pub out of the way first. I’m sure many of you have been in there for a nice frosty commercial lager and to be fair, it’s not really a particularly bad boozer – ticking all of the boxes you’d want if you’re heading out for a few after-work bevvies.

It seems to straddle that line where everyone thinks it’s a Wetherspoons but it actually isn’t, much like The Piccadilly Tavern and The Lost Dene – where they offer some very similar deals and prices, as well as the obligatory Hunter’s Chicken and pint of Fosters.

Interior-wise the pub manages to attain a certain level of grandeur, with some big imposing pillars and high ceilings, managing to match its rather impressive exterior. Well there’s a reason for this and it all revolves around the library.

The library is still present, located directly above the den of pork scratchings, gin and Texas burgers, and still operates a rather interesting calendar of events and exhibitions alongside the usual ‘get a book and check it out’ activities that you’d expect from any book depository.

Back to the beginning though and around 1792 there was a concerted push to get the Portico Library up and running by a bunch of Manchester businessmen who wanted somewhere that they could keep abreast of the news, read some novels and get some knowledge into the old brain box.

They pulled up their bootstraps and managed to raise 400 subscriptions from similarly minded men and they set about getting the place open. This was 1802.

By 1806 the library was officially open, which, judging by the amount of time it takes builders to get something up nowadays – is pretty impressive. The building was designed by a bloke called Thomas Harrison, who absolutely loved Neoclassical stuff and brought about a bit of a Greek Revival to British architecture – which is why the building looks a lot like somewhere you’d find Socrates pissing about with an abacus.

When it opened, The Portico would have been a literary safe haven for many of Manchester’s academics and intellectuals. Notable members of the library were John Dalton, Sir Robert Peel and Peter Mark Roget and if you don’t know who any of these people are I’m about to hit you with some knowledge…

John Dalton was a physicist, chemist and meteorologist and is noted as being the first bloke in the world to recognise the importance of atoms. His Atomic Theory paved the way for science for the next 200 years, and although (as usual) there are doubts over the validity of his discovery – his contribution cannot be understated. He was also colour blind AF and apparently could only see one colour – yellow. Poor bastard.

Sir Robert Peel was a Tory Prime Minister twice (between 1834-35 and 1841-46) and is regarded as one of the founders of the modern Conservative Party. Probably not worth carrying on really.

Peter Mark Roget created the thesaurus. That sequel to the dictionary which helps uneducated writers to complete ‘Manchester’s 16 Best Burgers’ on a Tuesday afternoon with minimal stress. Although he could have done a better job on the hyperbole, by the time I get to the 3rd burger I’ve run out of ways to say ‘brilliant’.

I should also at this point mention that Eric Cantona was also once a member of the library who if you don’t know who he is then I’ll tell you right now. He was a French bloke who played football for Leeds & Man Utd, always had his collar up and once kicked the shit out of a Crystal Palace fan during a game. He most likely used the library to search for quotes about seagulls that liked to follow trawlers.

All these fellas were in regular attendance at the Portico Library and continued to help pay for it for many years. However, it doesn’t look like they managed to keep the library going forever, as by 1921 they were forced to rent out most of it to keep themselves afloat.

Perhaps it was the invention of the moving picture, perhaps the books that were being released at the time made Dan Brown look like Shakespeare or most likely the impact of the First World War (and later the influenza outbreaks of 1918) created a lot less educated men in which to populate and use the library.

The library moved upstairs, renting out the bottom floor to the Bank of Athens and then later Lloyd’s Bank before the place was boarded up and quickly transformed into a bog standard boozer with an unimaginative name. 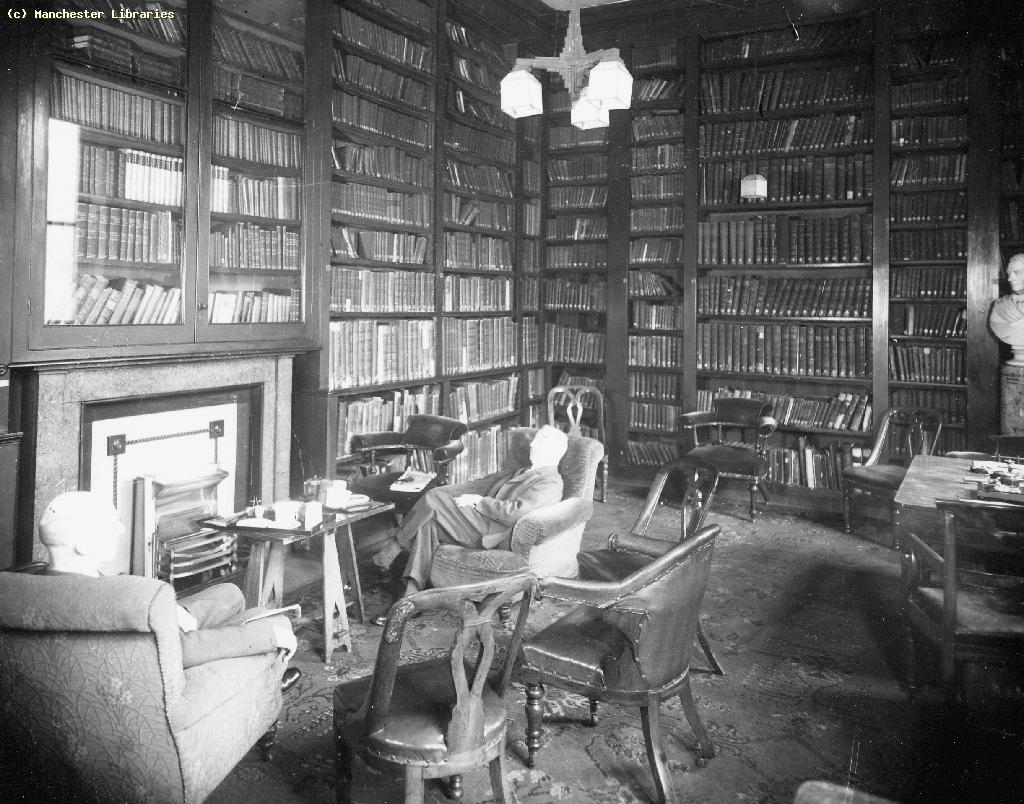 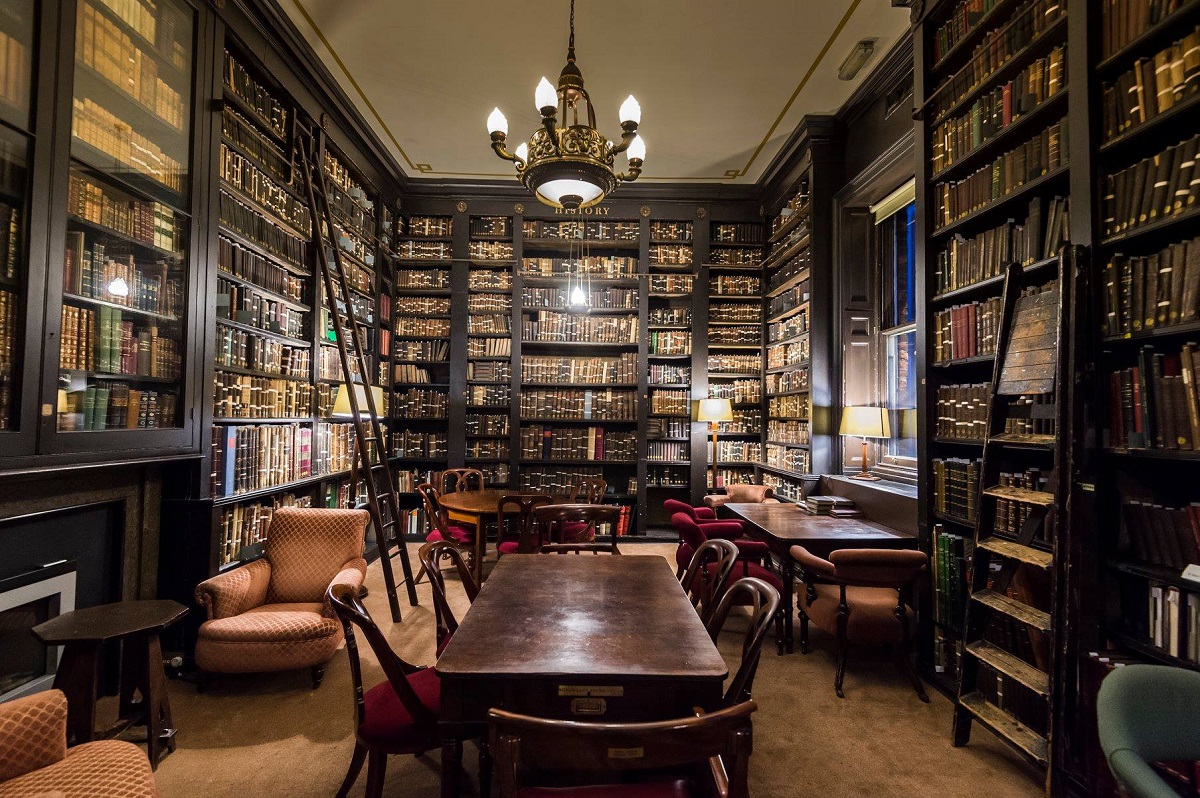 You’d find the library today much as it has been for many years previously – not only is it adorned with walls full of books like in Beauty and the Beast, but the books and collections themselves are rather special. There’s a wealth of travel literature, natural philosophy, poetry, history and maps and unusually for a 19th Century collection – a lot of first edition fiction novels.

The place truly is a Manchester treasure trove, and they have many frequent exhibitions and events that show off some of the diverse publications they hold. I highly recommend getting involved in some of these events or perhaps even becoming a member (if you are so inclined).

You can check out what’s going on in the library below, and perhaps have your chance at exploring one of Manchester’s greatest hidden gems.