This colossal building absolutely dominates Portland Street and seeing as I spend 35 minutes a day staring at it while shuffling around on a cross trainer I thought it apt to explore its history.

I should actually probably start with the building now, which as most people know is being used by the Britannia Hotel group as its flagship hotel in the city.

As a company that has been voted the worst UK hotel chain for 6 years now, Britannia certainly aren’t defying their critics down on Portland Street, and as someone who has had the misfortune to stay, eat and drink here – it should really be avoided.

There’s no denying that the building is stunningly impressive though, with both its imposing size, architecture and lights (many of which unfortunately need replacing) all creating something that we should be fiercely proud of as a city, a shining beacon of our past and culture for anyone that visits.

Unfortunately, what they are faced with is a substandard hotel, manky rooms and a couple of bars in the form of Wave and Rogue where even a seasoned Oldham-born frequenter of rough boozers like myself typically thinks twice before stepping over the threshold. (Which has actually only occurred three times, mainly due to an excessive amount of cider and black.)

Right, so it’s pretty shite now. That has been established not just by me but by pretty much everyone in the city (and beyond). But what about the building and its history? Well here goes…

Originally called the Watts Warehouse, the building, like 90% of all of Manchester’s, was an integral cog in the Industrial Revolution machine, serving as a textile warehouse for S & J Watts when it was built in 1856.

The head honcho at S & J Watts was James Watts, a very prominent figure of the time, who when he wasn’t raking money in from his textiles he was schmoozing politicians, and associating himself with royalty.

He was the Alan Sugar of the day, pulling himself up by his bootstraps to move from a small weaver’s cottage in Didsbury to eventually becoming the Mayor of Manchester, the High Sherriff of Lancashire and even bagging himself a knighthood in 1857 from Queen Victoria.

In fact, he was so chummy with the royals that Prince Albert had a few sleep overs at his house and he once had Queen Victoria round for a roast dinner, which didn’t end well because he burnt the roasties and forgot to dish out the horseradish with the beef. Apparently Vicky wouldn’t eat the stuff without it.

Anyway, he was a bit of a big dog and his warehouse on Portland Street certainly looked to reflect that.

The architecture is rather ornate, with an array of weird design flourishes. For example, each floor is in a different style, and a closer look uncovers a mixture of Elizabethan, French Renaissance and Flemish architecture on each floor with the roof being polished off with some huge Gothic wheel windows – looking just like that church thing in Notre Dame.

Even with recent additions of flags, billboards and general crud, the building still maintains an impressive demeanour, and certainly deserves to be more than a run-down old hotel.

Another oddity one may notice is right inside the main entrance, immediately on the right as you walk in. It’s a World War I memorial statue, tucked away in its own little cubby hole that you might not notice as you walk past.

This memorial was placed inside the entrance of the warehouse to commemorate the young employees of S & J Watts who lost their lives during the Great War. Named ‘The Sentry’, it was designed by Charles Sergeant Jagger and has the inscription:

To the enduring memory of those members of the staff of S & J Watts & Co. who laid down their lives for their King and country in the cause of truth, justice and freedom during the Great War. Their name liveth for evermore.

After a brief stint with some Nazi bombs in the Second World War, the warehouse spent most of the remainder of the 20th Century in disrepair and dereliction, only being saved from demolition in the late 70’s and turned into the hotel we know and love in 1982.

Since then the hotel has had many famous guests, once being home to New Order, The Fall, Morrissey, and the Buzzcocks during a 1986 Festival of the Tenth Summer at the G-Mex.

It’s also famed as the location where the Stone Roses’ infamous Silvertone contract was signed – which later came and bit them in the arse and ended up being a right messy affair involving court battles, album delays and of course – Second Coming.

It is also well known as being the hotel where I stayed for a night in 2007, which lacked windows and stunk of a particular sinister type of cheese.

So there’s plenty of history in the Britannia, and with it being such an impressive architectural marvel, should the people of Manchester rise up against the corporate overlords, demand it’s return to us, renovate it and make it something that the city can be proud of again?

Probably yeah, but in the meantime, at the very least – get yourself to La Baguette on a lunch time. It’s the only thing in the building that will put a smile on your face I reckon. 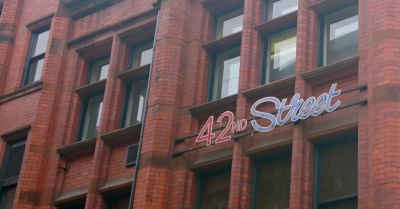 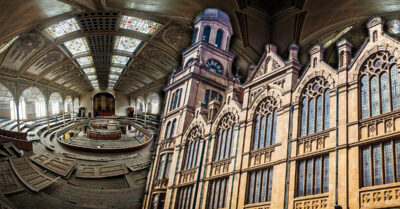 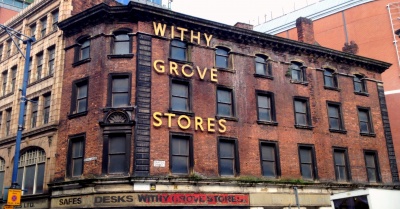