After being in the public consciousness for well over 50 years now, and hitting the big time in the 90’s with the top Barry Sonnenfeld films, The Addams Family are coming to Manchester with a live theatre performance at the Lowry.

The plot revolves around everyone’s favourite Goth – Wednesday Addams, who has unwittingly fallen in love with a bloke from a ‘respectable’ family. Like a good girl, she’s told her dad Gomez, but Gomez now must do something he’s never done before – keep a secret from his wife. Featuring all the favourites including Uncle Fester, Lurch and Pugsley, the show looks set to bring a few more creepy characters to Salford than you’d usually expect.

Starring in the production is Samantha Womack as Morticia, Les Dennis as Fester and Carrie Hope Fletcher as Wednesday. Womack has recently finished a decade of working in perpetual sour-face-hell-hole Albert Square as Ronnie Mitchell so it must be refreshing for her to finally join a family that’s a little bit normal. Although Phil Mitchell does indeed look a bit like Uncle Fester, Les Dennis will be playing the legendary lightbulb chewer – hopefully without a Mavis Riley impression.

Carrie Hope Fletcher as Wednesday has previously appeared in Les Misérables, Chitty Chitty Bang Bang, War of the Worlds and plenty more, so the whole thing will be in good hands. There’s a long list of exceptionally talented and experienced people attached to the show, but it is Friday and I’m too lazy to list them all here. But know this, there’s a lot!

The Addams Family is touring the UK and Ireland for ages, and will be in Manchester from the 29th August until the 9th September.

For tickets and more information visit The Lowry website. 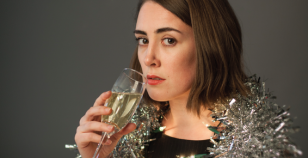