Six Street Artist You Should Know About

Once upon a time (roughly twelve years ago), graffiti was considered a crime. It doesn't matter if you adorned a wall with a beautiful, poignant design or wrote 'Karen has big tits' in red Sharpie- an ASBO was coming your way.

Times have changed though. The rest of the world has seemed to have caught up with cool places like Lisbon, Berlin and Los Angeles and now Street Art is a celebrated art form in its own right and we are lucky enough to have some smashing pieces right here in Manchester by some pretty notable names.

Martin Whatson
If you like the Banksy style but are a little bit over the whole in-your-face political message vibe, then you will probably love Martin Whatson. His method usually consists of a black and white centre (usually a life-size person) with small colourful graffiti designs spilling from it. His work is full of energy, and I like that it has a nod to the history of traditional street art in his design. On Faraday Street you will find his tree in beautiful shades of green- it depicts a monochromatic man painting the artwork on the wall, and it is safe to say it brightens up the walls of rainy old Manchester. 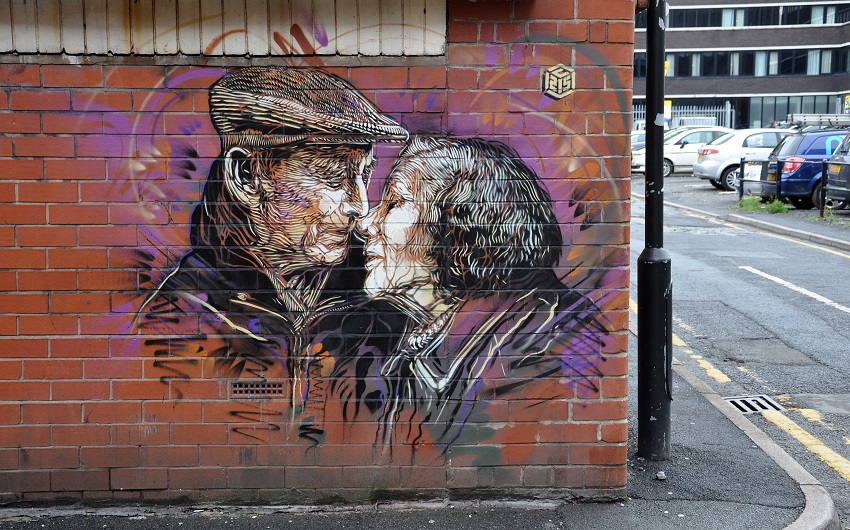 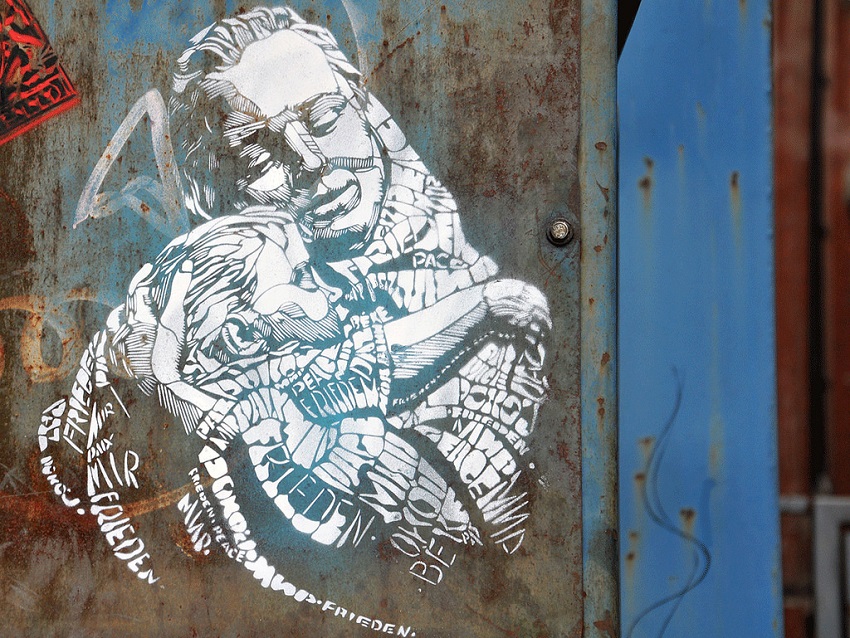 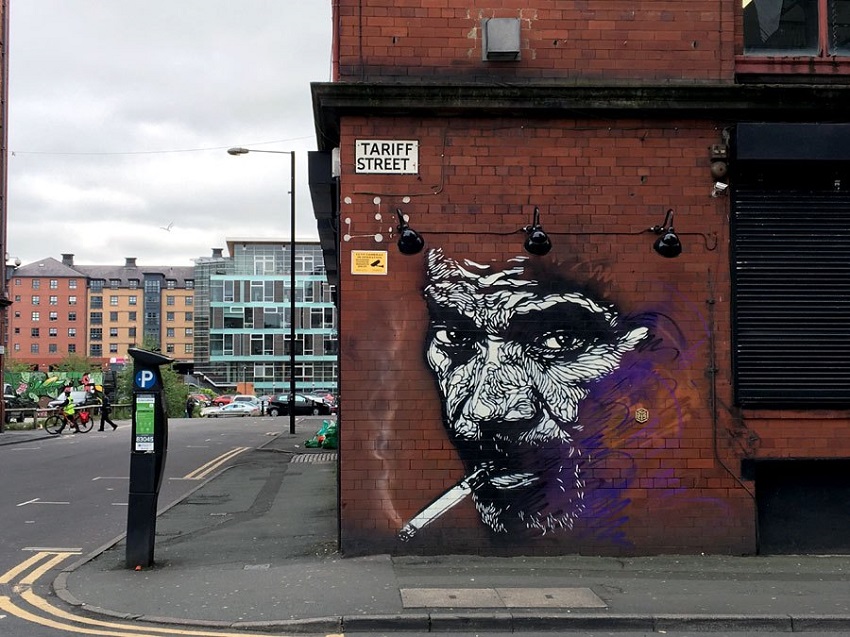 C215
C215 is a stencil artist from Paris who is often described as ‘France’s answer to Banksy’- which is mega awkward if Banksy is French but we have no way of knowing. He likes to focus on portraits, typically the people in our society who are often ignored for example the elderly, the homeless and those seeking refuge. He is also a big fan of Renaissance artist Caravaggio which you can watch him talk about here.  His work often takes inspiration from his human studies, history paintings and allegory which is interesting when it is taken out of the gallery context and placed on the street.

TankPetrol
Hailing from Poland, TankPetrol is a street artist that specialises in both stencil and freehand work. He is now based in Manchester and is well known for his detailed, fantasy style works that mainly depict women dressed in a military style with various props and animals, geometric shapes and typography. That has to be the worst description I have ever given. His Anthony Burgess behind Tib Street is my favourite- I like that it is a largescale project and that it celebrates a little slice of Manchester History. 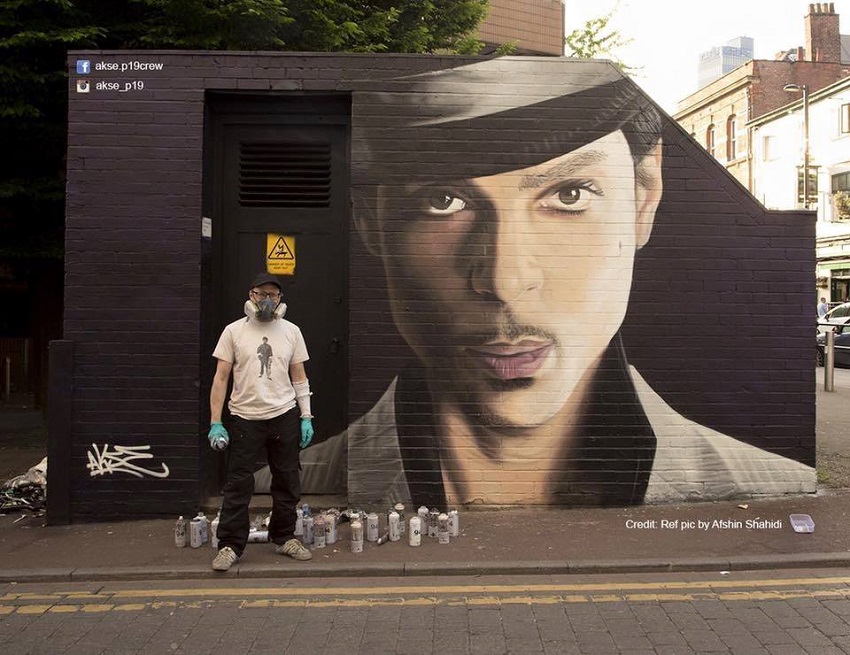 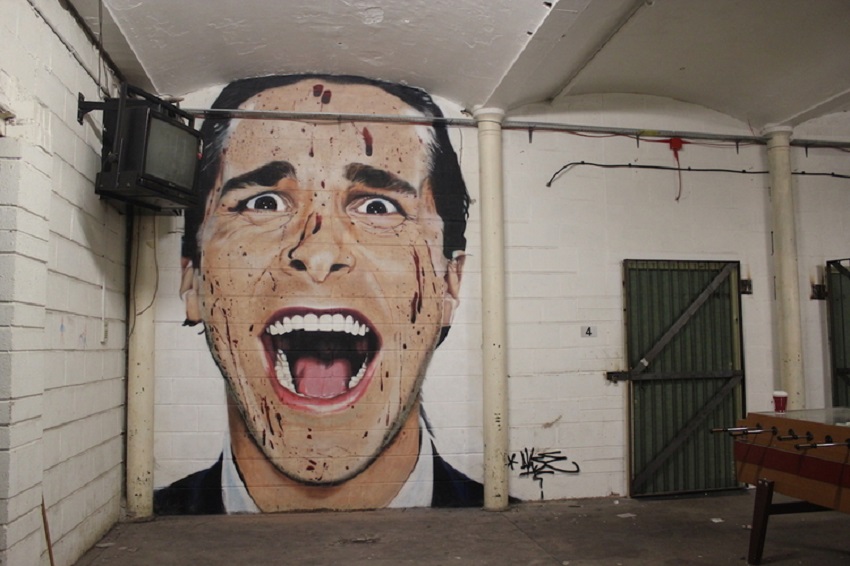 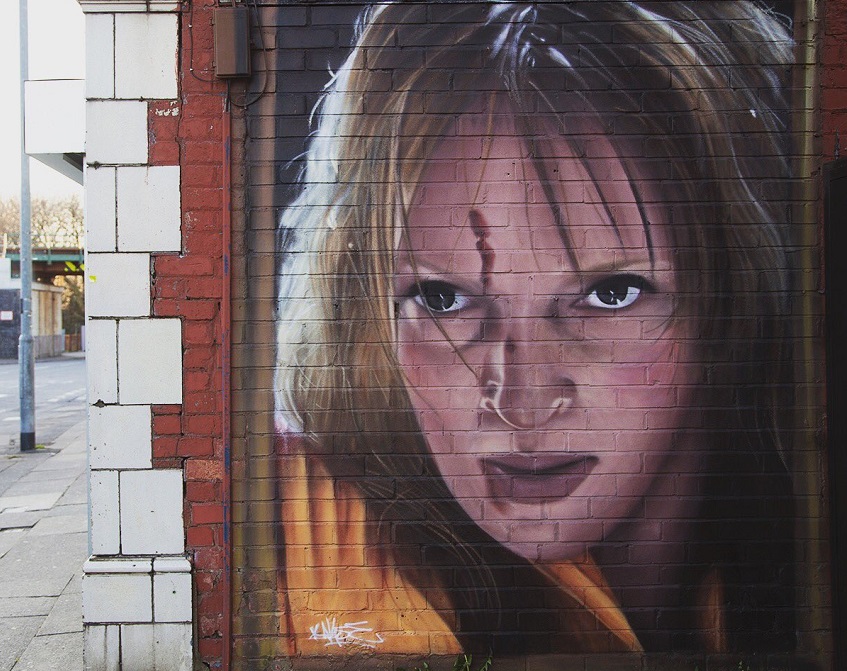 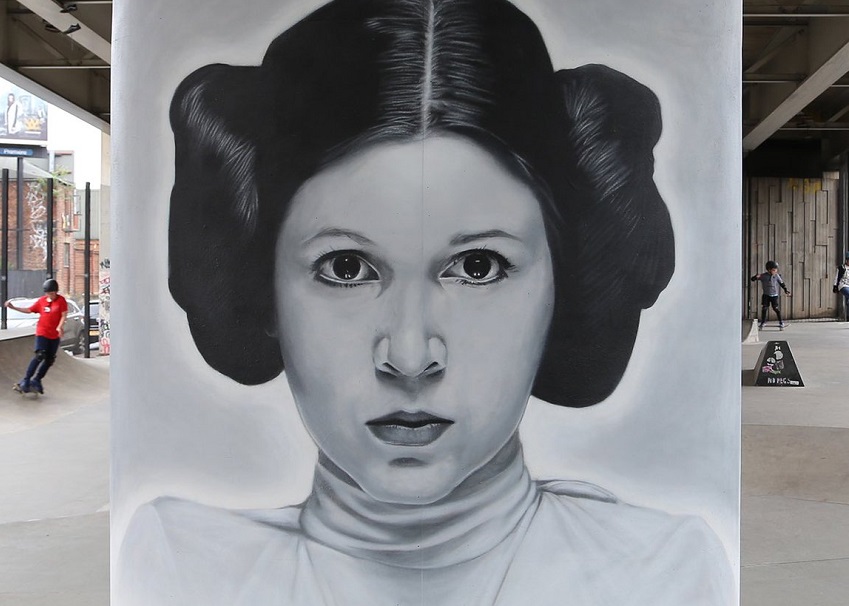 Akse P19
This chap is a French graffiti artist with Vietnamese origins who is now based in Manchester. He has been here knocking around since the late 90’s, and his work focuses on super high definition portraits of characters with photo-like realism. There are loads of his works in and around Manchester- most famously would be the blood-splattered face of Patrick Bateman at Wellington Mill in Ancoats as part of his Psychopath series or the beautiful Princess Laia at Projekts MCR which always gives me the feels since the passing of Carrie Fisher last year.

Phlegm
Firstly, I would just like to point out that I did not know that is how that word was spelt. I thought it would be something a little more like ‘flem’ or ‘flemme’- but hey, we learn something new every day. The artist Phlegm takes his names from one of the four humours from Greek Mythology- blood, black bile, yellow bile and phlegm. Anyway, this guy who has taken his name from something we spew up when we have a cough has left his mark on loads of walls across the UK, and he has a giant artwork on the side of the Swan Buildings at the top end of the NQ and one in West Didsbury I believe. His work is strictly illustration- based on detailed compositions of odd figures with a narrative structure. The characters emerge from his extensive collection of cartoons and can often be found in their surreal beauty on the sides of buildings in urban spaces across the UK. 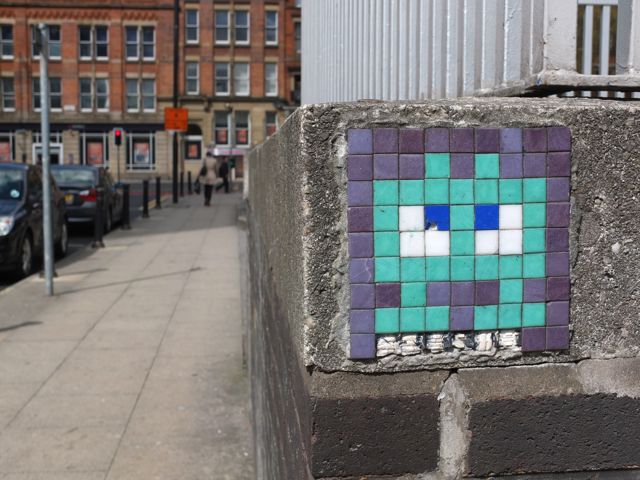 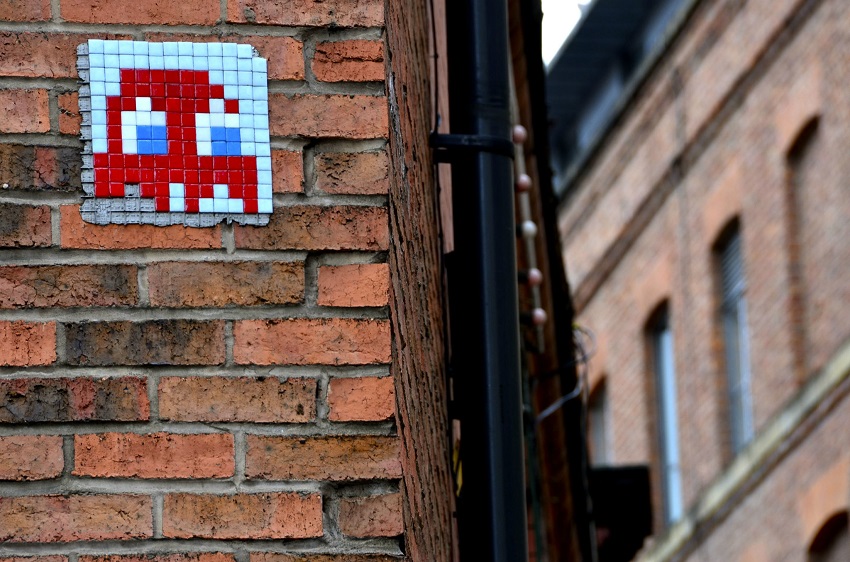 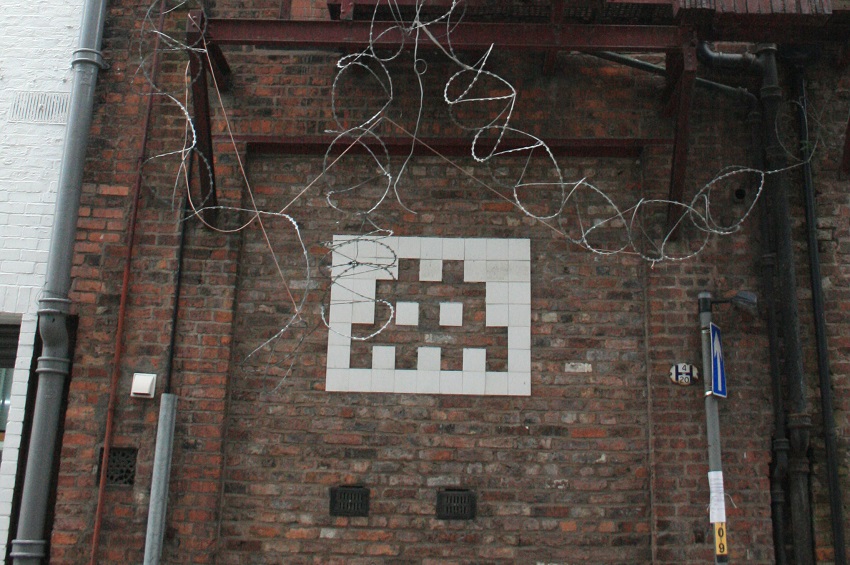 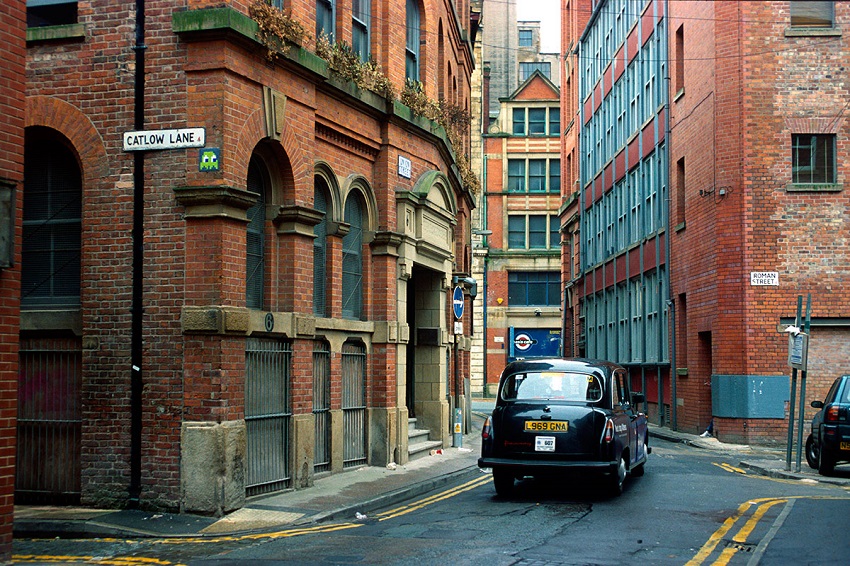 Invader
An incognito French urban artist who works by night on a global-wide project putting mosaic space invaders on the sides of buildings. The project began in the 1990’s in his local area and then expanded across France, into Europe and eventually China and the US. The mosaic style is representative of the 8-bit graphics of the arcade games of the 1970’s and 80’s, and in his artworks, each tile represents one pixel. There are a total of 3581 Space Invaders out there spread over 74 cities, and Manchester is home to 47 of these bad boys.

Journey through India with Zouk: The South