In 1995 Robson & Jerome stole the nation's hearts and sang 'Up On The Roof' to critical acclaim.

Not only were these boys devilishly handsome but they could belt out a tune to rival even the most well-respected crooners.

They managed to sell CD singles by the shed load and both subsequently went on to become national treasures. The only reason I’m mentioning them is because they sung a cover of that song and this is an article about being up on the roof in Manchester’s best roof top spaces… 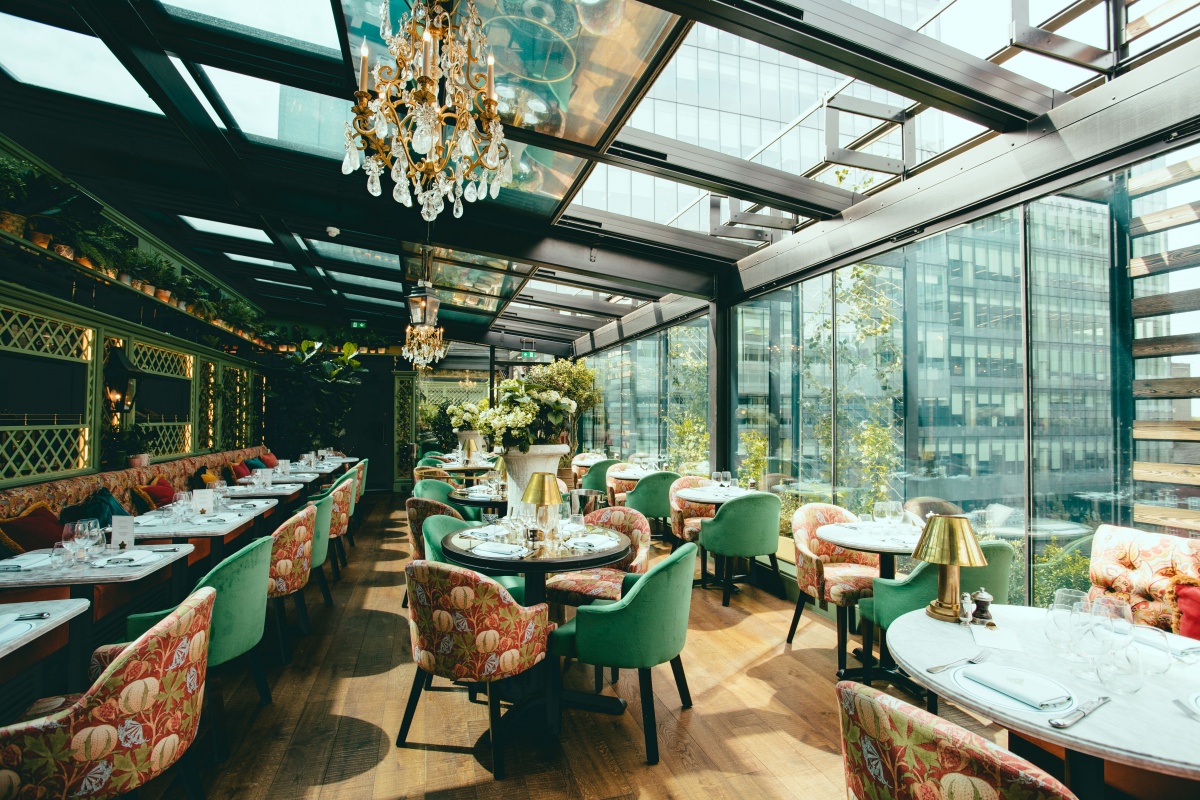 The Ivy Spinningfields
The Ivy might not be everyone’s cup of tea but I personally think you should visit here at least one in your life – just to tick it off the list. If you can get yourself up on their Rooftop Garden – even better – as it not only provides some lovely views of the surrounding areas, it’s also been decked out really well – almost as if Laurence Llewelyn-Bowen has had free reign to do whatever he likes. It looks fantastic and actually – the cocktails here are excellent – you can spend a fair few hours in luxury up here and have the best day ever. 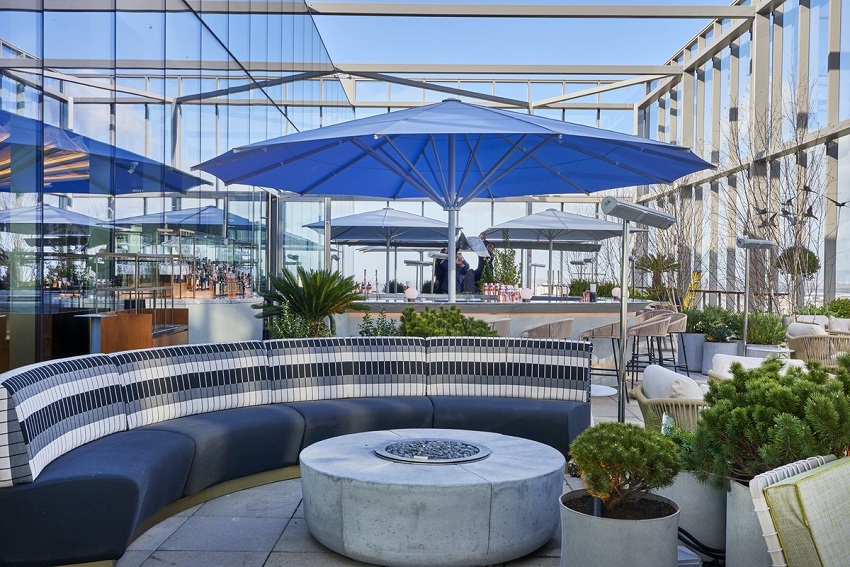 20 Stories
This bar and restaurant has quickly scampered its way up to the most Instagrammable spots in Manchester list without even breaking a sweat. Housed at the top of the much anticipated, shining glass beacon that is No. 1 Spinningfields… 20 Stories up which hardly takes an architectural boffin to work out where they got that name from. The beautiful terrace contains actual trees, outdoor fireplaces and lots of places to bask in the sun with a couple of cocktails – not to mention probably the best view of Manchester there is. 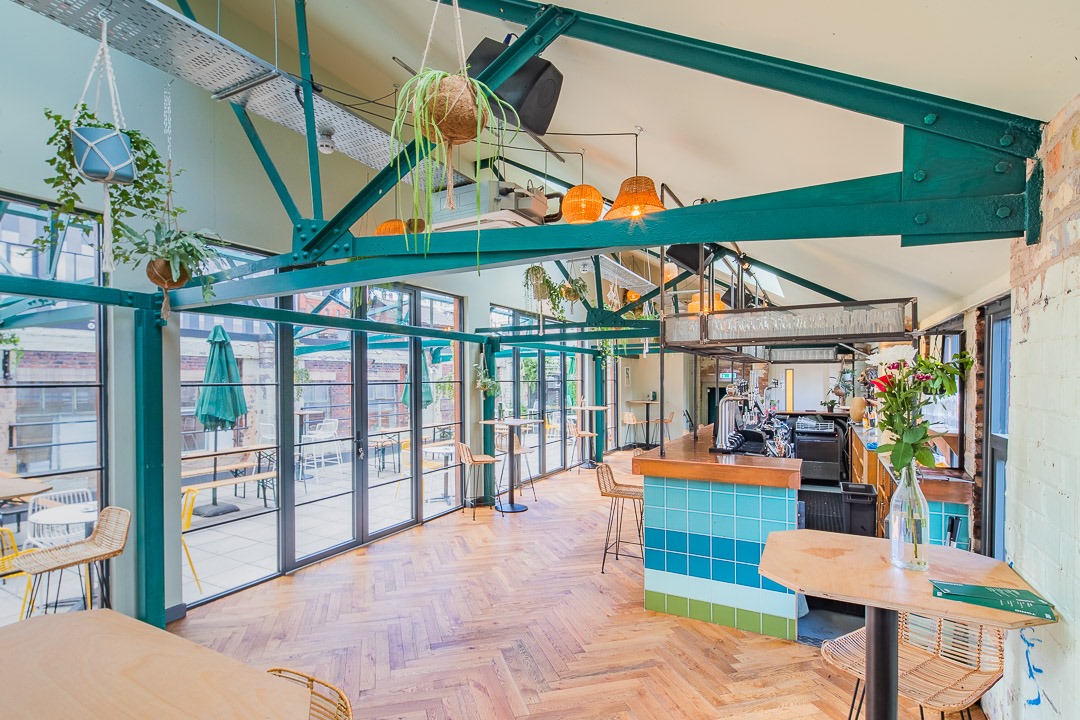 YES
The first time I ever went to YES I ran up the stairs like a 7-year-old going to bed after watching a scary movie, ignoring pretty much every single thing on the first 2 floors. Pizza and beers? Don’t care. A PINK room? Not bothered. What I only actually cared about was checking out their rooftop bar – one which has seemingly been inspired by those sexy NYC ones you have a £15 pint in when you go over there on holiday. Luckily for us all – pints are only about £3 in here and the space – is gorgeous. 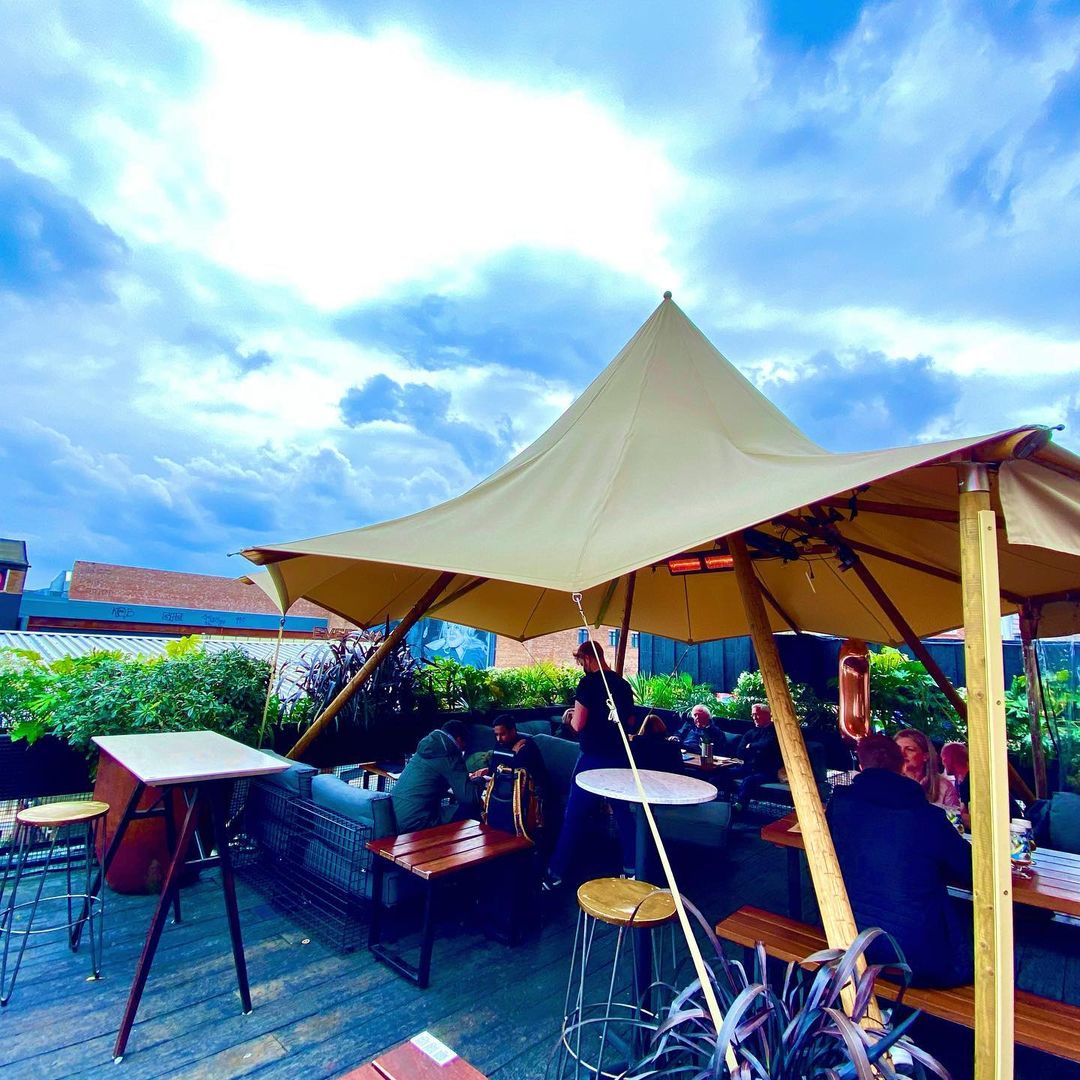 The Con Club
A hidden rooftop oasis right in the centre of Altrincham, not many people know that The Con Club is packing such a beauty – which makes this place a whole lot better as you’re more likely to bag yourself a spot. It’s a proper little sun trap up here and so if you’re particularly fair or ginger – wear a big massive hat or tonnes of sun cream. Enjoy alongside a glass of Frozen Rose or a super-strong cocktail and some sushi from the Unagi lads. Terrace NQ
I always think this one is a bit of a hidden gem. How often are we stuck in the Northern Quarter gasping for a pint in the sunshine and not being able to think of somehwere to go? Fear not- Terrace NQ has a little secret terrace up the stairs and it is cute AF. Clue is in the name I guess, but for a long time it didn’t even clock. Small and cosy with simple furniture, fairy lights and a great atmosphere and when you come at the right time it can be bathed in sunshine. There isn’t a view mind, but for a little bit of privacy at this hidden little spot, it is a price we are willing to pay. If you haven’t drank there before, they have a cracking choice of beers, spirits and wine to boot- and it has summer 2018 written all over it. 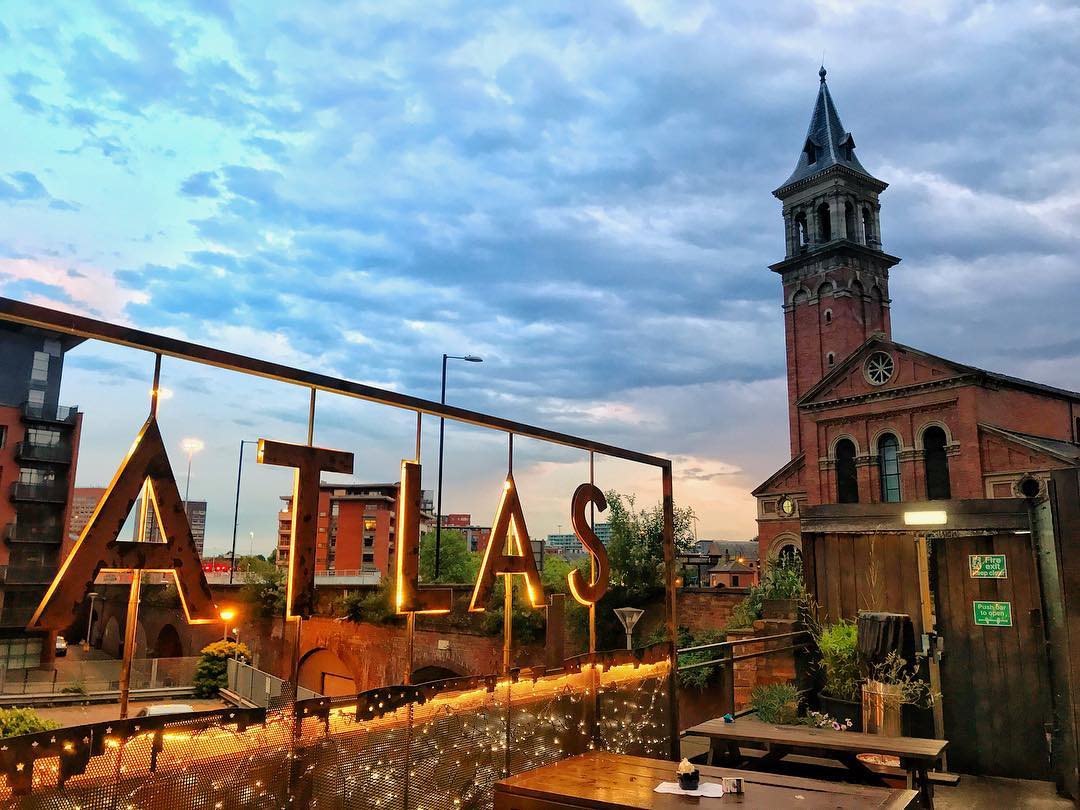 Atlas Bar
Is Atlas Bar’s terrace a ‘rooftop’ terrace? It’s not actually on the roof of the bar – more round the back, but it is actually on the roof of some mechanic or something in the arches below so it’s here on this list. It’s easily one of the best terraces in the entire city centre, and with a choice of over 300 gins – this gaff is easily one of the most desirable locations in Manchester when the sun comes out. 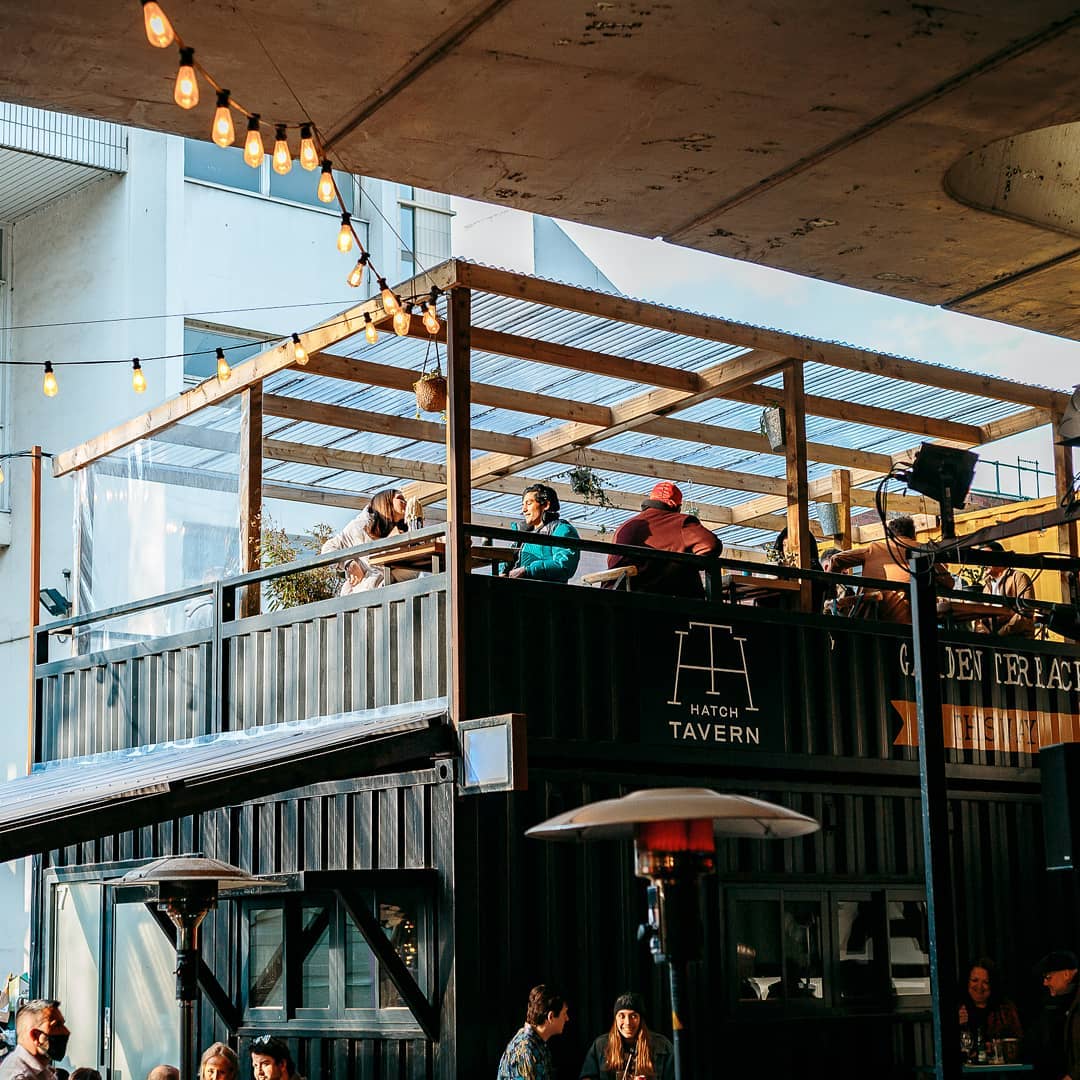 Hatch
I know what you’re thinking. You’re thinking – well, Hatch is under the bloody Mancunian Way, so there’s no chance of getting a rooftop terrace you idiot! Well, you’re right. But you’re also really , really wrong as the Hatch lot have got rather creative with their use of space and created a couple of rooftop bars which get the sun for most of the day. Grab a few beers, order some food and enjoy. 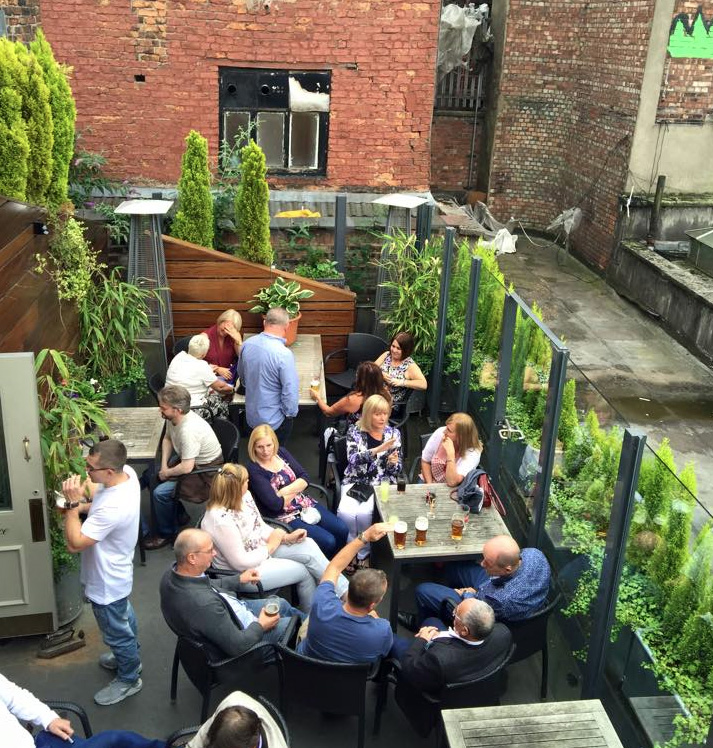 Lower Turks Head
After years of being derelict, the Lower Turks Head was given a This Morning-style makeover and is now one of the more decent, proper boozers in the city centre. As well as loads of wood and booze, there’s also a big roof terrace upstairs which most people don’t even know about. It’s a proper sun trap and is big enough for over 20 big burly boys. I went here on my 30th birthday and we all had a right good laugh in the sun – don’t forget your sun cream though – nobody wants to look like David Dickinson after a week in Tunisia when they get back to work on a Monday. 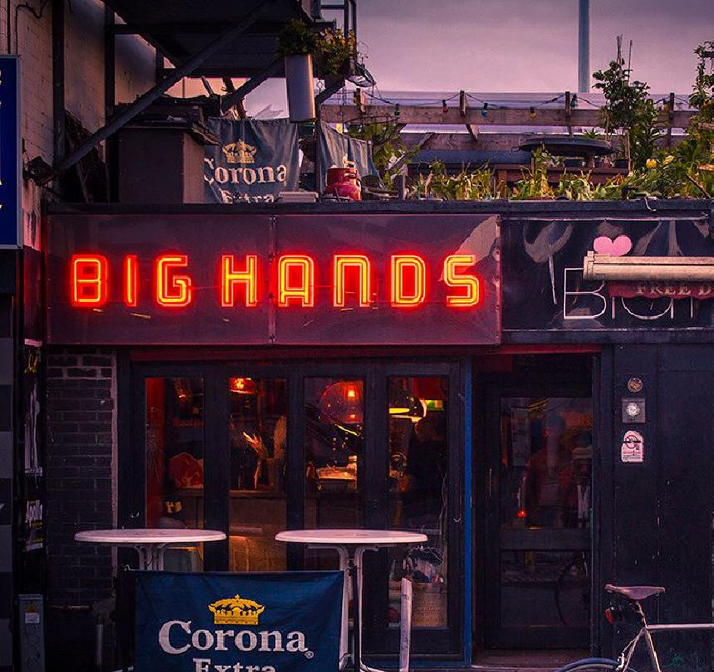 Big Hands
This legendary pre & post gig venue near the Manchester Academy has been a staple for many Mancs throughout the years; primed as the perfect place to have a fair few bevvies while listening to the great jukebox and waiting for the doors to open at 7. There’s loads of fizzy beers, tins of Red Stripe and Liam Gallagher circa. 1997 haircuts to be found as well as a cracking roof garden which provides a welcome escape from the bar downstairs. Although Oxford Road is usually rammed with buses and slow moving BMW’s, the garden provides a lovely little oasis away from it all – where you can have a chat about the latest band or the best parka to buy to go with your new gazelles. 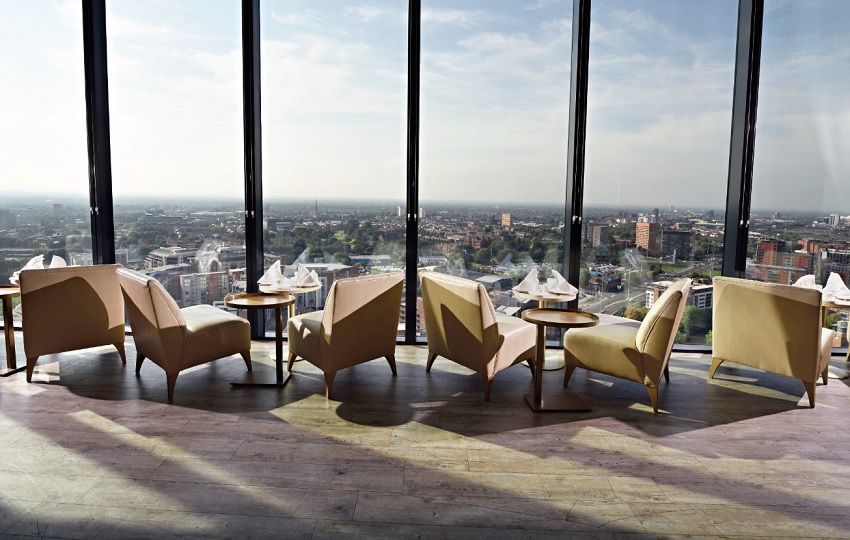 Cloud 23
Although this bar isn’t on the roof, it’s technically this highest in the city so can be included in this list without any further repercussions. You know the deal by now – it’s got amazing views of the city, a little glass floor where you can look straight down the full 23 storeys and has a huge selection of cocktails and drinks in which to sup while feeling slightly superior to the plebeians you glimpse walking on the streets below. Once again they also offer a fantastic Afternoon Tea here as well, which, coupled with the views is enough to impress anybody – regardless of how boring or ugly you are. 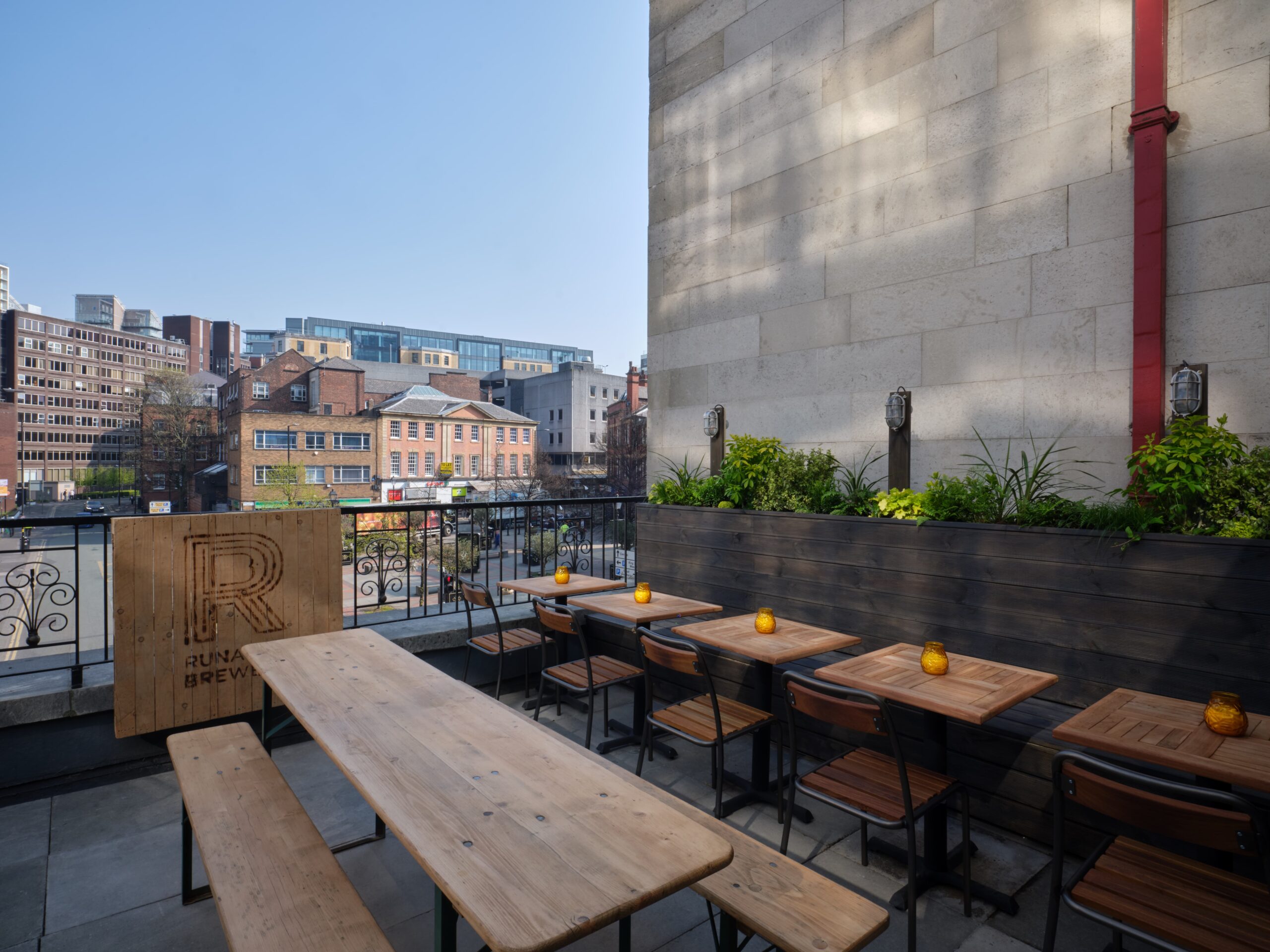 Honest Burgers
Okay so the roof isn’t actually that high here – in fact I reckon that fella who was always on the Guinness World Records TV show with Daley Thompson and Roy Castle – that dead tall one – could probably nick a chip off your plate while walking past. He’d be in for a treat though because I must say – the chips t Honest Burger are fucking fantastic. Anyway – this is still officially a rooftop bar and it’s a great one to eat and drink in regardless of its height. 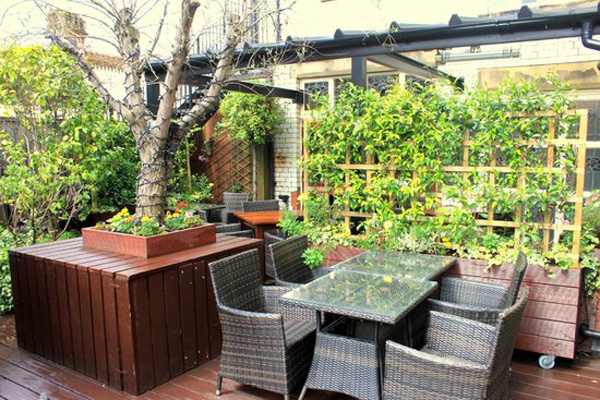 The Deansgate Tavern
As the high-born nobles drink cocktails in their elegant gowns up at Cloud 23, us riff-raff can drink pints of cider with a packet of Quavers on the roof of The Deansgate far below and have a fantastic day in the sun while enjoying the views of Deansgate and the ever looming Beetham Tower. This beer garden not only looks lovely, it’s a proper lively little space with plenty of chat and banter going on – if you don’t manage to make some random friends while sitting here then there’s something wrong with you. Or you’re Rain Man. 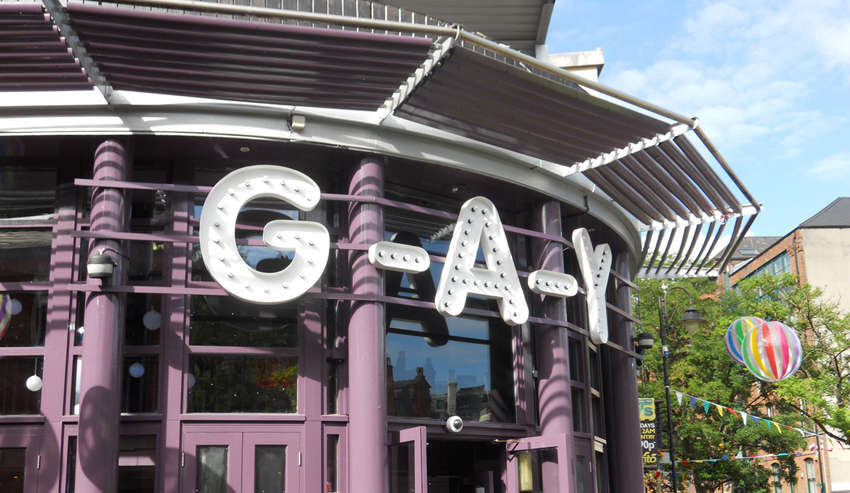 G-A-Y
Find yourself in the Village on a sunny day and you will be inundated with outdoor options. All along Canal Street you will find seating lined up where you can enjoy a blue WKD while watching the world go by. The one thing that annoys me about this though are those stupid glass and metal barriers that the council placed all along the canal wall – it used to look so much better before they ruined it with health and safety. Therefore I suggest G-A-Y and their fantastic roof terrace. Conveniently located right opposite a brand-new set of offices or flats, the view has suffered massively – but it’s still great when the sun is shining – and to watch people walk past down Canal Street below.

Spotlight on Statues: The Forgotten Eco-Activist who founded the RSPB