The slowly deteriorating Greengate Baths have seemingly been forgotten for decades...

Everybody knows all about Victoria Baths down in Victoria Park, mainly because the BBC made a programme back in 2003 and it won, receiving £3.4 million from the Heritage Lottery Fund and pretty much capturing the attention of everyone in the country.

There’s another swimming pool though that most people don’t know about, and it’s much closer to the city centre. Still standing (but covered in scaffolding at the moment) – lets have a gander at the story behind Greengate Baths… 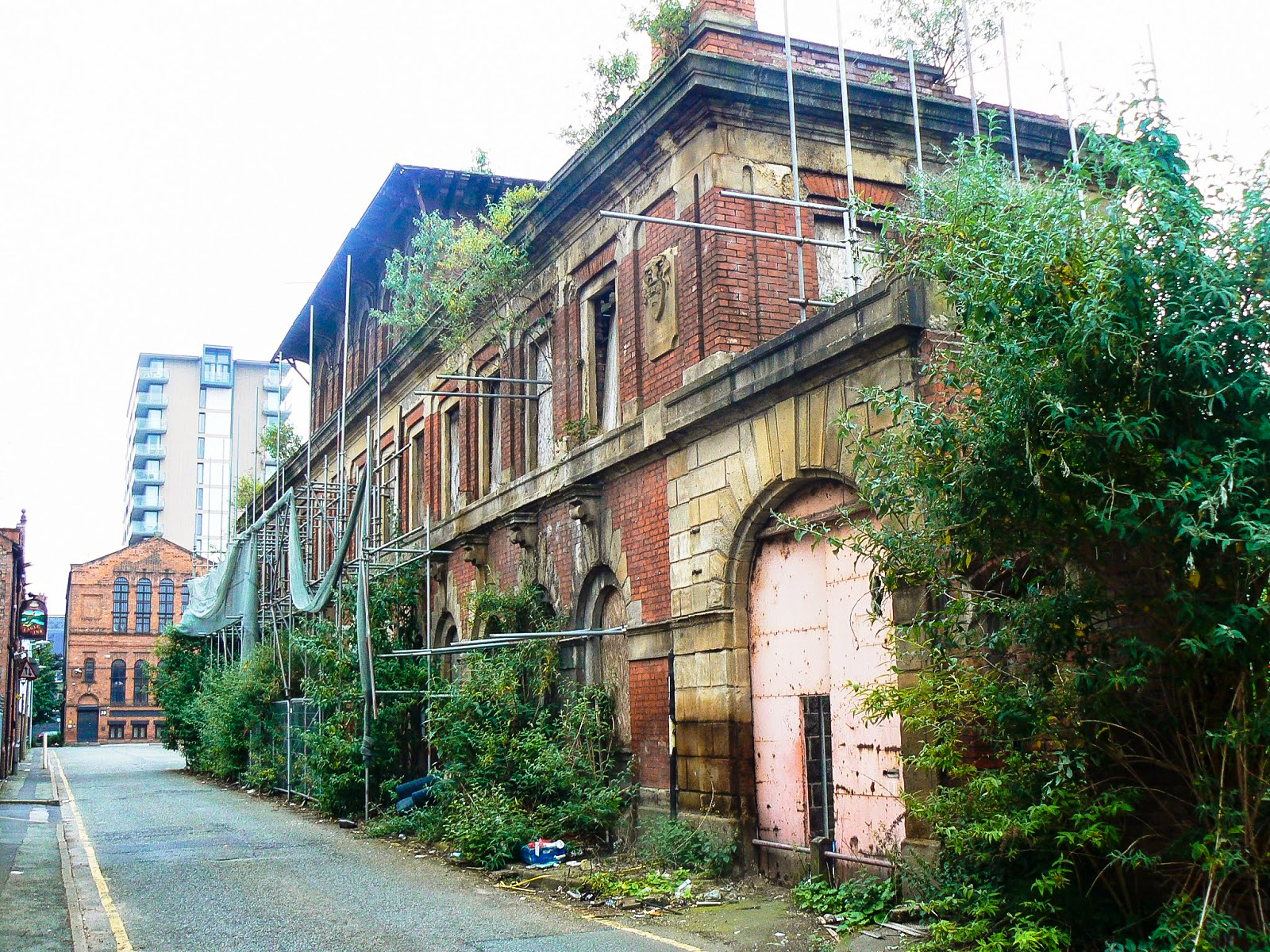 A rare surviving example of purpose-built public baths, Greengate was built all the way back in 1855 by one of Manchester’s greatest Victorian architects – Thomas Worthington.

Born in Salford, Worthington left school at 14 and quickly rose up the architectural ranks, and after a prolonged tour of France, Italy and Switzerland with his mate, he came back to the city with a first-hand knowledge and love of Italian Gothic and Renaissance architecture.

He’s credited with a long list of architectural gems in the city, including The Memorial Hall in Albert Square (now Albert Square Chop House) and the Minshull Street Crown Courts, as well as buildings further afield, such as the glorious Royal Infirmary in Halifax and Manchester College at Oxford. 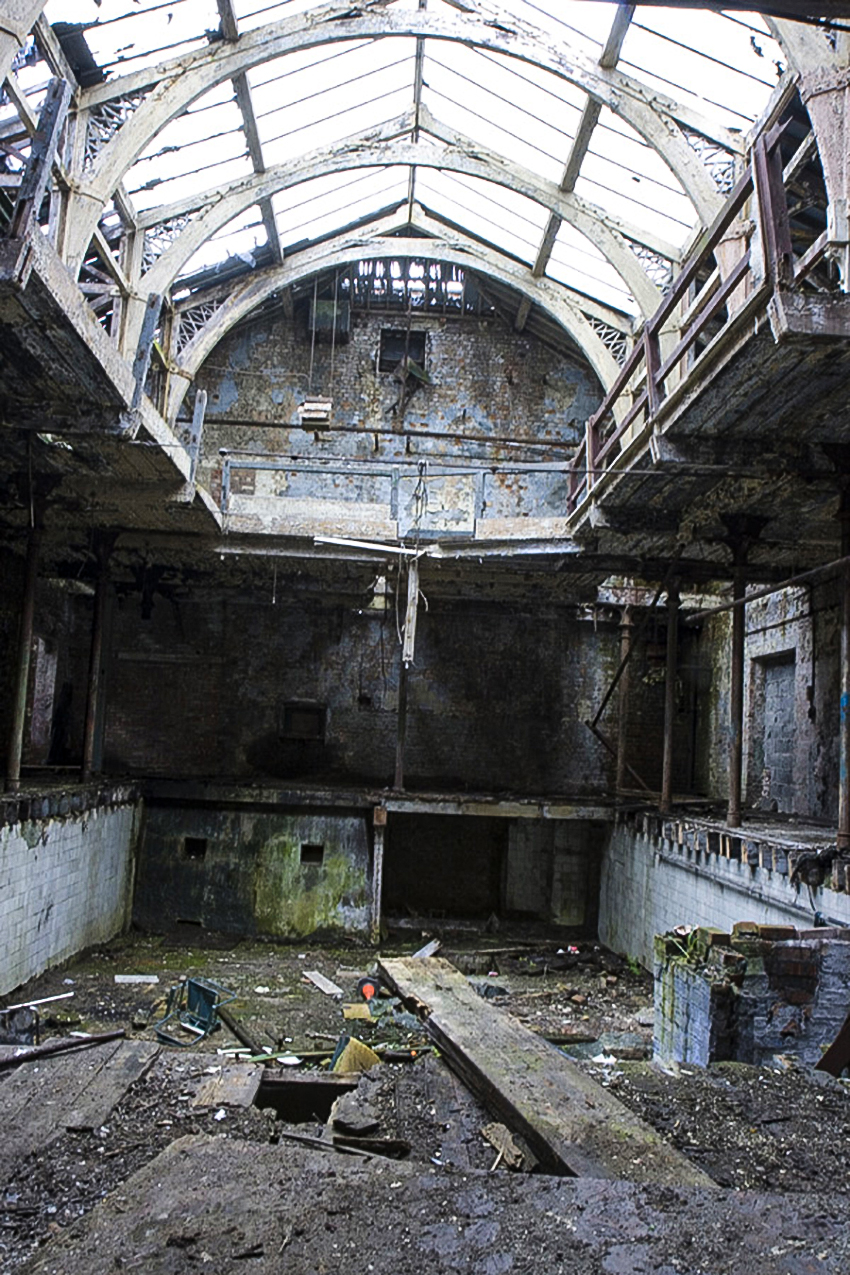 Worthington was also the man behind the recently uncovered Mayfield Baths that were dug up only a few weeks ago after being bombed to smithereens in the Second World War, and of course – Greengate Baths.

The current state of the baths is rather alarming, with scaffolding and some serious shrubbery hiding a stunning Italianate brick building, that became Grade II listed back in 1980 but has seemingly been left to rot ever since then. 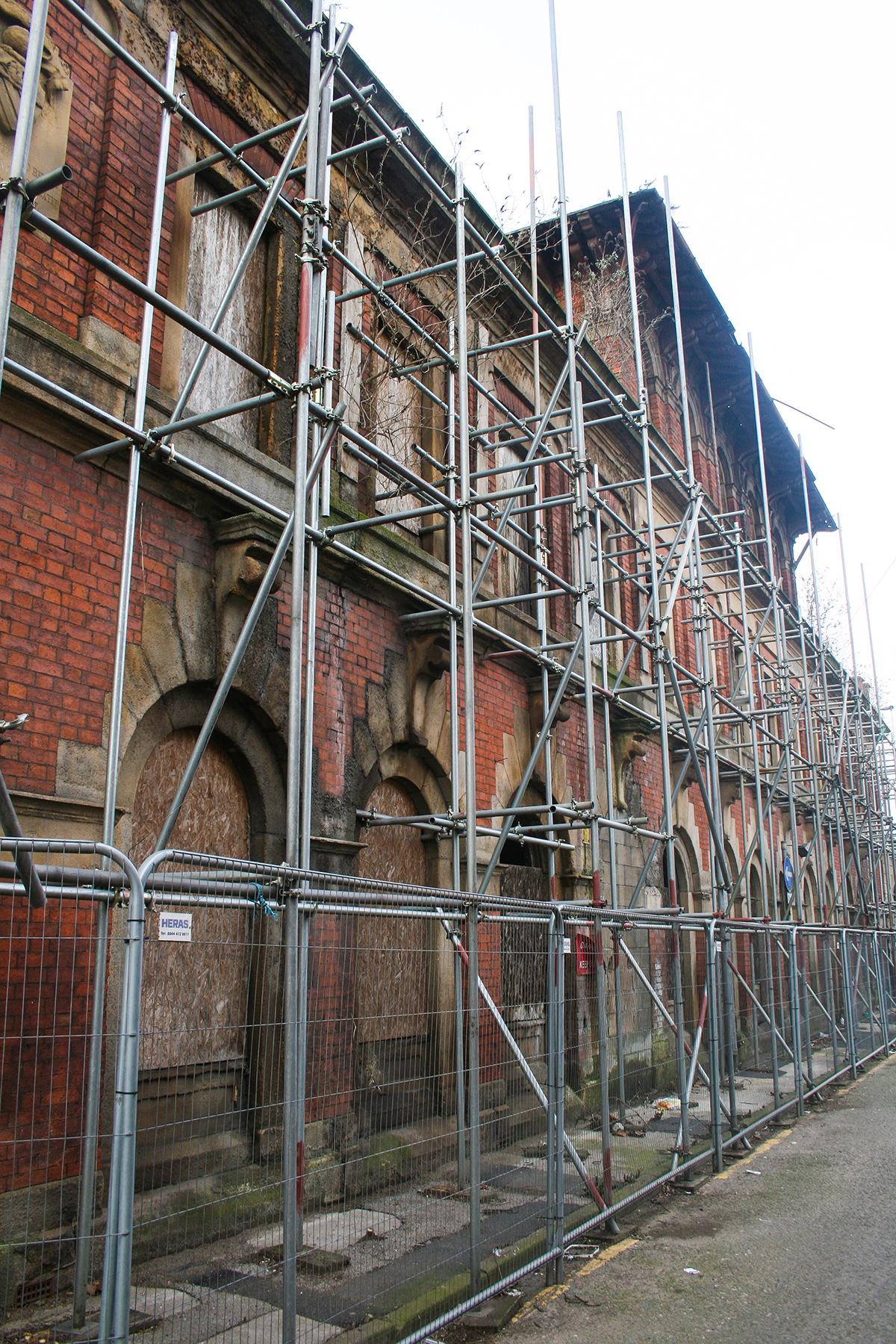 Upon opening, the baths were very popular indeed. In the first five months it was used by 16,000 people, making its shareholders very happy. One, an engineer, declared that Greengate should be an example replicated across the kingdom, and was superior to any of the baths that he had visited in London.

Considered one of the finest pools in the country when it first opened, the pool’s claim to fame is that Mark Addy learned to swim there when he was a young lad.

In case you don’t know, Mark Addy isn’t just the name of a pub on the river, he was in fact a local fella who impressively saved more than 50 people who fell into the manky River Irwell – saving their lives and becoming a hero. 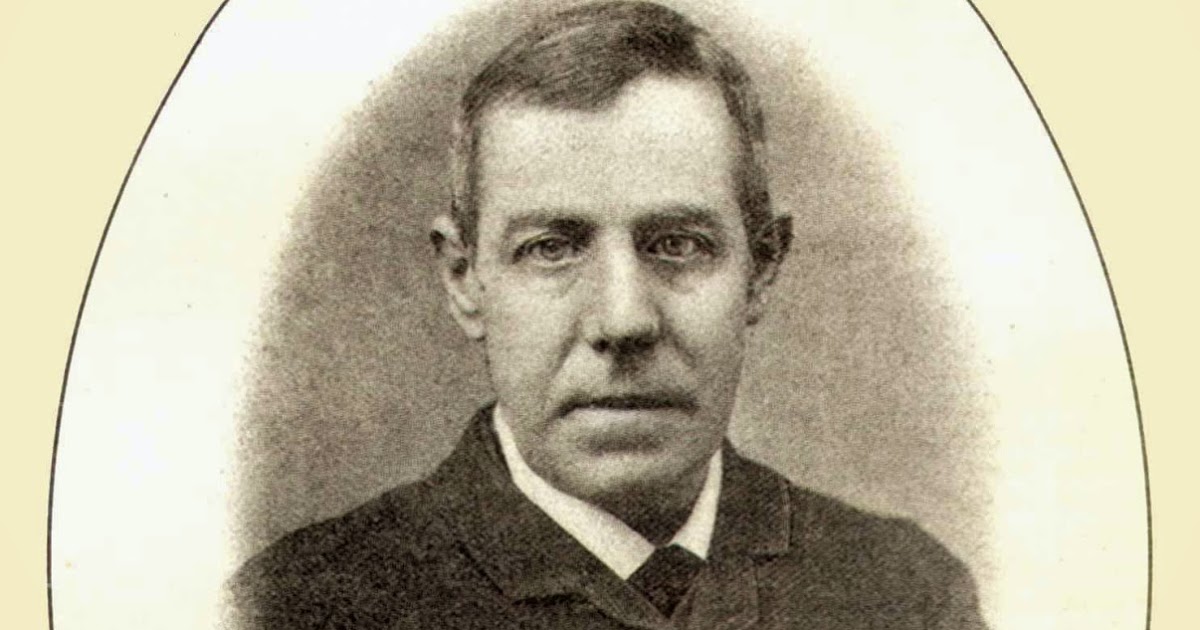 In 1878 he was presented with a loyal address of appreciation by the Mayor of Salford and awarded 200 guineas (about 20 grand today) and even received a letter from the Prime Minister and the Albert Medal of the First Class from Queen Victoria.

By looking at this set of incidents through an ‘It’s A Wonderful Life’ prism, if it wasn’t for Greengate Baths – Mark Addy probably would never have learned how to swim, and thus those 50 people would most likely have died. The cultural and historical significance of the building therefore cannot be understated.

Hoping to save and get some much-needed love into the Baths is the city’s Victorian Society, who have been mounting pressure on Salford City Council to take action to save the building. 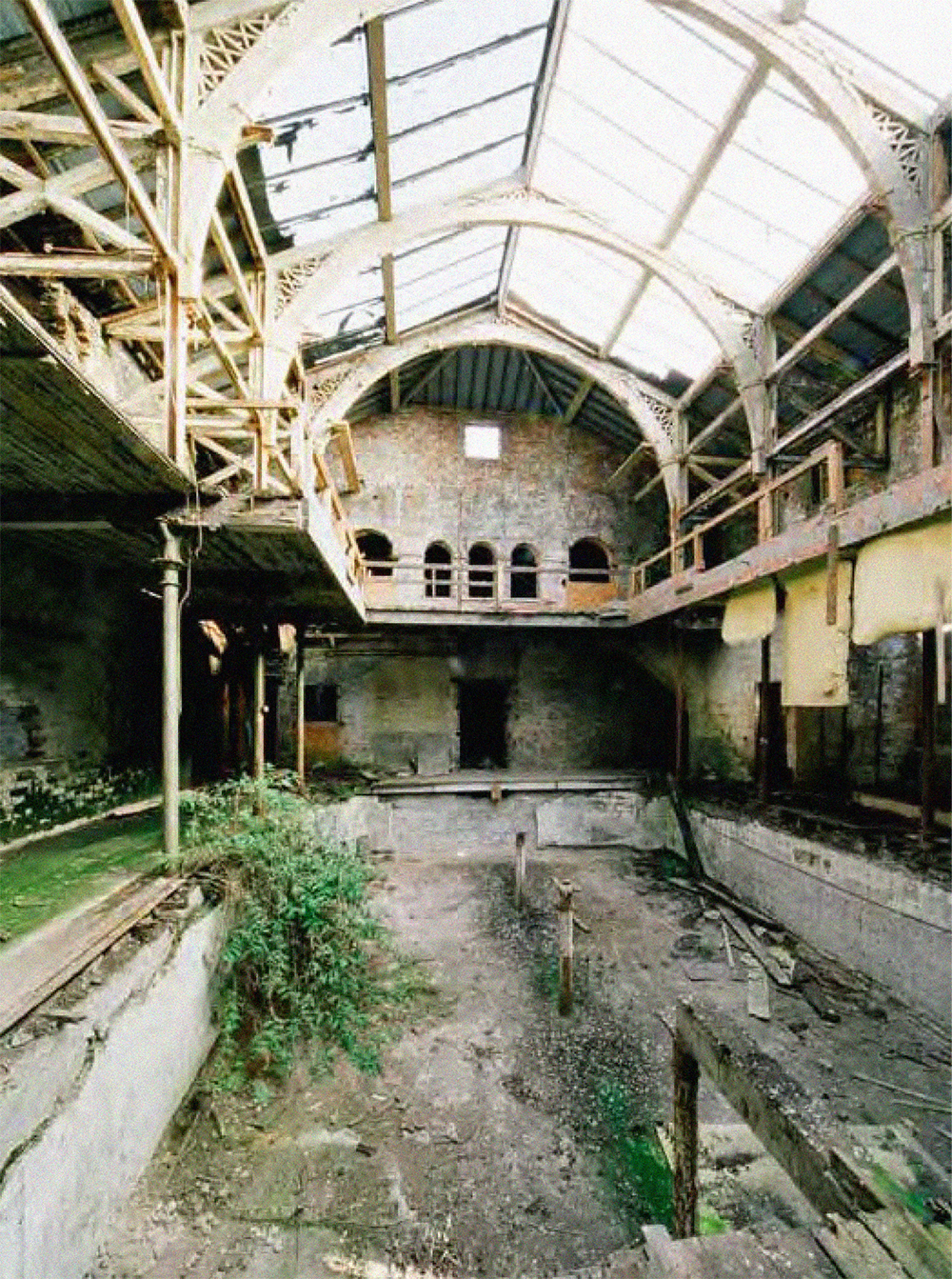 As is the case with most areas in and around the city centre, this particular area has seen considerable interest from developers in recent years and in fact is earmarked for a trio of huge apartment towers.

Building of the towers though is subject to the condition that the development company restore Greengate Baths, as well as explain how they will create a new public park in the area.

AQ Investments and Renaker have submitted plans for a new park, located on the site of an old church where more than 17,000 people were buried. 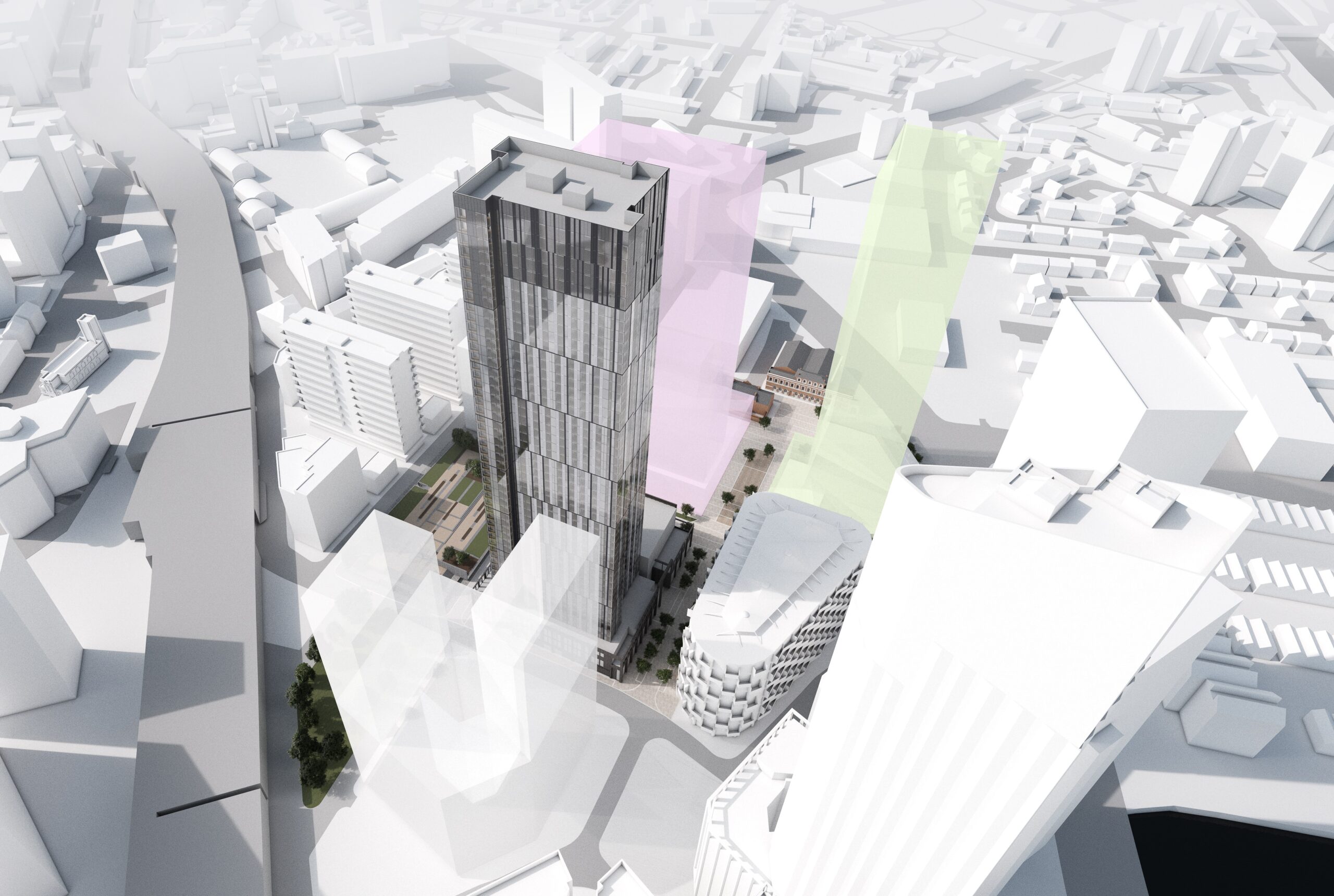 The new plans for Greengate

Plans for Greengate Baths though have yet to be decided, with The Victorian Society keen to stress that although it would be impossible for it to become a pool ever again, that they will encourage a new use without destroying any of the building’s unique features.

I guess all we can do now is wait and see what the developers come up with, and indeed if there are any takers for setting up shop in one of the city’s truly forgotten Victorian gems.