30 Years of Storytelling: The sights and smells of regeneration Manchester

When Len Grant gave me a copy of his latest book, nostalgia kicked in not because of the content, but because it smelled. 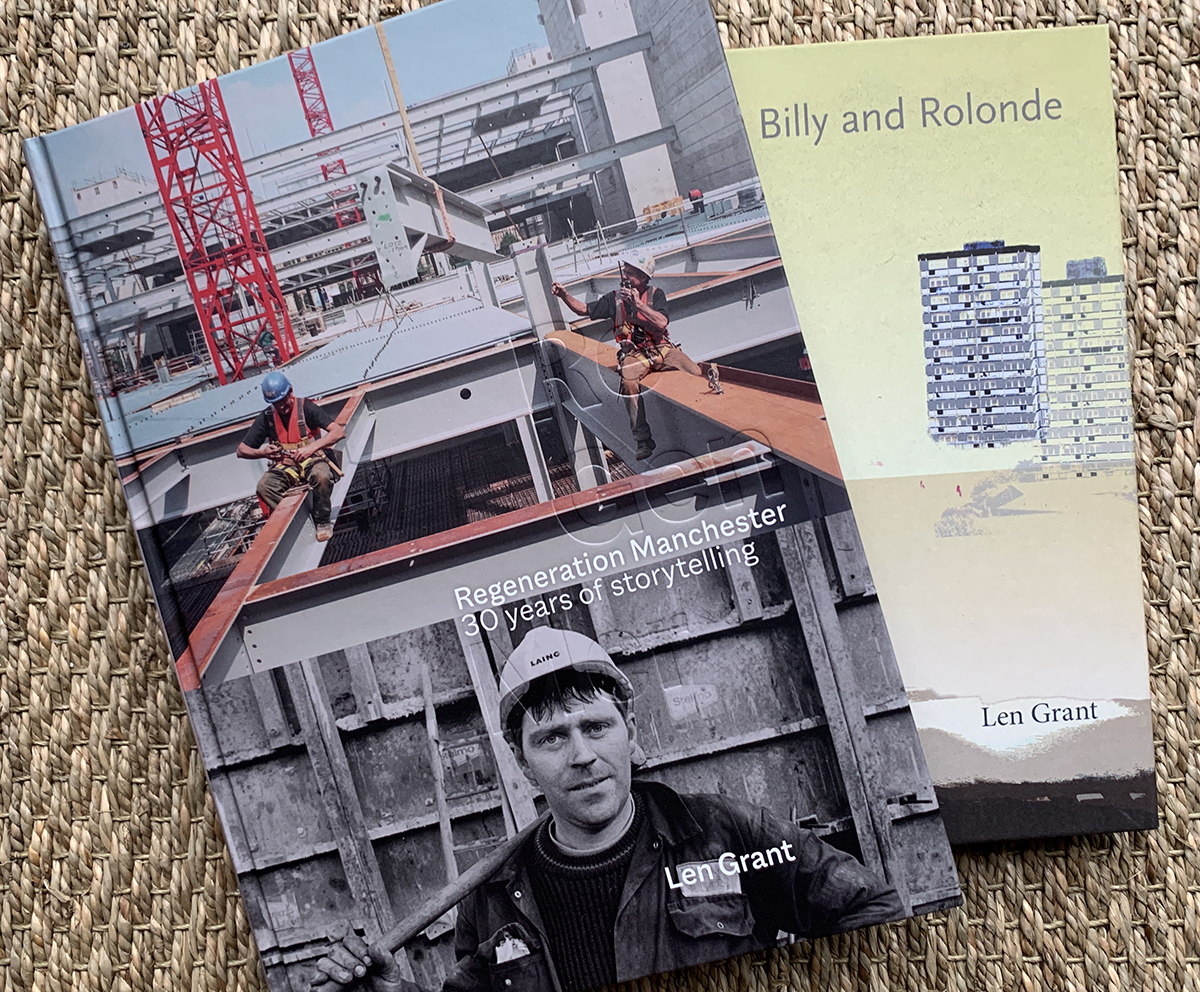 Now that might seem a strange opening line, but Len mentioned it before I commented. “It’s the old-fashioned smell of ink ingrained into paper. Screens don’t give you that.”

The book smells – and looks – like a labour of love…which it clearly is. Although, Len told me, “I’m not a big fan of looking back. So many people do that, relying on old images and words.” So what brought Len to producing this luxurious book charting our City over three decades and three decades of his infatuation? Quite simply Lockdown. The dreaded word.

Len last featured on Manchester’s Finest in January this year, with his Mayfield Stories book. In that publication sketching rather than photographing. It was the latest in around 25 books which he has published (not to mention exhibitions staged). 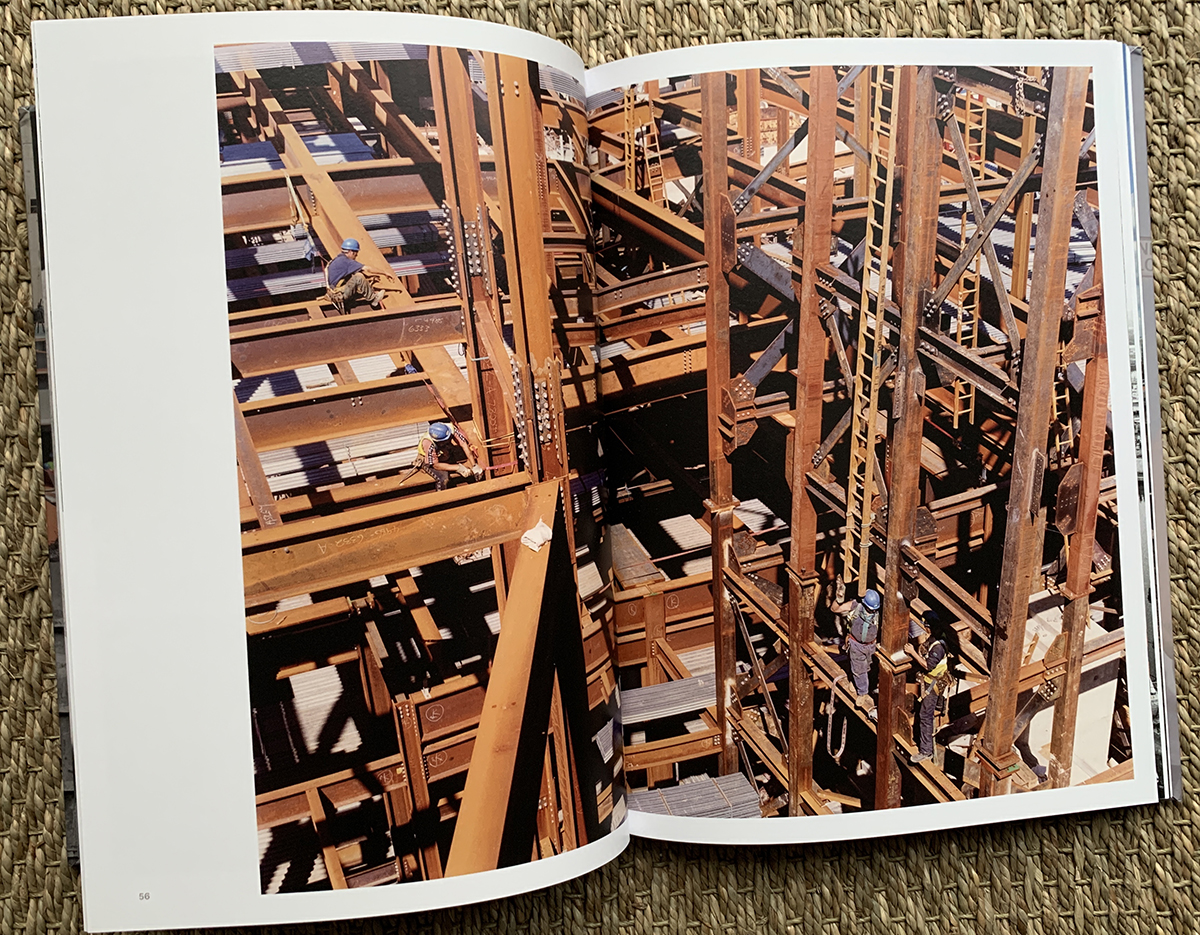 Not a bad tally when you divide 25 into 30 years. I have a Len Grant bookshelf. ‘Regeneration Manchester, 30 years of storytelling,’ is a large format, 178 page book documenting that regeneration.

“I’d been mulling it over for a long time, but like everybody else, when worked dried up at the end of March, I found time on my hands.” A very pragmatic use of spare time and an achievement, for such an impressive volume, in very few months from start to finish. 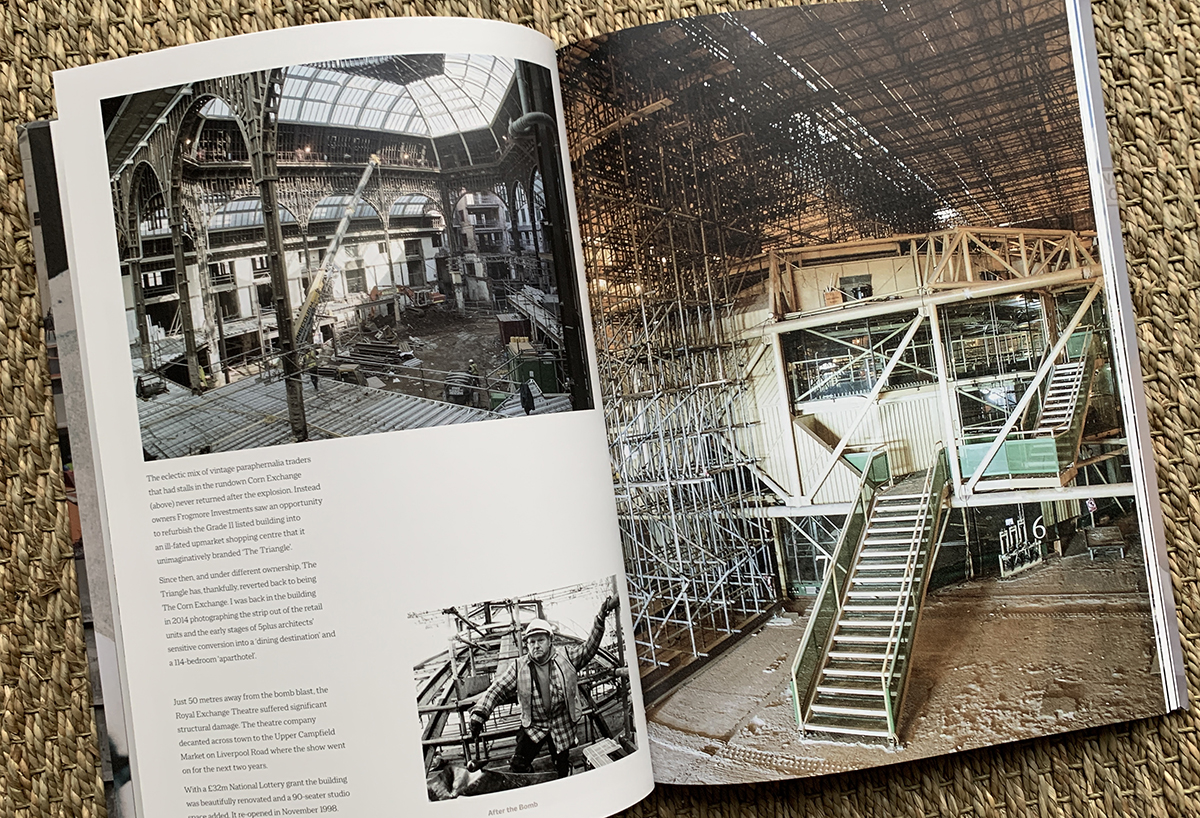 But let’s step back again (in my own world) to the years following the Millennium. I was commissioned by the City of Manchester to produce an international business magazine promoting rebirth and growth.

When I say the City of Manchester I mean the whole entity, the City’s ten boroughs. It was, therefore, called TEN. It made me smile to see, on the contents page of Len’s new book, a shot of Jan Chlebik (also previously featured on Manchester’s Finest) photographing Len for TEN magazine. Full circle somehow. 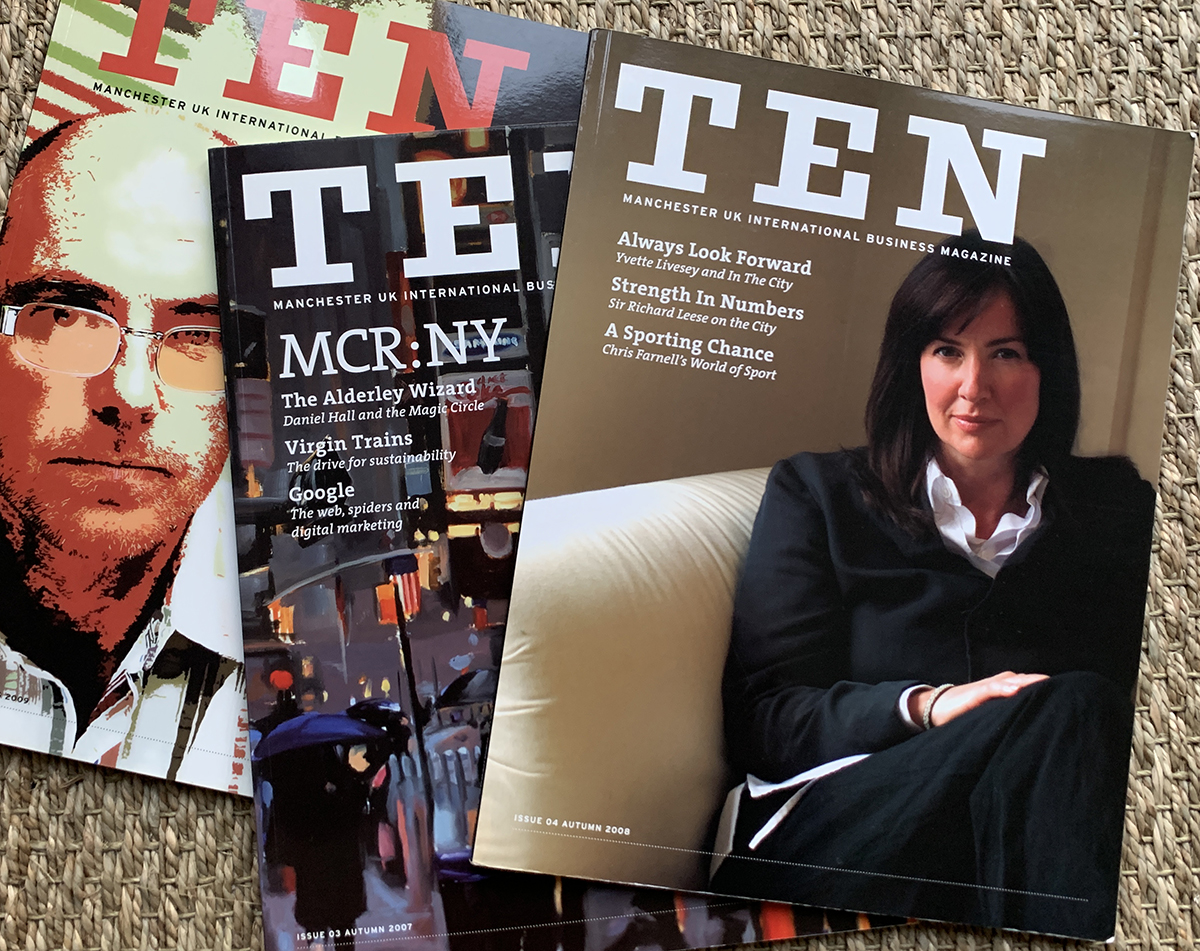 I was given free reign on the magazine, both editorially and design wise, to feature people whom I had worked with during the explosive years of the 90s and on. Len had always been around recording what was happening and so photographing a photographer at work was a good story. Of course Len, arch recorder, couldn’t resist photographing Jan photographing him. He never stops…thankfully.

Coming to photography relatively late in his career (a salesman until 30) Len changed direction at exactly the right time. In his introduction to the book he describes our City back in the 80s. “There wasn’t much to do in Manchester back then. If I had mates up for the weekend we’d have a day out in Liverpool. A late meal in town involved the 42 bus over to Rusholme. Sometimes I’d go to Affleck’s Palace on a Saturday, because on Sunday everything was closed.” How times – and places – have changed. 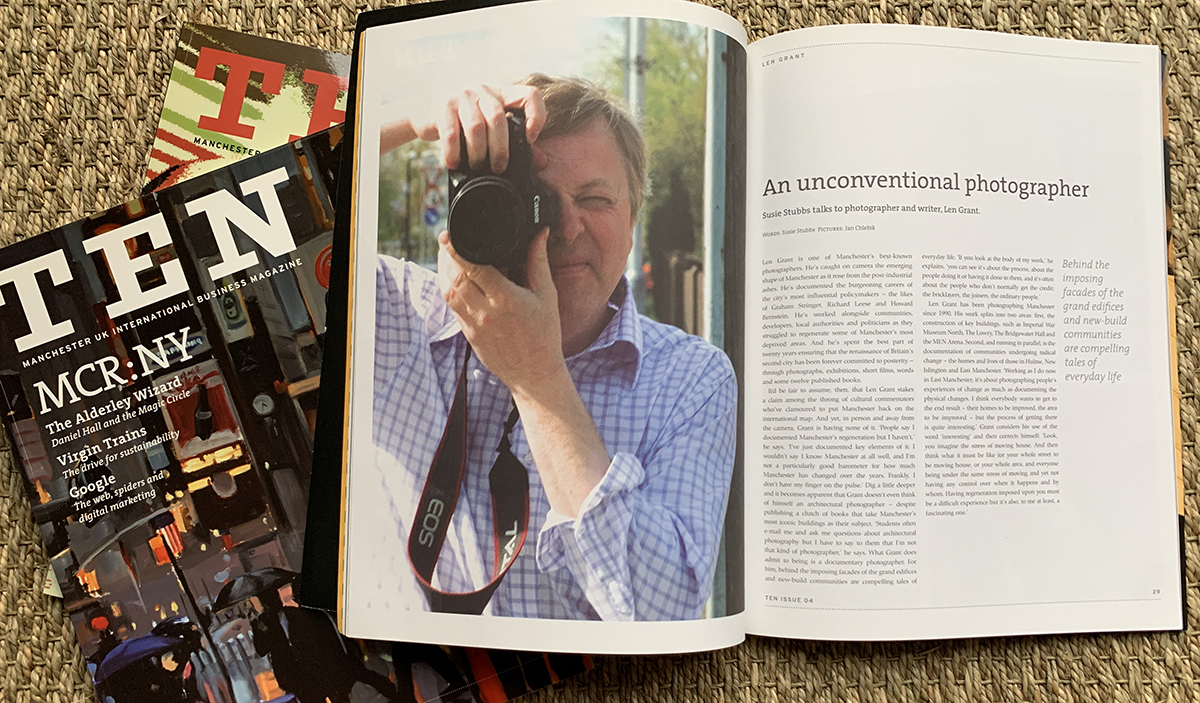 For me of that generation looking through each page of the 178 pages brings back memories. The people that Len photographed were the people that I worked with on many, many projects, from the Olympic Bid to the Commonwealth Games, from Tony Wilson to Sir Howard Bernstein. I’m glad that Len has used these past months to put all the pictures and stories into one impressive volume.

I know that the current generation know that our City wasn’t always as it is today. I’m not sure that they know how dire much of it was and how much of it was transformed by people, buildings and places.

A frenzy of clearance, building, re-building. Of music and football. Of the interruption and destruction caused by an IRA bomb and how that destruction quite simply catalysed what was already happening. This book captures it all. 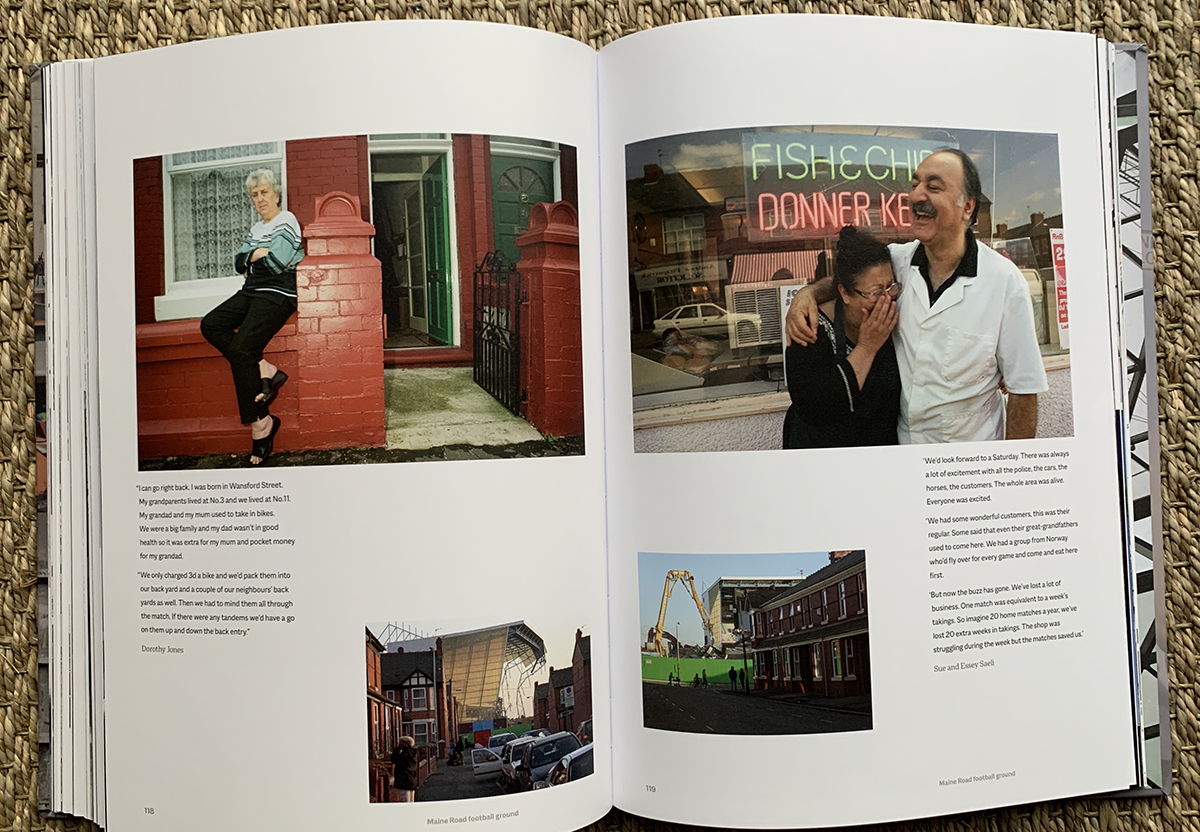 Len’s book costs £25. So it’s not cheap. But it is very, very good value for anyone who lives and breathes what our City is today.

It isn’t just the ‘looking back’ that Len isn’t quite in accord with. It’s a documenting of the people and places that formed the foundations of today and a demonstration of what can be achieved in such a relatively short time. An optimist’s view of what can continue to the next stage now that foundations are laid.

Len’s book smells good. Maybe that’s an analogy for the Manchester of today.