A Look Inside: Saul Hay Gallery's First All Sculpture Show

It was good to step inside the Saul Hay Gallery at Castlefield for the first time in recent months – for obvious reasons. 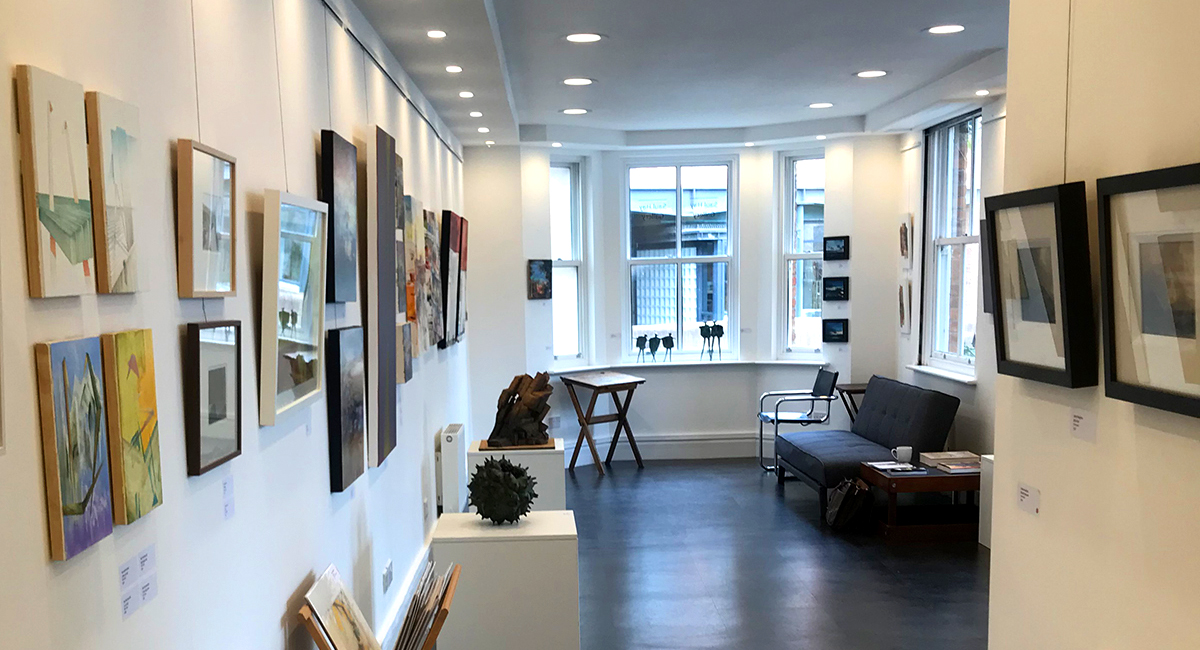 Even better was that Ian Hay had invited me along for a preview of the gallery’s new show on a one to one time slot. Crowded exhibition previews are (for the time being at least) a thing of the past. Excellent. Just me and the work, plus Ian of course to take me through the questions I had.

The gallery’s re-emergence event is their first all sculpture show. I’ve used the word eclectic before to describe their shows.

Always a mixture of 2D, 3D and sometimes somewhere in between. This show is exclusively 3D, with twelve sculptors contributing around fifty pieces in total. Several of the contributors make work that is to be viewed outside as public art; this show – with the exception of two pieces on plinths in the gallery garden – consists of pieces that sit within the white gallery space. 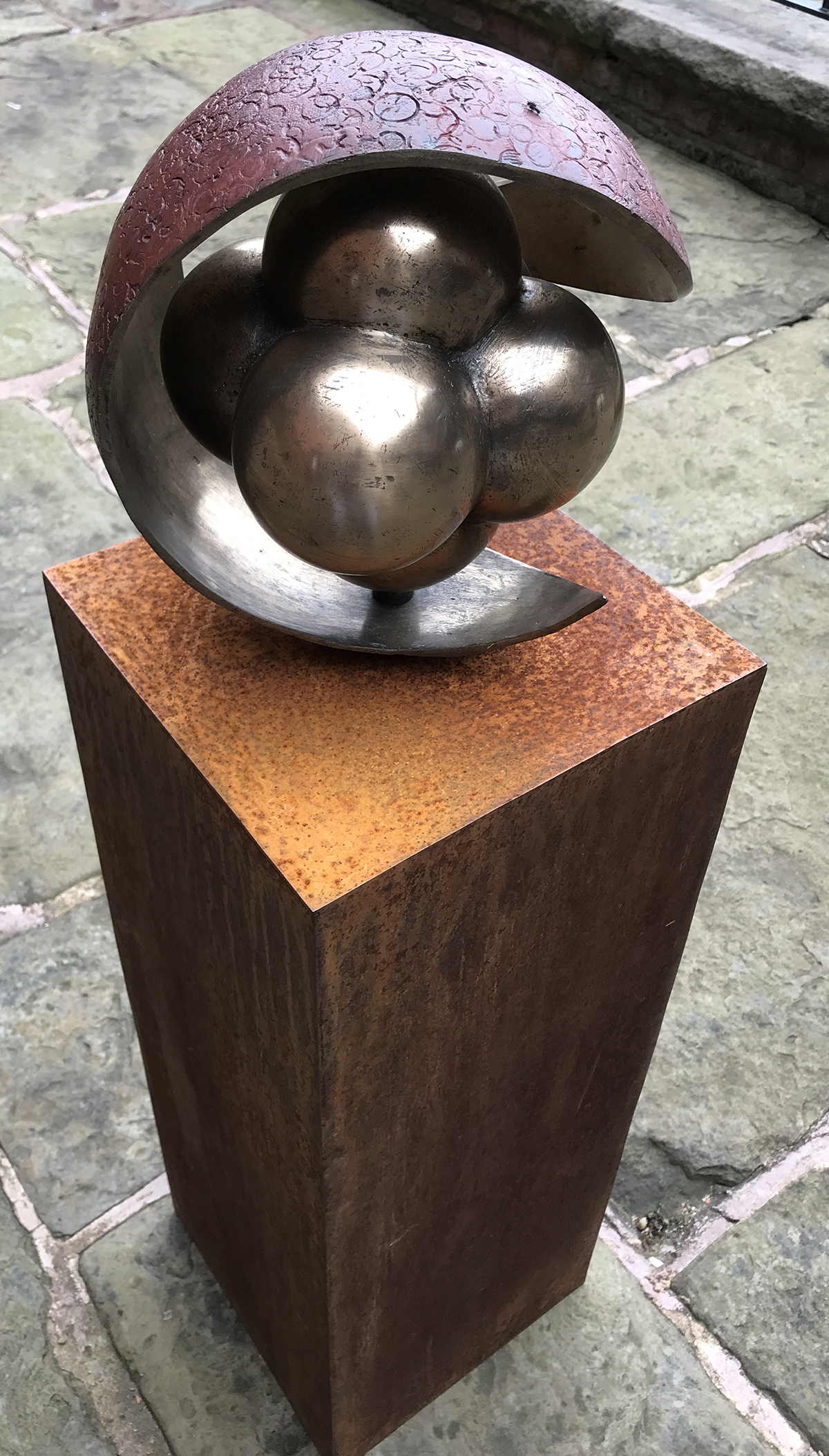 Twelve artists and fifty pieces of work can’t be covered in the relatively small number of words that I have to work with. And so, I guess, I’ll have to pick out one, two or three that intrigue me in different ways. Let’s go first with one of the simplest and then go straight to one of the physically most complex.

Tony Heaton is a disabled artist who uses some of his work for social comment. In 2018/19 his Gold Lamé car sculpture was hoisted onto a plinth outside Liverpool Parish Church. Tony took the shell of an ‘Invacar,’ of the kind that he was issued with in 1971. 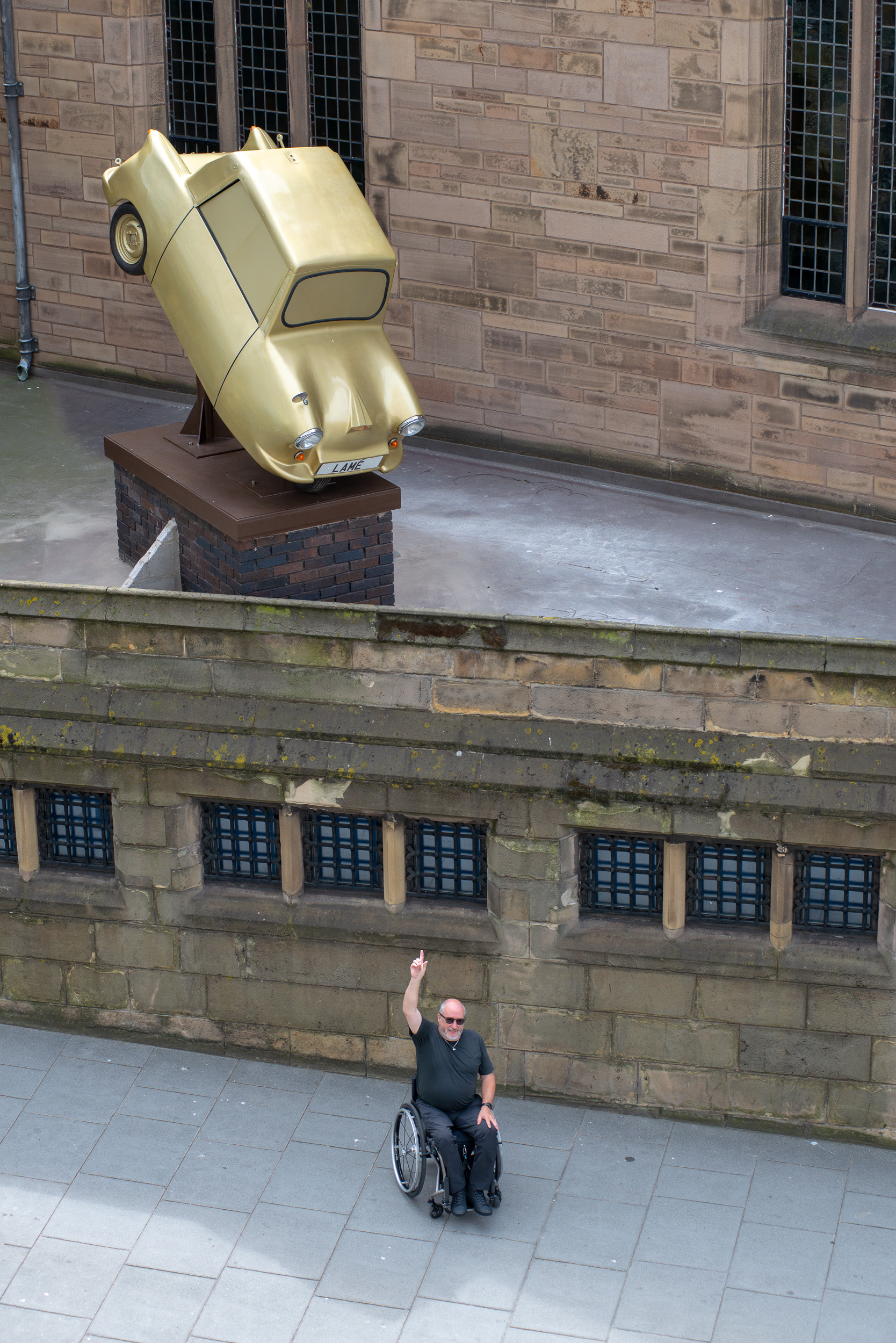 An invalid car, he says, ‘That was three wheeled, with space for a folding wheelchair…but just one seat. Under the assumption that the disabled had no friends, family or lovers.’

The car was issued in NHS blue – which became known as Spazz Blue. He found an original fibreglass shell, painted it gold and changed Lame to Lamé. 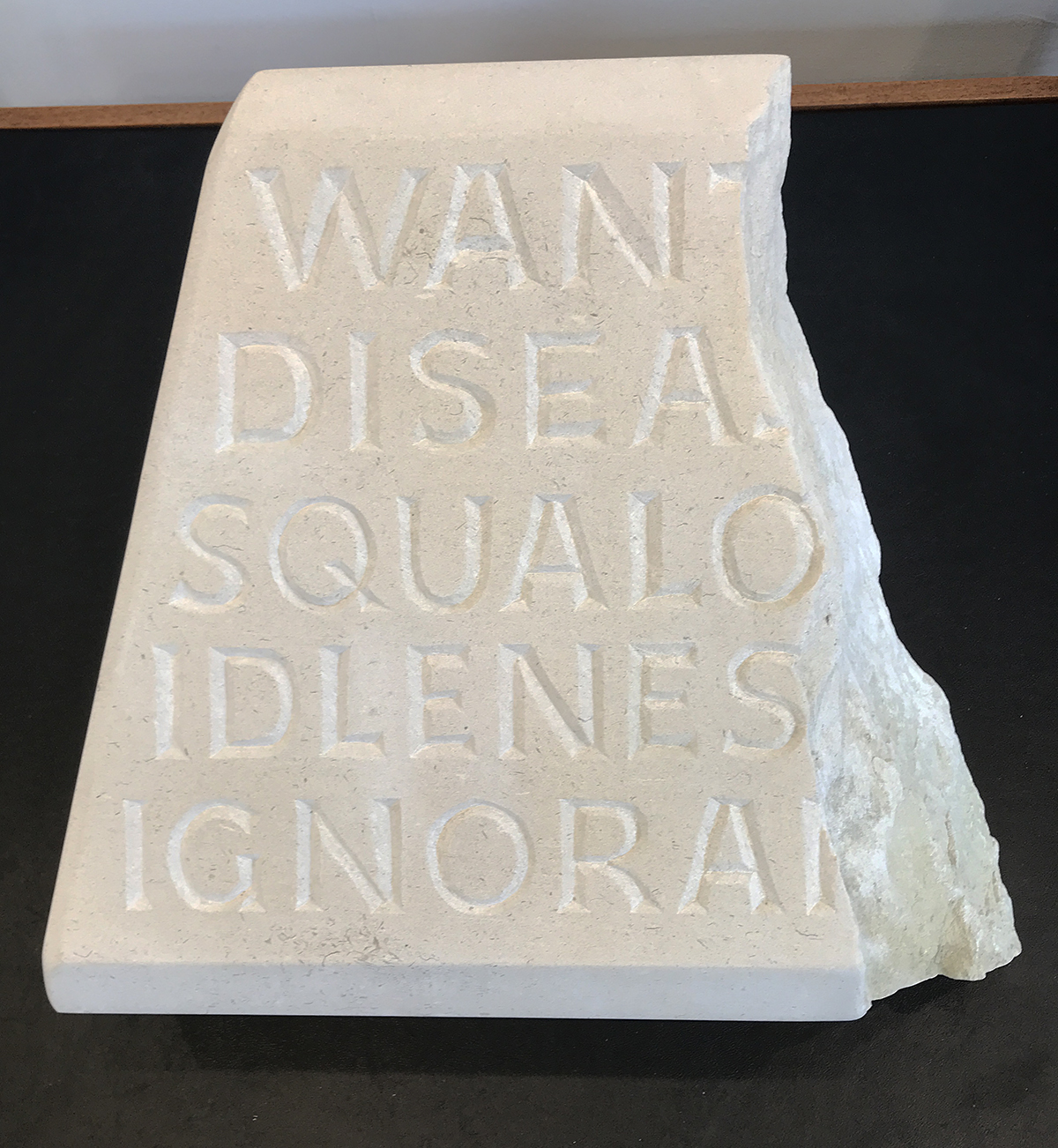 A piece, as I’ve said, too big for inclusion in this show. But what is included is a stone with the words ‘WANT, DISEASE, SQUALOR, IDLENESS, IGNORANCE’ carved into it. Those words? From William Beveridge in 1942 and which gave rise to the welfare state by identifying five problems which prevented people bettering themselves. The stone, of course, is broken. A simple and poignant message.

So let’s move on to complex. Mark Gibbs’ myriad sculpture refers to a little known First World War Africa campaign, commenting on the dangers of Imperialism. Another political statement. 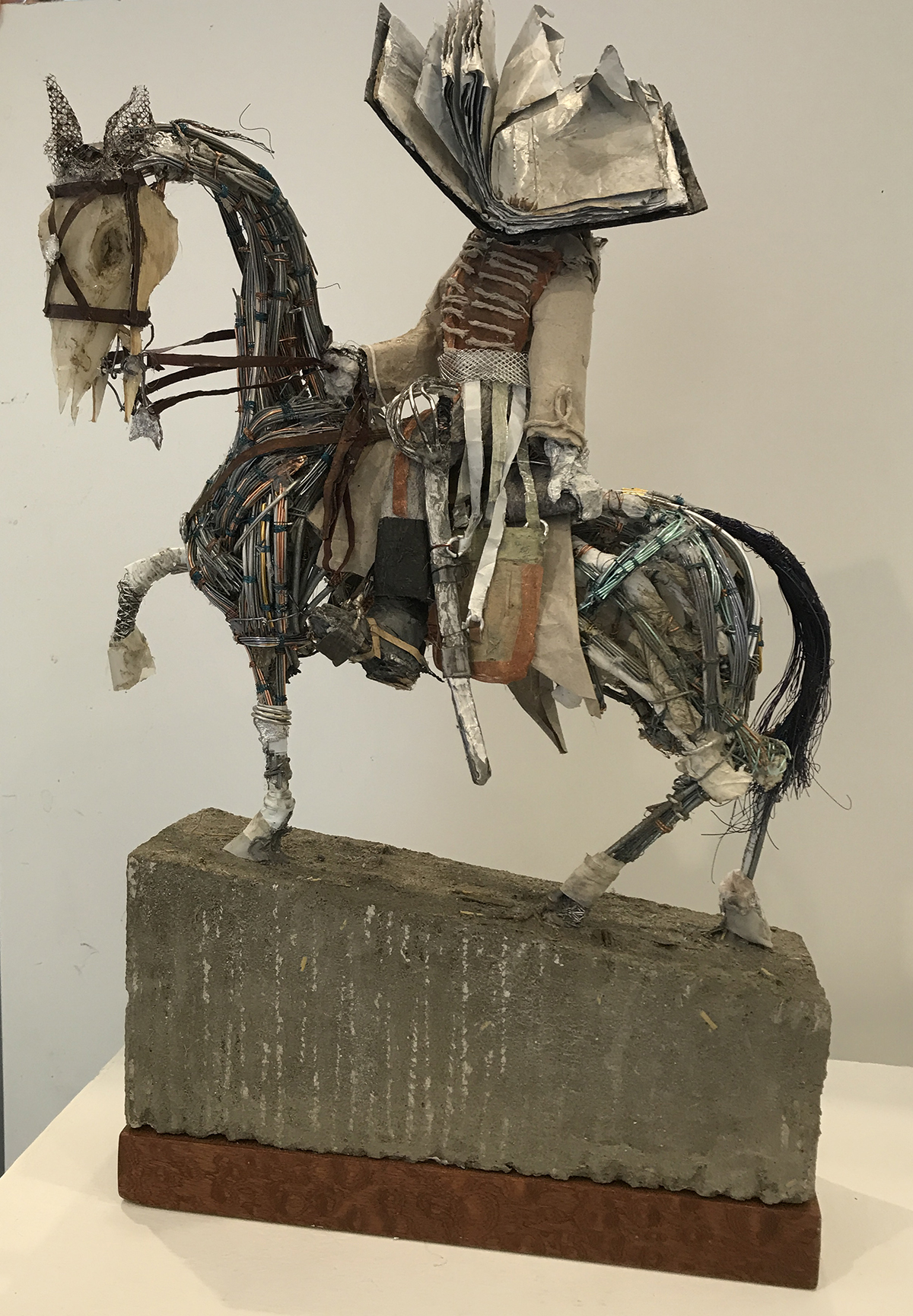 The horse – atopped by an open book head – is built from inside out, with tendons and sinews of wire. Almost a puppeteers vision. I had seen pictures of this piece of work, but was astonished by the relatively small size and the intricacy of textures and materials woven into the whole. A must see from very close up.

Each piece on show is worth some time looking at and pondering. Halima Cassell – whose Manchester Art Gallery exhibition was featured on Manchester’s Finest – has contributed several works, which are always of the highest quality with mathematical structures. 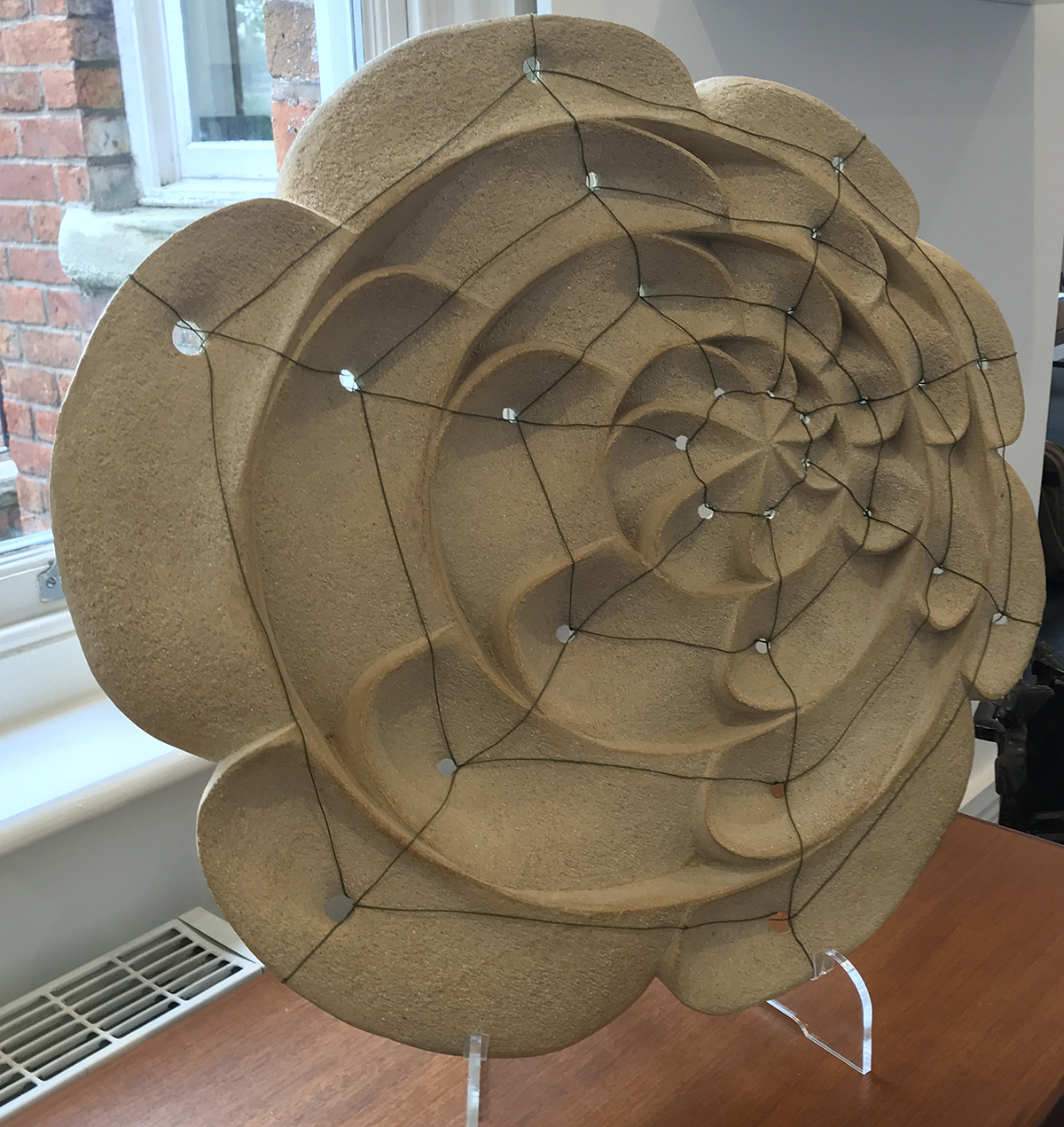 But for sheer ceramic nerve take a look at Adele Howitt’s porcelain piece… We all remember rolling clay into indeterminate shapes and waiting to see if it had cracked or fallen apart in the school kiln. Well imagine waiting for the kiln doors to open if something as complex and beautiful as this had been fired at huge temperatures. 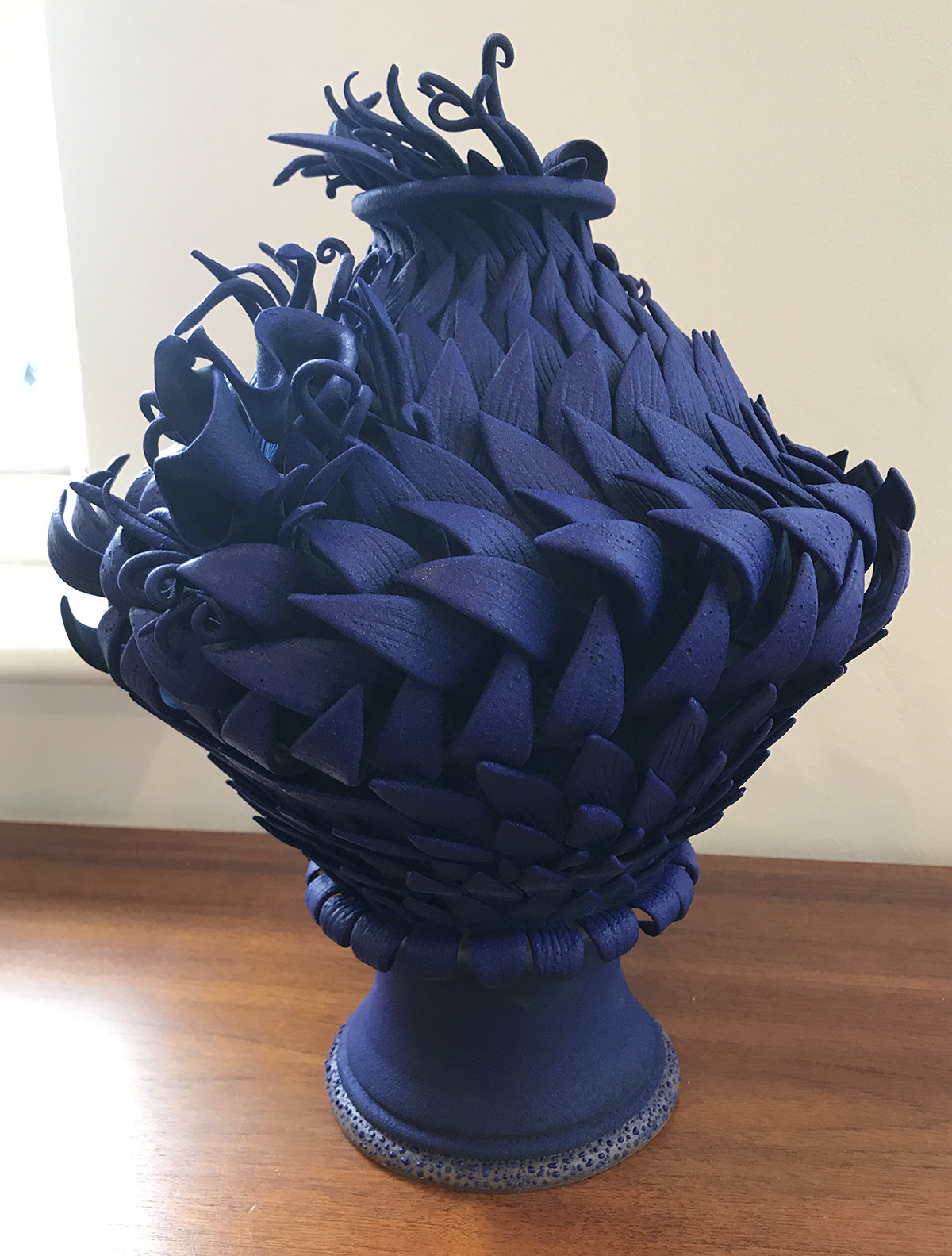 Let’s finish – if only to stop me writing in detail about many more of the works on show – with a piece by local legend (he won’t like me calling him that) Liam Hopkins.

Again worth looking back on the Manchester’s Finest piece about him last year. I smiled as Ian Hay told me the story. Although I’m maybe ‘paraphrasing’ a little. Liam told me when I last saw him that his works were getting bigger and bigger. 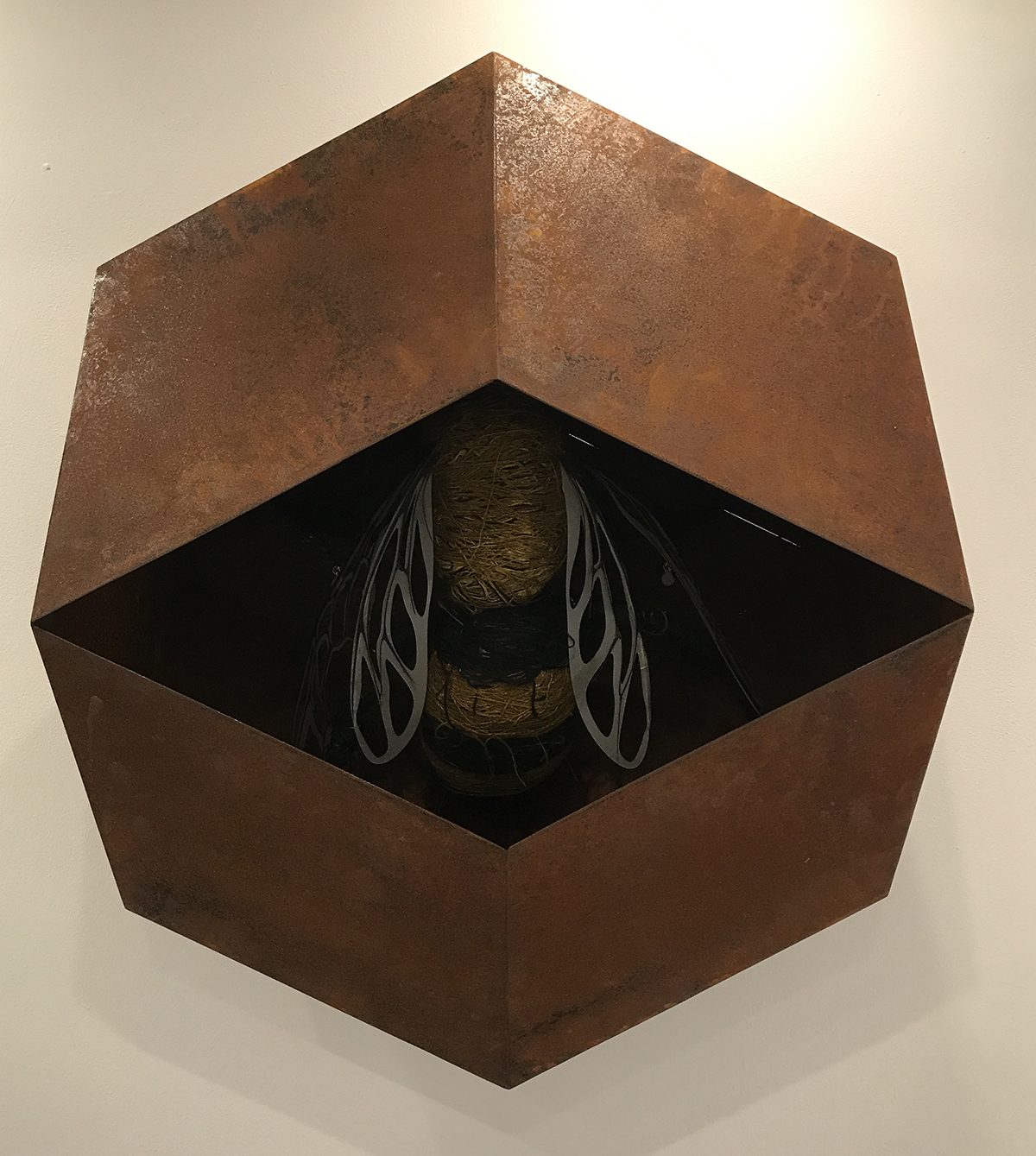 This time he was invited to do a gallery piece and it was suggested that he do a bee. I can imagine his face…Liam doesn’t do what, it has to be said, has become a somewhat overdone cliché. So…

This bee is a dying bee and, so I’m told, as they begin to die, the wings of a bee start to become transparent and ‘dissolve.’ Liam’s bee is hiding, fading away. But look closely and the body is made of wrapped cotton thread. Cotton thread which Liam rescued from the last production mill in Mossley when it closed many years ago. 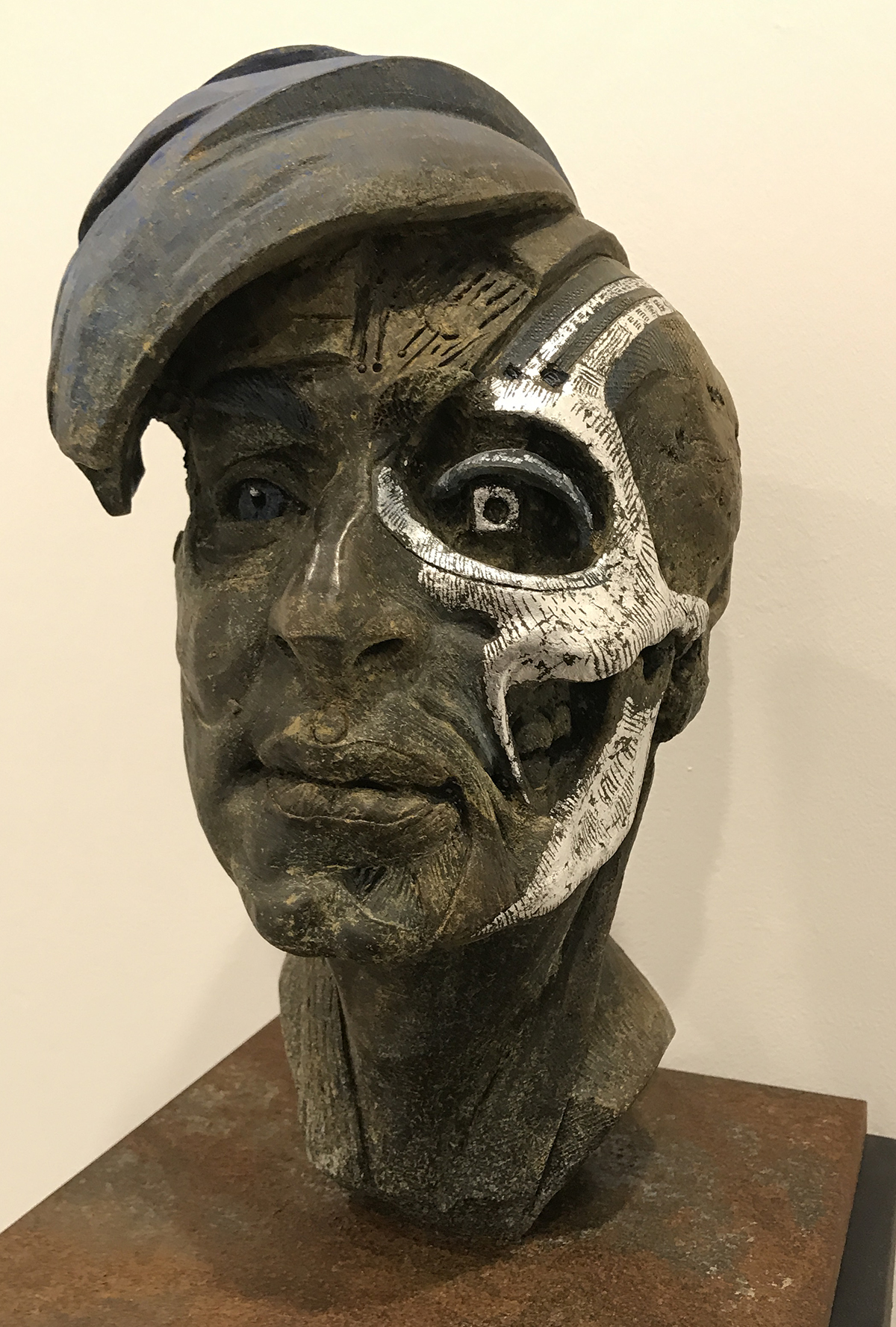 Some really hard hitting messages in the handful of pieces written about. But all of the sculptures have their own beauty and merits. And of course it costs nothing to visit the Saul Hay Gallery to see this exhibition, which runs from the 5th to the 20th of September.

Could we see a ‘Seat Out to Help Out’ scheme to get live events and theatre back on track?