…and I certainly did too when I first saw it all the way back in 2003 on my first Ralph Bullock bus into Fallowfield. It was only 50p a ride back then too! 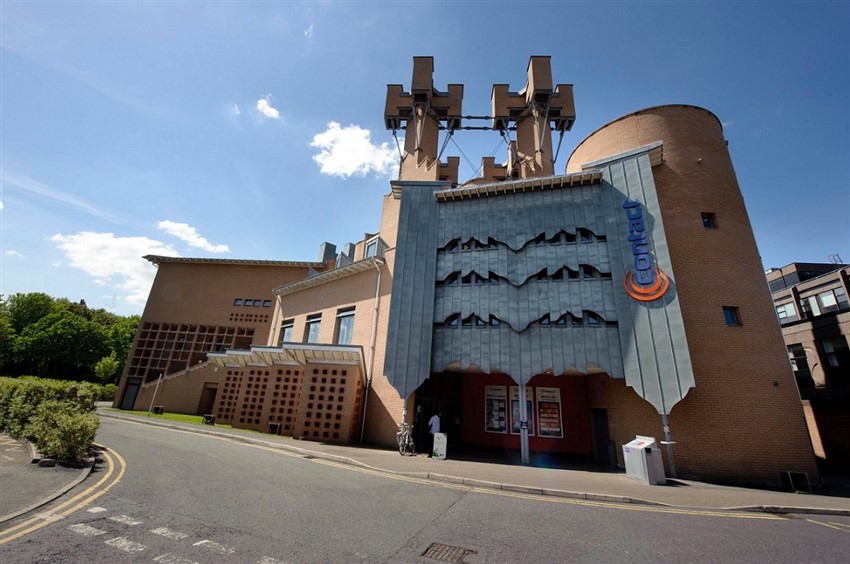 Enough reminiscing about my boring life though, back Contact Theatre. Why in the world does it look like THAT?!

To find out we’re going to have to go all the way back to 1972, a time when most of you were but a twinkle in your parent’s eyes, and some of you were sprightly young things going out on the piss on a Friday to Rotters, squeezing into bell-bottoms and drinking 3p pints of lager and black.

That year, two men; Barry Shepherd, who was the General Manager of the Manchester University Theatre, and Hugh Hunt, a Professor of Drama, founded Contact as the Manchester Young People’s Theatre. 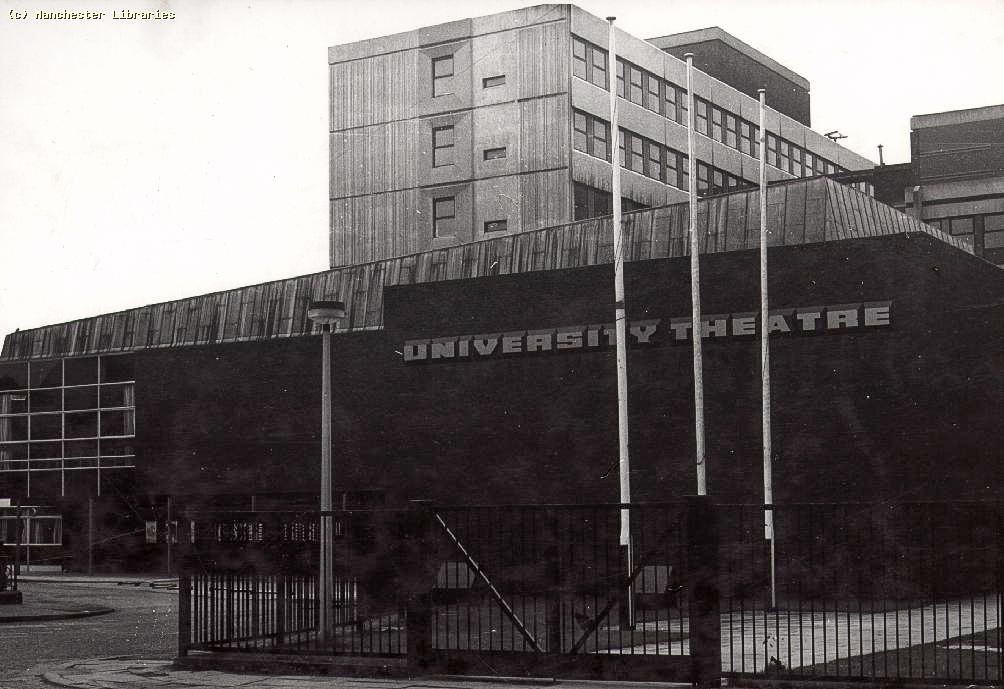 As part of the University of Manchester, the idea was that this was a place where young people could change their lives through the arts, placing them at the heart of everything including programming, decision-making and even staff appointments.

It was all rather revolutionary at the time, and still is – as these are values that Contact hold on to dearly to this very day. 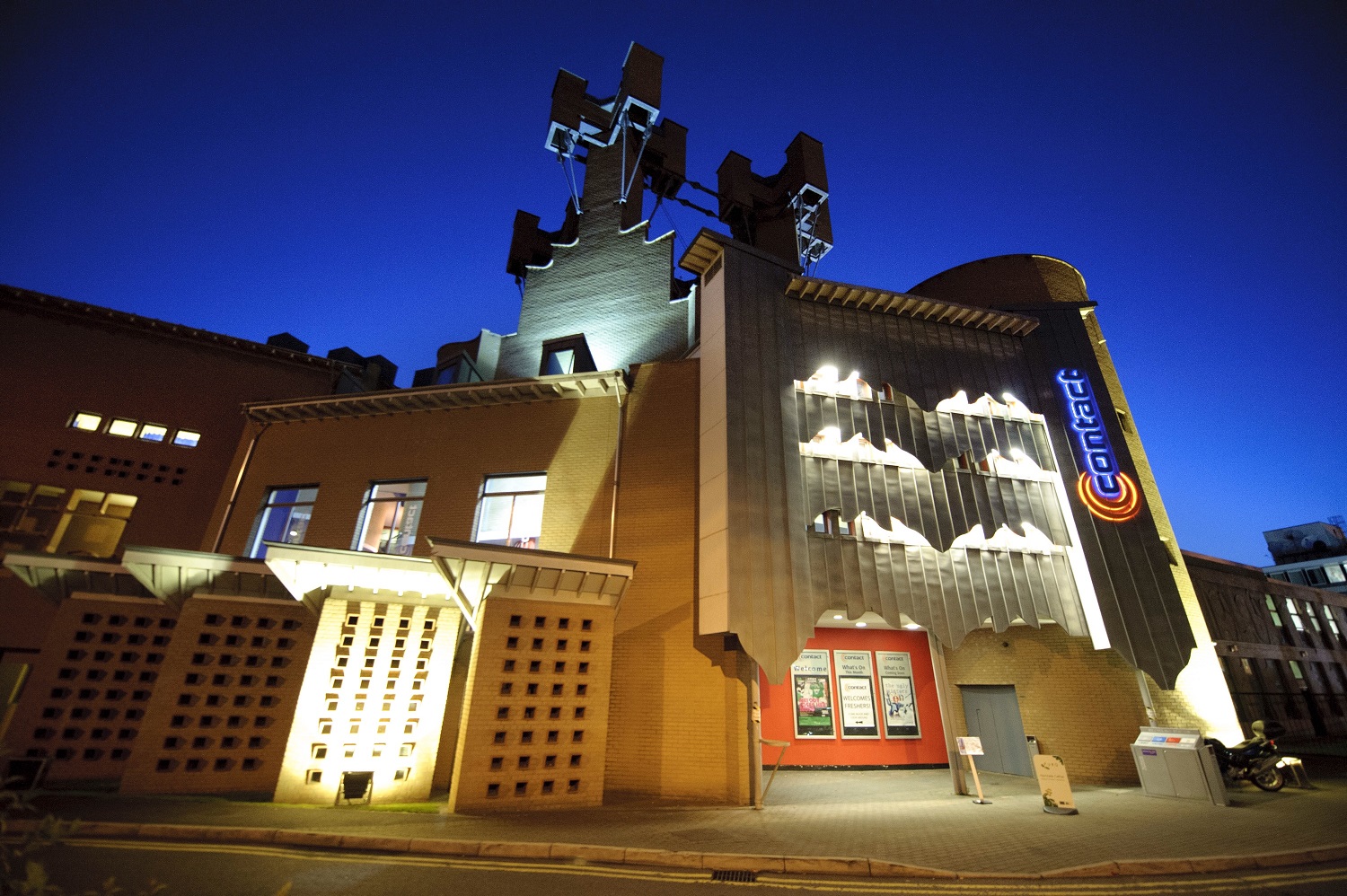 The architect, Alan Short and Associates were tasked with the design, and clearly the most distinctive part of the building is the ventilation chimneys, which look a little bit like a badly played game of Tetris, or indeed a drawing of a Medieval castle by a particularly ungifted toddler.

Don’t let this make you think that I don’t like them though – they’re certainly eye-catching – and the reason for their existence is actually really rather revolutionary. 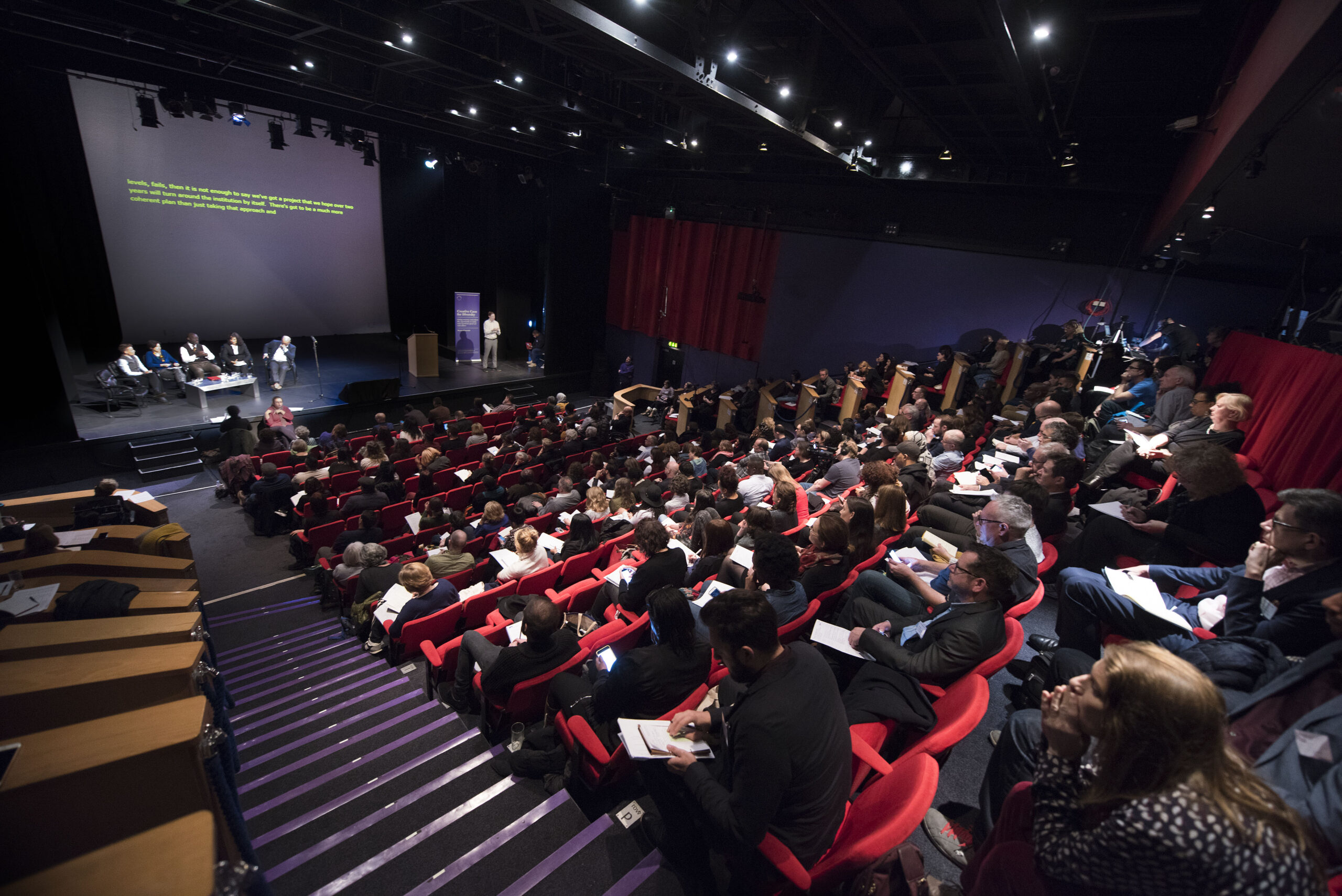 The unusual design was, at the time, totally original; not only do they look a bit mad but the distinctive chimneys are part of a concerted effort to make the building as carbon saving as possible – having it completely fully naturally ventilated.

At the time, in the late 90s, concerns such as these were almost entirely unheard of, as phrases that we hear every day now like ‘climate change‘, ‘carbon neutral‘, and ‘sustainability‘ were rather far back in people’s minds back at the turn of the Millennium. 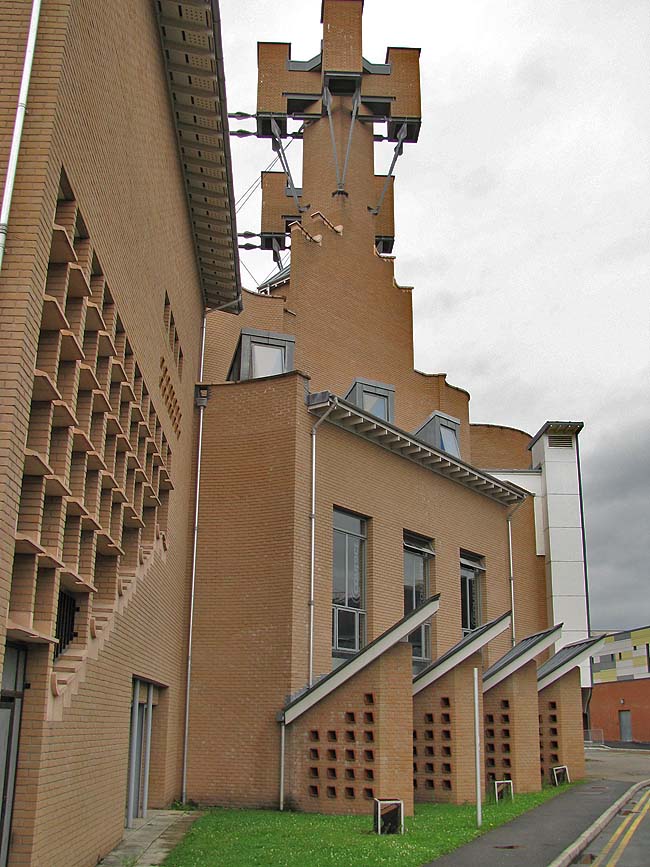 Comparing this with today, where pretty much every single new and existing structure being developed in the world is focused around these principles, ones which were adopted early at the Contact Theatre, showing just how revolutionary it was (and still is).

The building was even nominated for a RIBA Award, with judges describing the structure as “a brick built Gaudi come to Manchester“, an understated and uninspiring building that has “been transformed into an elaborate and engaging monument with a strong independent image, perversely a highly appropriate response to its context.” 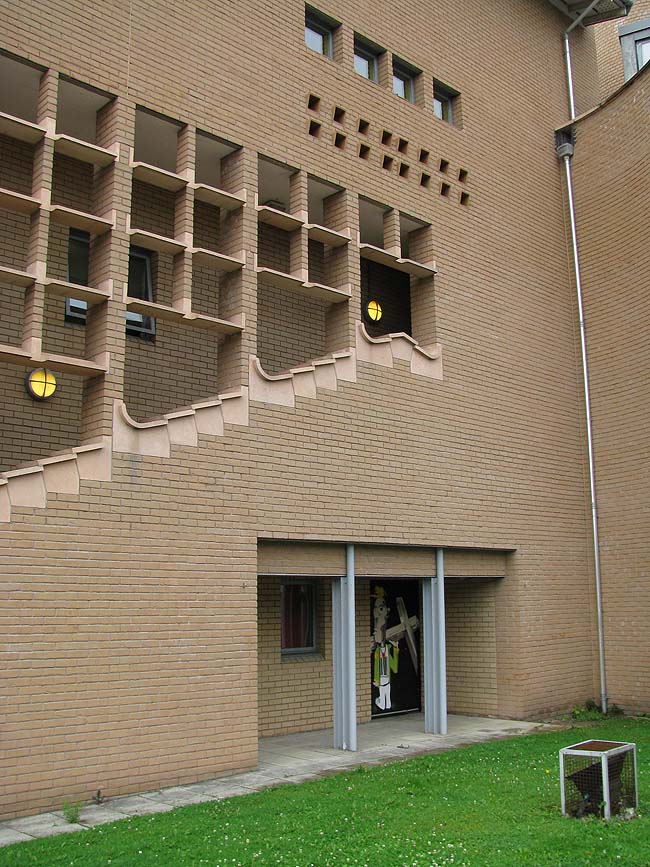 They added, “The project has a strong environmental agenda made manifest in the strong root forms of the natural ventilation system: these combine with a zinc ‘curtain’ at the entrance to create a highly theatrical effect, with references to Gaudi and the castles of southern Germany, in some way architecture as stage set.

You’d have probably noticed that over the last few years there’s been a flurry of construction over at the theatre, and just last week they announced that their massive £6.75m redevelopment was complete. 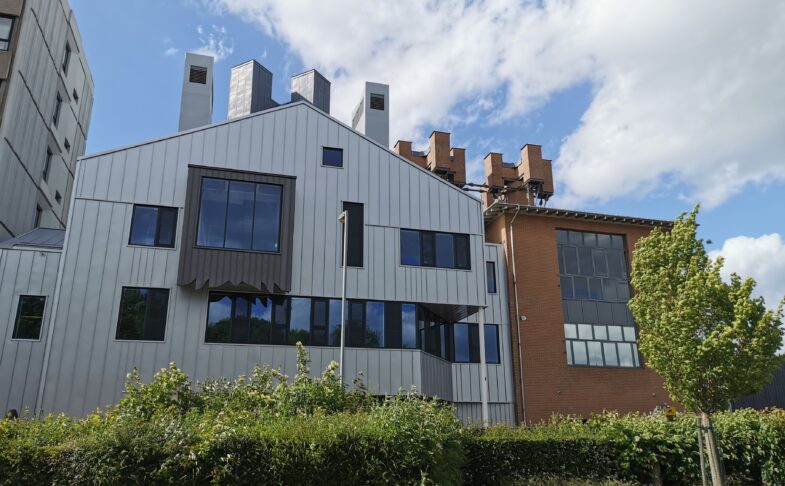 As part of this, vast areas of the theatre have been completely changed, and there are more rehearsal studios, refurbished performance spaces and office, as well as a dedicated arts and health space, which Contact says is the first of its kind in any UK theatre.

The new additions have all been designed by sustainable specialists Sheppard Robson, but, as mentioned earlier, one of Contact’s main values is that it places the idea of youth governance at its very core. 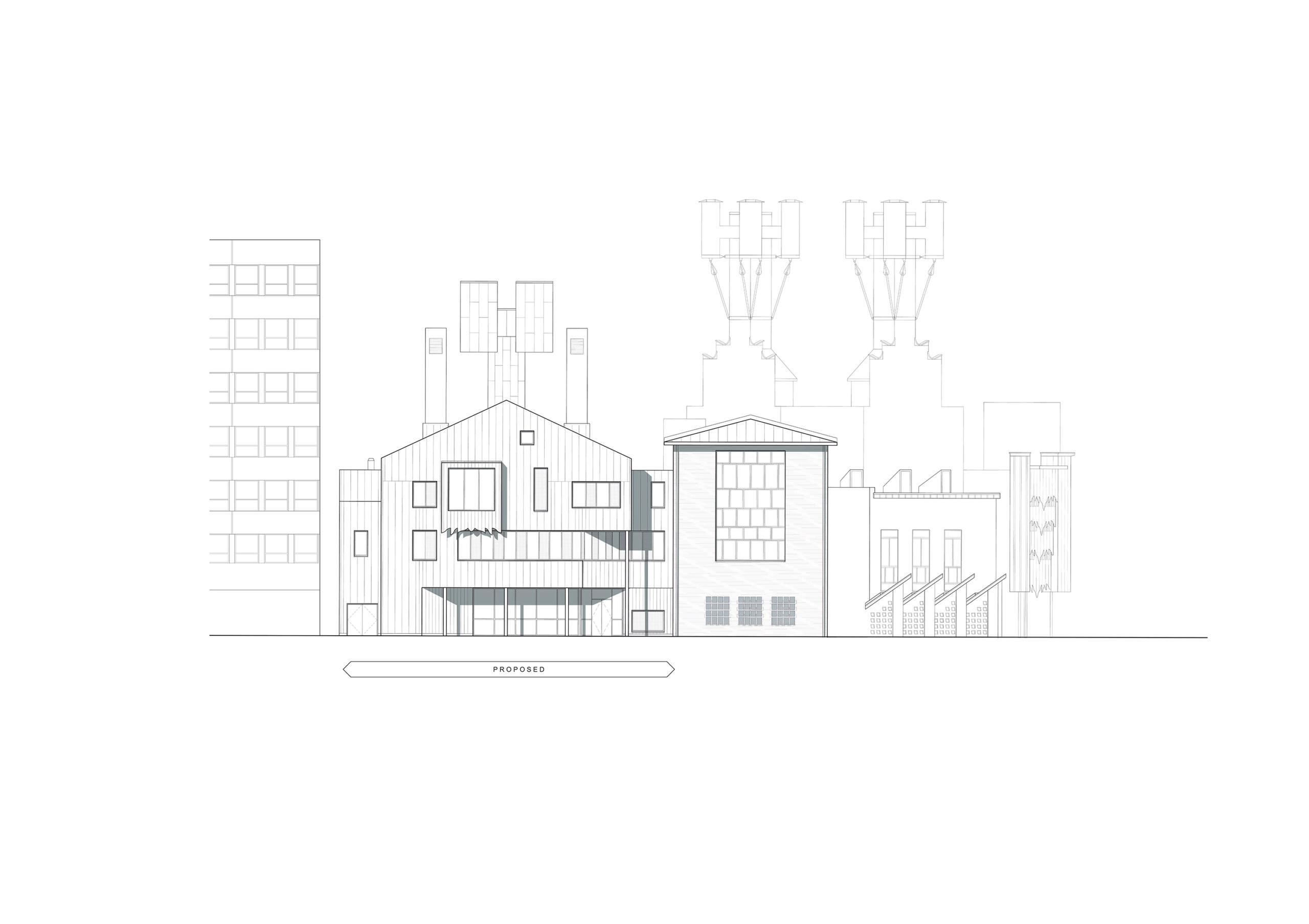 Thus when the redesigning of the building was due to take place, Contact created a separate consultant group – Con:Struct – a team of young people that played a significant role in the development of the design.

The Con:Struct team had their say on everything, from the appointment of the design team and contractor to the colours used on the building itself.

It was always vital that the original building remained, and was re-designed and re-used, and it was already a rather unusual building in the first place. 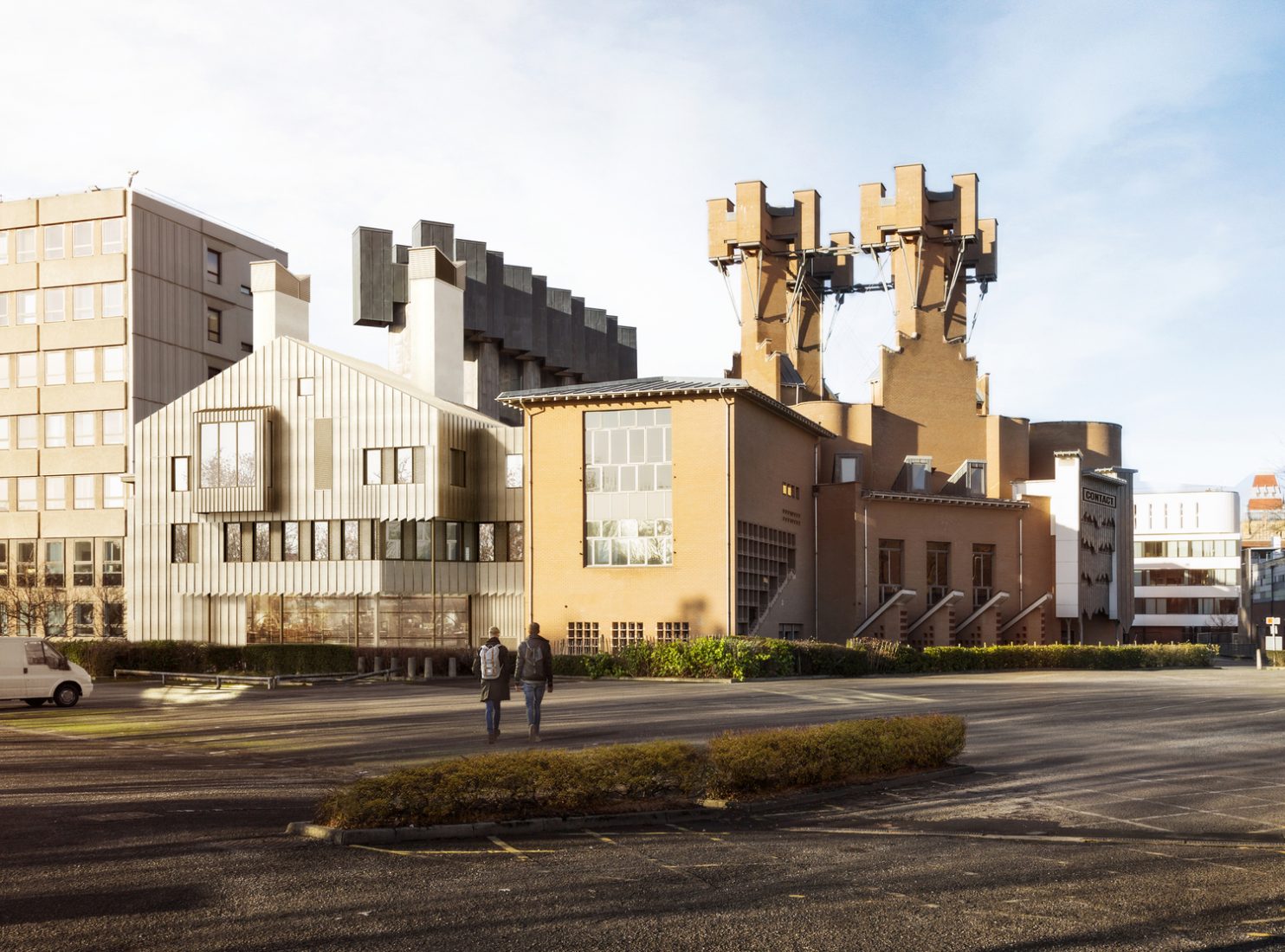 In order to secure that sweet, sweet Arts Council funding (as well as continue the revolutionary work started by Alan Short in ’99), the design was made to improve on this remarkably low-carbon performance of the building and make it better, committing to a complete natural ventilation of the new spaces from day one.

As a result, they added the two additional chimneys on top – keeping in with the original design of the larger ones, as well as reducing carbon footprints with tonnes of natural light and the use of state-of-the-art LED technology.

The interior too now has a new and improved public bar; free work and social spaces, and a significant number of spaces that people can book, be it for performances or even parties and weddings! 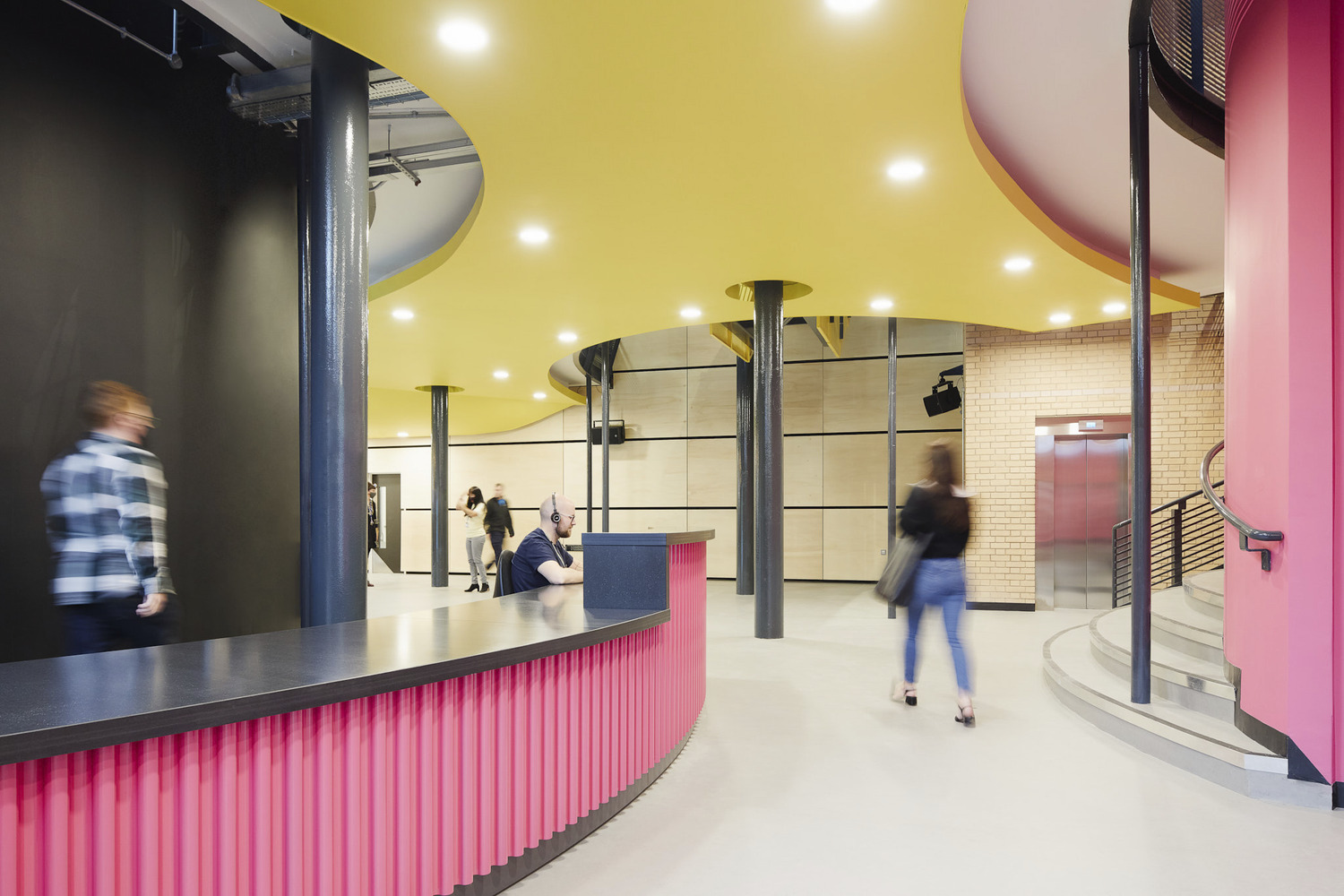 Matt Fenton, Chief Executive and Artistic Director at Contact said: “We are overjoyed to be reopening Contact to the public after 2 years of building works, and the challenges of the global pandemic. It feels right that our first show is from Contact Young Company.”

Thus it’s back to ‘business as usual’ over at Contact, as the post-pandemic landscape has allowed them to finally re-open their doors to in-person theatre and performance, with a rather packed calendar of events set for the forthcoming Autumn/Winter season.

For details on what’s coming up, check out our listings guide…

Coming this Autumn to the Newly Re-Opened Contact Theatre