Superbia Spotlights meets the editors of FRUIT; giving a home to queer writing from around the world. 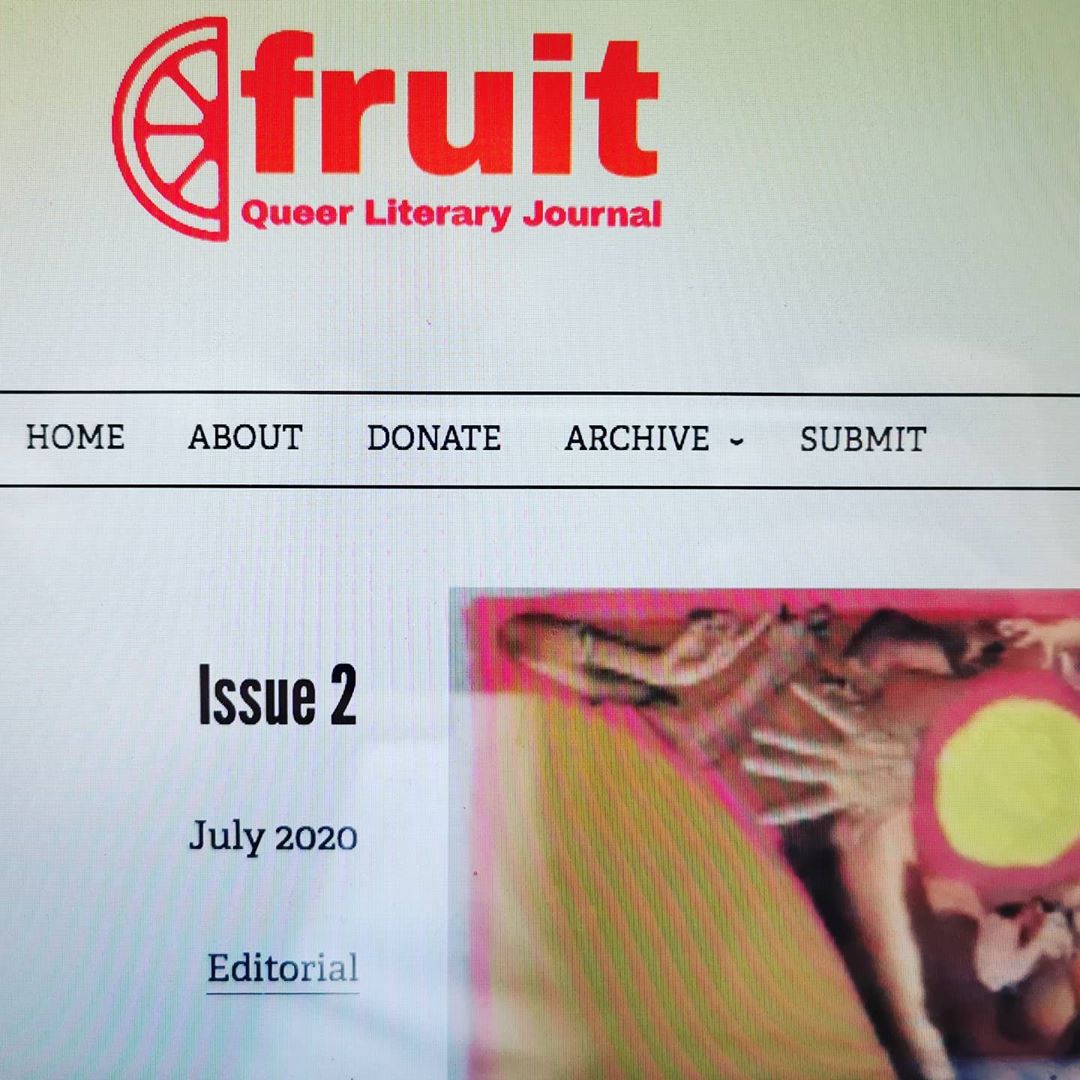 As one of the UK’s leading LGBTQ+ charities, it campaigns for LGBTQ+ equality, celebrates LGBTQ+ life and creates opportunities that engage LGBTQ+ people in Greater Manchester so that they can thrive.

At Superbia we were thrilled to support the launch of FRUIT with a Superbia Grant. The journal promised to showcase diverse voices in writing and art from a global queer community and in just two issues it has excelled at doing just that. 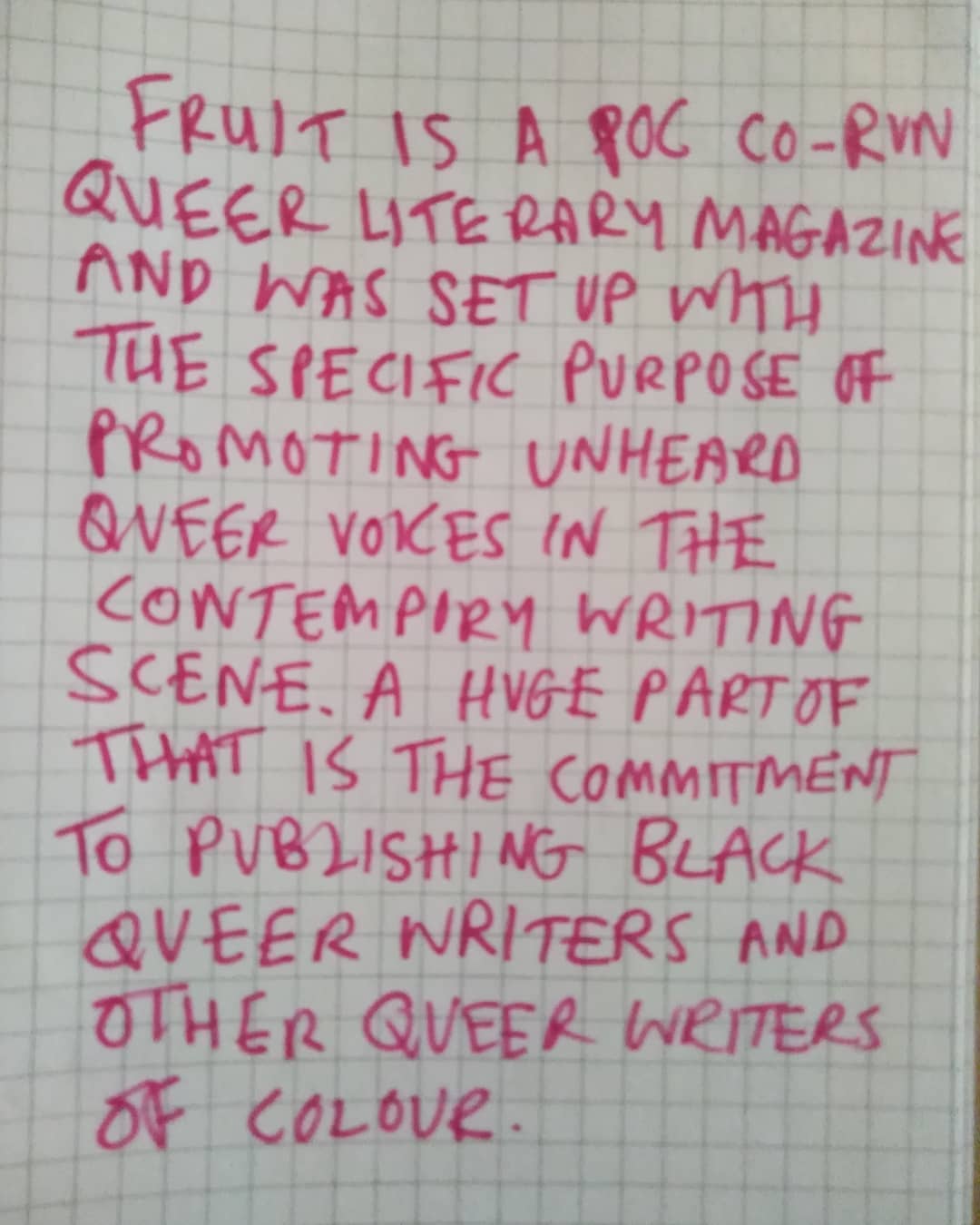 We spoke with the FRUIT editorial team Tawseef Khan, Hannah Levene and Tom White to find out where the journal has come from and where it’s heading…

Hello team FRUIT. Let’s begin with introductions. Who are you, and how are you?
TK: I’m Tawseef, a lawyer, academic and writer. I’m an activist. I curate stuff. I have fingers in many pies! At the moment I’m doing an MA in Creative Writing at the University of East Anglia. Find me on Twitter.I’m really excited to talk about Fruit.
HL: I’m Hannah. I’m cobbling out a career as a poet and doing my PhD with the Creative Writing department at Roehampton. I’m always looking for ways to find community in writing, it’s been great to have Fruit be a part of that over the last year or so. I tweet sometimes
TW: I’m Tom, and I’m also doing a PhD; mine’s at Southampton. It’s practice-based and focussed on poetry, so that’s what I’m writing. I work as a teacher too. You can find me here. Thanks for giving us the space to talk about Fruit!

Can you describe what FRUIT journal is and where the initial idea came from?
TW: Fruit is a queer literary journal based in Manchester. It aims to promote unheard voices, so we’re particularly interested in non-mainstream kinds of writing and perspectives which have not received enough attention. As well as providing a platform, we aim to nurture the writing we publish. We work closely with our writers and sometimes a piece can go through several drafts.
The reason the whole thing came about is that, as a writer myself, I’d noticed the lack of queer platforms for my work in the UK. Hannah and Tawseef felt the same, so we put Fruit together. That was at the end of 2019. Since we started, a number of queer magazines have appeared online, which is great! 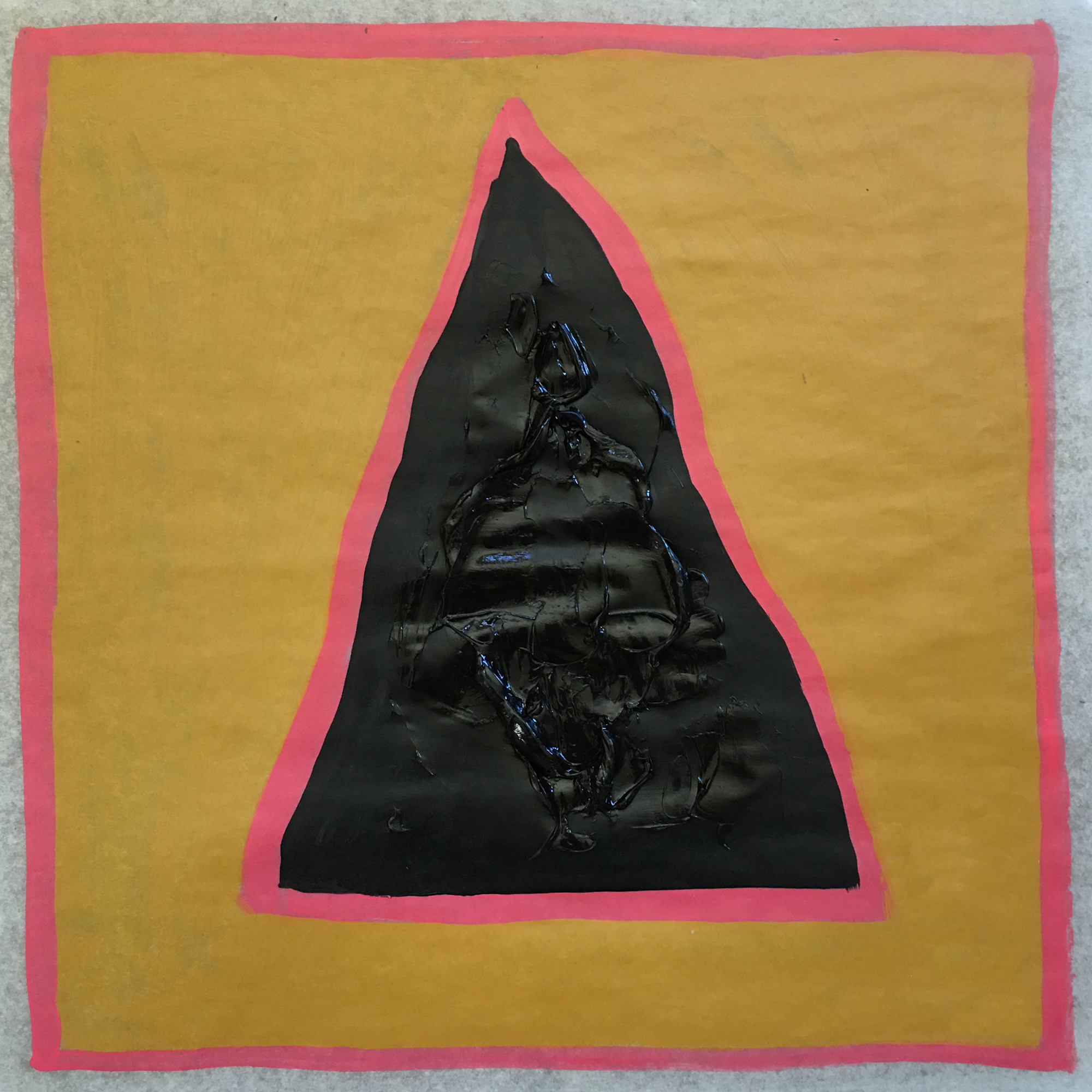 Who are your writers and where do they come from?
TW: Our writers come from the LGBTQ+ community. We’re based in Manchester, and love to hear from writers in the North and the UK in general. But the great thing about being online is that we can be international, and the different perspectives that come from writers outside the UK is exciting. Providing a platform for perspectives that have been less heard in mainstream literary circles is important to us, so we’re keen to work with working class, trans and POC writers. We’re also very much interested in writers engaged in non-mainstream practices – who play with form as well as content. In fact, the reason we don’t categorise the journal into poetry, fiction and non-fiction is that so much of the writing we publish is none or all of the above.
TK: We’ve had writers find us from writers forums, from social media, through university channels, through chances upon the issues themselves. What is exciting about Fruit is that, although we are super proud of being based in the North, we’ve published work from writers with connections to Costa Rica, Hong Kong, India, Ireland, Singapore, Gibraltar, Germany, Greece, Nigeria (I’m probably forgetting somewhere) and that is really rewarding. I like the idea of bringing people together from around the world.

“We only choose writing that speaks to us. I’m proud of everything in the Journal…”

Do you each have a piece of work from either of the first two issues that you were drawn to and are particularly proud of publishing?
HL: Ashley Barr’s The Shower is a Symbol of Living was a stand-out piece for me from Issue 2. It manages to be sweet, somehow, very caring and kind of sad in this off-kilter way, as well as funny and doesn’t that description sound exactly queer? Ashley’s piece is made up of parts bought together from all different places to, in their own way, talk about love. I like queer writing that’s queer to the bones of it, it could be saying anything but you know that it’s queer because of the way that it walks. That’s the type of writing I’m drawn to, that’s what Ashley’s piece does.
TW: We only choose writing that speaks to us, so I’m proud of everything in the Journal. Having said that, it’s particularly enjoyable when a writer really engages with feedback; seeing a piece of writing develop is very rewarding. For that reason, I’m proud of Kole Fulmine’s piece in Issue 1. I also love the art we had from Joanna Walsh; she trusted us with it before we had an issue out, which means a lot.
TK: I loved publishing Jiaqi Kiang’s ode to eggs, Oeux. I felt that it was playful with language, inventive with form, fun. And because of its size, I think it’s perfect for an online magazine – really easily digestible (pun intended)! On the other side, I’m proud to have published Brett Darling’s Of Course. It’s a challenging piece, but I think it shows how rewarding experimental work can be if you spend some time with it. And I feel like, for a piece where the writing is so compact, it has great energy and is really suffused with emotion.

Who are some of the queer writers past and present that inspire you?
TK: It’s almost cliche to mention James Baldwin, but… James Baldwin! In the days of MSN chat rooms, somebody recommended Giovanni’s Room to me and it totally changed my world. The more I’ve learned about him, the more inspired I’ve become by his smarts. He is really the gold standard of writer-intellectuals for me. In terms of queer writers in the modern day, I love what Chinelo Okparanta, Edouard Louis, Bryan Washington and Ocean Vuong are doing. And I am a huge Colm Toibin stan. The rhythm of his sentences, uff!
HL: I just read poet Anna Cathenka’s latest chapbook Computer Dreams from Broken Sleep Books which blew my mind. Isabel Waidner is a continued inspiration. From the past? I fell in love with writing through Sister Spit and those messy queer novels; Michelle Tea, Ali Leibegott, Eileen Myles, Laurie Weeks, Dodie Bellamy.
TW: Too many! My influences in poetry are CA Conrad and Jack Spicer. I’m excited by Billy-Ray Belcourt’s poems, which integrate queer theory in an accessible way. In terms of fiction, Samuel R. Delany’s The Mad Man and Through the Valley of the Nest of Spiders are liberating and challenging in equal measure. Recently, Stephen van Dyck’s People I’ve Met from the Internet impressed me. And Mattilda Bernstein Sycamore’s essay collection That’s Revolting! Queer Strategies for Resisting Assimilation really influenced my thinking; can’t wait for her next anthology – Between Certain Death and a Possible Future: Queer Writing on Growing Up with the AIDS Crisis – to be published next year. 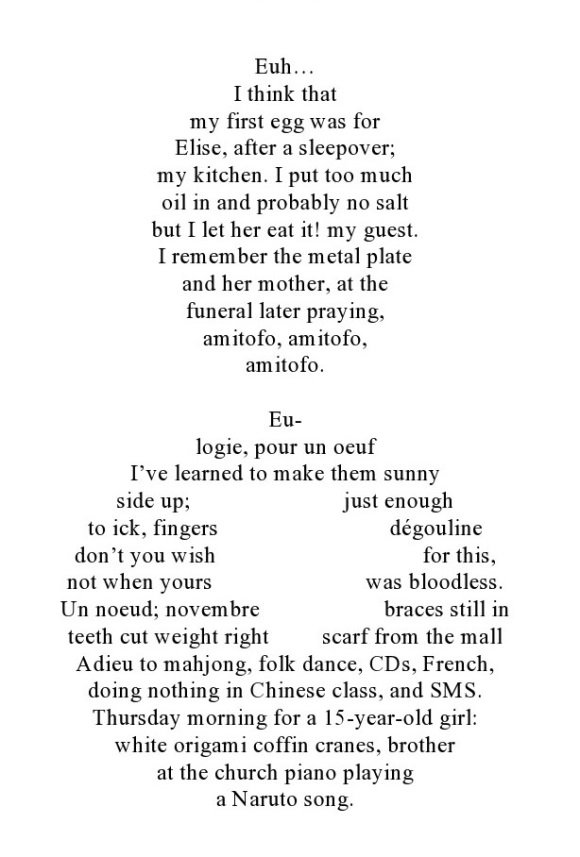 What kind of work would you love to see in forthcoming issues of FRUIT?
TW: I’d love to see more non-fiction; not a lot of that has been submitted to us and we’re a bit thirsty for it. Hybrid pieces – mash-ups of prose and poetry, for example – are right up my street. And anything that queers English language and literature – work in translation, work that messes with grammar or cheeks the canon.
HL: More genre-bending work. But also just the best poetry out there. And work from British writers or more specifically writers living in the UK who have a queer perspective on living here right now. I’d love to delve into that.
TK: Already we’ve published quite broadly – flash fiction, plays, fiction-poetic hybrids – but I definitely want more non-fiction! I want stuff that pushes the boundaries. Stuff that goes beyond a focus on the body. I’d also love to see maybe some interviews or reviews, writing that engages actively with other writing, or other art, or other artists.

What are your ambitions for where the journal might go in future?
TW: We’re keen to nurture a queer literary community; publishing the journal and working with writers is one aspect of that but we’d love a more interactive space. We’re hoping to hold events where contributors to the journal, readers and writers can present their work and discuss it. We’re also hoping to include reviews and interviews.
HL: We’re focusing our behind the scenes efforts on ways of paying our contributors. Whilst we work on that, the impetus in this issue and going forward is to be sure our writers can (at the very least!) know they are of value to us through our engagement as editors with their work. Having active and fruitful conversations with our contributors has been a way of saying – ok, sorry we can’t pay you right now, but we want to try and put in the same amount of work as editors that we’re asking of you as writers. And we’re all writers too and know how gratifying it can feel and how much the work can benefit and evolve, grow, continue on from just having a conversation about it! But we’d like to do that as well as give everybody some cash… we’re working on it.
TK: I’m definitely interested in community and space. What can we do to bring people together? How can we connect the people that we publish, creating/curating this family of really ace queer writers? And what can we do to connect with our readers and get them connecting with each other? The activist side of me is also curious about what we can do to nurture our readers and writers. Do we have the ability to educate through the magazine? Do we have the ability to help writers get even better, obtain access to bigger platforms? Yeah, all that stuff. Oh, and maybe some really pretty physical copies! 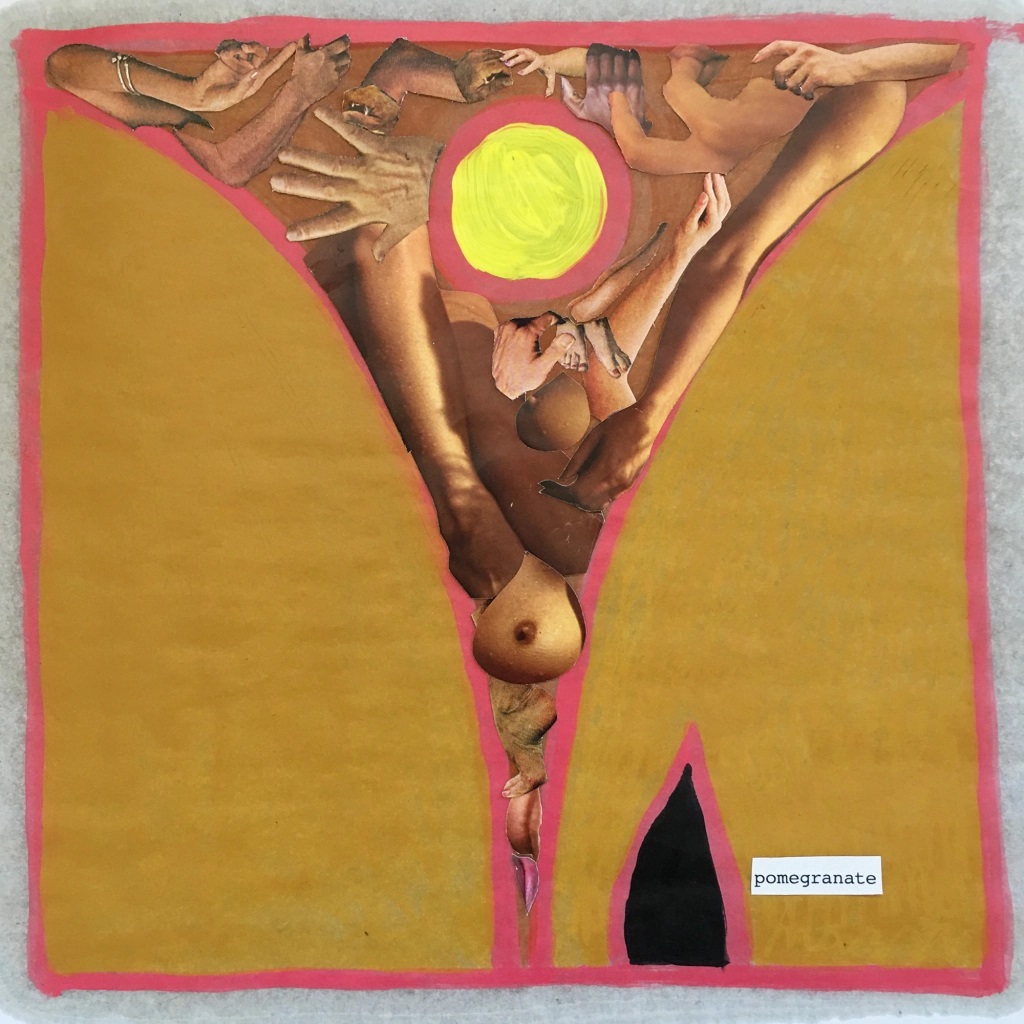 How and when can people submit their work to you?
TW: You can email writing to us at any time. All the guidelines are on our submission page:

Thank you to Fruit! You can follow the journal here: