District: A Welcomed (New) Wave in the Manchester Food Scene

Manchester isn’t lacking in food culture. Quite the opposite: the scene is vibrant, versatile. 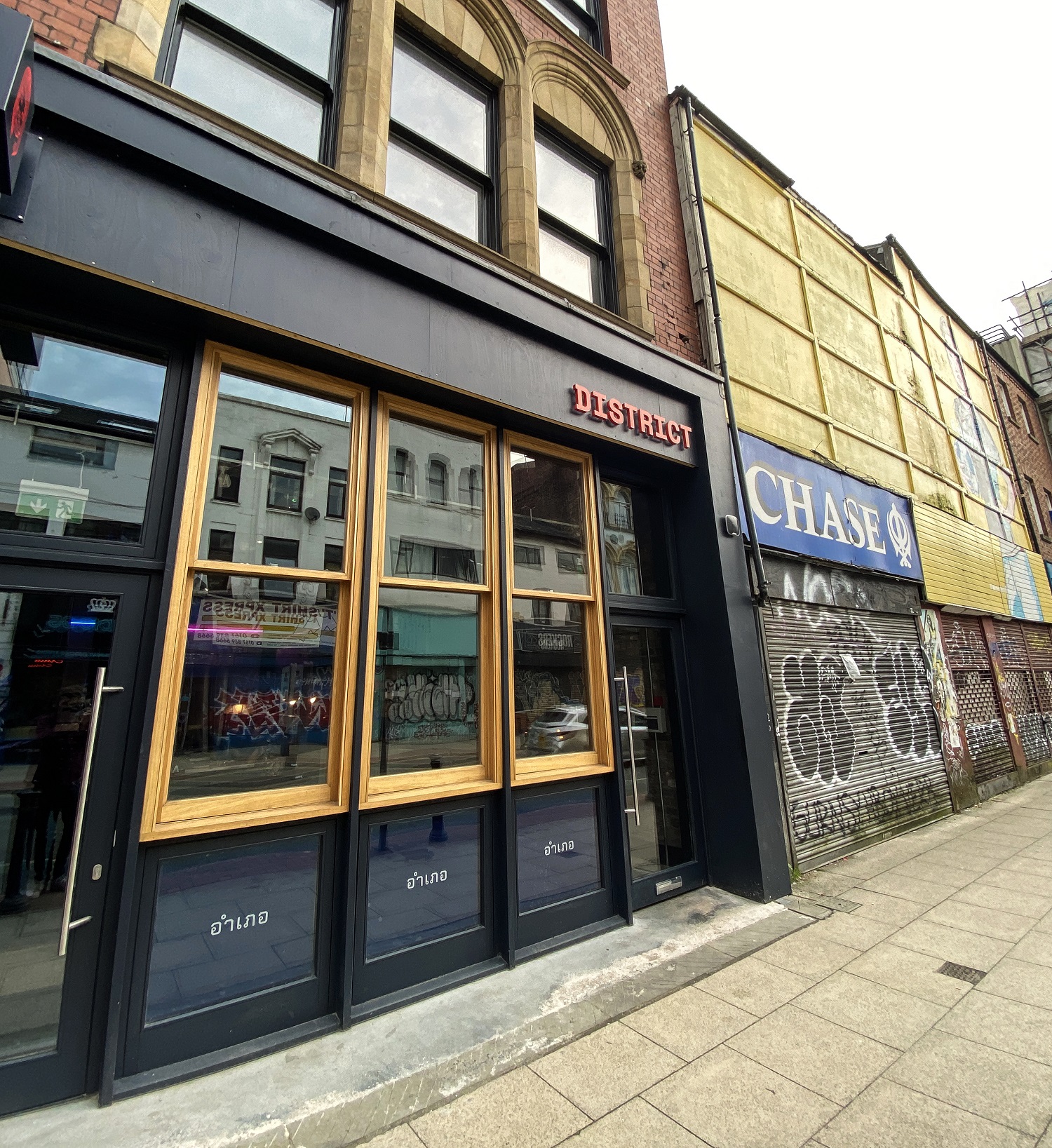 What it is missing – was missing – is a Neofuturist BBQ-focused interpretation of Bangkok’s streets, primed in purple and dipped in spice.

The guys who own Tokyo Ramen know what Manchester needs. After all, their spot in the Northern Quarter has established itself – amongst a peculiarly niche and dense competition of other ramen joints – as a Manchester institution. They’ve been here long enough to see trends, still quick enough to anticipate them. 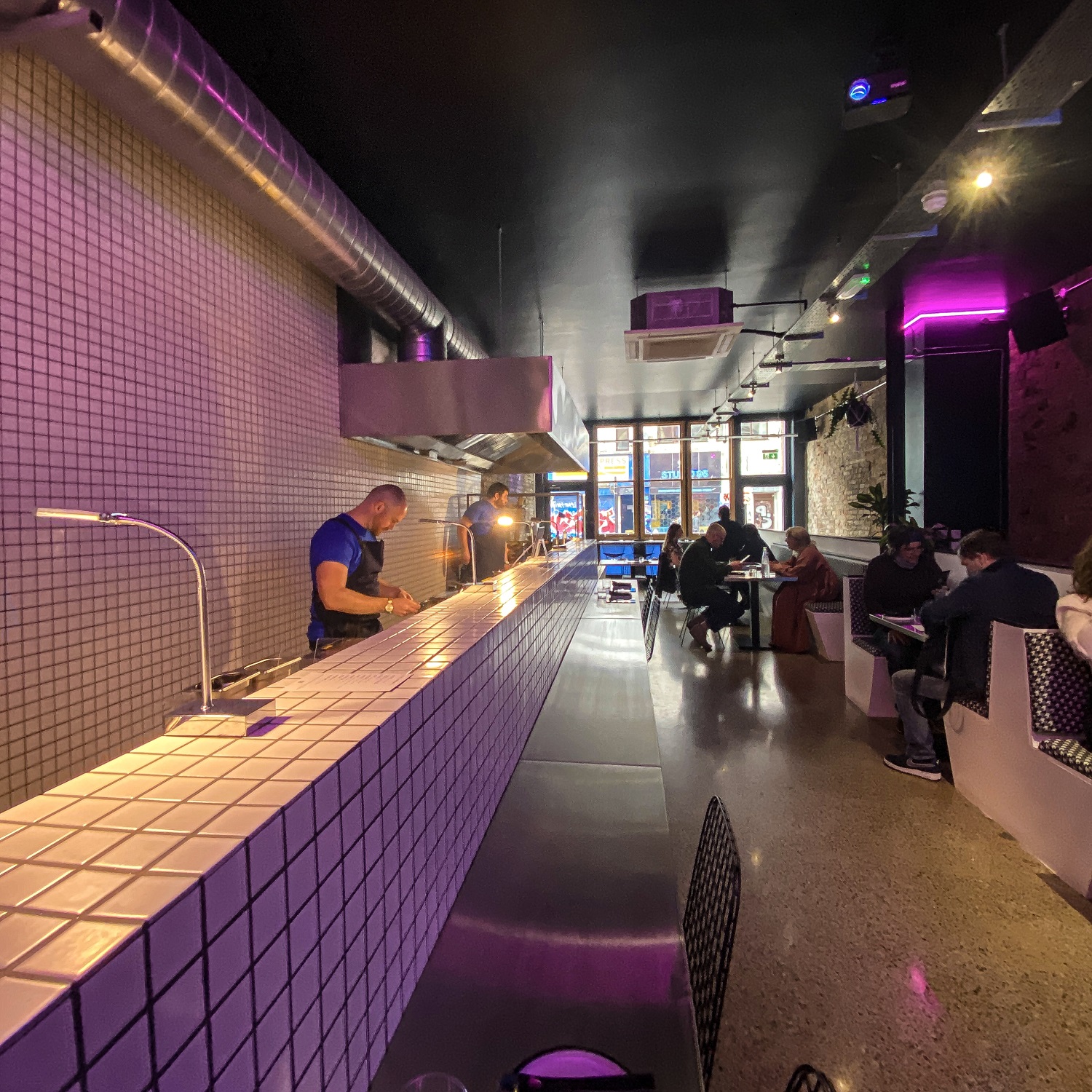 Their next project, DISTRICT, is here to stay.

District isn’t Thai food: it’s Thai-inspired. A nice semantic loophole which allows them to cook a predominantly Thai menu whilst excusing their use of non-Thai ingredients.

Thai inspiration allows District to put things like ‘Not Tacos’ on the menu: perfectly formed morsels of beef brisket saturated in a juicy, coconut-infused curry, served on a ‘pancake’ – heavily influenced by southern Thai ‘roti’, definitely not a taco. 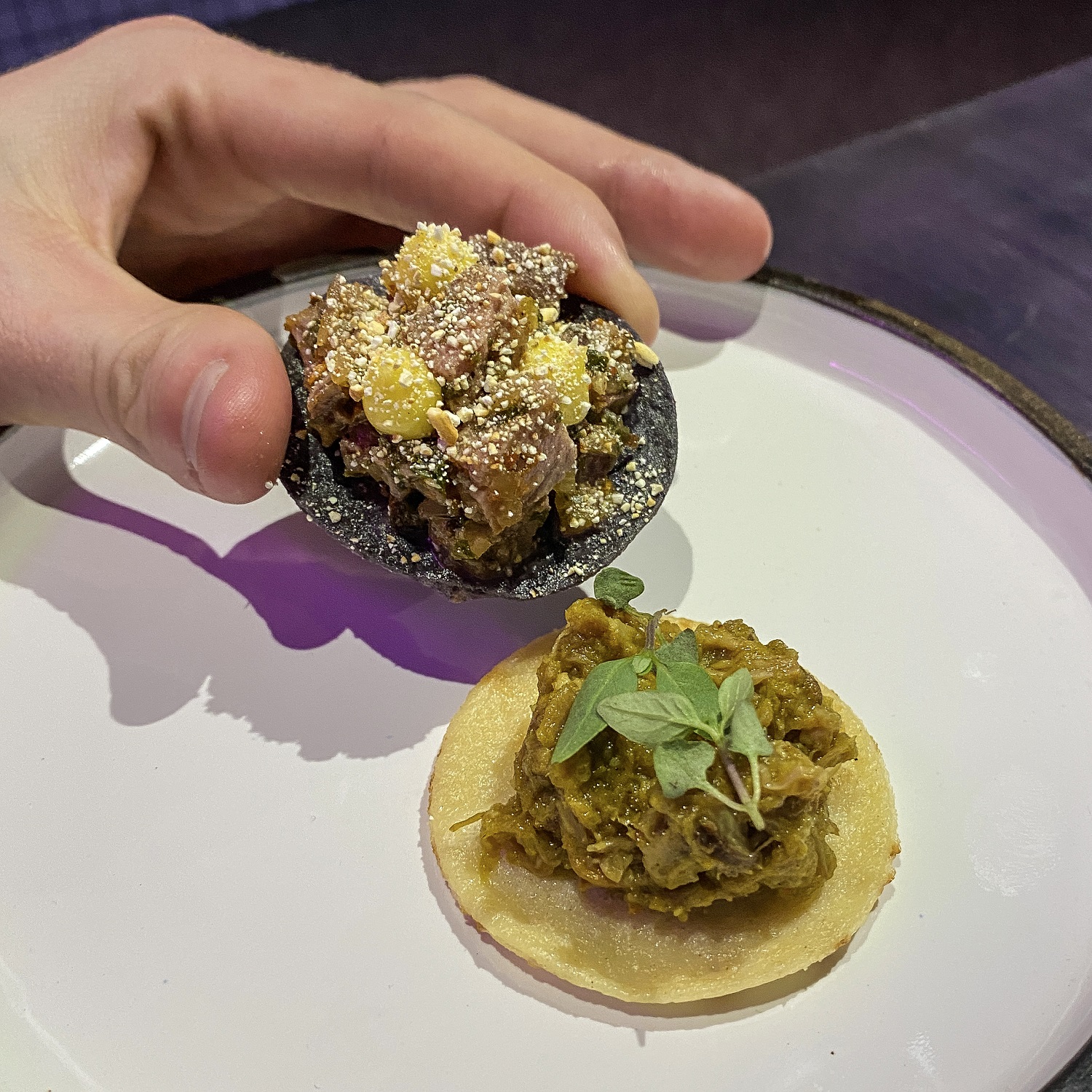 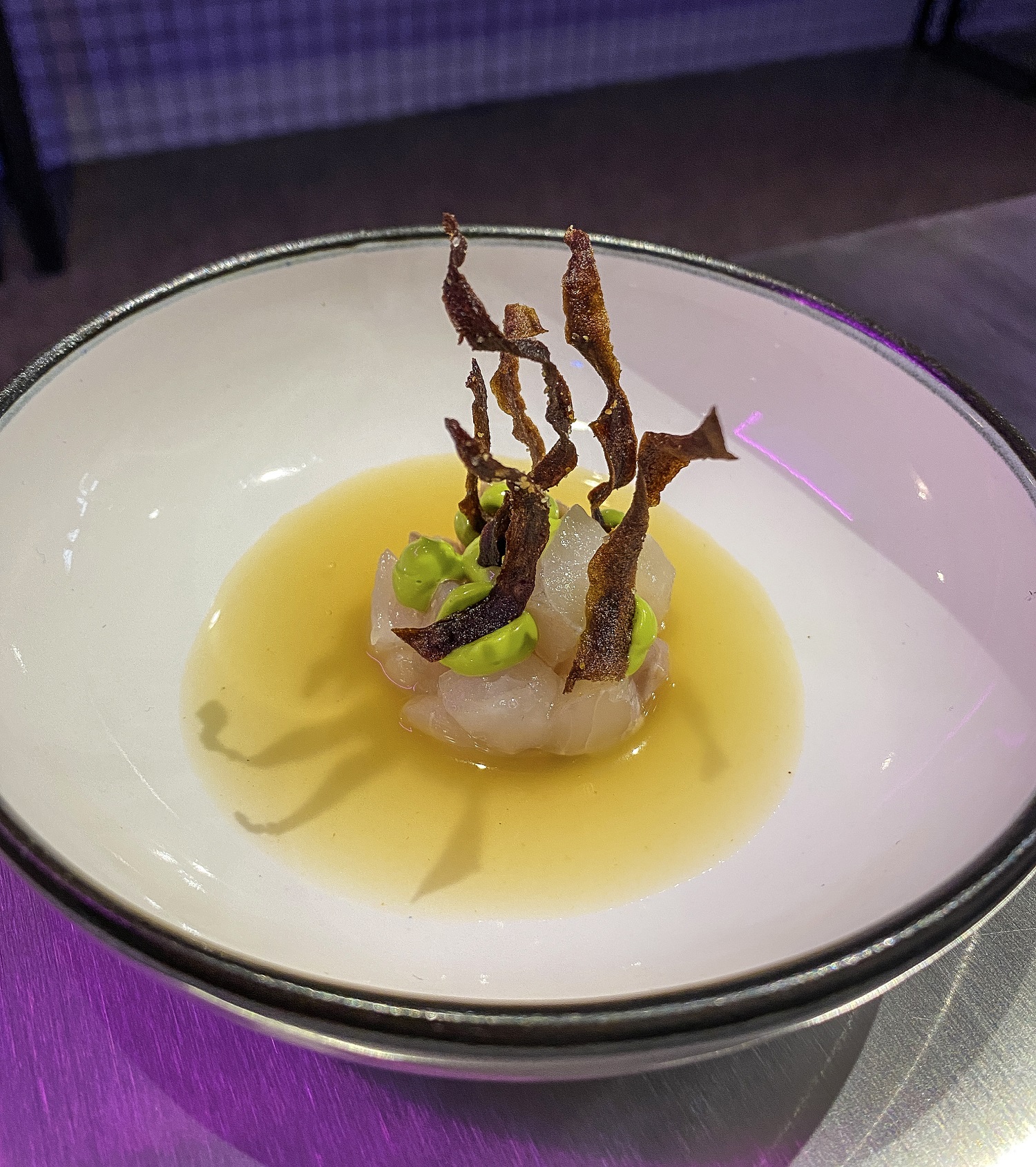 It’s a neat bit of terminology that allows creative expansion away from any rigid structures, and allows dishes that might not be initially obvious to become more accessible.

Saying that, the menu isn’t just Thai in ingredients and flavour, but in style. The focal point of the kitchen, the barbeque, wisps as you walk through the door, and graces each dish with char – like the heat of a Bangkok corner, sweltering, humid, alluring. 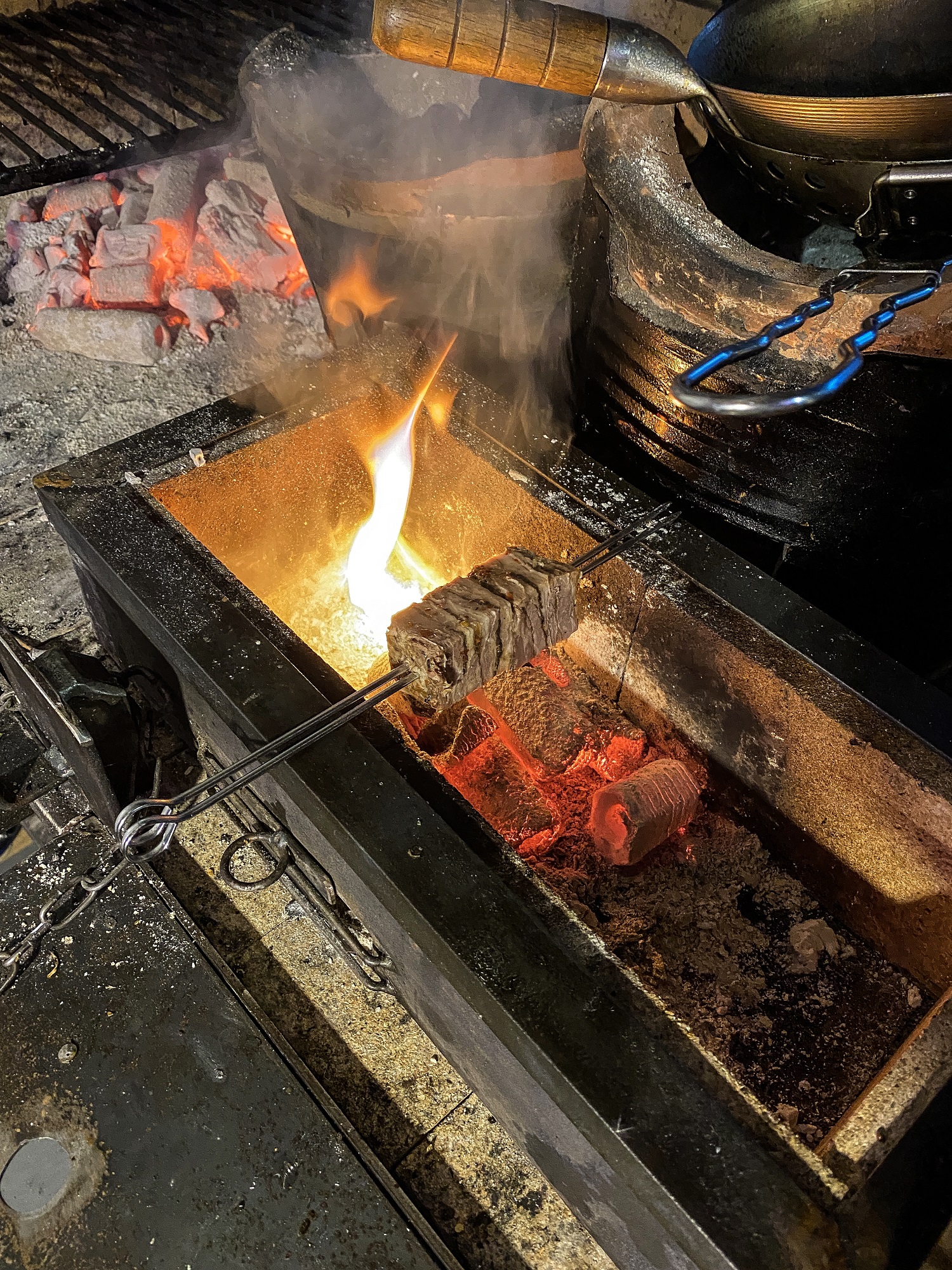 The touch of the barbeque is at once overt and incredibly subtle, underscoring dishes and proving them to be well thought out, like Chicken Wings, sufficiently blackened and drenched in a thick molasses-like caramel, or delicate and creamy soups offset with smokey shimeji mushrooms.

One of District’s defining features is the use of colour. This is on the plates, but importantly, also on the walls, in the ceilings, and even in reflections from the wine glasses – well, multipurpose squared-off water glasses. 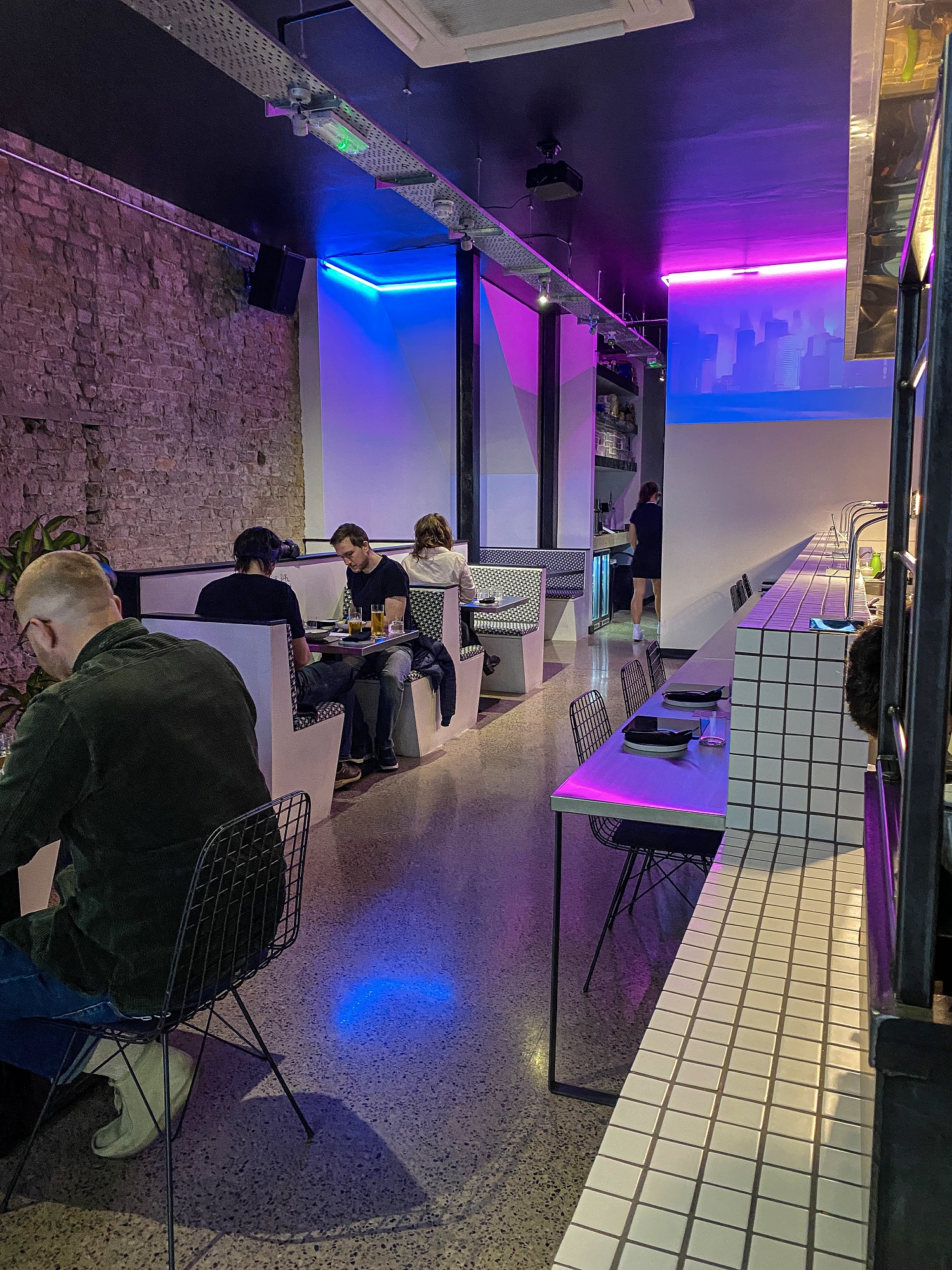 District’s trademark purple, an absolute signifier of their futuristic intentions, bounces off the stainless steel tables and is caught in the hues of their broths.

One particular dish, a corn fed chicken with perfectly crisp skin, served on a white coconut broth that is punctuated with a green oil – some sort of basil, maybe? – lent itself particularly well to the background of purple that beamed onto it. 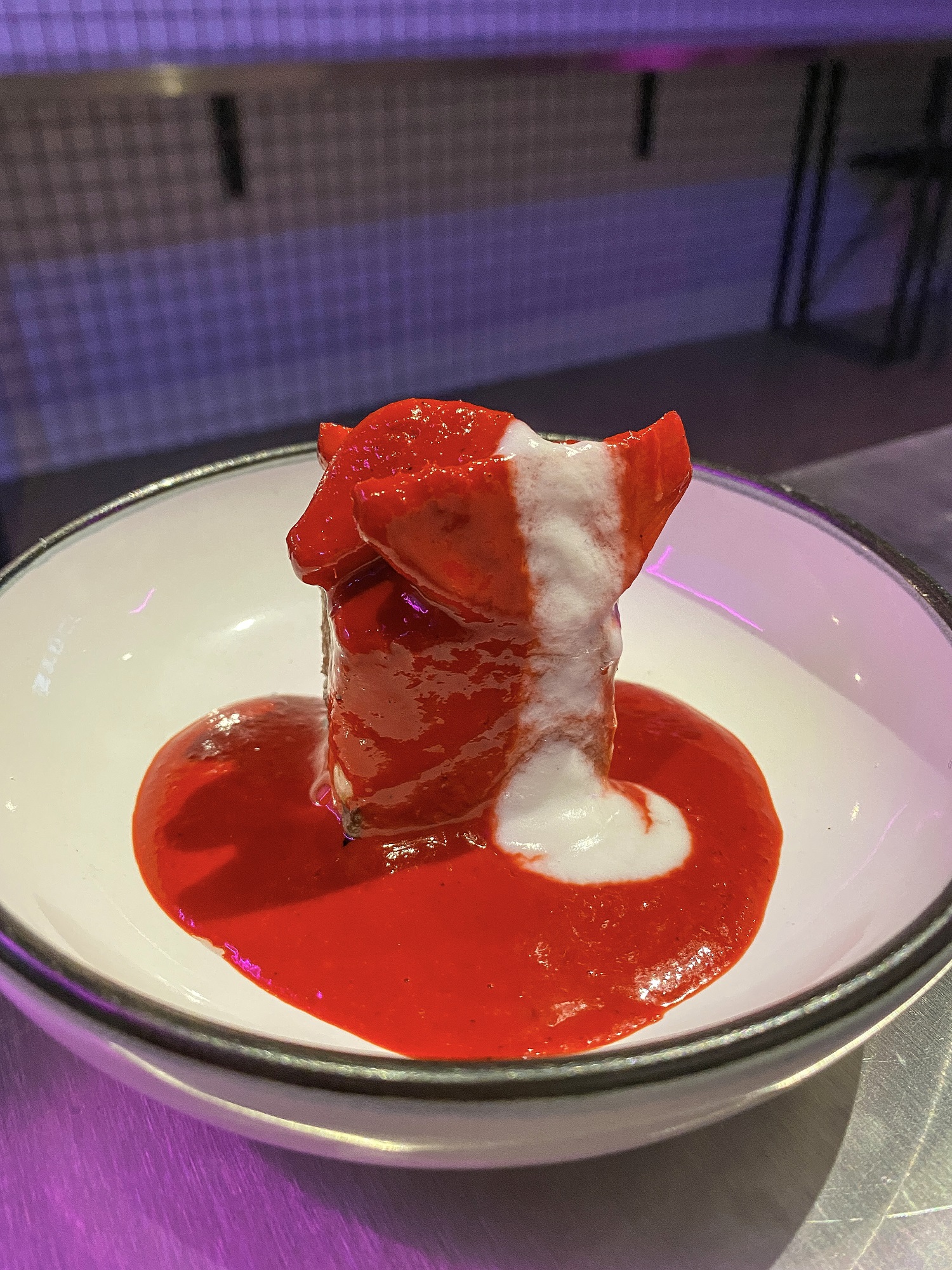 The most aesthetically recognisable dish, a red curry served on top of Angus Beef Short Rib, is daring and bold. It’s the reddest dish I’ve ever seen. It’s the sort of plate that is self-conscious enough to isolate its defining element and elevate it, whilst knowing that this isn’t always a particular flavour (it was still absolutely delicious.)

Whilst the menu is typically meat heavy, one of the standout dishes – and an absolute trademark amongst other, modern, Thai-influenced restaurant exports – is a play on som tum, or a variation on a salad including Northern or Isan influences. 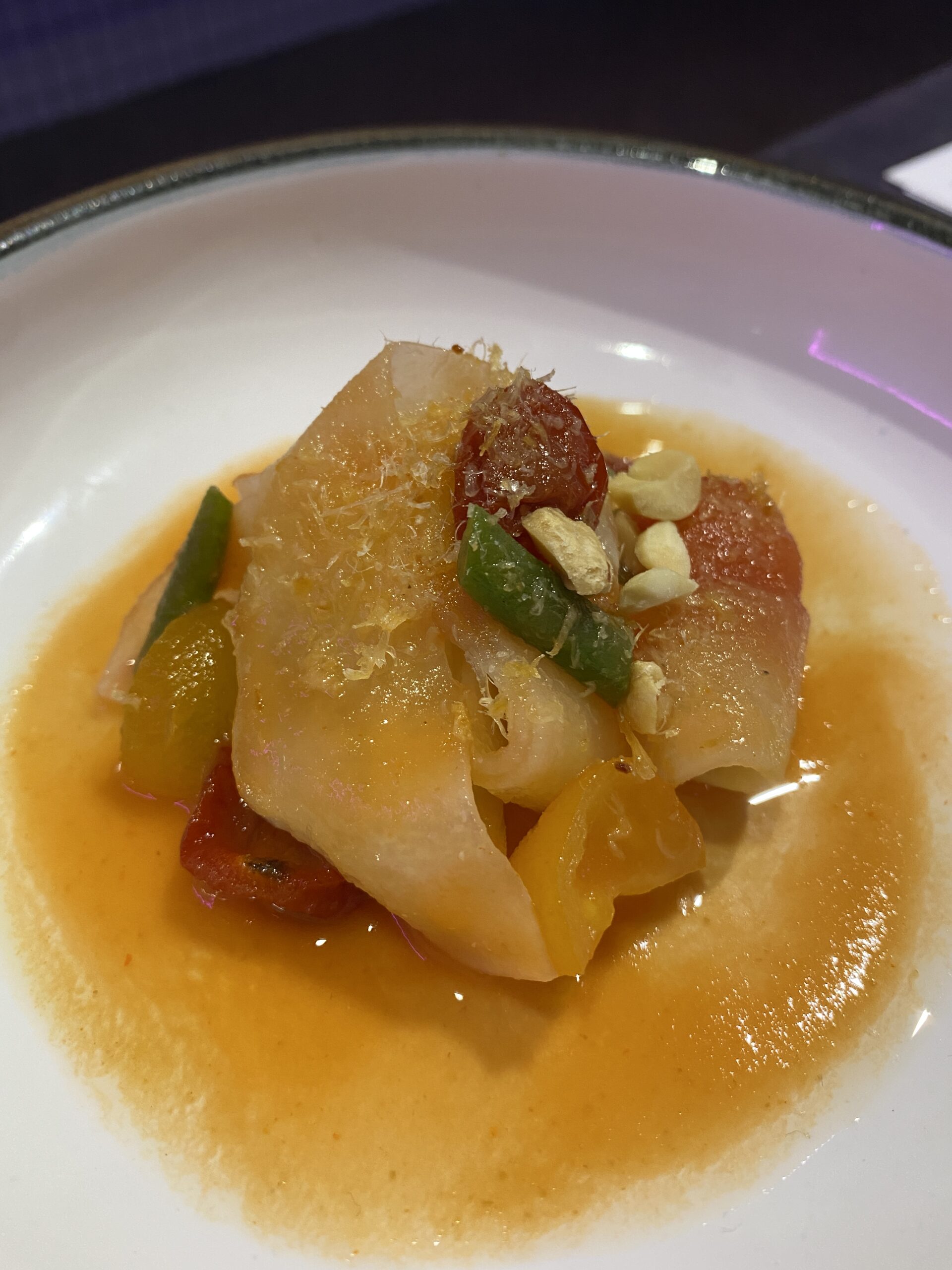 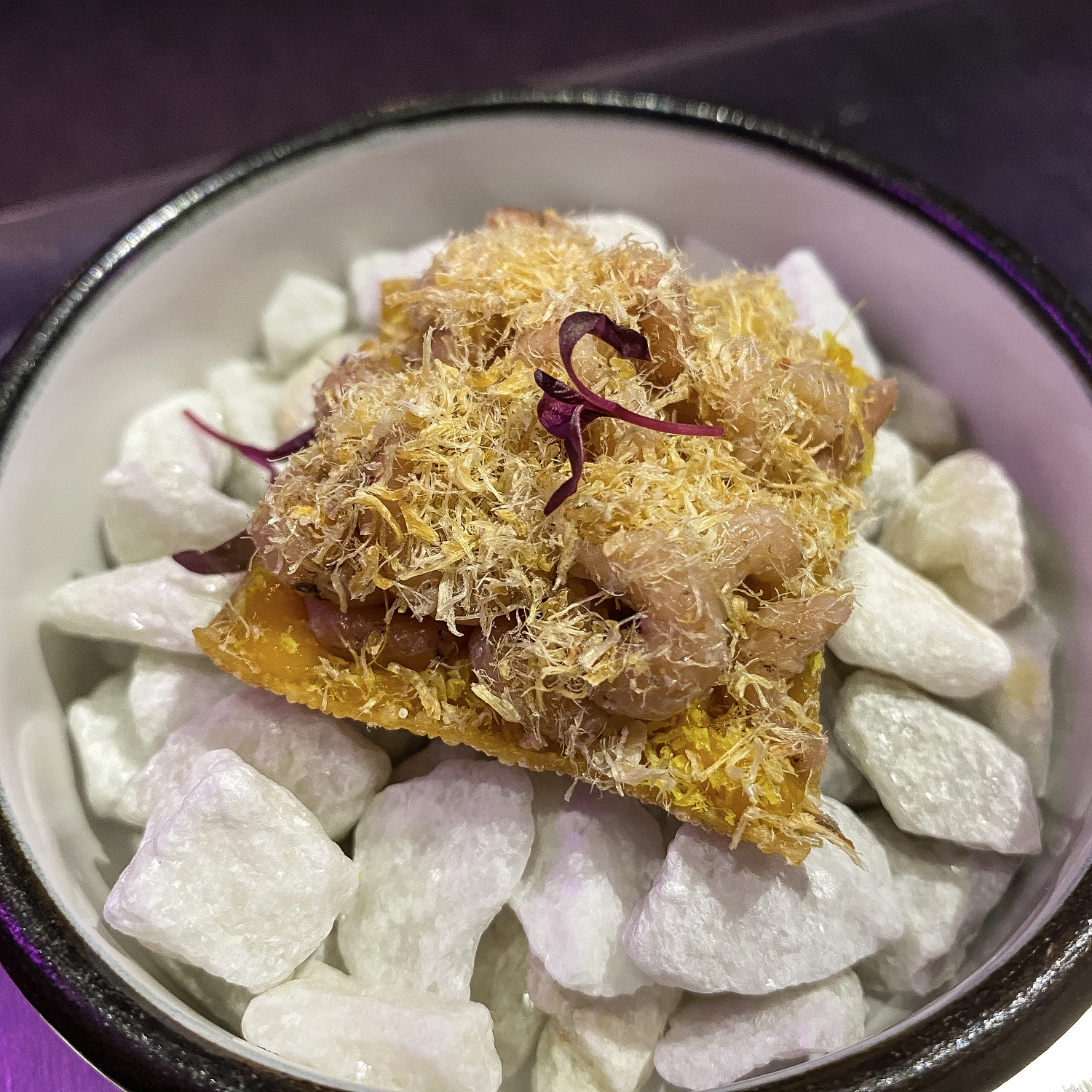 The classic Thai dish uses raw papaya to provide crunch, adds tomatoes for umami, sweetness and depth, peanuts for more salt, chillis for heat, and fish sauce to bring it all together. It’s a masterclass in design.

District’s interpretation is just as humble, and excels in all those dimensions. Kohlrabi, grated into ribbons, provides the crunchy base, the tomatoes are candied for additional texture. The sauce, however, avoiding the watery-tendency of traditional som tum, is reduced to a syrup, thick enough to coat the back of a spoon. It’s like nectar, and it’s a very welcomed tweak on a classic, close enough to pay homage to its origins, just modern enough to be affirmative. 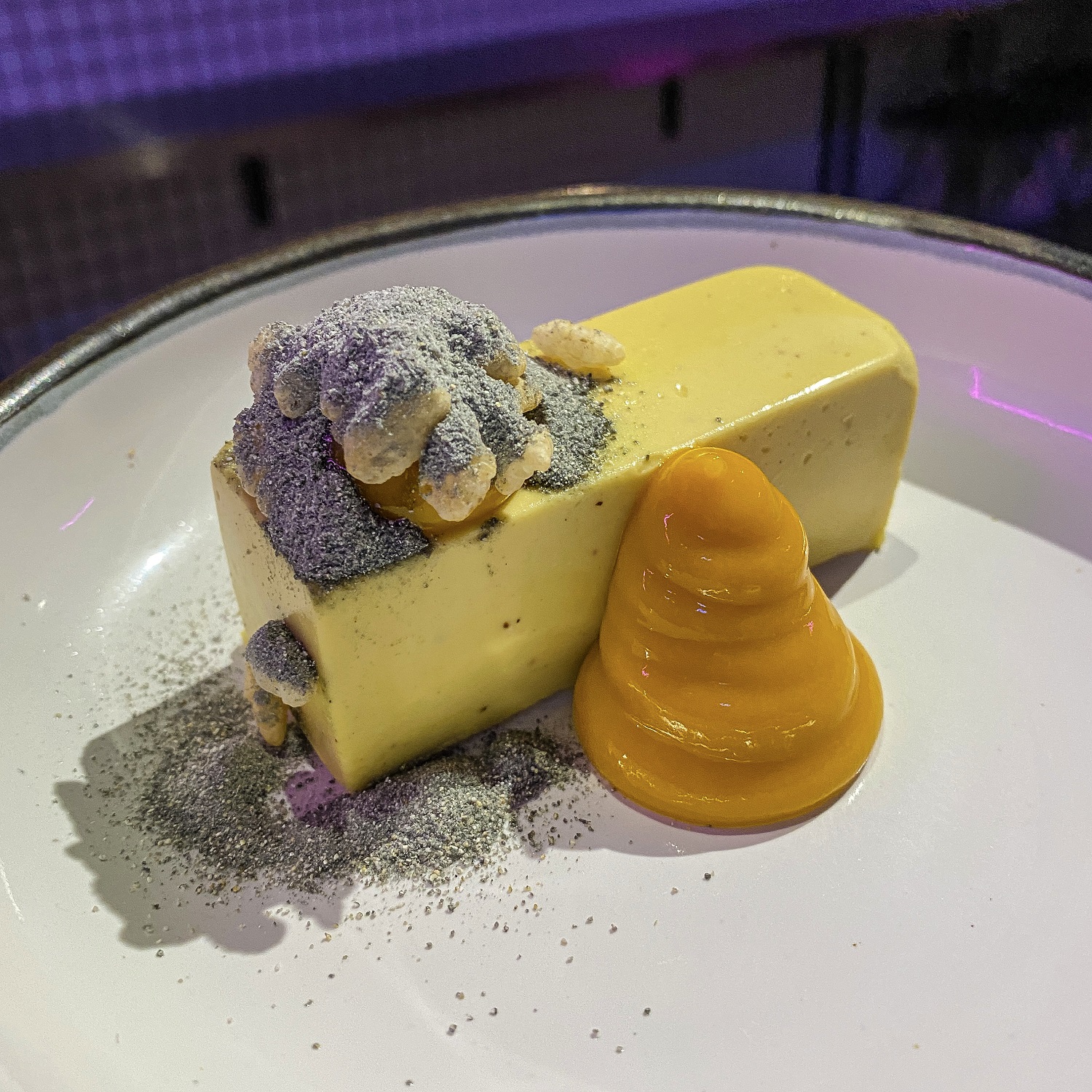 ‘It was only a dream’ // Caramelised coconut, mango, puffed rice

The final dish, dessert, is essentially the inside of a Portuguese pastel de nata, flavoured with mango, whilst retaining the light wobble. It’s a really genius interpretation of the Thai love of mango.

The drinks menu, topped with the simple word, Liquid, is cohesive. District prides itself on liquid intelligence, meaning that the drinks menu is well thought out, considered. 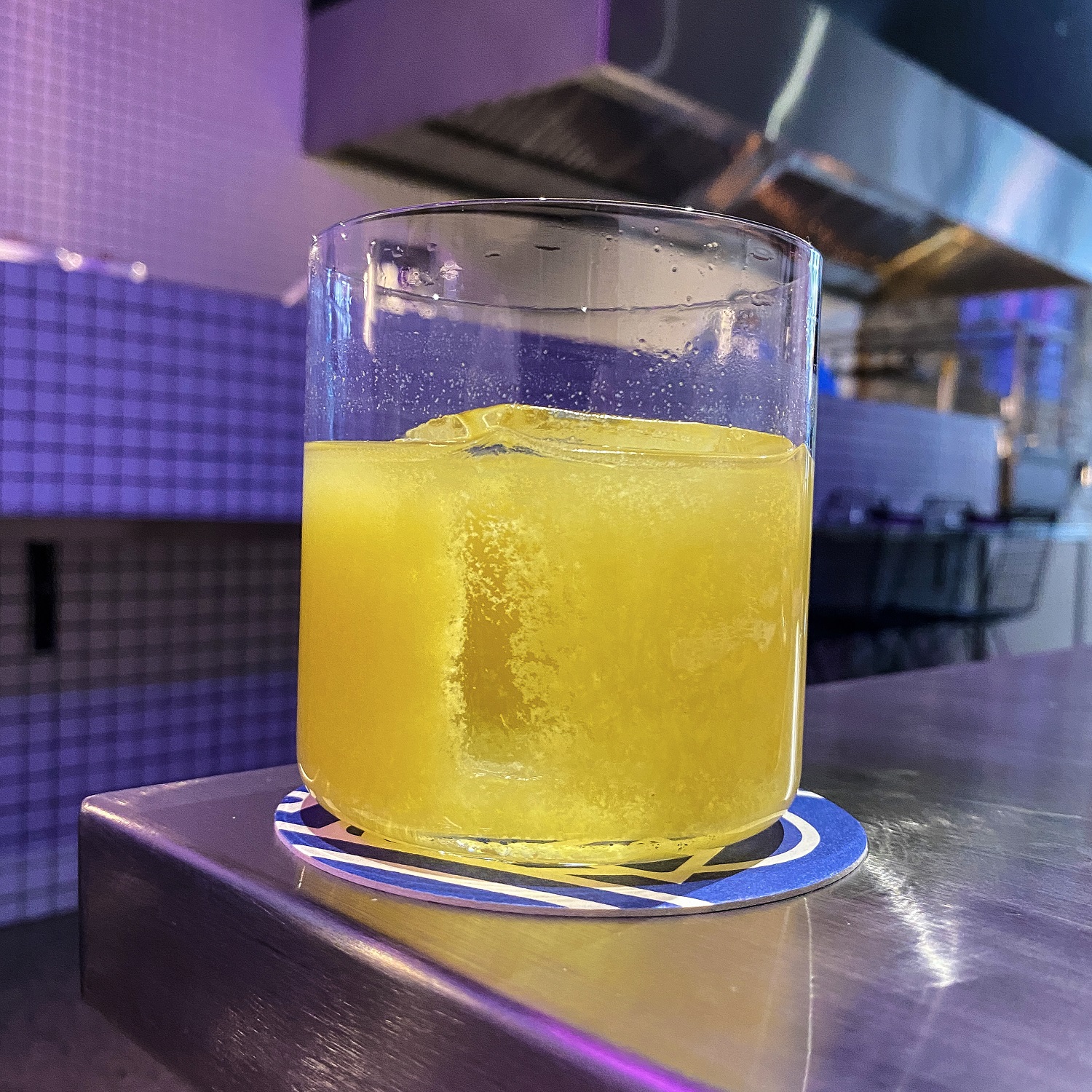 The menu is unified by common themes, items used in the kitchen, ingredients touched with the same careful barbeque hand; think charred banana, coriander infusions, the mingling of intense savoury with the right amount of sweet offset.

On top of clever cocktails, there’s a small selection of solid wines, a simple orange, and a great pet nat that compliments the spice of the dishes very well. 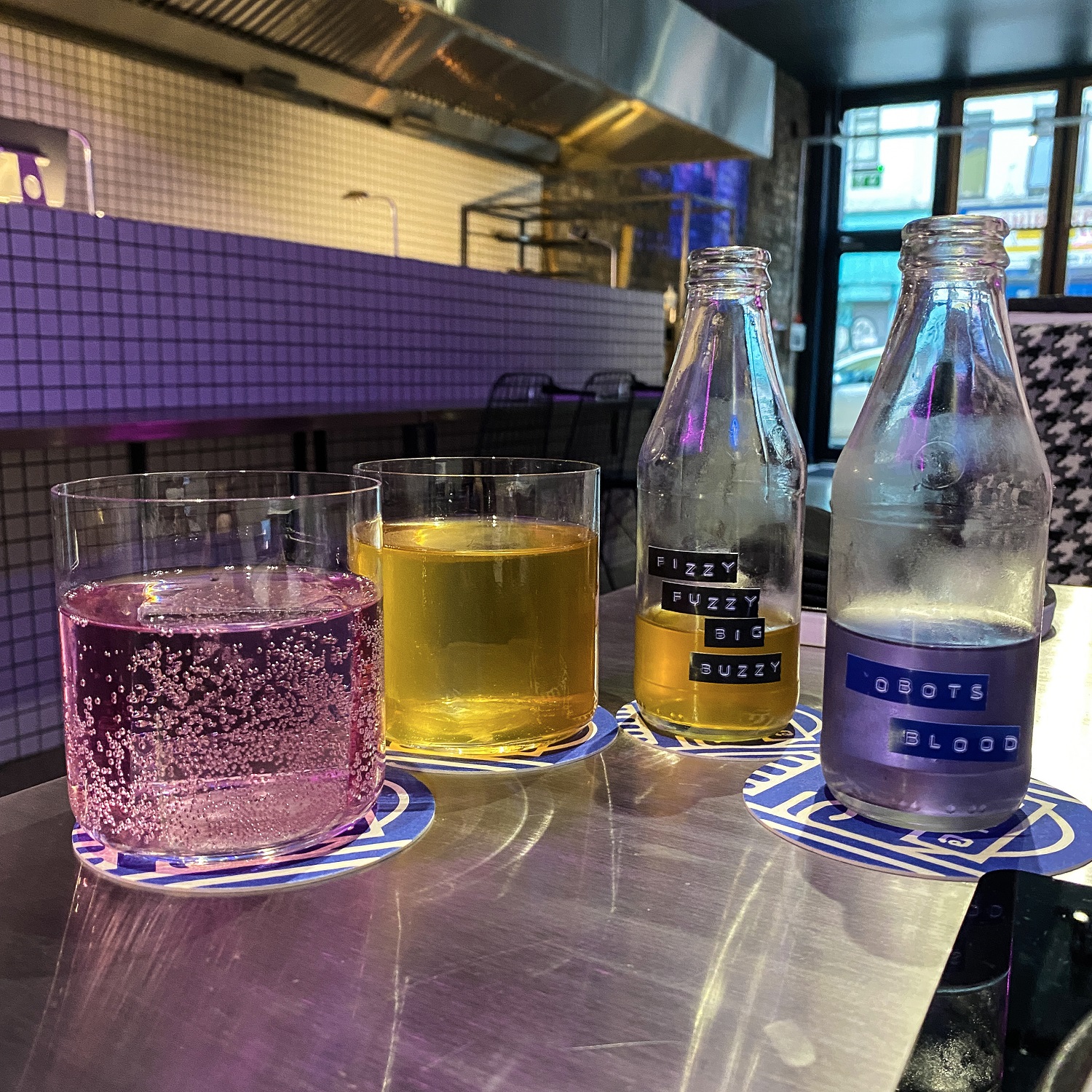 It’s a confident addition to Manchester. The full menu took about three hours, a welcomed change to rushed services that characterise the almost-post-COVID hospitality industry. The service was casual, the food serious.

District’s booking portal promises that “all moments will be lost in time, like tears in the rain”, and as the evening went on, the wine flowed and dishes kept coming, I was sad to leave.