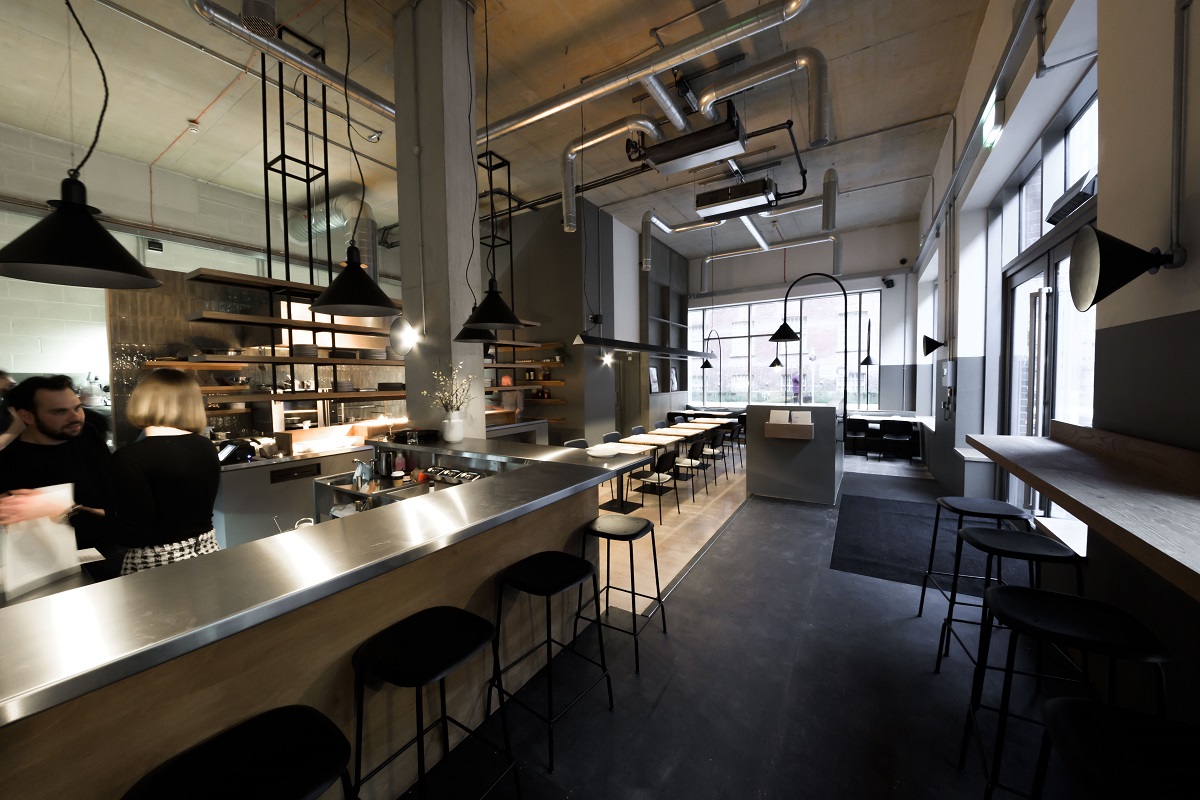 I’ve never really experience nationwide recognition, and if I’m being honest – it’s highly unlikely to ever happen. In fact, the only time I’ve ever been in a newspaper was a brief piece back in 1996 when I managed to collect more Tesco Computer Vouchers than anyone else in Oldham – and the Chronicle came knocking.

I can only imagine Patrick Withington’s delight then when he opened up The Observer on Sunday, perhaps sat at his kitchen table with a brew and a bacon butty, only to discover that he’d been included in renowned food writer Jay Rayner’s pick of food “rising stars for 2002”. 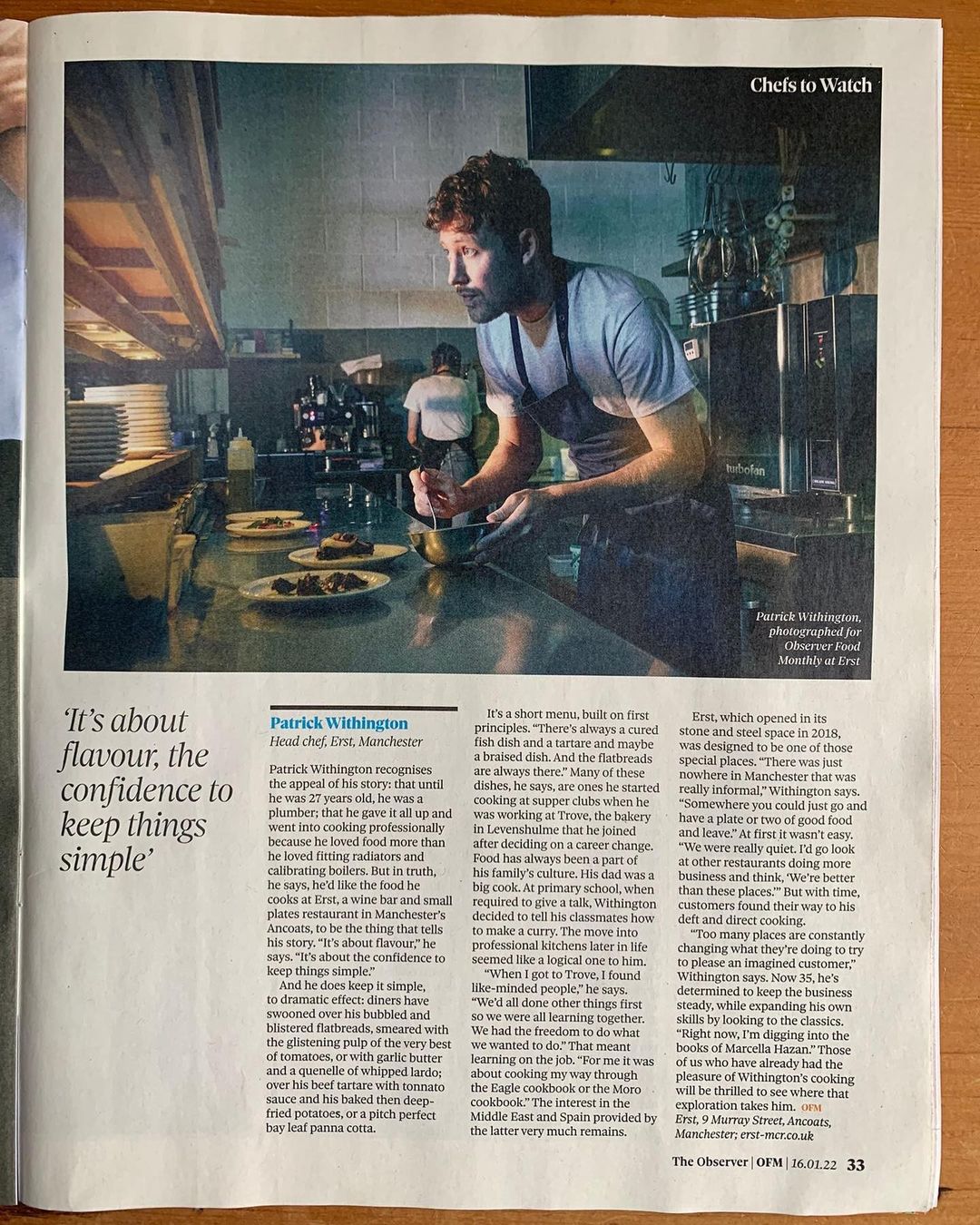 Billed as “six chefs whose careers you should follow this year”, Patrick’s current tenure at ERST in Ancoats is one that’s seemingly been closely followed by Rayner, who reviewed the eatery back in September and proclaimed it to be “one of the best meals of the year.”

Patrick is an ex-plumber, a man who was fitting bogs and kitchen taps until he decided to pursue a career in cooking professionally at the age of 27. He soon joined TROVE in Levenshulme, started cooking dishes for regular supper clubs, before heading up Erst when it opened in Ancoats. 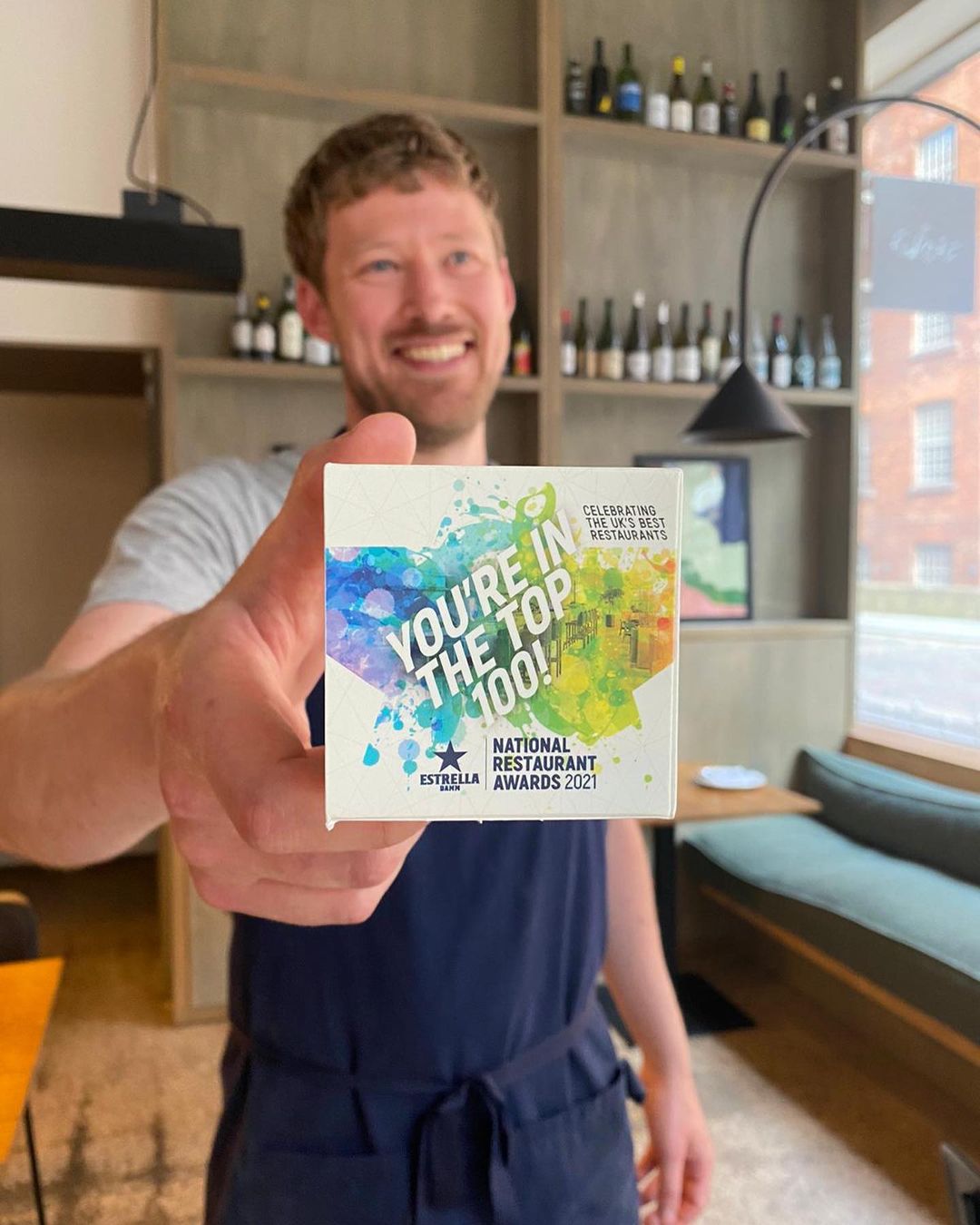 Rayner finds Withington’s simple approach enthralling, and his confidence infectious. He explains how “diners have swooned over his bubbled and blistered flatbreads, smeared with the glistening pulp of the very best of tomatoes, or with garlic butter and a quenelle of whipped lardo; over his beef tartare with tonnato sauce and his baked, then deep-fried potatoes, bursting lasciviously from their skins, or a pitch perfect bay leaf panna cotta.”

Since opening in 2018, Erst has continued to grow and become a force to be reckoned with within the city. Patrick explains how at the beginning “We were really quiet…” but, Rayner notes that “with time, customers found their way to his deft and direct cooking”. 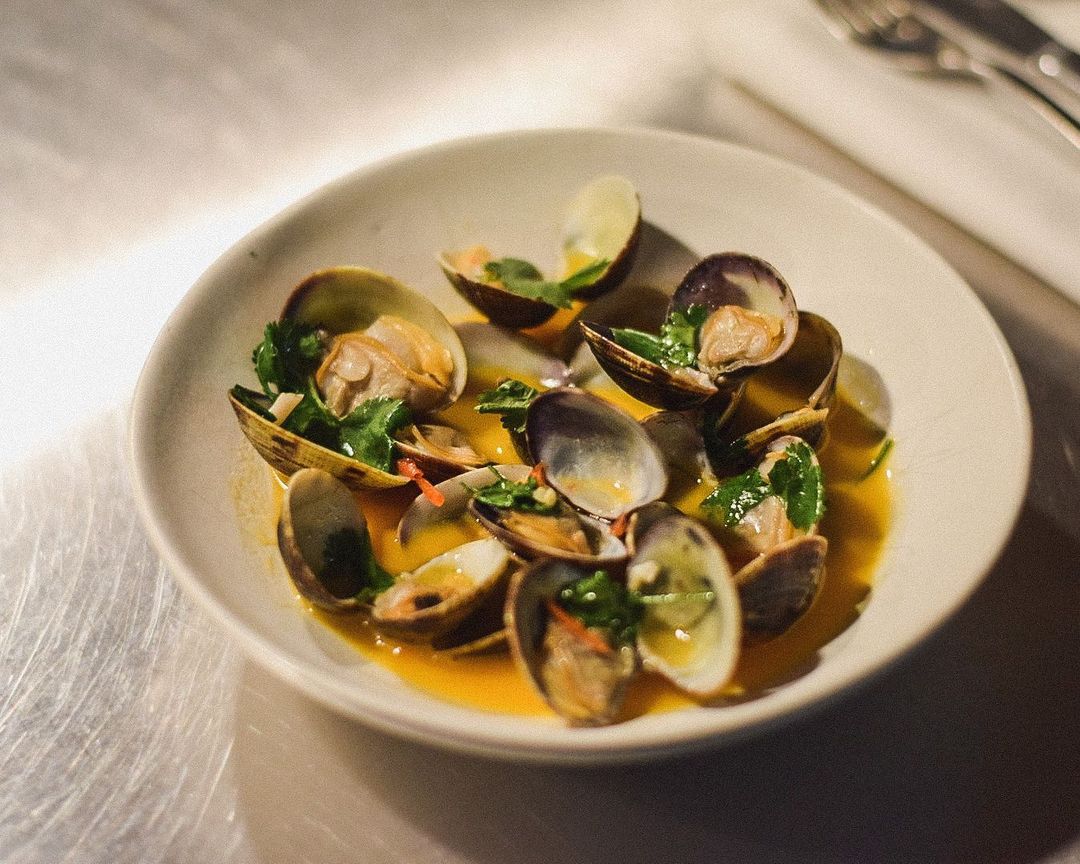 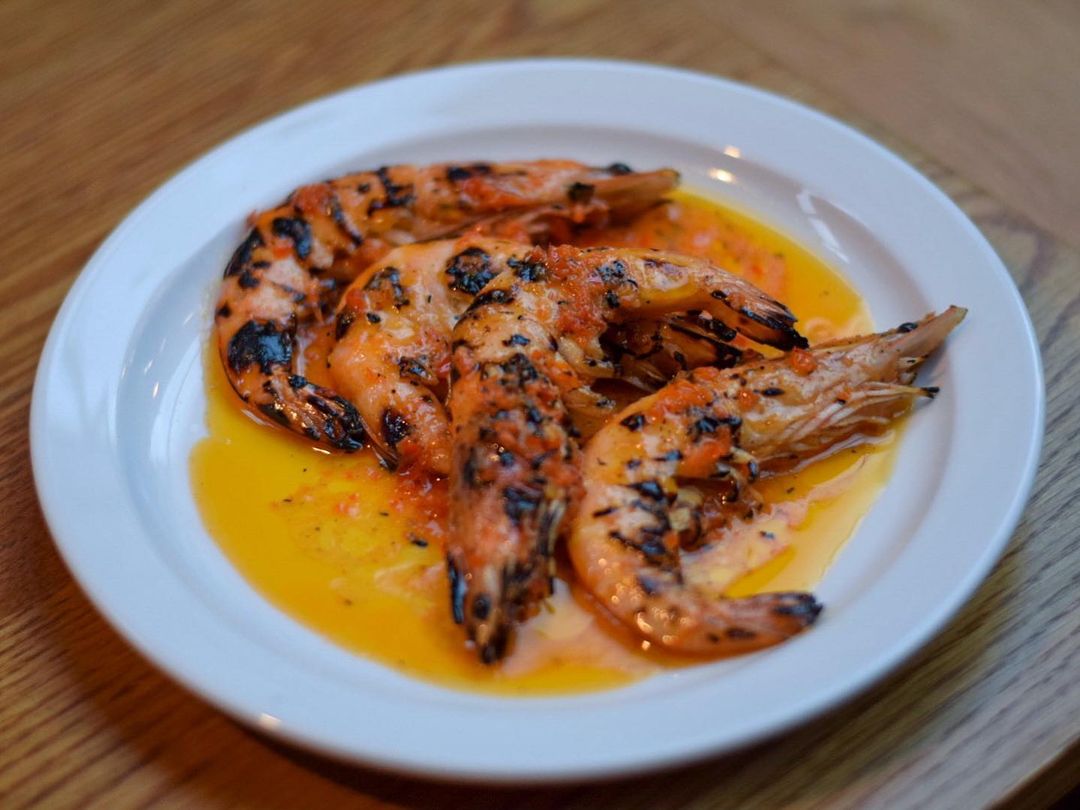 As things continue to grow for Erst, so too does Patrick’s skill and determination, as he continues to look to “expand his own culinary horizons and skills by looking to the classics”, with a particular focus on Marcella Hazan – world-renowned writer who is credited with introducing the public to the techniques of traditional Italian cooking, and considered by chefs to be the world’s most respected woman in Italian cuisine.

Rayner finishes by noting “Those of us who have already had the pleasure of Withington’s cooking will be thrilled to see where that exploration takes him.” 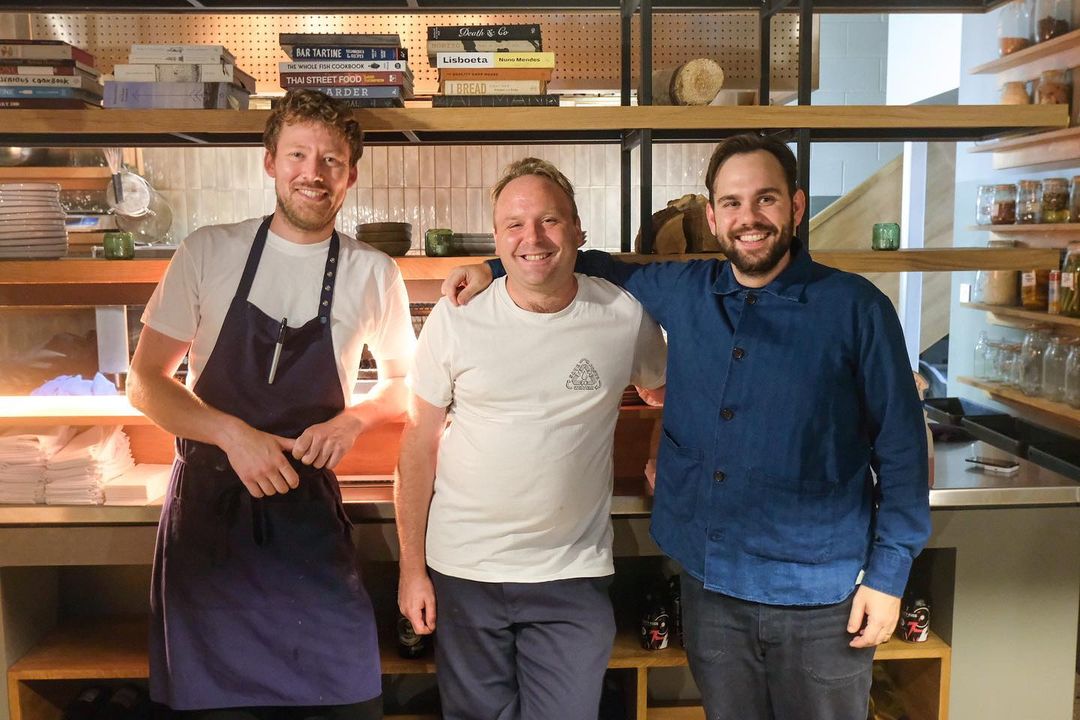