We stopped off at New Wave Ramen’s first kitchen takeover from Cardiff’s Matsudai Ramen. Big bowls, progressive noodles. We’re excited for the next in the series. 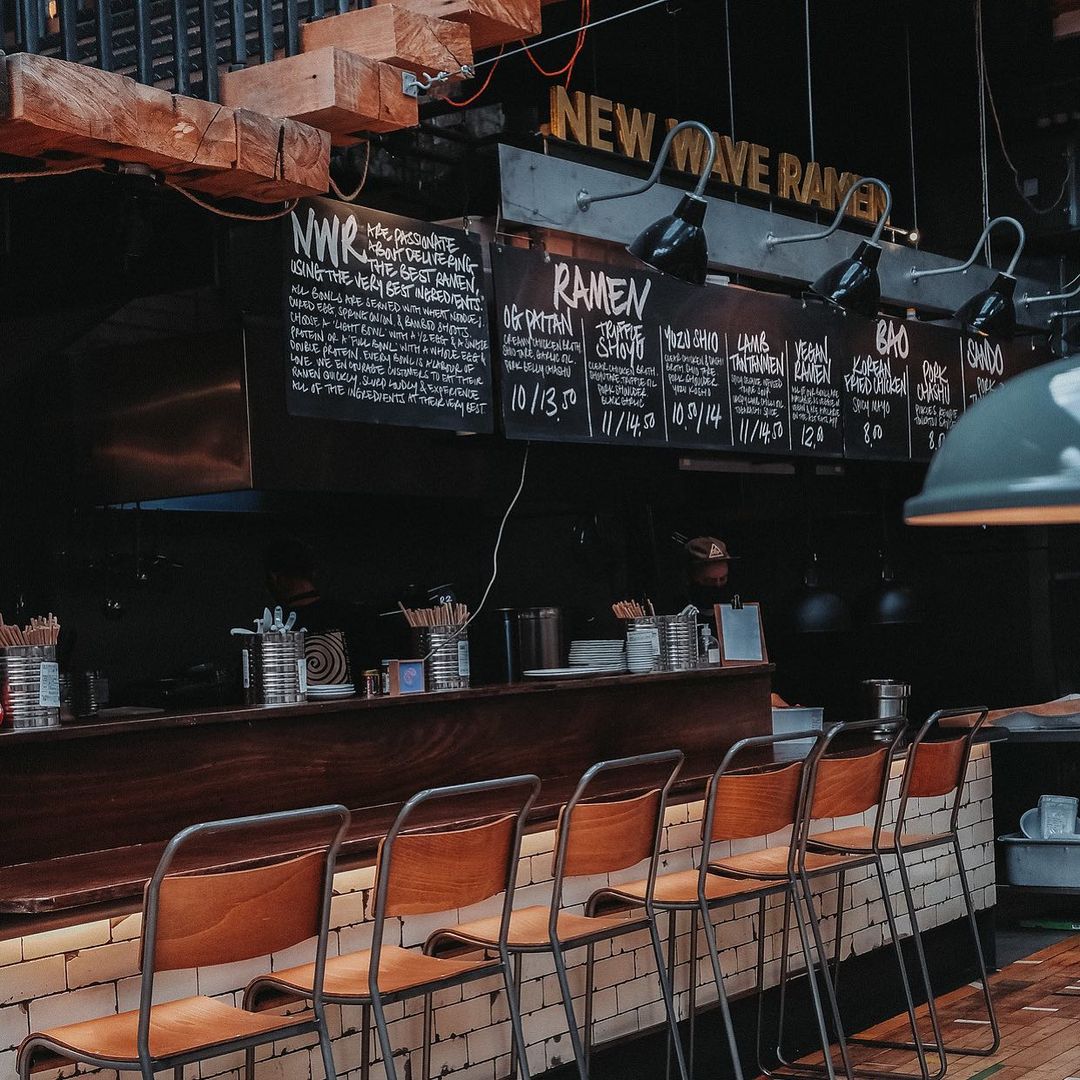 Mackie Major’s New Wave Ramen created a stir in the city last July. First of all, the Northern Quarter itself has at least three independent ramen restaurants, which means competition is difficult.

Secondly, many people are already loyal to their favourites. But New Wave Ramen did something different: named after a style of ramen that has been popularised in Tokyo and the US over the past few years, New Wave Ramen tapped into a pre-existing community of ramen-lovers. New Wave is a style, predominantly made with chicken broth (as opposed to traditional ramen’s preference to pork) that has come to encapsulate the future direction of ramen. 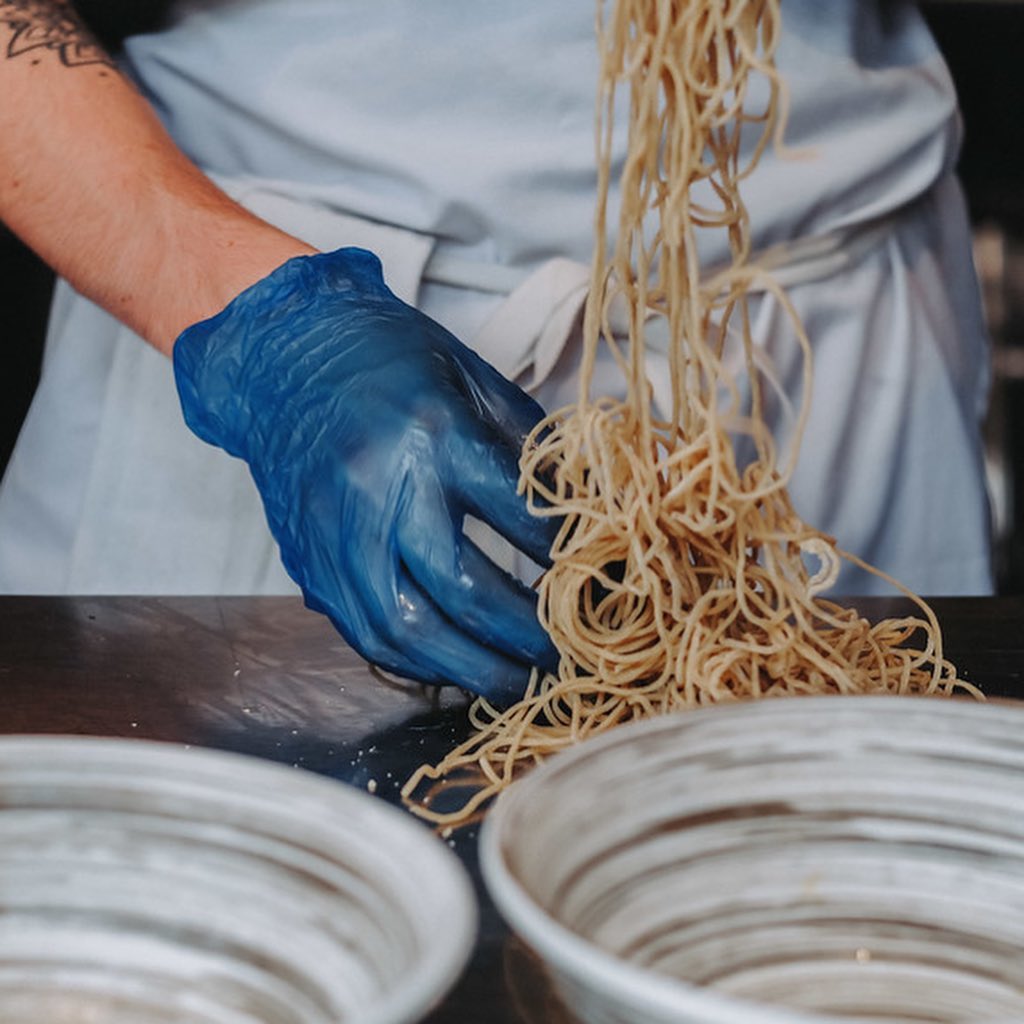 Young chefs, the apprentices of old masters and the next generation are looking to push the field of ramen even further. As a consequence, there’s a whole group of ramen shops and pop-ups that are taking their attempts seriously and creating vehicles for new wave style ramen outside of Japan. Our New Wave Ramen is one of those, and everyone they’ve invited to take over their kitchen is just as forward thinking.

The New Wave Ramen Takeover Series started in June with Wales’ Matsudai. Influenced by the transparent online ramen community, where sharing things like noodle hydration levels, recipes and techniques has become its own culture, Matsudai was founded with the intention of bringing proper new wave US-influenced ramen to UK shores.

Head Chef James Chant cites three chefs as main influences. Firstly, Ivan Orkin, a ramen-hall-of-famer whose success story of being an American running a ramen-ya in Tokyo is nothing short of awe-inducing – and you can watch it on Netflix’s brilliant Chef’s Table. 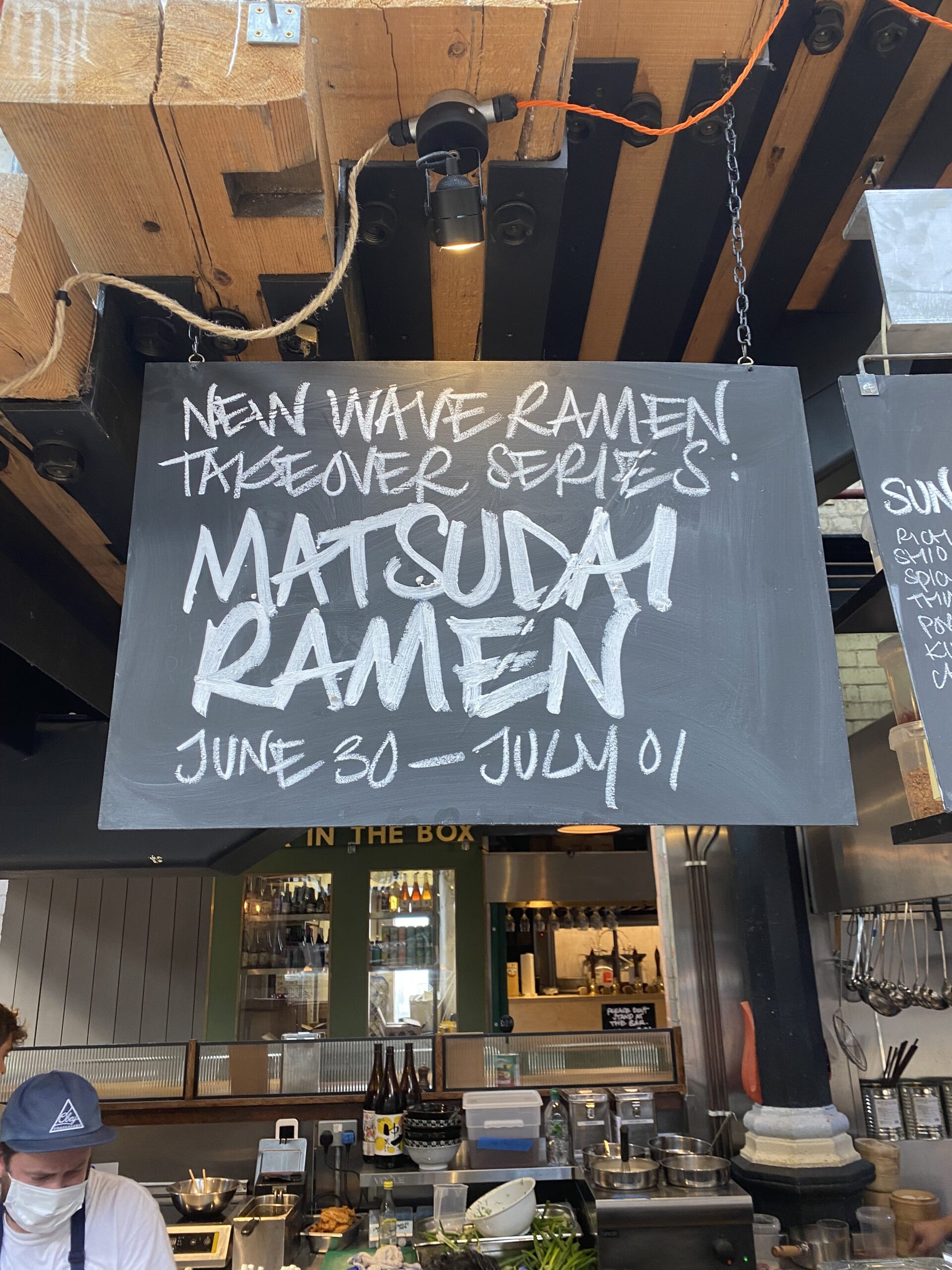 Next, Mike Satinover: ramen’s Reddit-hero who took to the internet to write recipes and educate an entire community of ramen-lovers online. Lastly, Keizo Shimamoto, a second-gen American-Japanese ramen chef who chronicled a tour of ramen bowls in Japan via a cult-blog in the late 2000’s, and then subsequently used it to chronicle his progression from amateur enthusiast to pioneer.

In 2021, these three are considered by many to be some of the most forward-thinking ramen chefs outside of Japan. Matsudai is continuing that lineage – in Wales, and now in Manchester.

The difficult thing about eating ramen on a humid July mid-afternoon is that ramen is always sweaty work. We tried to mediate this by sitting outside, where the breeze could blow and cool our foreheads. 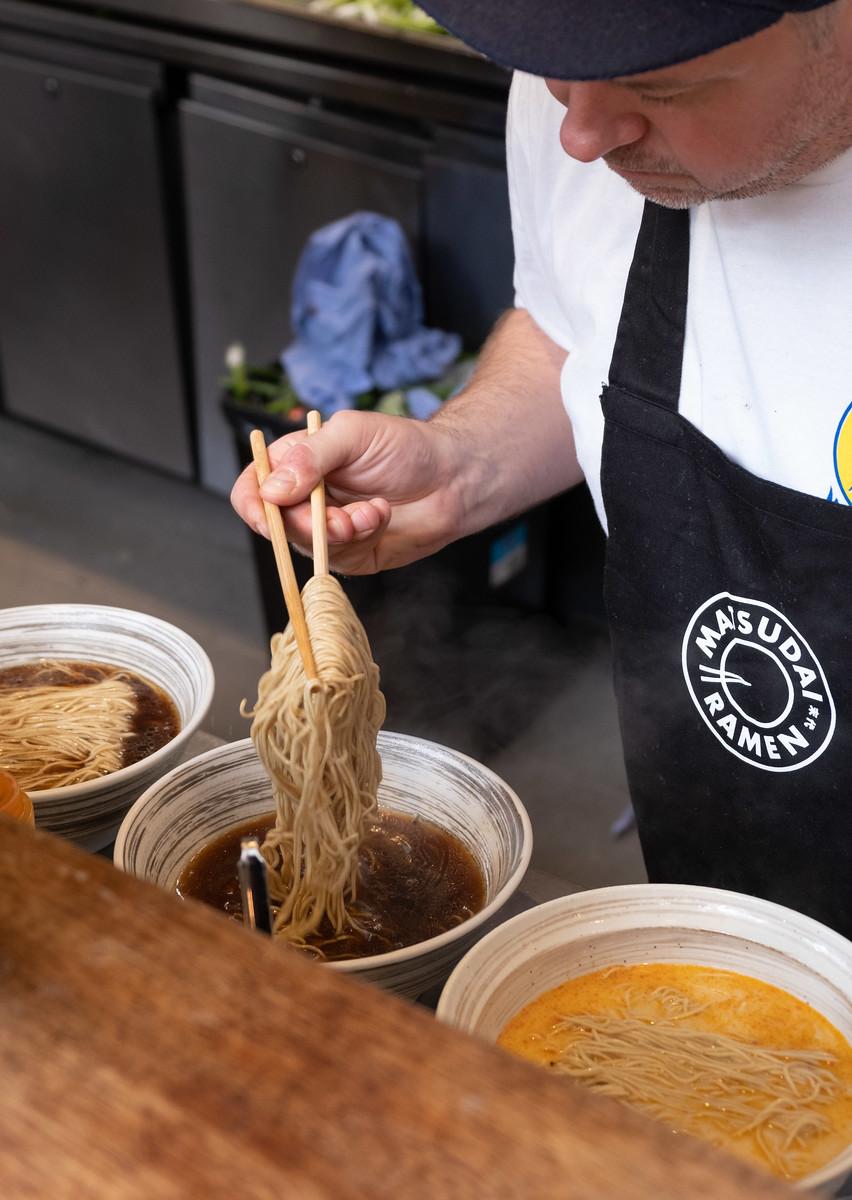 There’s a couple of spots outside Mackie Mayor where the sun graces the seats and the cool summer’s air is welcomed. We sat down for a moment before realising we could sit inside at the ramen bar – a far more rounded experience, where we could annoy the chefs with questions like: is this karaage your own recipe? Or, how exactly do you make your tonkotsu? Femur bones? Neck? Back fat?

It’s hotter inside, however, although at least at the ramen bar there’s a solidarity you share with your chef as you swap glances from bowl to kitchen, both of you dabbing yourself with napkins or blue roll, trying to figure out what the other’s thinking. 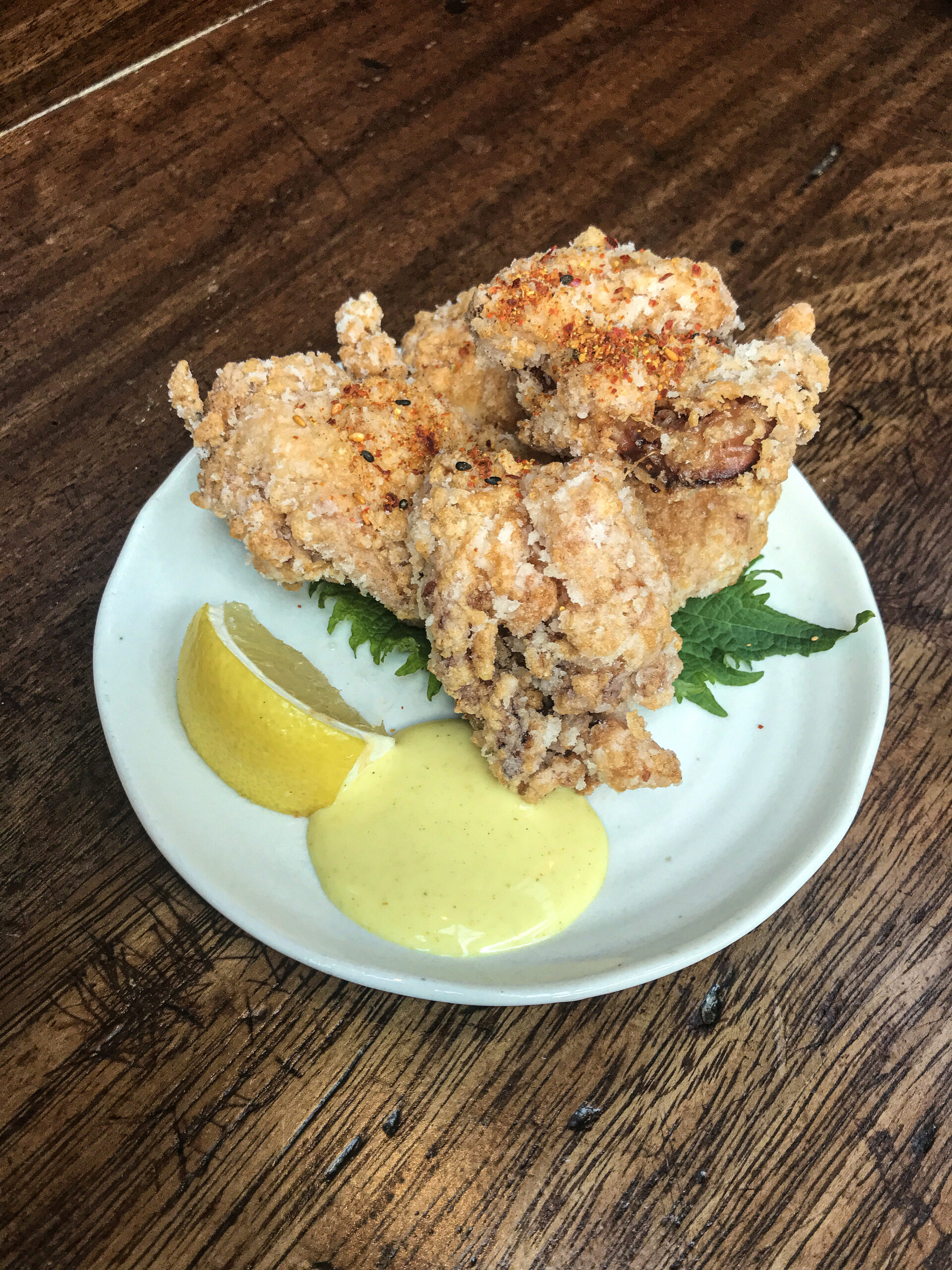 “The karaage arrives and it’s delicious.”

We sat down inside and ordered. Karaage, a couple ramens. Mali ordered a Sunset Red, myself a Hakata. The sunset is essentially a tonkotsu ramen with chilli oil, and when it comes to tonkotsu I’m a bit of a purist – yes, I like my shin ramen spicy, but that’s a different story. For me, tonkotsu should be creamy and porky. So hold the spice, please.

It’s worth noting that both the ramens are built around a shio tare. For the non-ramen initiated, the tare is basically the neat adulterant that takes a broth in different directions. Shio is often contrasted with shoyu, which is a catch-all for a tare that uses soy sauce. Anyway: the fact that neither of our ramen relied on shoyu is a testament to Matsudai Ramen’s skill. Shio is widely considered harder to use. 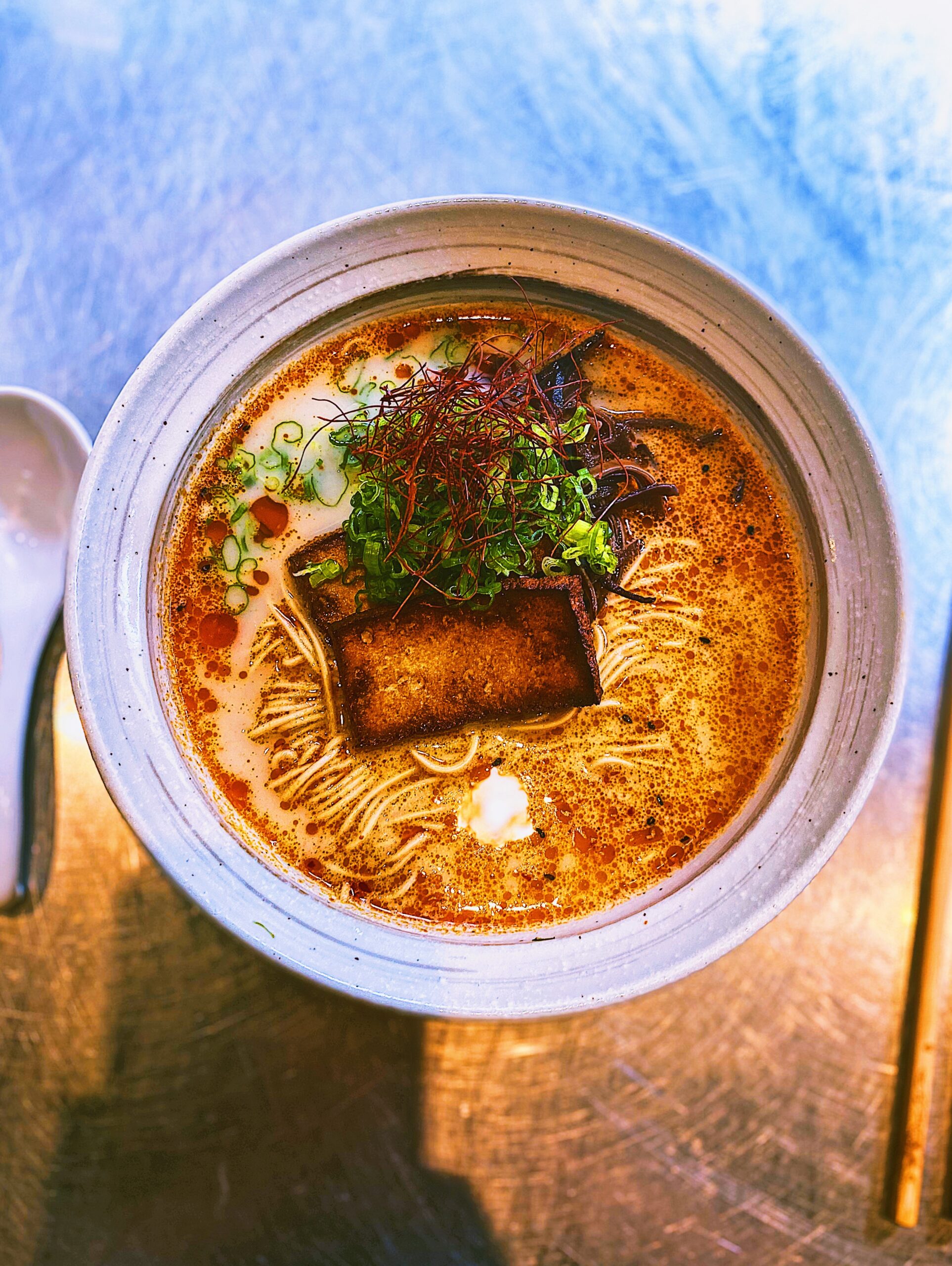 The karaage arrives and it’s delicious. Thin cornstarch coating. Shichimi togarashi to top it off with hints of citrusy-numbingness. The curry mayo is good, and the six pieces of thigh are served on top of a shiso leaf – one of the few I’ve seen outside of Japan. It’s a nice and rare touch. One of the chefs described it as slightly minty and cumin-y, which I agreed with, and it definitely helps to round off the look of the plate. A squirt of lemon, finger food. It’s juicy and crispy.

The ramen is excellent. The noodles, elegantly folded in the same direction like flowing waves, are made in house, and are satisfyingly chewy. 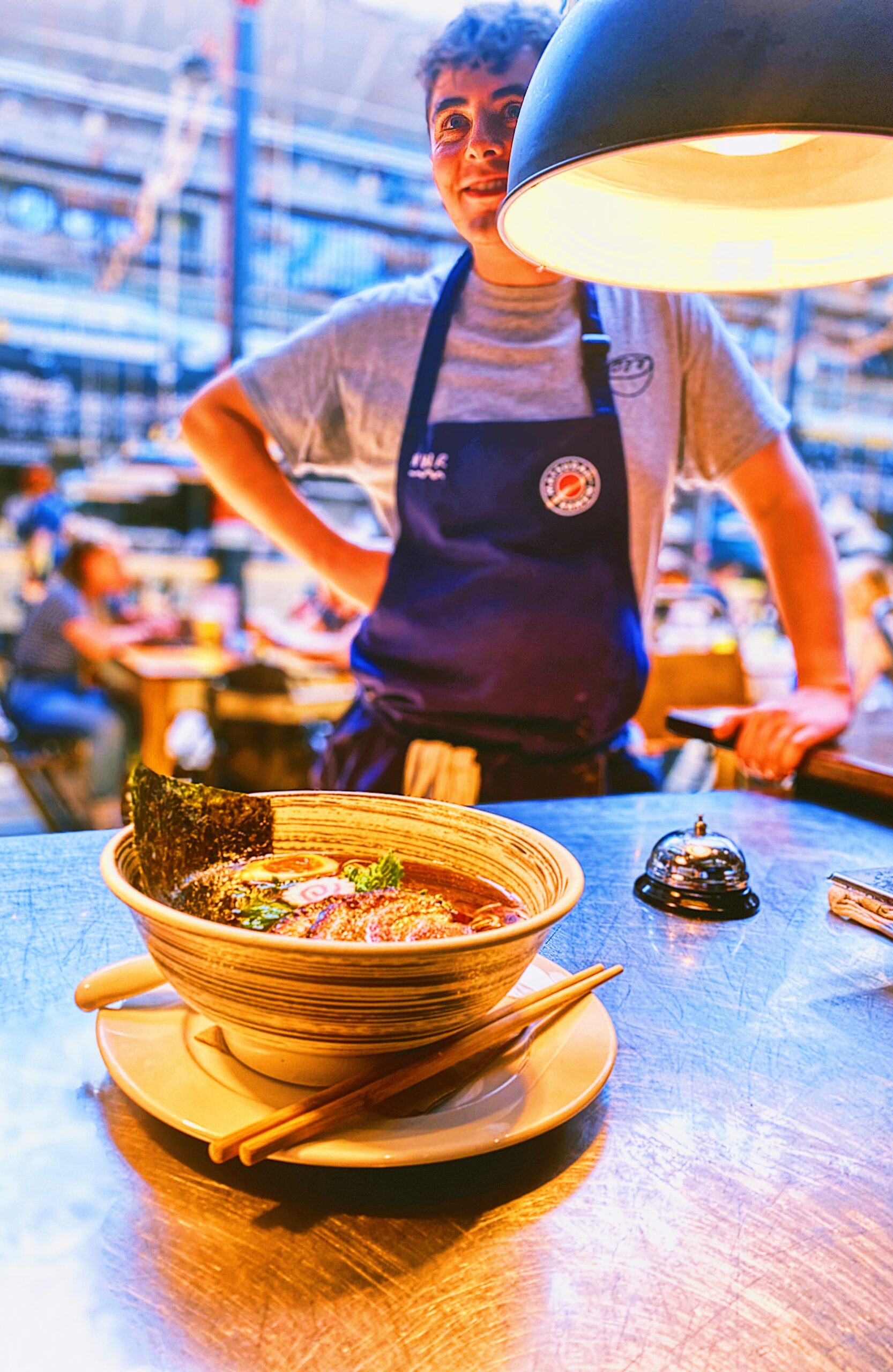 The first slurp of the broth makes me feel alive – if life and sustenance could be delivered through the 12 hour simmering of dead pig.

In a way, tonkotsu ramen is a really unappetising dish: if you’ve ever seen a cold tonkotsu stock, it isn’t nice. It’s jelly. Pork jelly. And the chefs spoon it into a pan and bring it to temperature in front of you. But god, it’s good. 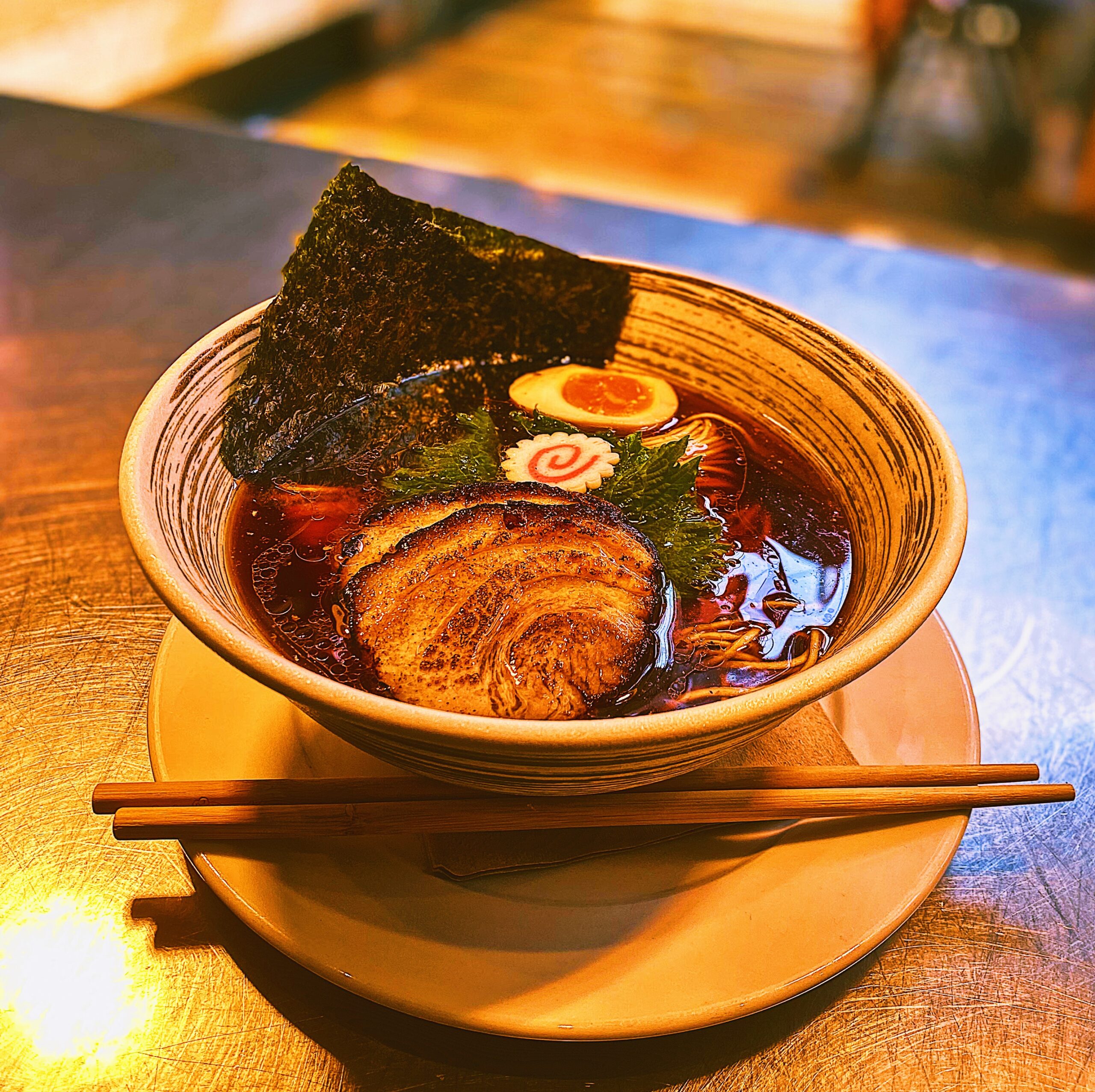 It hits those primal sort of urges that make you feel like it all makes sense, and leaves you with a sense of satisfaction that is second to none. A famous chef once told me (albeit over a reddit AMA), that hot noodles wait for no one. You have to eat them fast before they absorb too much of the broth and saturate, losing their chewy edge to the stodgy, bloated texture of pasta in minestrone (sorry, Italy).

But when ramen is this good, there’s no chance in hell that they have that much time in them. Mali and I both slurped our bowls until nothing remained and left feeling victorious. 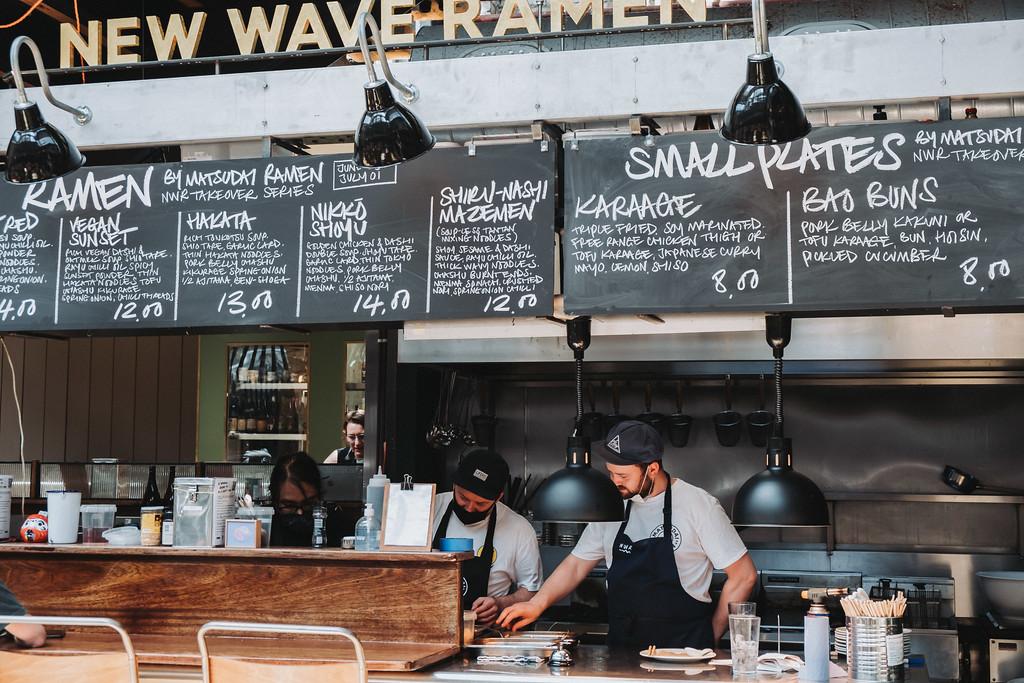 The Matsudai ramen takeover at Mackie Mayor was spectacular, and we’d welcome them back into the city with open arms.

The takeover series will run until August, with the kitchen being taken over every two weeks by a hopeful ramen-master. 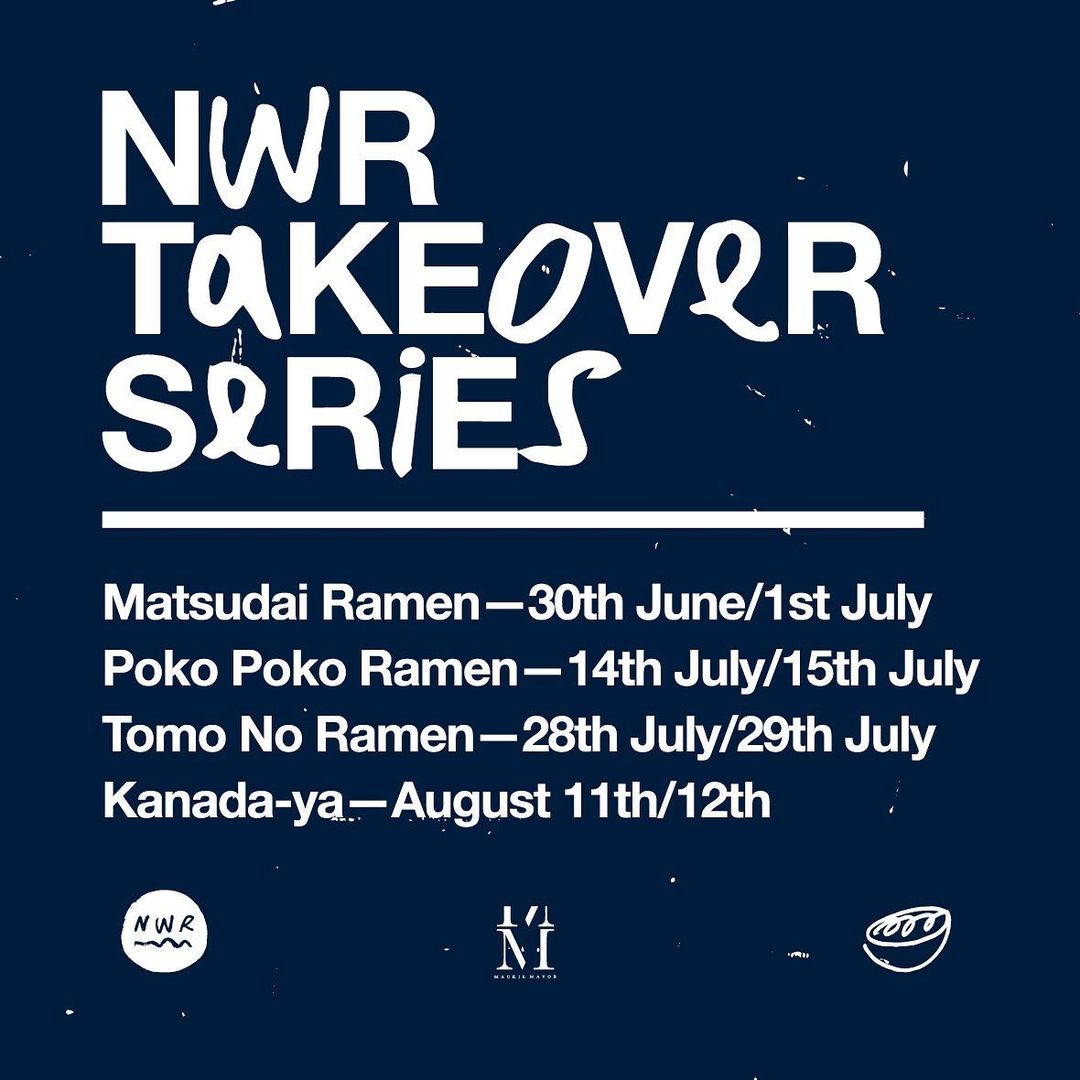 The whole calendar is available here. Bristol’s Tomo no Ramen, teasing progresive bowls like clam shoyu on their Instagram , will have their time to shine on the 28th and 29th July. London’s Kanada-ya, founded in 2009 and now with multiple sites all over London, will close the takeover series on the 11th August.

Fabaret! The Queer Theatre Spectacular coming to MIF this week