I've been on a bit of a taco frenzy recently - eating as many as possible in as many places as possible.

To be fair though it’s not been too much of a difficult task – they’re not available in too many places in the city so there’s not loads to choose from.

Fans of the classic crispy taco are in for a bit of a disappointing time though I’m afraid. Unless you want to go to Taco Bell – you’re shit out of luck. Perhaps just get a couple of Old El Paso kits, a bottle of Tequila and do it all at home?! 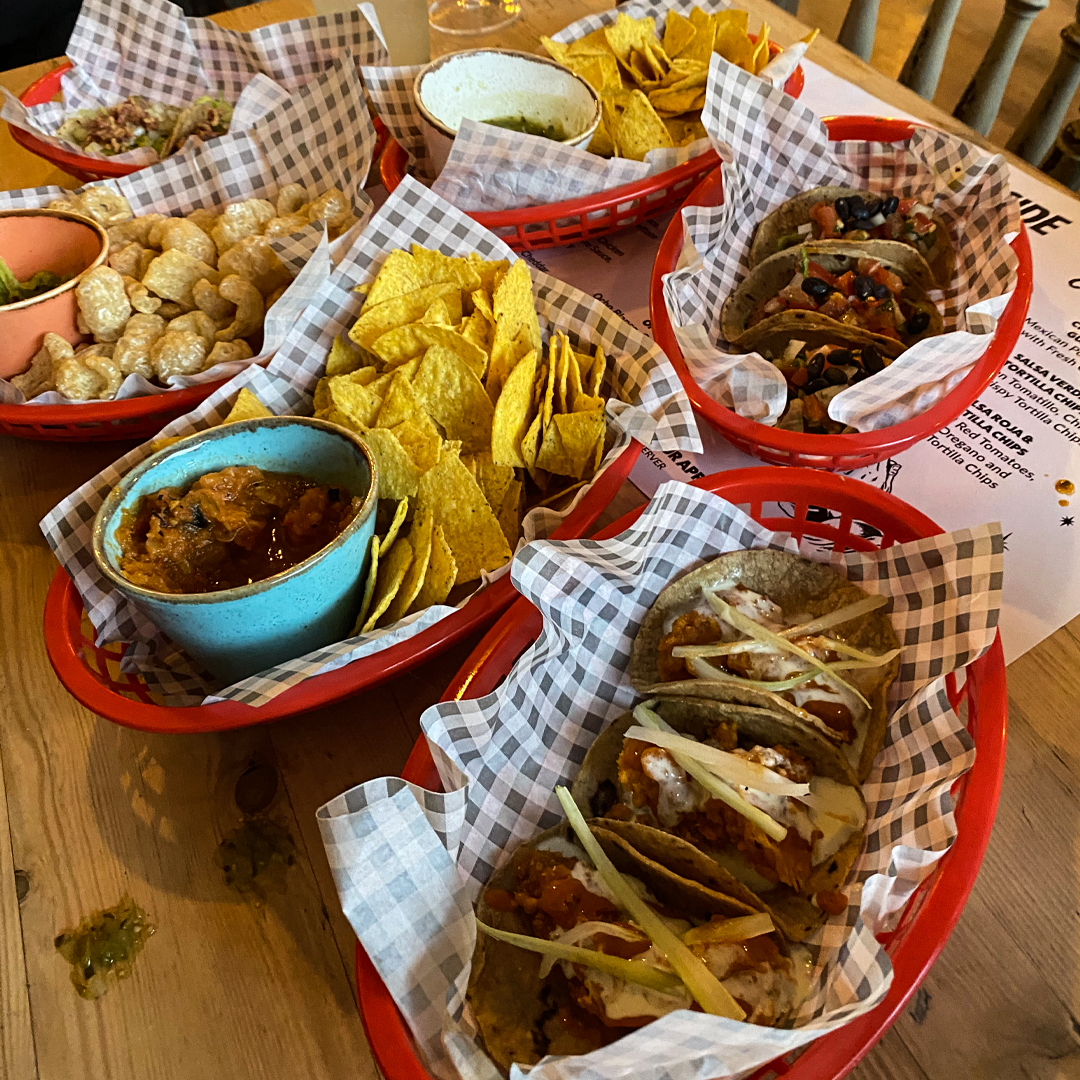 🌮🌮🌮🌮🌮
Redman Tacos
Southside Tequila Joint
Southside has only just opened, taking over the old Solomons site in Withington – but they’re already turning heads with their Tacos – which are actually a rather eclectic bunch indeed. Our most favourite was the Redman Tacos – a take on Buffalo Chicken with the ability to have a vegan option instead of the chicken. It’s our favourite mostly because of the Bunny Jackson’s Chicken and Buffalo Sauce – topped with blue cheese and sprinkled with celery. These are about as Mexican as Uncle Sam but who cares when they’re this good? Not us. 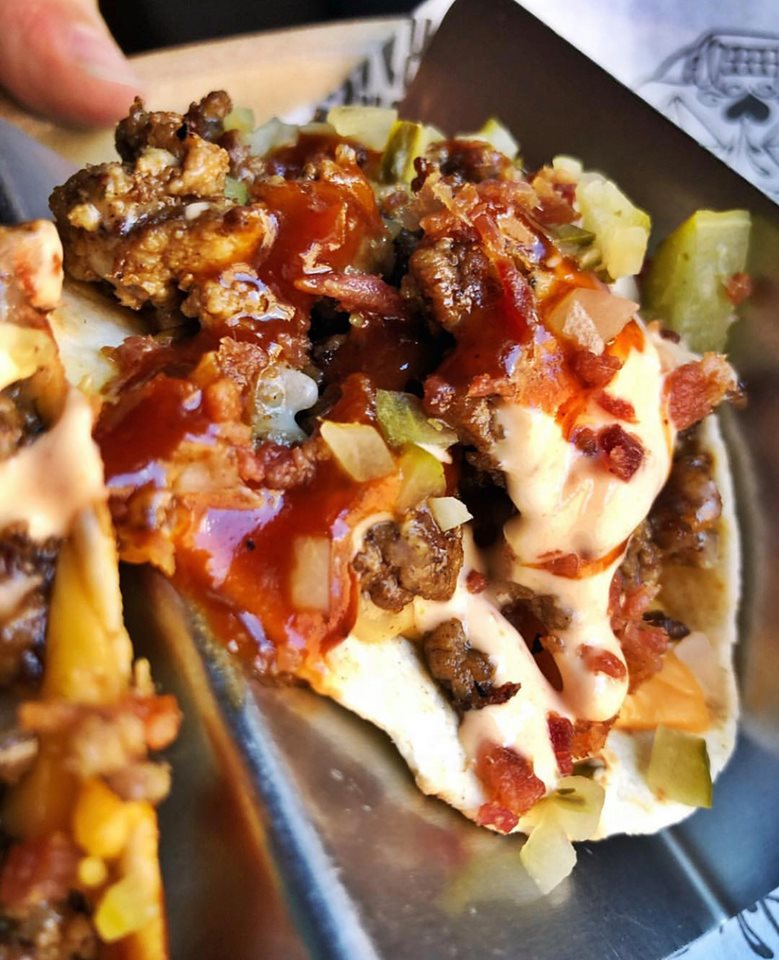 🌮🌮🌮🌮🌮🌮🌮🌮🌮
Cheeseburger Tacos
Luck, Lust, Liquor & Burn
Okay so these are about as Mexican as a middle class woman called Mavis who lives in Melton Mowbray with her 2 cats and her son Colin, but who cares when these tacos are so fucking filthy that you feel your toes tingling from the gout the second you lay eyes on them? Basically if you’re not sold straight away with the name of these things – there’s no point in you even bothering to try them. Crispy beef, cheddar, burger cheese, fries, bacon ketchup, chipotle sour cream, bacon rain, diced pickle and onion. That’s what’s on each one. Glorious. 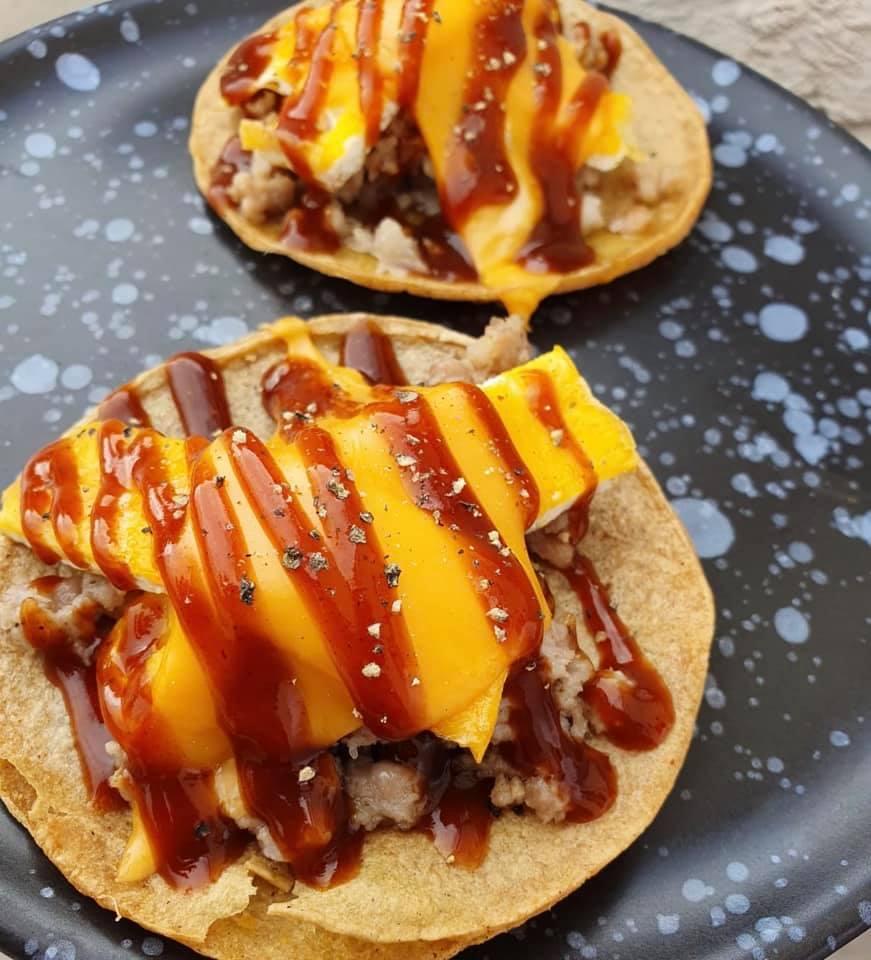 🌮🌮🌮🌮🌮🌮🌮🌮🌮🌮🌮🌮
Sausage and Egg McTaco
Wolf at the Door
Since shifting their focus towards Baos and Tacos – Wolf at the Door in the Northern Quarter has become one of the city’s best casual dining venues – somewhere you can crack on with the cocktails and beers and grab a few small bites while you’re at it. The Tacos are excellent, with a rather impressive range of ‘creative’ pairings. They’ve come up with the Sauage and Egg McTaco that has quite simply blown me away. There’s also an October special which includes onion bhajis and that just sounds incredible. 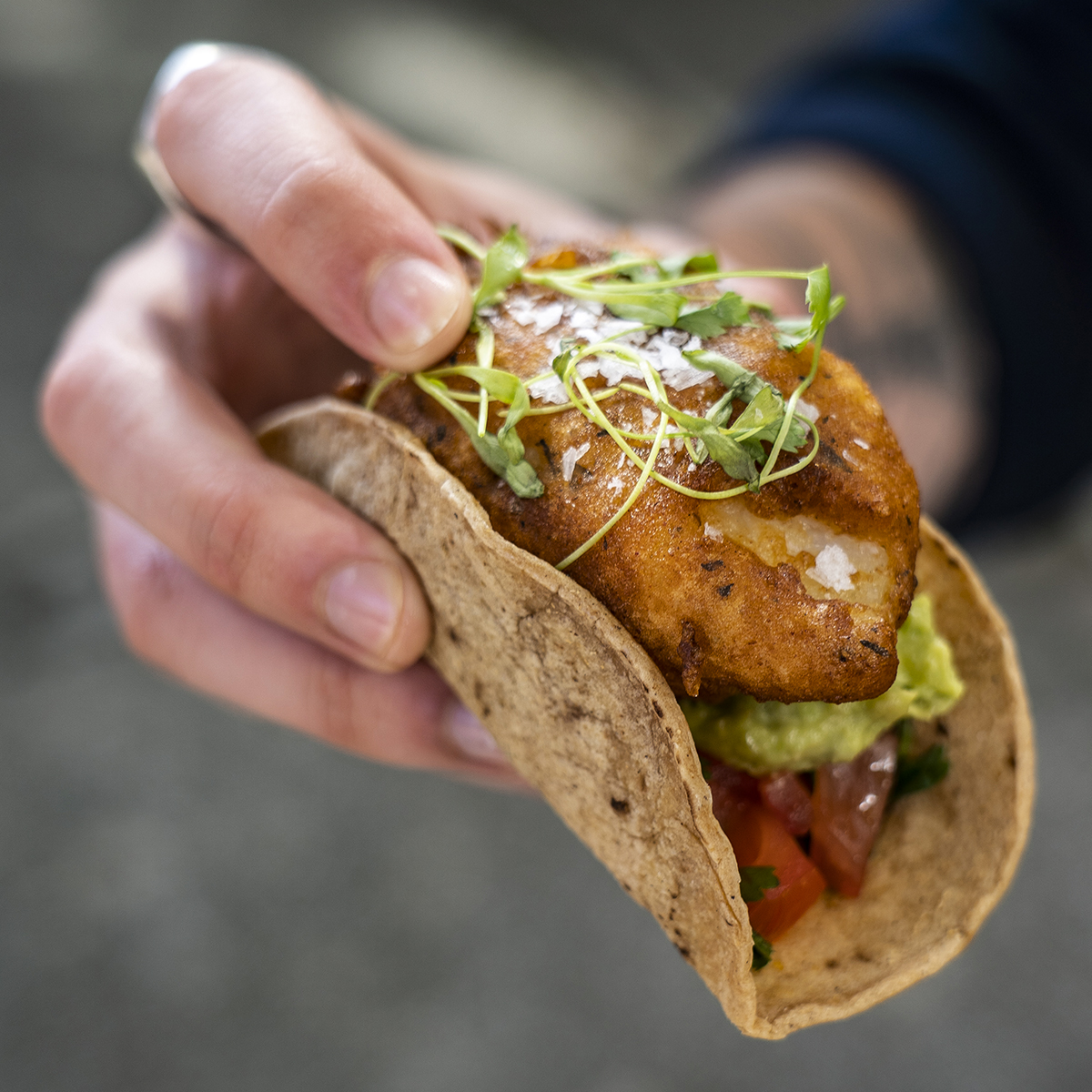 🌮🌮🌮🌮🌮🌮🌮🌮🌮🌮🌮🌮🌮🌮
Baja Fish Tacos
Rey Del Cerdo @ Hatch
Currently blasting out countless tacos over at Hatch, Rey Del Cerdo have also recently secured themselves a little pop-up over in Knutsford – so if you live down that end you’re soon to be in for a Mexican treat. Out of the 4 different tacos that I tried when I went down to Hatch last week it was pretty difficult to pick my favourite – but the classic Fish Taco just pipped it. A huge chunk of crispy battered cod, sitting on some spicy homemade guacamole and wrapped in a proper corn tortilla? Perfection. 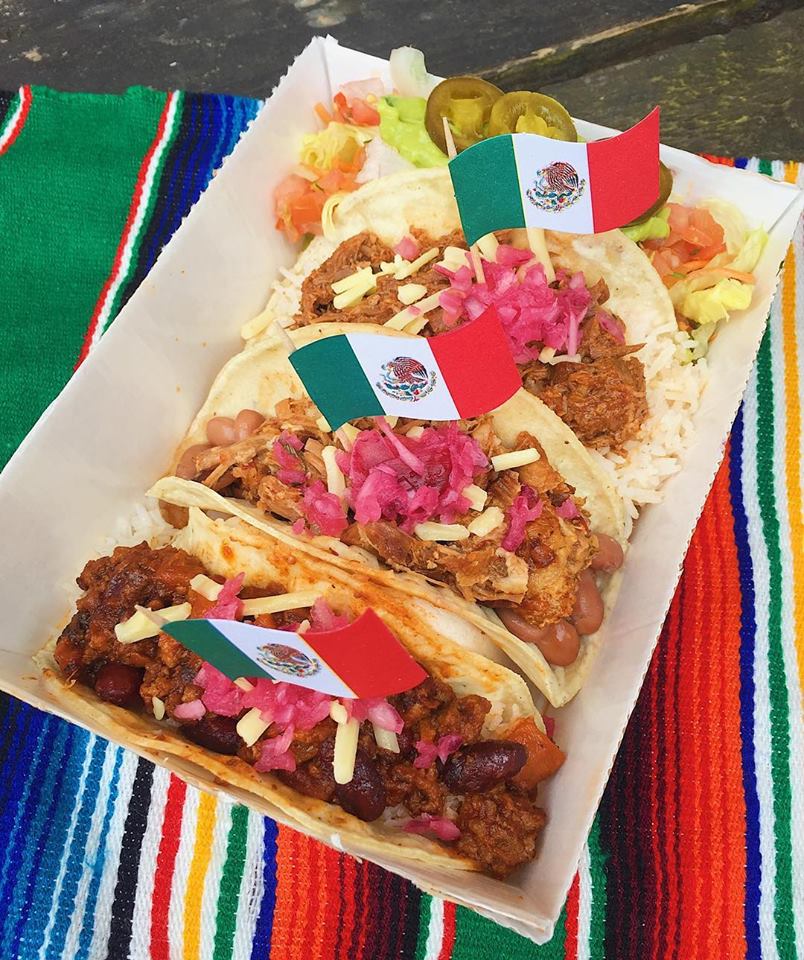 🌮🌮🌮🌮🌮🌮🌮🌮🌮🌮🌮🌮🌮🌮🌮🌮🌮
Picante Lamb Tacos Fantasticos
Pancho’s Burritos
I’ll forever stick to my guns when it comes to Pancho’s and my enduring belief that it is by far the city’s most authentic Mexican grub. Their burritos are legendary but in my opinion they don’t come close to the power of their tacos – served on proper corn tortillas and available with a dazzling choice of fillings and additional extras. Personally I can’t not choose their Picante Lamb, which is cooked in a super sexy smokey chipotle sauce and is pretty much perfect with some sour cream, jalapenos and cheese on top. Top stuff this. 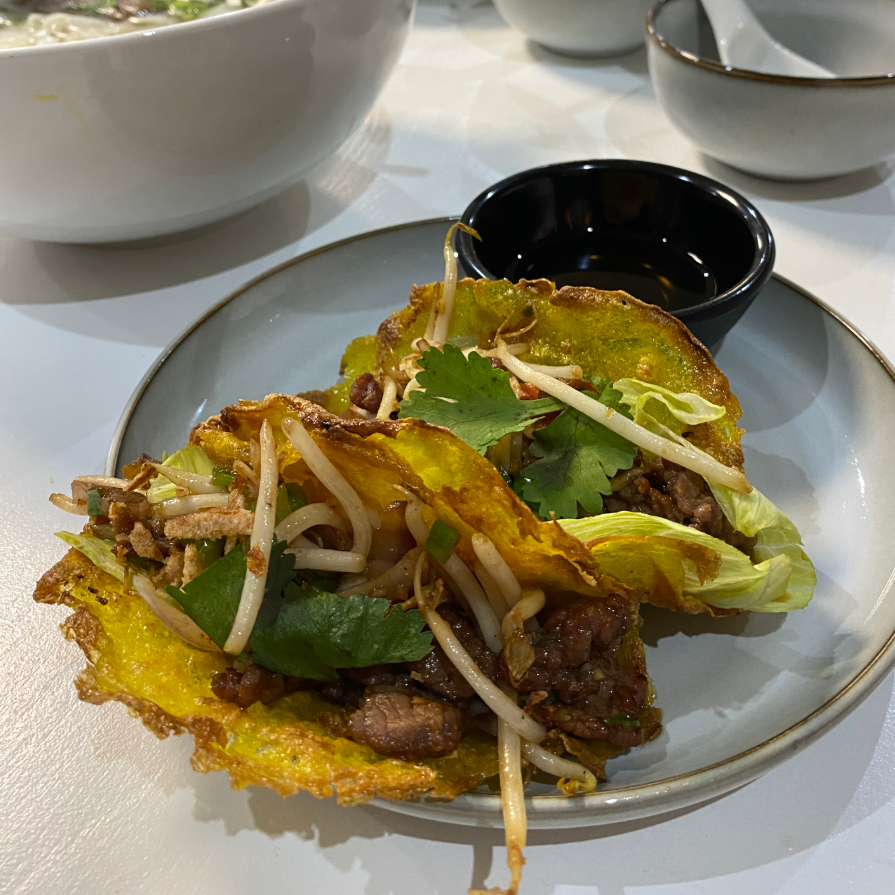 Beef Vietnamese Tacos
Pho Cue
The newest kid on the block here – Pho Cue only opened this week in China Town and it’s managed to blow most of the Finest staff away with its modern take on traditional Vietnamese dishes. One of their greatest accomplishments are their Vietnamese Tacos, made using crispy pancakes and stuffed with an assortment of fillings. “The tastiest tacos in Manchester” as one of the team said. Bold words – suppose you’ll have to try them to confirm.