The Heaton Moor Hidden Gem with Steak & Chips that takes 45 days to make! 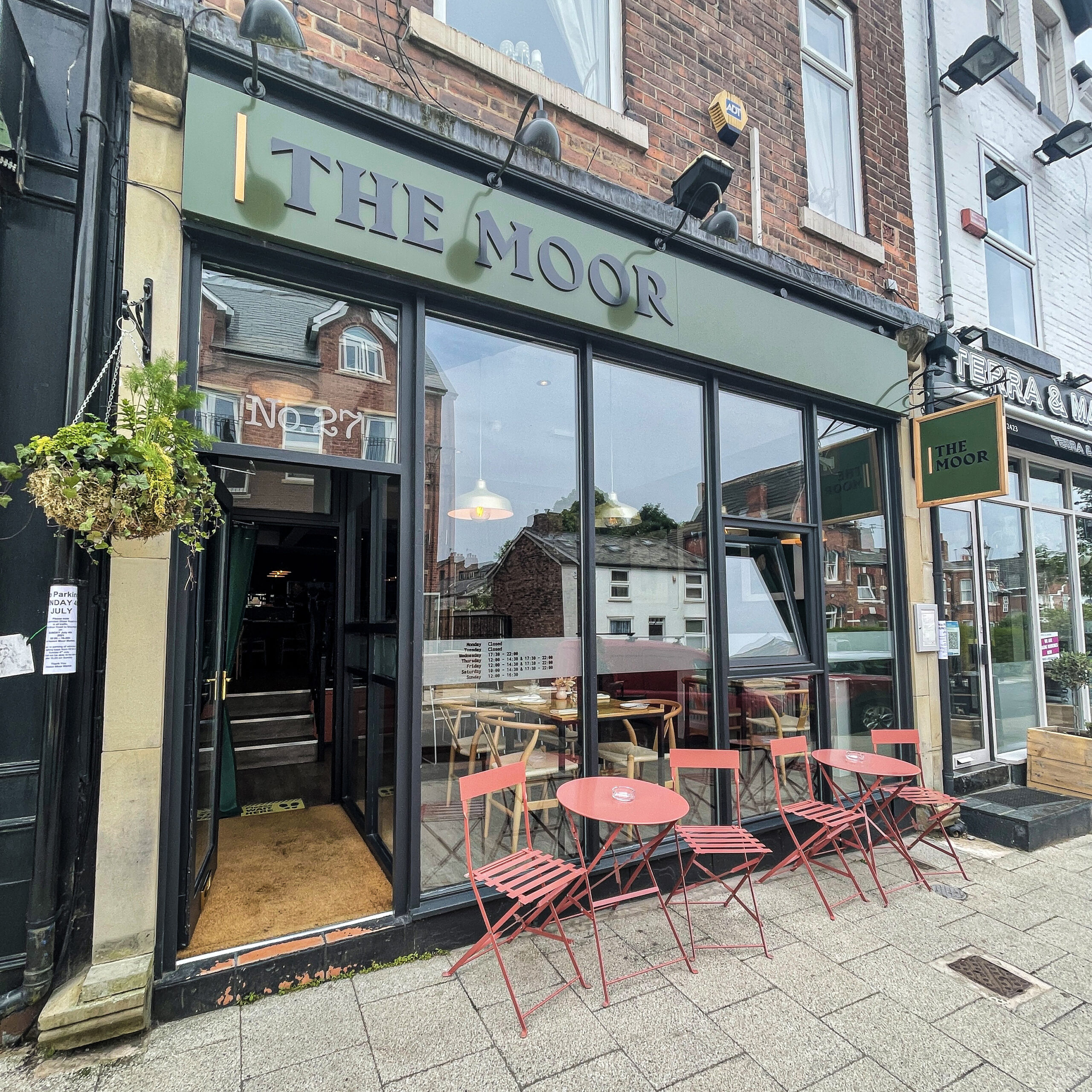 To say that you have “probably the best chips in the North West” is a VERY bold statement indeed.

Even if someone was mad enough to actually eat every single chip in every single venue in the region, I doubt their heart would stay beating for long enough for them to make an informed decision on which was the tastiest.

But it doesn’t matter, what matters is that the claim has been made. The gauntlet has been laid and those words cannot be pushed back into James Hulme’s mouth. But, if I’m being honest with you here – he might just be on to something, and his “re-invention” of the humble chip might just be his greatest work yet. 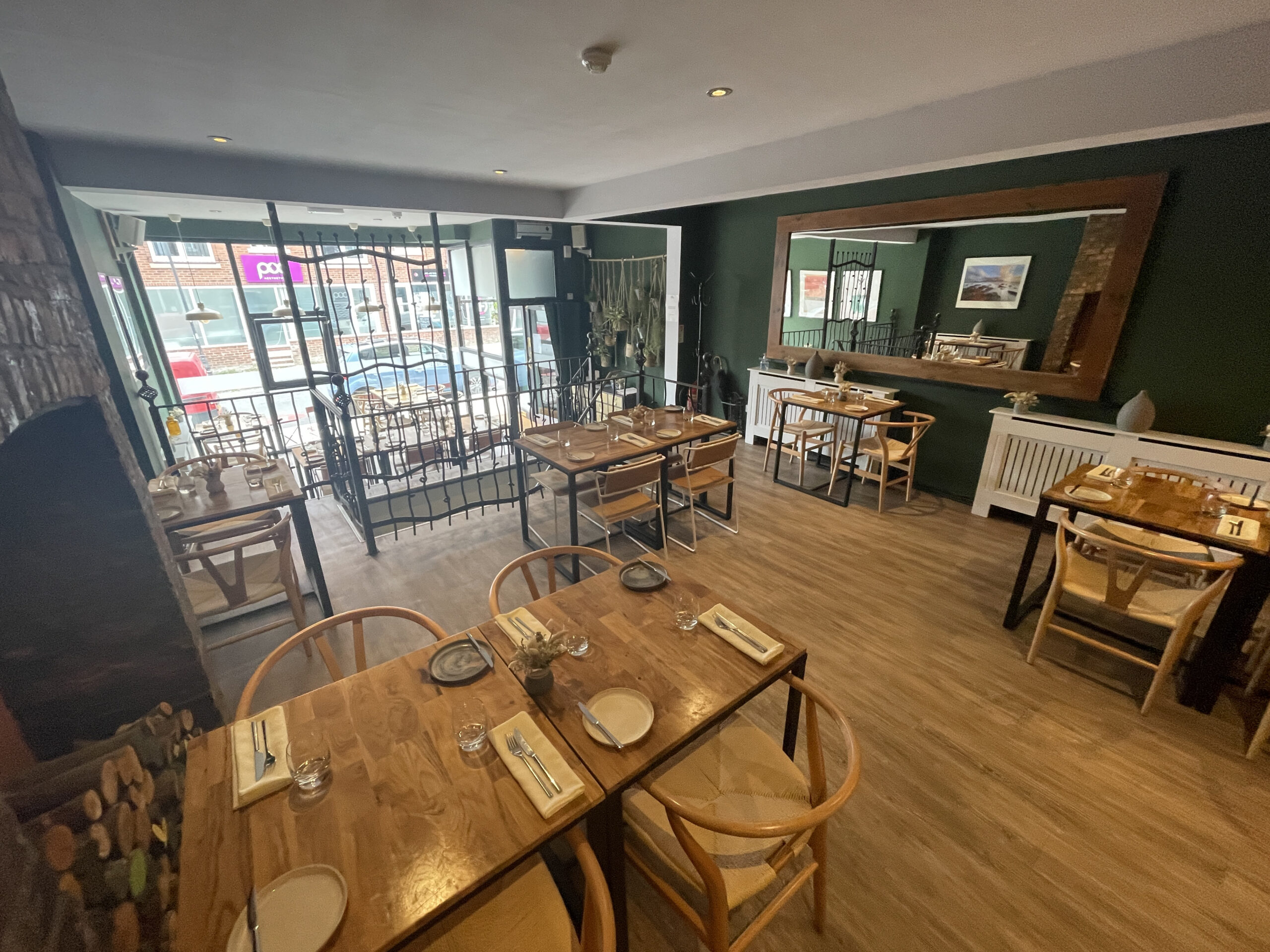 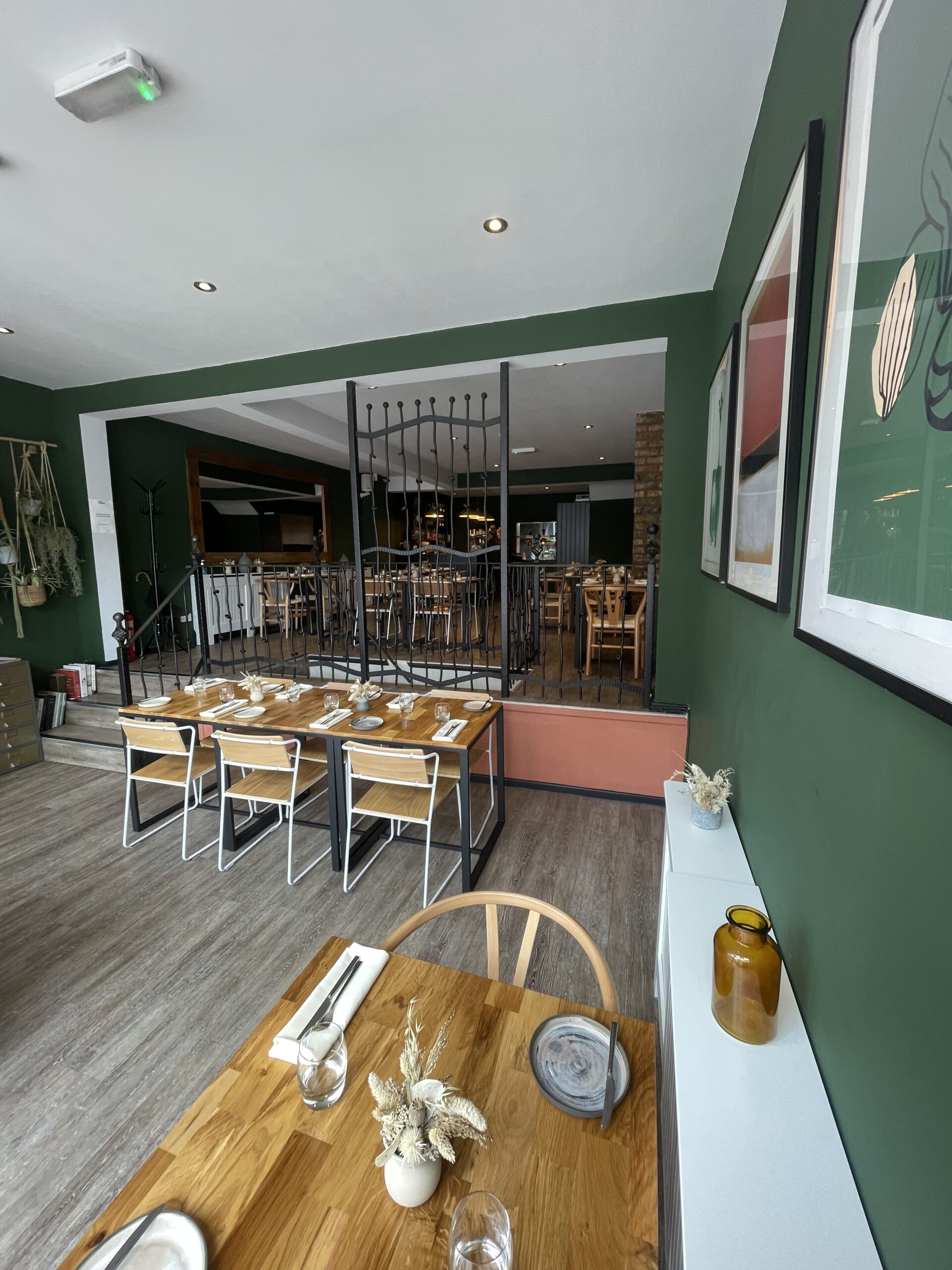 James is the owner and Head Chef of a cracking little hidden gem of a restaurant over in Heaton Moor, imaginatively called The Moor.

But what James lacks in imagination when choosing a name, he more than makes up for it with his ever-changing menus and exceptional dishes, all set in a relaxed, casual atmosphere.. The Steak & Chips in the title is just a tiny part of some seriously impressive things happening in his kitchen.

James is a chef who likes to be seasonal with his menus, and “utilise as much of the ingredient as possible“, initially training under Marco Pierre White, he quickly rose up the ranks before heading to Quaglino’s in St. James in London, then up to Manchester to open 20 Stories and now helm his own restaurant in the Stockport suburb of Heaton Moor. 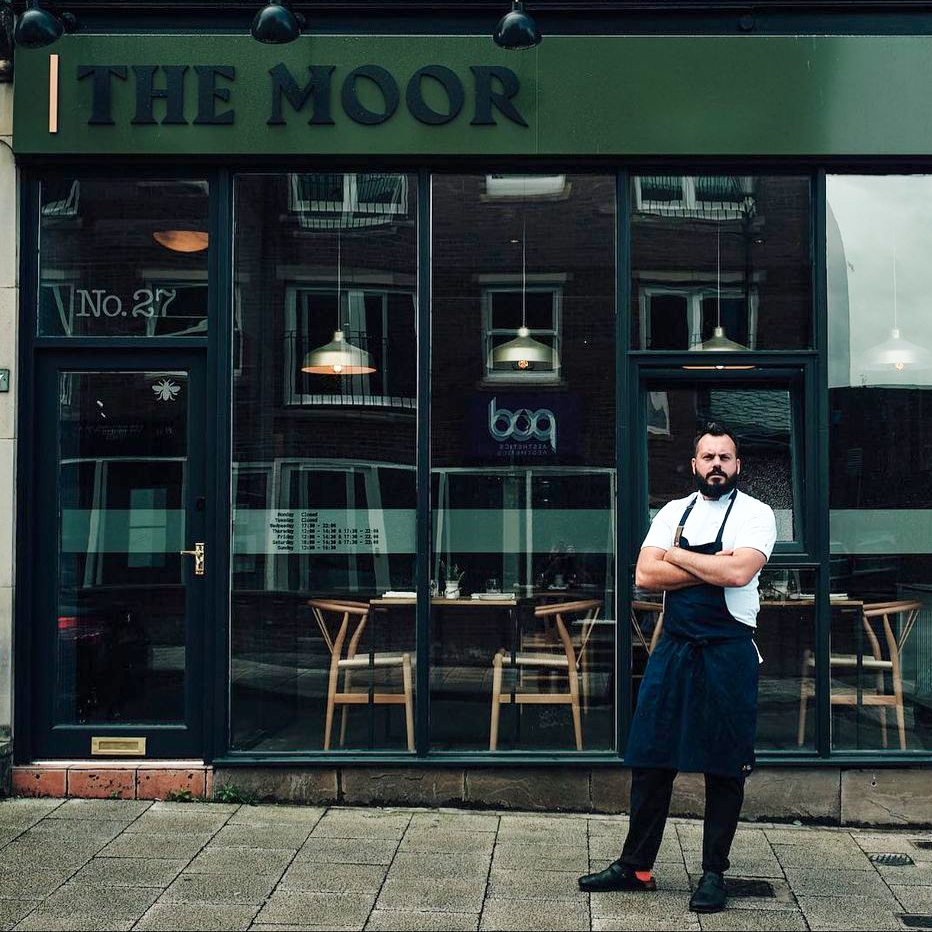 His “no waste” style of preparation and cooking is evident throughout his ever-changing menus, from using rare and unusual cuts of meat that you wouldn’t normally see, to his previously mentioned “best chips in the North West” and every single step along the way.

First of all, James has sourced retired dairy cows from a farm just outside Buxton. Traditionally used in Basque cooking, the idea behind using retired dairy cows is all based on the fact that once they’ve finished grafting for the milking industry, they’re put out to pasture to fatten up and relax – adding to the maturity and marbling of the meat. 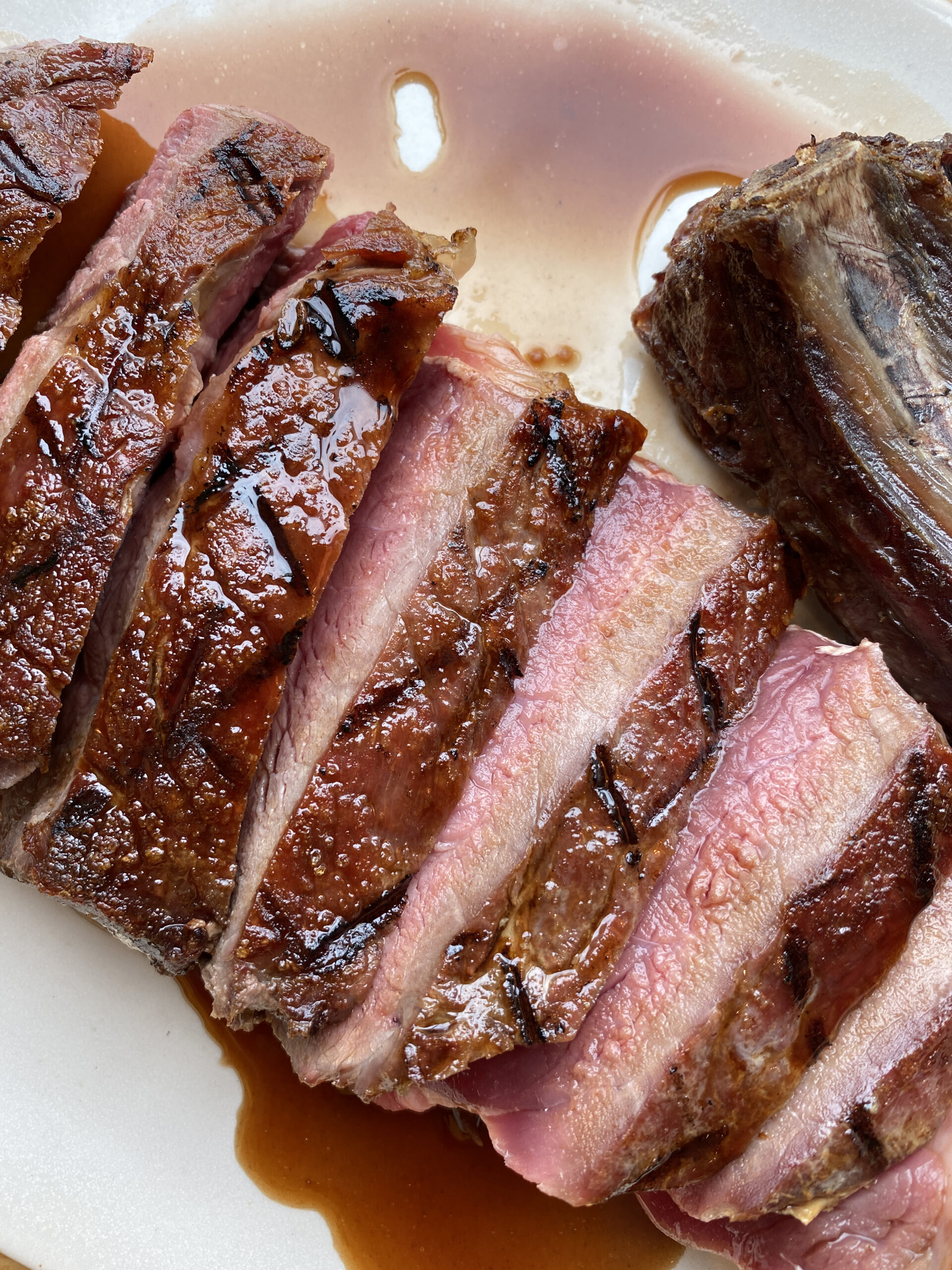 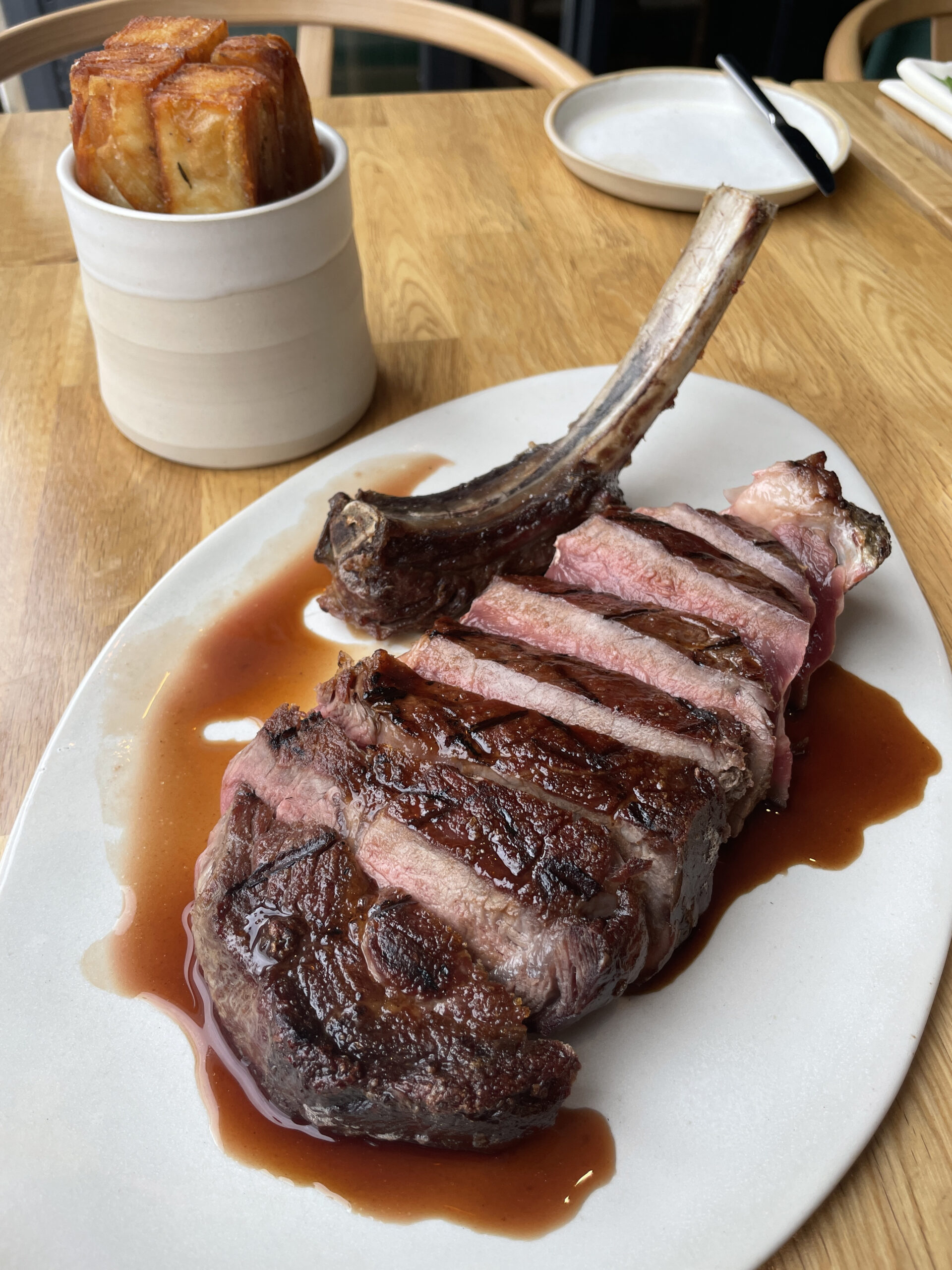 Using the rib of the cow, the beef is cooked over charcoal that’s actually made from fell trees on the same farm that they live on. Aged for a minimum of 40 days, nothing on the meat goes to waste; the fat is used for cooking, the bones for stock and the trimmings go to make the sauces.

Fat from the beef as it cooks on the coals then goes to make the chips, which is a complex and perhaps arduous process in itself. Nobody said making the best chips in existence was going to be easy though… 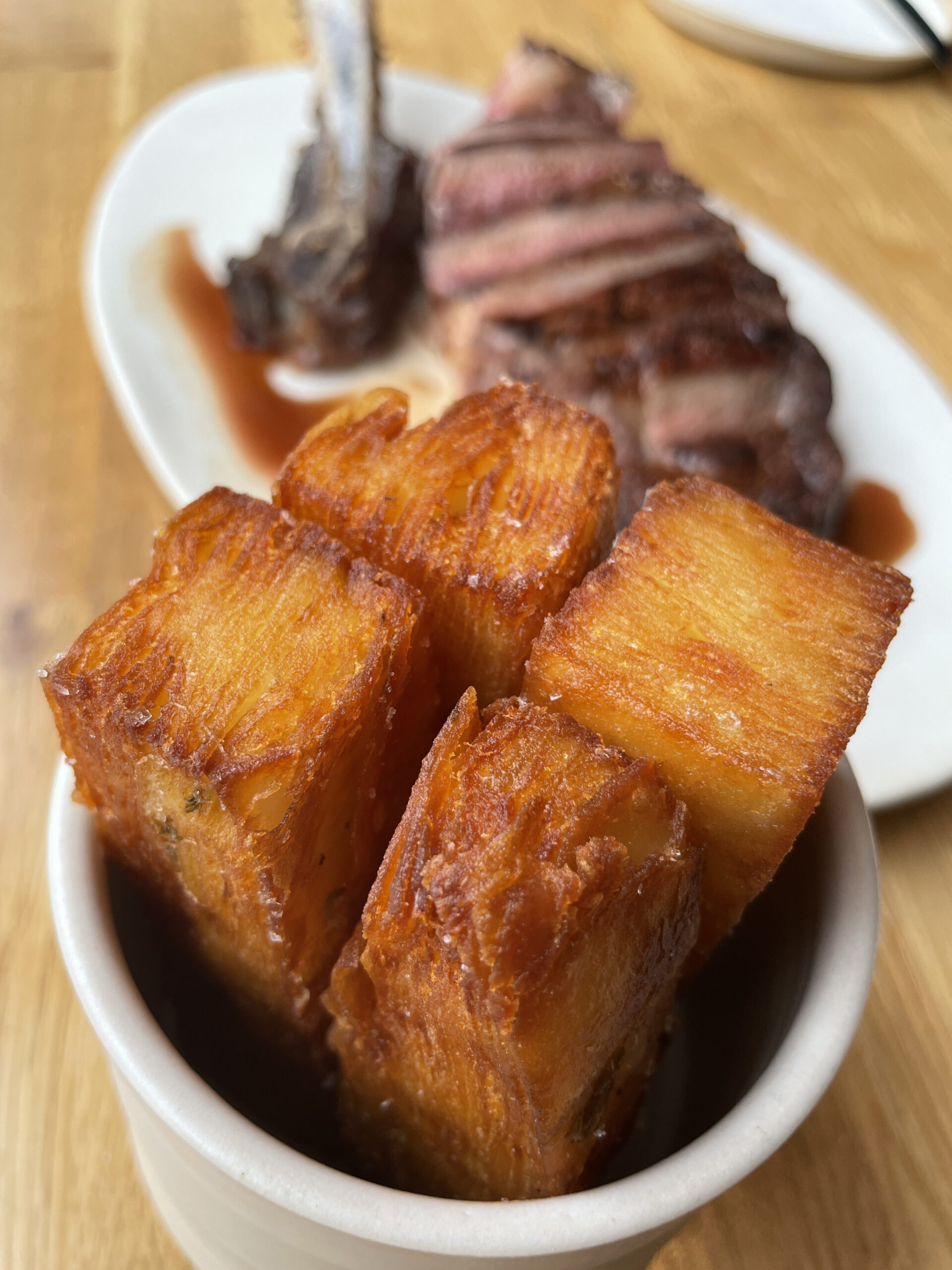 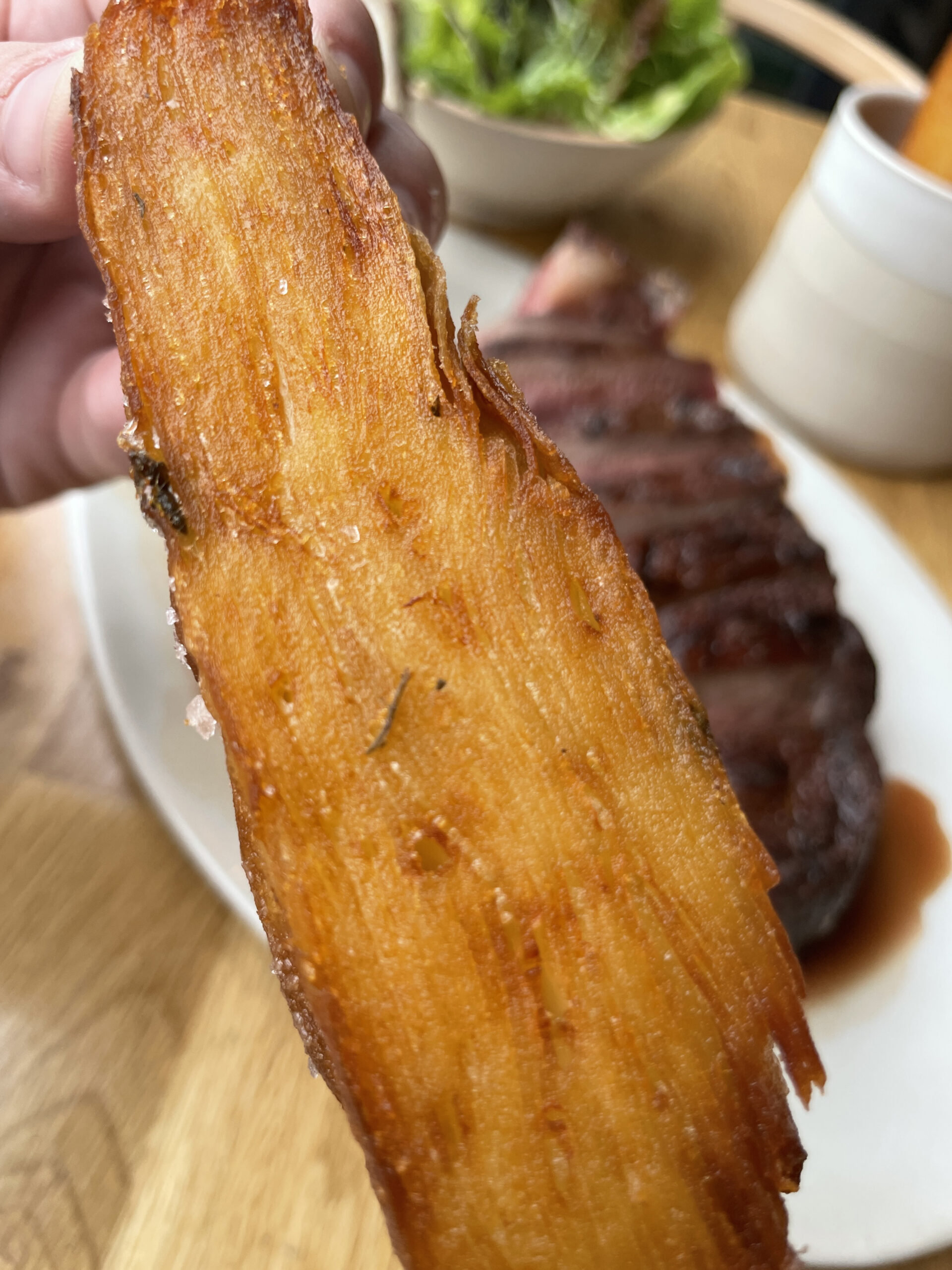 The first step is to thinly slice potatoes so that they’re paper-thin, and then mix them with the melted beef fat from the ribs and a bit of thyme. Bake in the oven until soft.

These slices are then pressed together overnight, making them as compact as possible, and they’re then cut into ‘chip’ shapes and then deep fried to order. Extra crispy on the outside and fluffy in the middle – these chips are easily some of (if not THE best) that you’ve ever tasted in your life. For any self-respecting foodie, or chip lover, a visit to The Moor to try these beauties is a MUST! 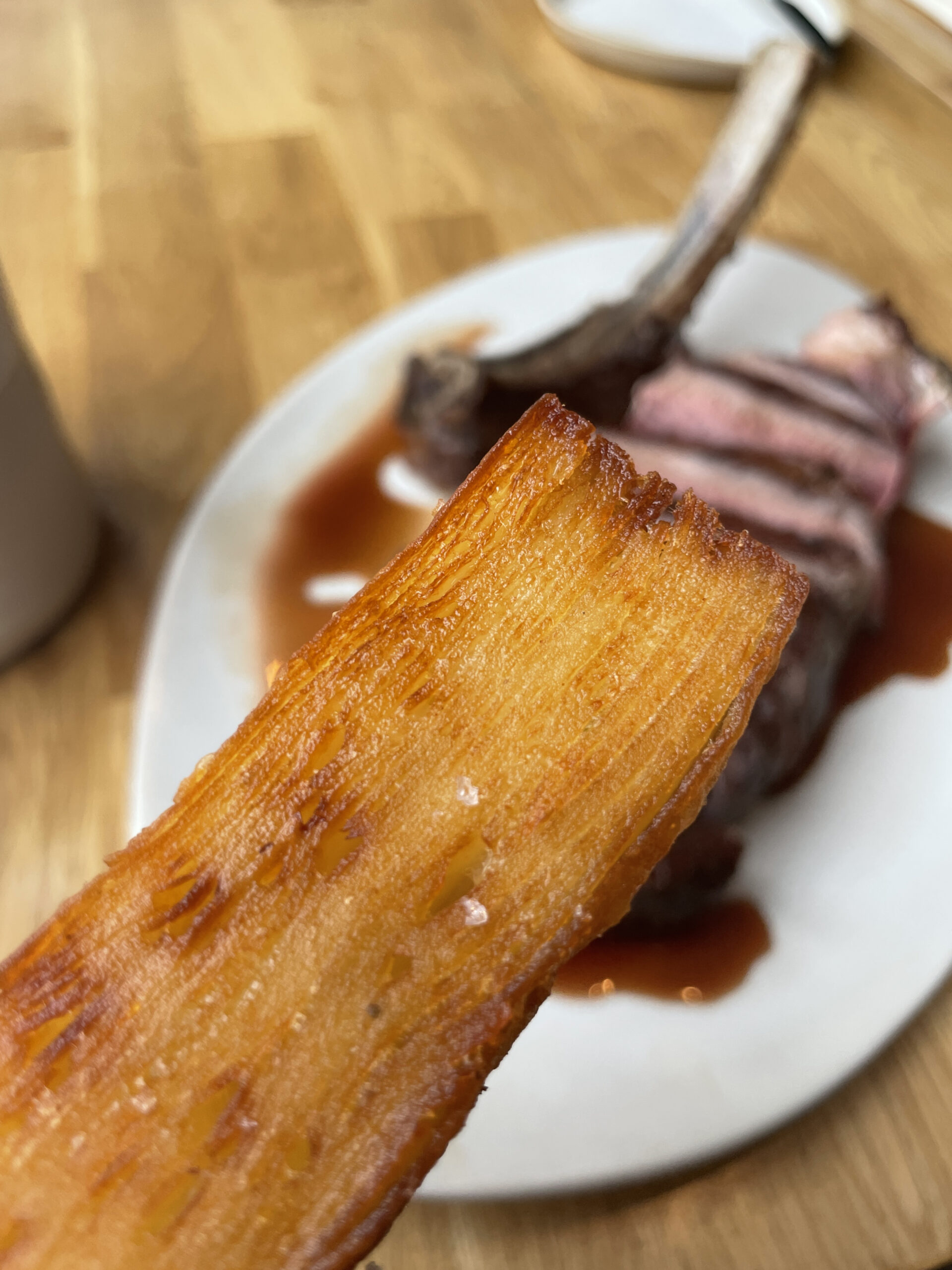 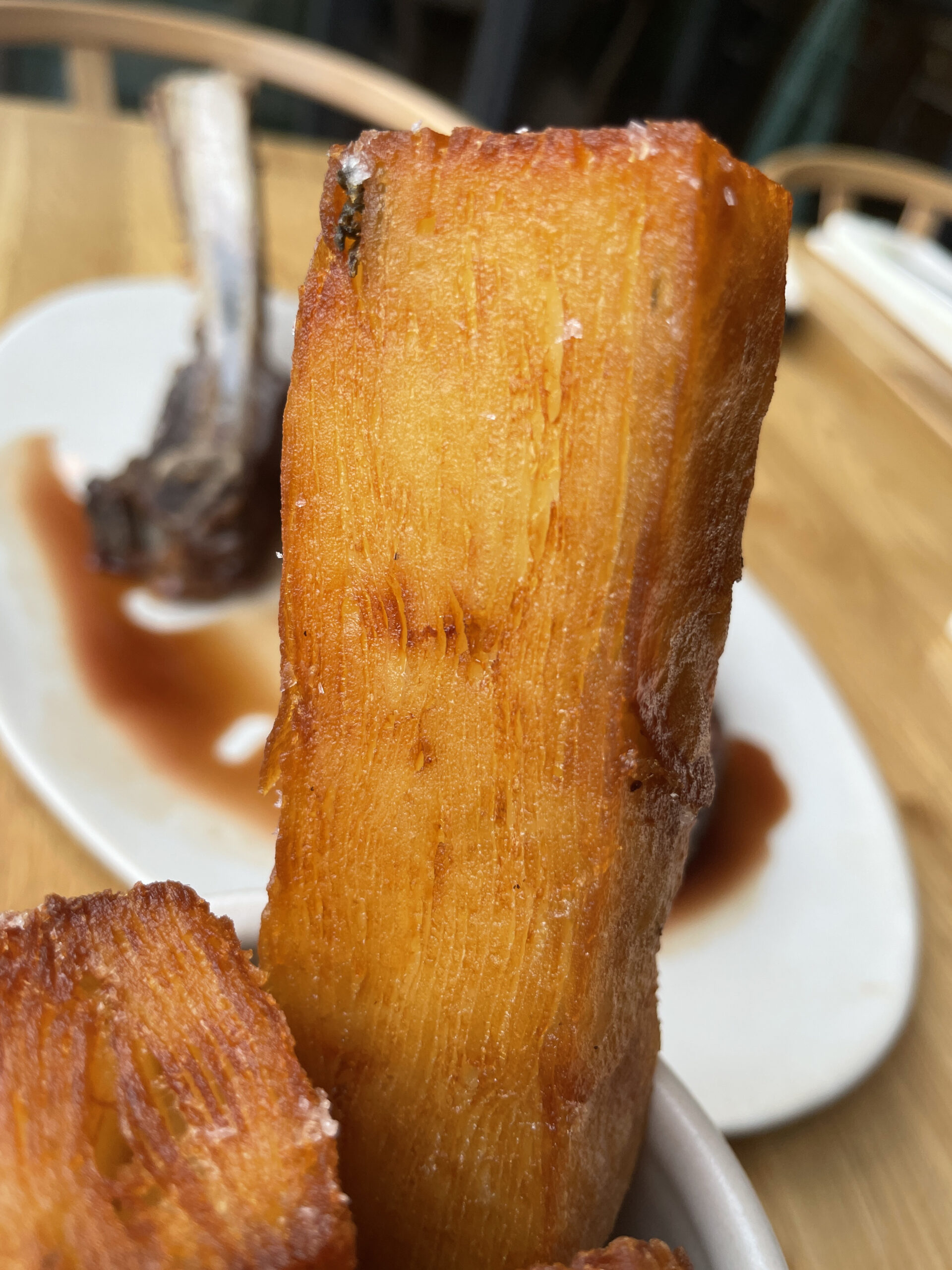 James is keen to point out here that the chips are ONLY available with the Rib Steak, you can’t actually order them as a side on their own as he would then have to “employ someone with the sole purpose of making those chips day-in, day-out.”

There’s LOADS more I could say about The Moor. I could talk about their exquisite Mangalitza Pork Belly which is sourced from a farm in North Wales and is commonly referred to as the ‘Kobe Beef‘ of pork due to it’s similar marbled appearance and tenderness when cooked. 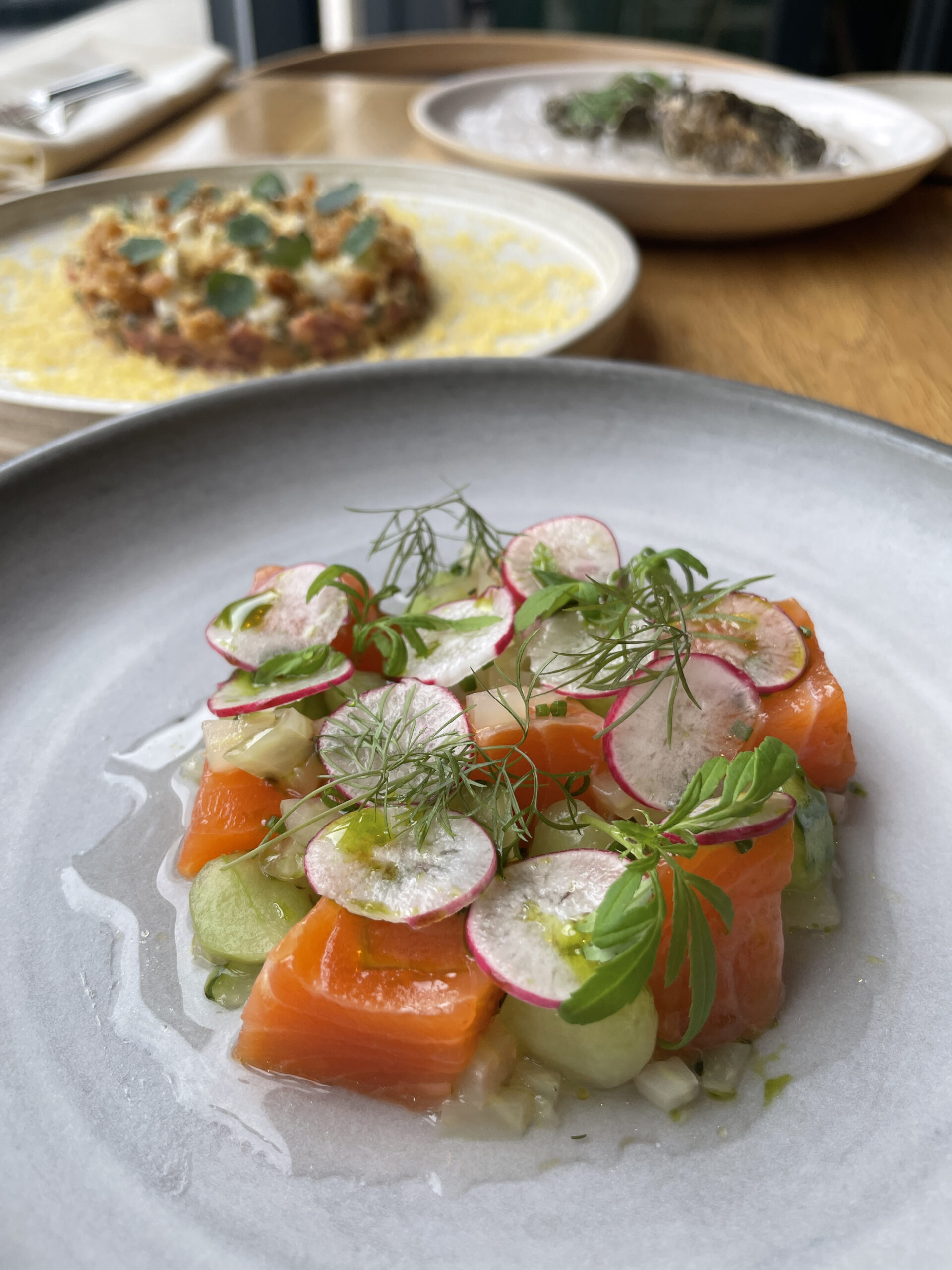 Or I could mention their Beef Tartare which comes topped with whipped bone marrow, beef fat croutons and grated cured egg yolks. Or the Dashi-cured Chalk Stream Trout from Hampshire, served with a heirloom cucumber & tomato dressing and fennel.

What I will also mention is that Heaton Moor is only a 9 minute train out of the city centre, and a quick look on the National Rail Enquires site tells me that it’s just £3.80 each way. So there’s no excuse for you not to get down there and give The Moor a visit. 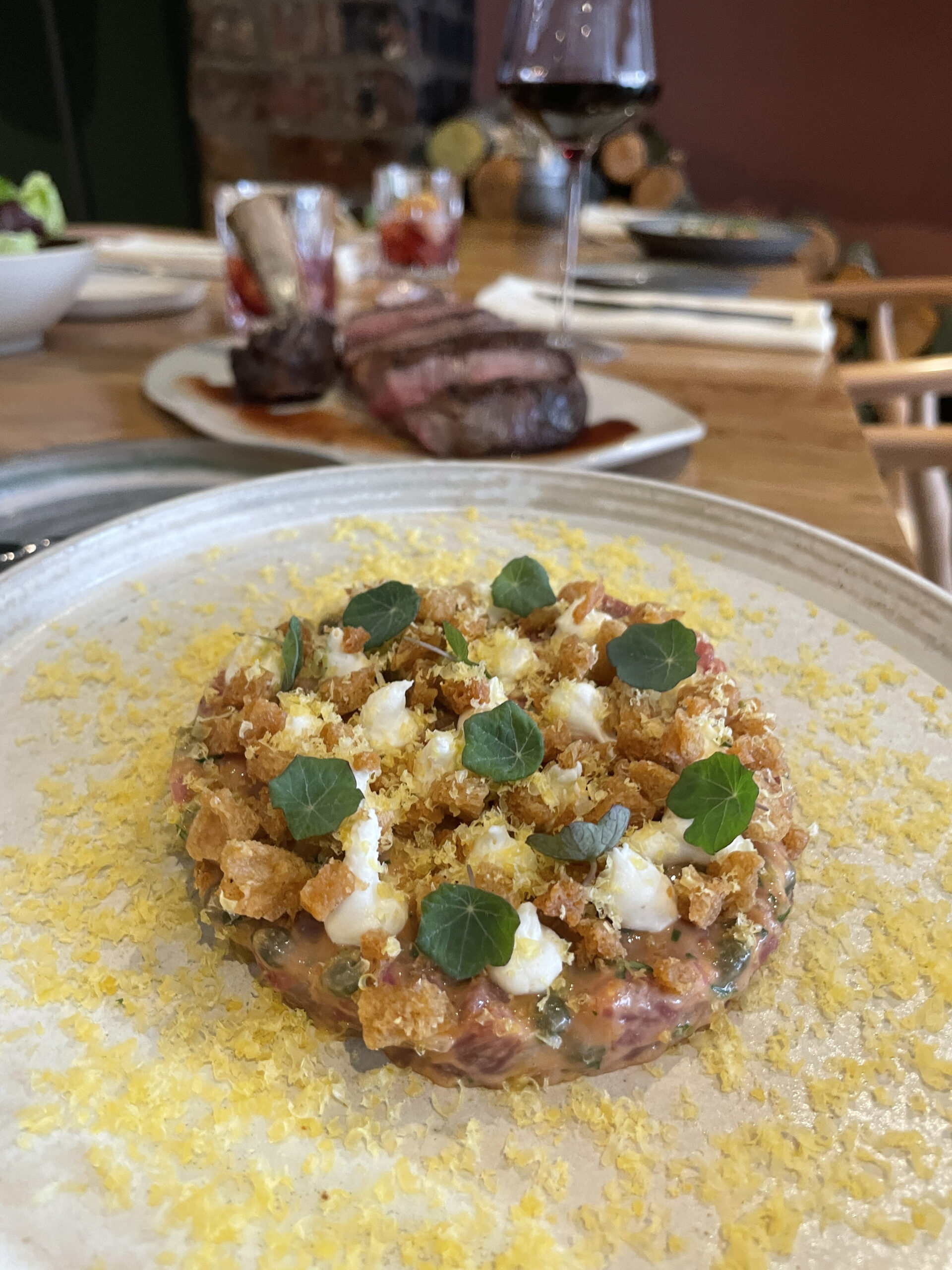 James is doing some seriously impressive things down there, and it deserves a wider audience. Even if you just go for the chips, you’ll be bowled over by this place – we certainly were!