Taking in a combination of Persian, Indian and Turkic influences... 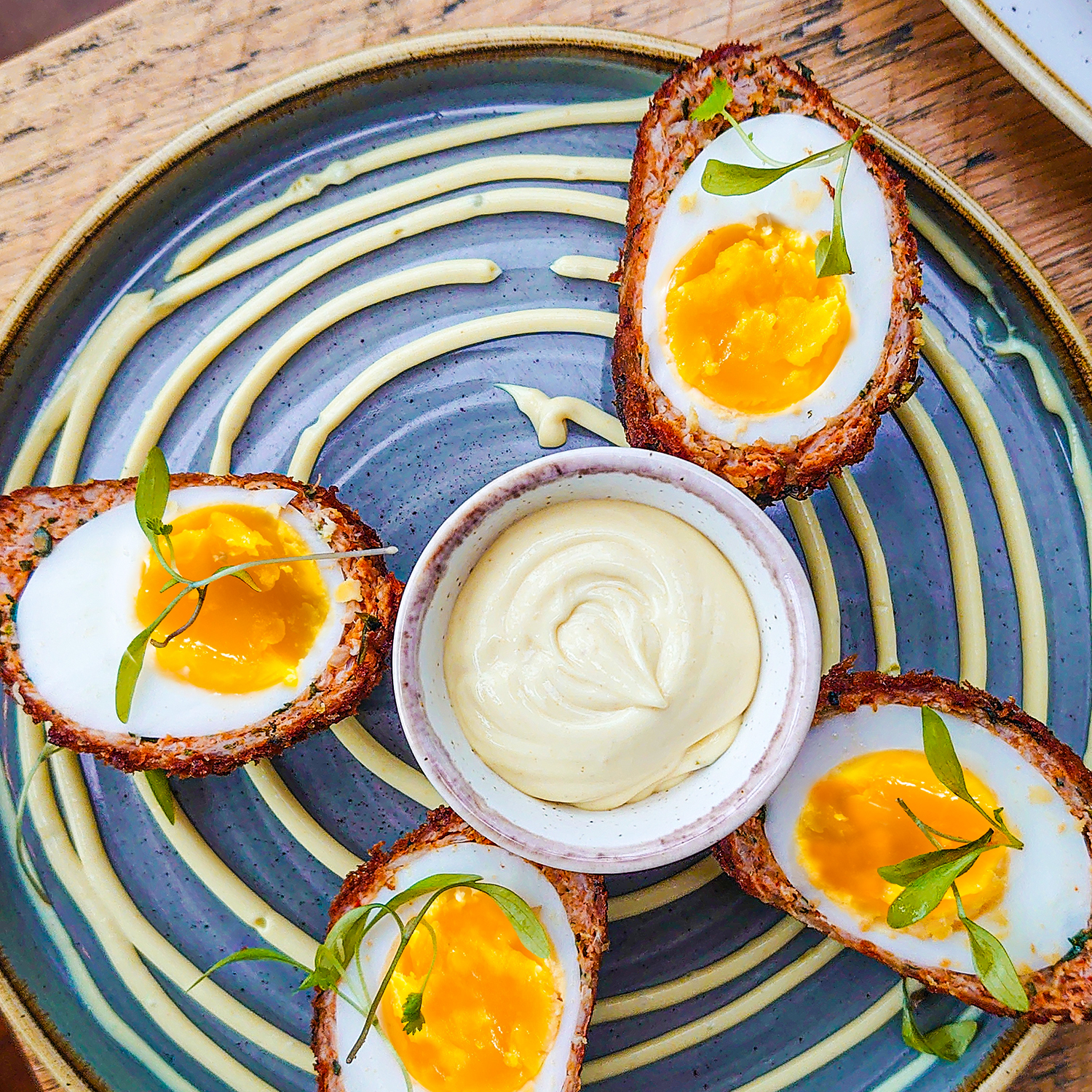 Now, I never knew this but the origins of the humble Scotch Egg are still, to this day, hotly contested.

Many argue that Fortnum & Mason created the very first one back in 1738, but most historians argue that it was in fact a dish inspired by something encountered during the British Raj in the 18th Century.

The British Empire’s reach back then was colossal, with the famous quote “the empire on which the sun never sets” never being truer. As the British infiltrated these ‘new’ colonies, they encountered the Mughal Empire – which for two centuries stretched from northern Afghanistan down to the Deccan plateau in the south of India 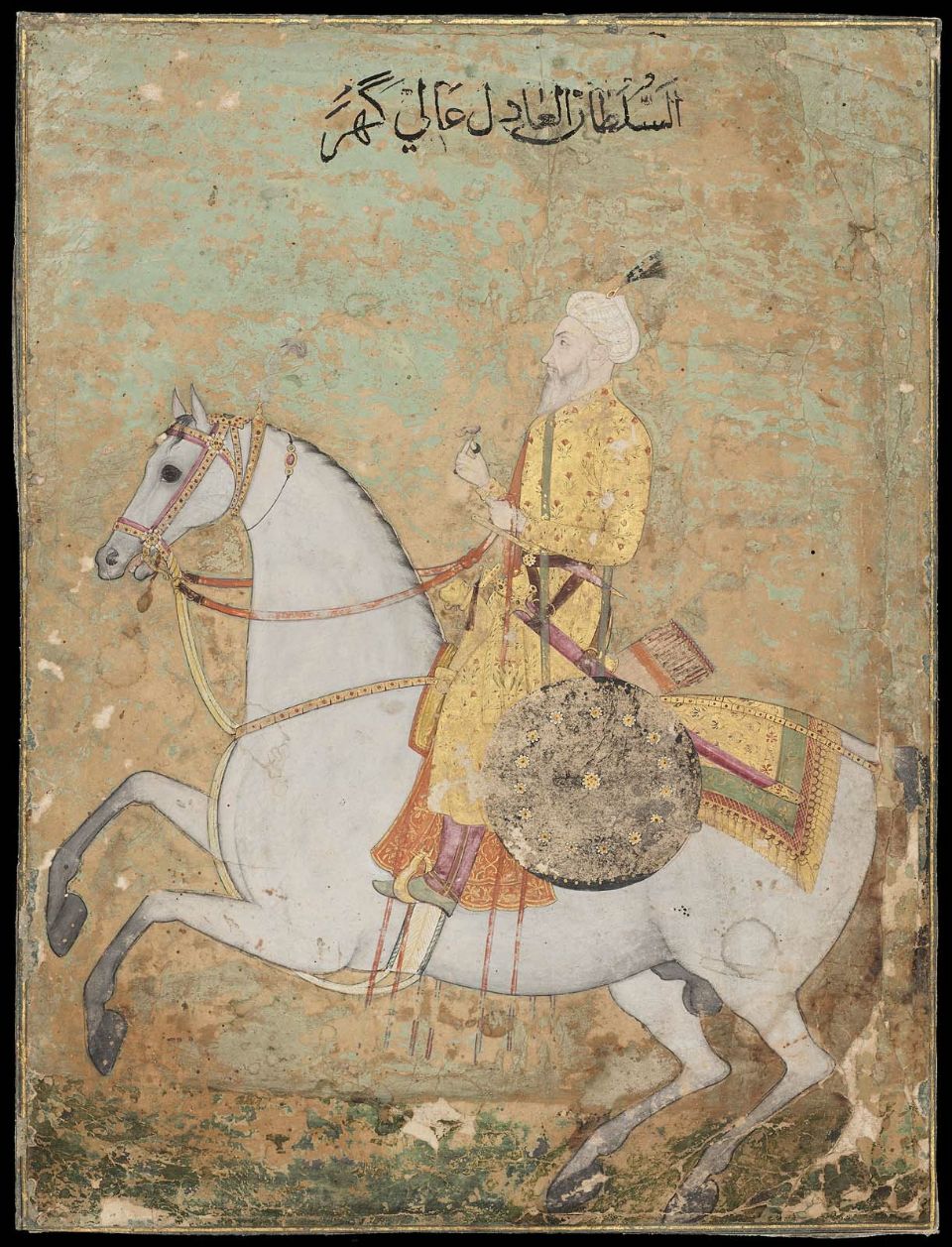 The Mughal Empire itself was reduced substantially during British rule, with the East India Company relegating it to the region in and around Old Delhi before being formally dissolved by the British Raj after the horrific events of the Indian Rebellion of 1857.

The Empire’s culture and influence remained however, and still does to this very day, through art, textiles, architecture and indeed cuisine – which is where the Scotch Egg comes in. The story goes that the British soldiers brought the Scotch Egg back to London from India after discovering the Mughal dish of ‘Nargisi Kofta‘ – an egg covered in minced meat and served with curry. 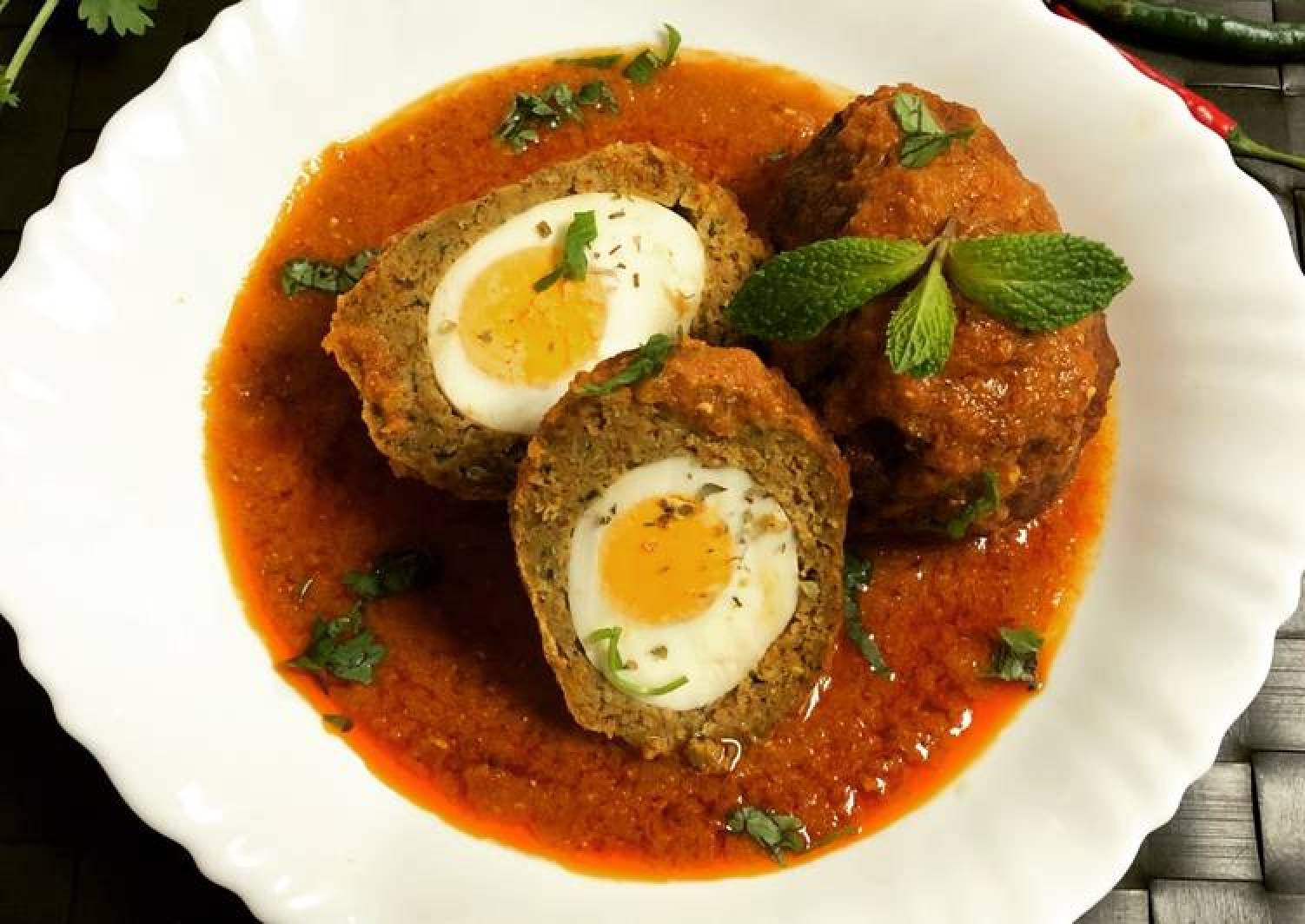 Food historian Annie Gray wrote in The Oxford Companion To Food; “I think you can pin down the Scotch egg’s introduction to Britain of the late 17th or early 18th century, and I suspect it came from India. Its forebear may well have been the nargisi kofta or ‘narcissus kofta’ — named after the flower’s white-and-yellow petals — which came to India from Persia with the Mughal emperors.

“The Mughals influenced two major regions with their cuisine — Awadh and Hyderabad — the egg is generally wrapped inside meat mince and fried, then served in a brown, yogurt-based gravy.” 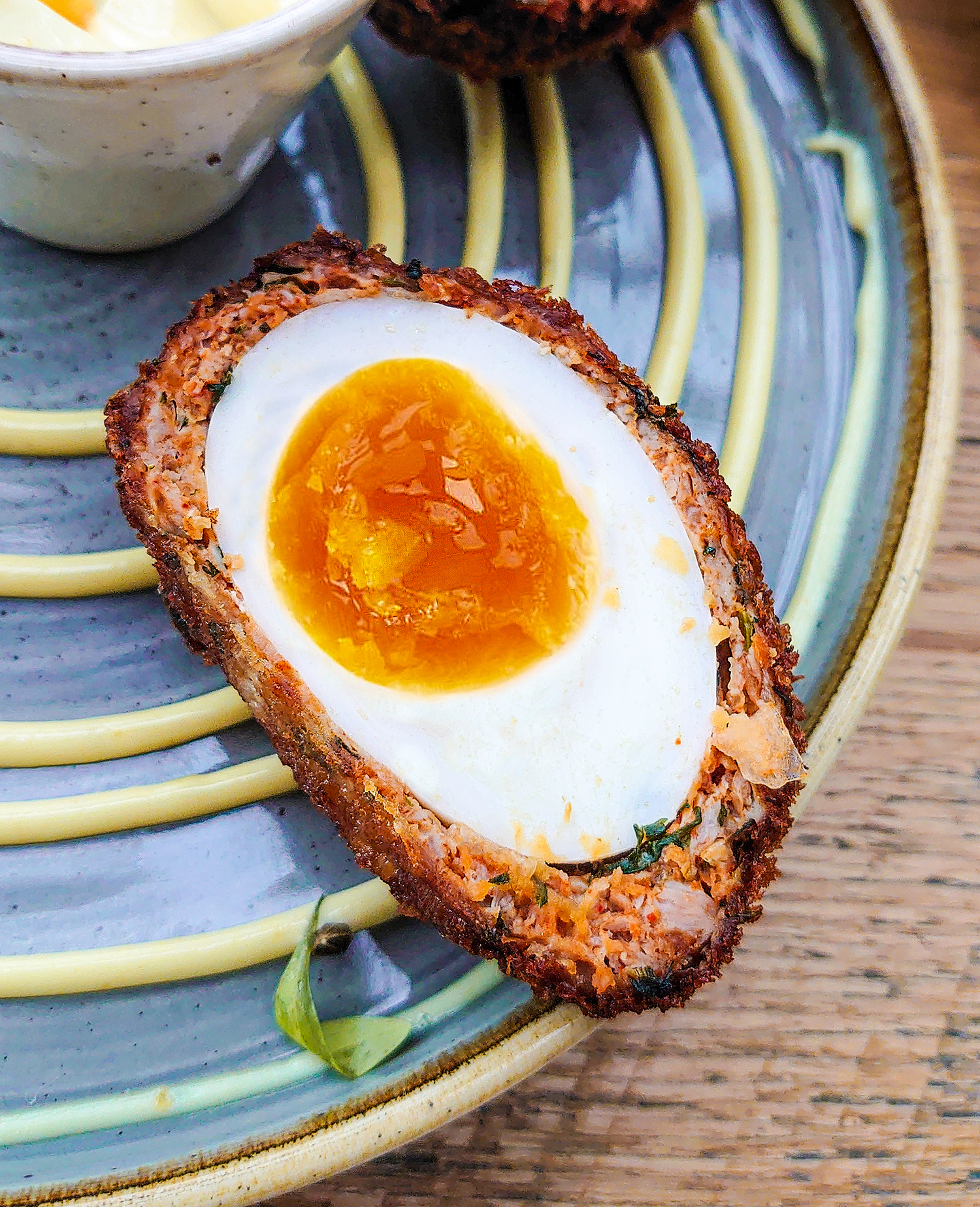 And this is where Delhi House Cafe’s Masala Chicken Scotch Eggs should be introduced, a variation on the traditional Scotch Egg that takes it right back to its Indian roots. A boiled egg, coated with a spicy masala chicken and then coated in breadcrumbs and fried, accompanied by a unique home-made mustard mayo for dipping – this is unlike any Scotch Egg you’ve tasted before.

All that’s missing when comparing it to the traditional Nargisi Kofta is the curry that the dish is served with, but this is Delhi House Cafe’s modern take on the dish – much like many of the creations on their menu.

Taking a traditional Indian offering and then re-inventing it for a Mancunian palate, there are some truly unique dishes on the menu there, many of which you won’t find anywhere else outside of Delhi. 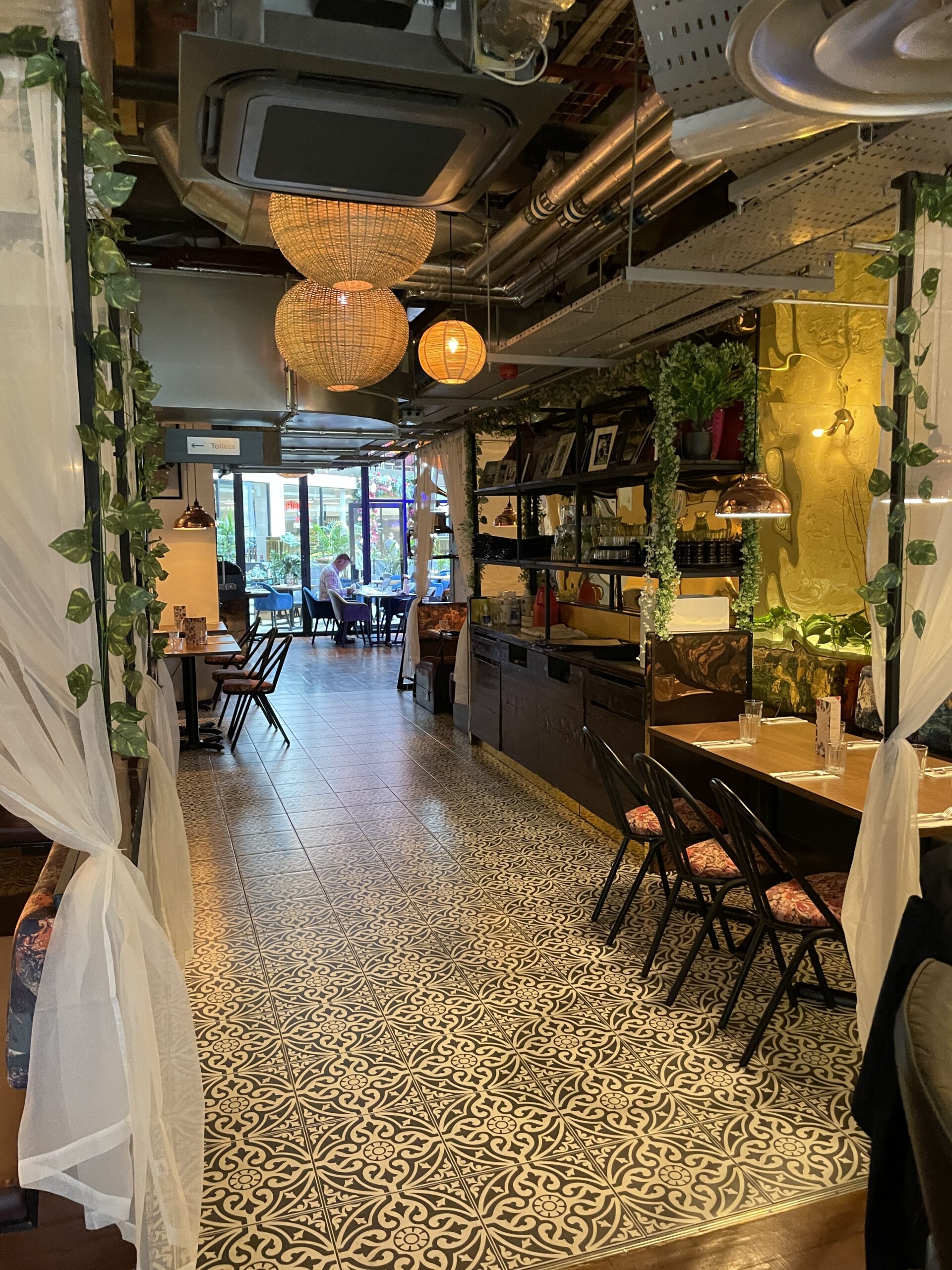 The Masala Chicken Scotch Eggs are fantastic, and if you’re a fan of Scotch Eggs (who isn’t!?) then this one should definitely be on your ‘to eat’ list. Combining eggs with the spices of India has always been a winner, and this dish will certainly put a spring in your step – ready to tackle the day ahead.

The Masala Chicken Scotch Eggs are part of Delhi House Cafe’s excellent Breakfast Menu, which is available every day until 4pm.