The Rise & Fall of Boddingtons: The Cream of Manchester

A tale of beers, brewing, poisonings, bombs, business, beauties and THOSE adverts...

I’ve just been watching an episode of Friends – The One With All The Kissing – and in between Chandler secretly getting off with Monica and Ross moaning about saying Rachel’s name at his wedding, Joey randomly mentions his love of Boddingtons.

Quite how Boddingtons got onto a Friends episode – I don’t know – but it made me think about the Manchester beer and brewery and therefore I’ve spent the last couple of hours looking into the Rise & Fall of what affectionately became known as ‘The Cream of Manchester’.

Quite why there was a ‘rise’ and then subsequently a ‘fall’ is open to extensive debate – but we will get onto that in a bit. First of all, let’s start with that rise…

In the olden times, and I’m talking pretty much since the beginning of human time around 13,000 years ago, beer was everyone’s preferred choice of drink. You see, unless you had a pristine babbling brook close by to your house – water tended to get dirty and make you sick.

As communities and civilisation grew, the water became dirtier, with modern sanitation techniques becoming popular in the Roman times but then pretty much being ignored for about 800 years here in the UK.

Mainly due to the fact that all sewers flowed into open water sources, if you found yourself drinking the water, you’d invariably get sick and sometimes croak it. With an average life expectancy of about 36 – it seems to me that a lot of people were probably drinking it. 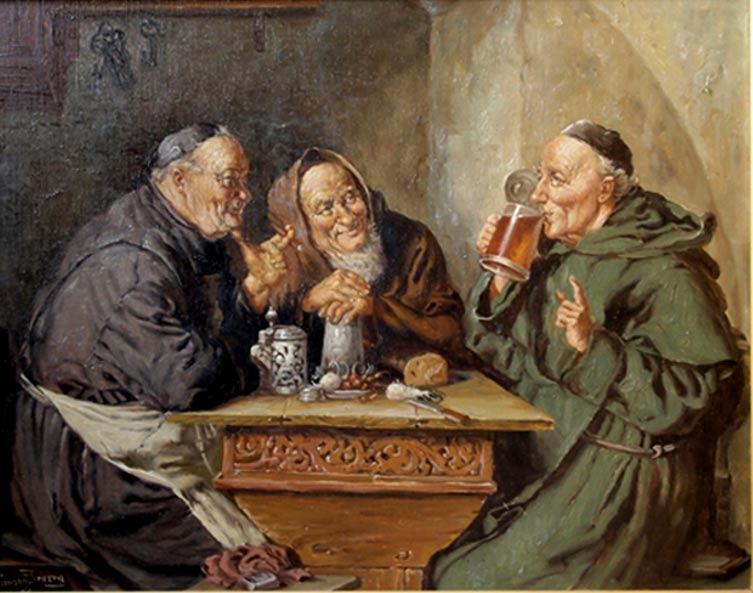 That’s where beer came in. Because it’s fermented and brewed – it was cleaner and therefore much healthier to drink. It was typically brewed within households, and it came to be known as ‘Table Beer’ a much weaker, thicker alternative to what we know today – and even the kids would be allowed drink it.

Away from small homes, places where many people lived under one roof developed much larger breweries – leading to monasteries and schools often having large beer brewing operations, and even moving into making the stronger stuff – like the beloved Buckfast Abbey in Devon.

By the mid-1700s, Manchester Grammar School had a huge monopoly on the grinding of grain in the city – mostly owing to the fact that they had the biggest facilities and a large number of ‘free’ workers who would make the beer under the guise of education. 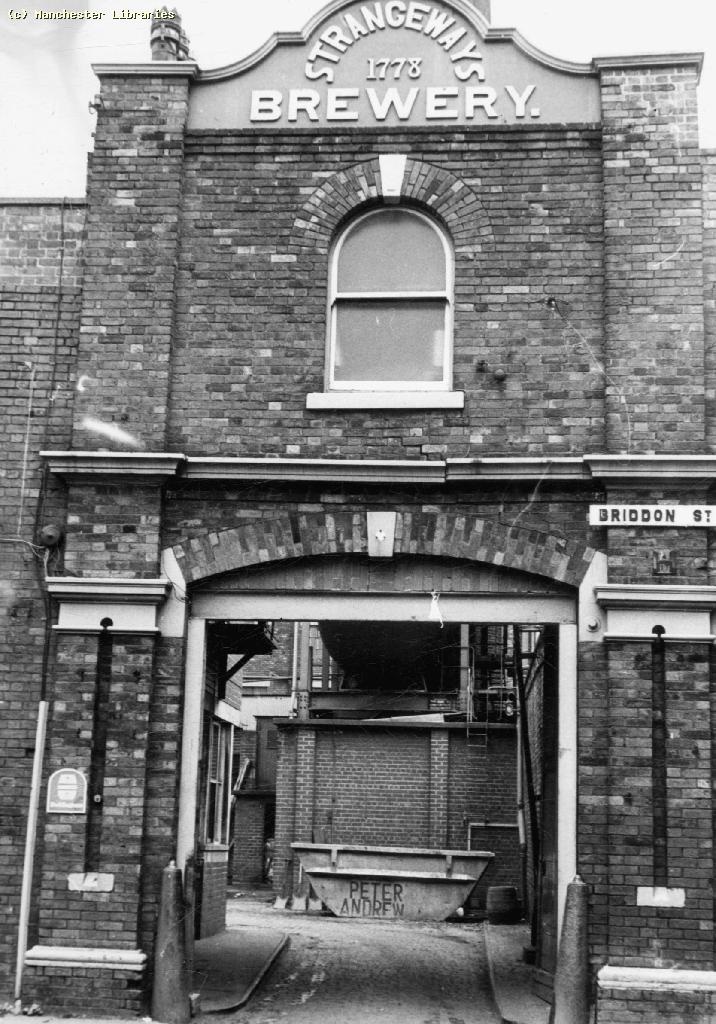 But something was happening in the city that created the need for more (and larger) breweries. As workplaces grew, so did the market for a few swift pints after work and thus hundreds of small brewers began setting up shop – and the Strangeways Brewery was one of them.

Forced outside of the city centre due to the Grammar School’s monopoly, two grain merchants, Thomas Caister and Thomas Fry created a moderately-sized operation and started to whet the appetites of the city’s workforce.

By 1831, Strangeways Brewery was employing a rather quiet young man named John Boddington as a clerk. He was from down South and had had a rather poor upbringing, being one of 8 children with a father who struggled to earn a decent crust for them.

Moving up North to follow a job prospect in Stockport, John Boddington moved to Strangeways a few years later and was quickly followed by his family – probably in the hope that he could help provide for them in the increasingly prosperous city of Manchester. 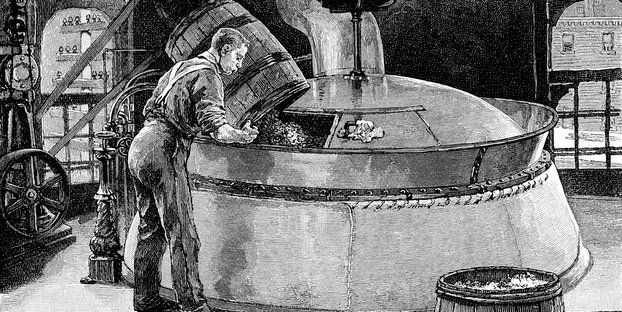 John fucked it all up though and left the job to pursue a career in Corn & Provisions, later emigrating to America and dying penniless over there 20 years later.

His brother though – his brother done good. Seeing the opportunities afforded to him by the brewery, Henry Boddington got a job at his brother’s workplace as a travelling salesman, and once his brother left – he quickly made a name for himself.

In just over 10 years he managed to become a partner in the firm, later borrowing money to become its sole owner in 1877.

By this point their output had grown from 10,000 to 100,000 barrels a year – making it the biggest brewery in the city and cementing their reputation amongst the thousands of people arriving each year to work in the mills.

Henry died a very rich man in 1886, with the company being valued at £150,000 (around £19.5m today). His son William Slater took over, made the company public, doubled its value and so Boddingtons Breweries Ltd. was born.

By the turn of the century Boddingtons owned over 200 public houses making it the 12th largest tied estate in the UK. Things were going well.

Until 1900 that is when more than 6,000 people were poisoned and over 70 people died due to arsenic entering the beer of many of the city’s breweries. A subsequent investigation into the mass poisoning later revealed that arsenic had been present in beer for decades – unknowingly poisoning thousands. 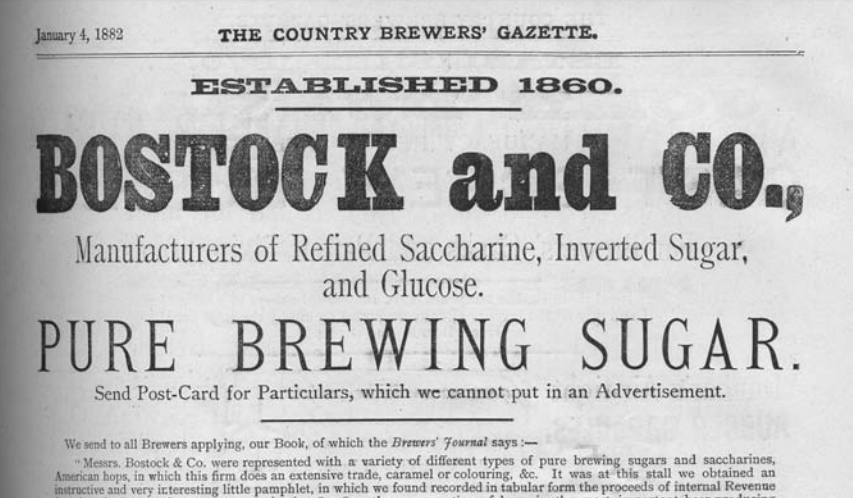 The source of the deadly poisoning was the acid used with the starch – an un-purified sulphuric acid used by Bostock & Co. that contained arsenic. The poison remained in the sugar, and then subsequently poisoned the beer and thousands of people.

Not much was learnt or changed as a result though, with effects on the sale and consumption of beer being very short-lived. There was a significant decline in the birth rate in 1901 in Manchester, Salford and Liverpool though – with an investigation later concluding that the arsenic epidemic was to blame.

Many Deaths and a Bombing

The 20th Century continued to be prosperous for Boddingtons, and as family members died and took over, they continued to serve the city with their beers – an unmovable force within Manchester and a common sight in every pub and on adverts seen on every street. 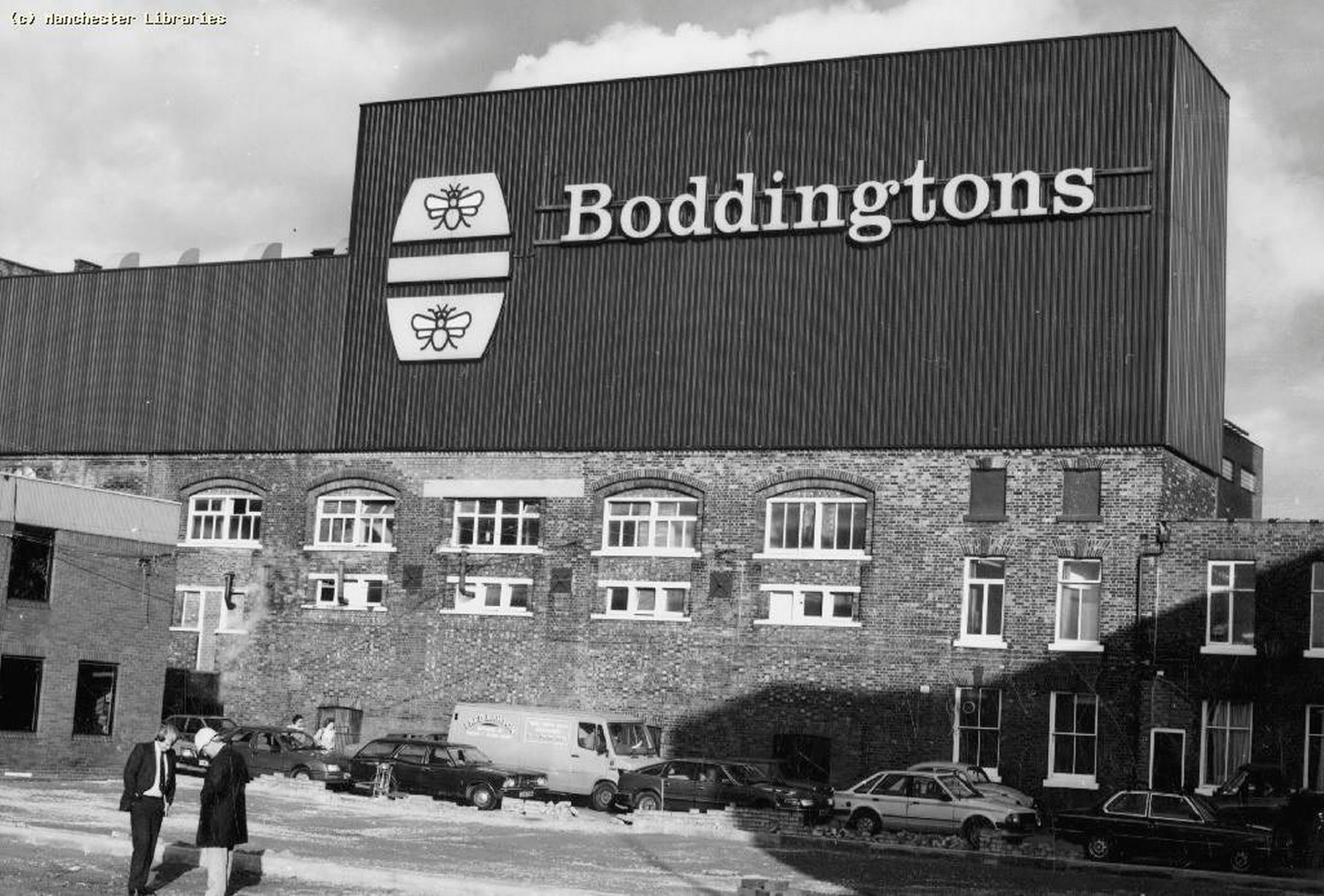 During the Manchester Blitz, the brewery was smashed to bits by the Luftwaffe, who scored a direct hit on their water tanks and caused them to be closed for several months. As a result, the brewery was modernised and improved, becoming the first in Europe to install stainless steel brewing vats and getting all of the best mod-cons of the age.

By the 1930s the Boddingtons family owned around 40% of the shares in the business, but after Whitbread bought a 13% stake in the company in 1961, it was looking increasingly likely that control of the company would move completely away from the Boddington family.

In 1969 a hostile takeover of the company took place, with Allied Breweries attempting to force out the family and strip away its independence. 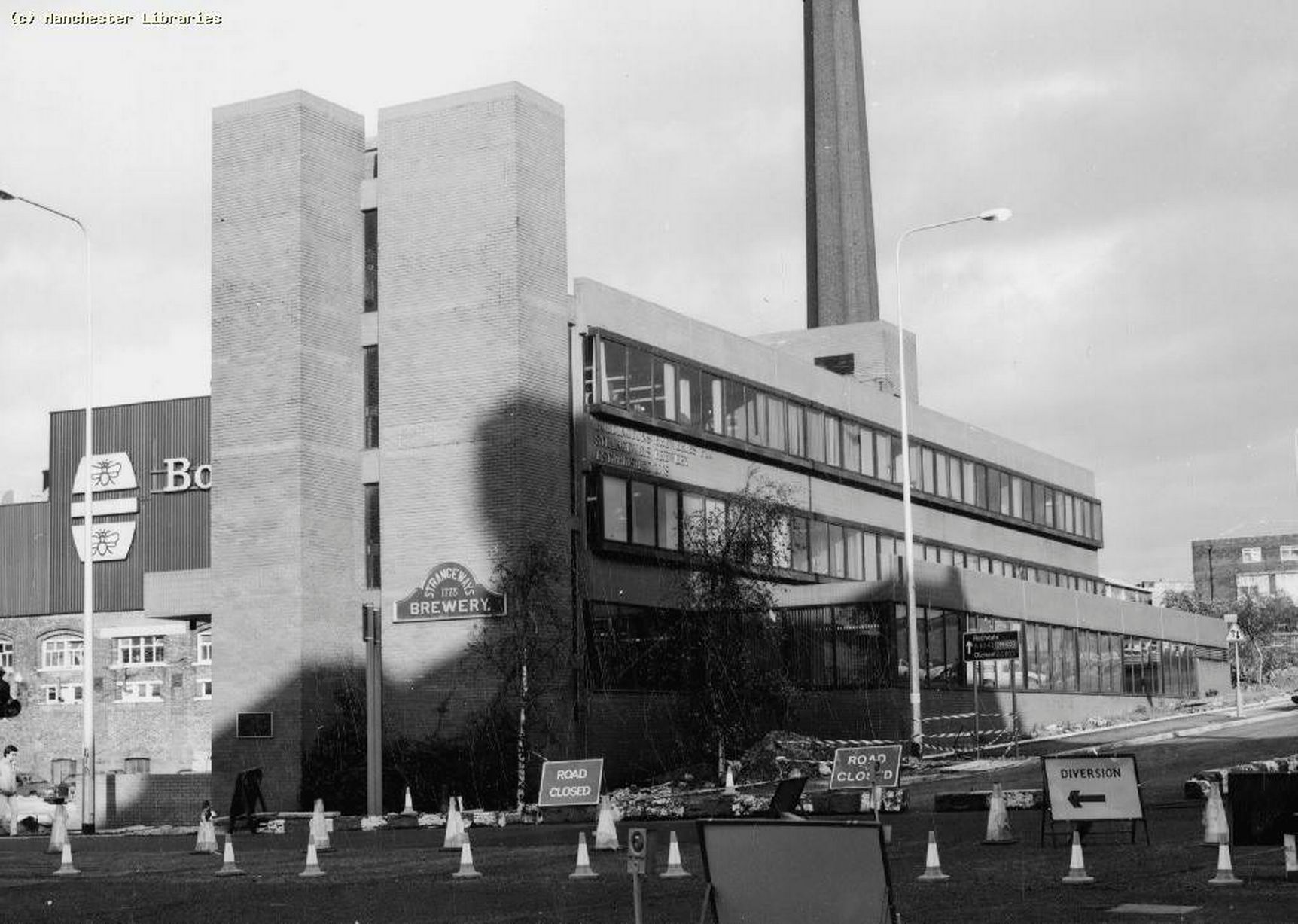 Luckily the company was saved by Whitbread, who raised their stake to 23%, and by 1971 Allied Breweries had sold their 35% stake leaving the family with 10% and Whitbread with 25%. The company was still independent and continued to grow as they entered what many consider to be their ‘Golden Age’ in the 80s and 90s.

The popularity of Boddingtons Bitter seemed to rocket in the 80s, as the brand grew and the brewery expanded its pubs outside of Manchester for the very first time. People were particularly enamoured with the both the cheap pricing of the beer and its distinct flavour – where it achieved a cult status amongst many a pub-goer.

It was during the Whitbread Era that Boddingtons truly became a national and international brand, as they aggressively increased production and exported the beer all around the world.

Much of the success in the 90s was attributed to what many consider to be one of the greatest marketing campaigns of all time, and one that is still remembered today – ‘The Cream of Manchester’. 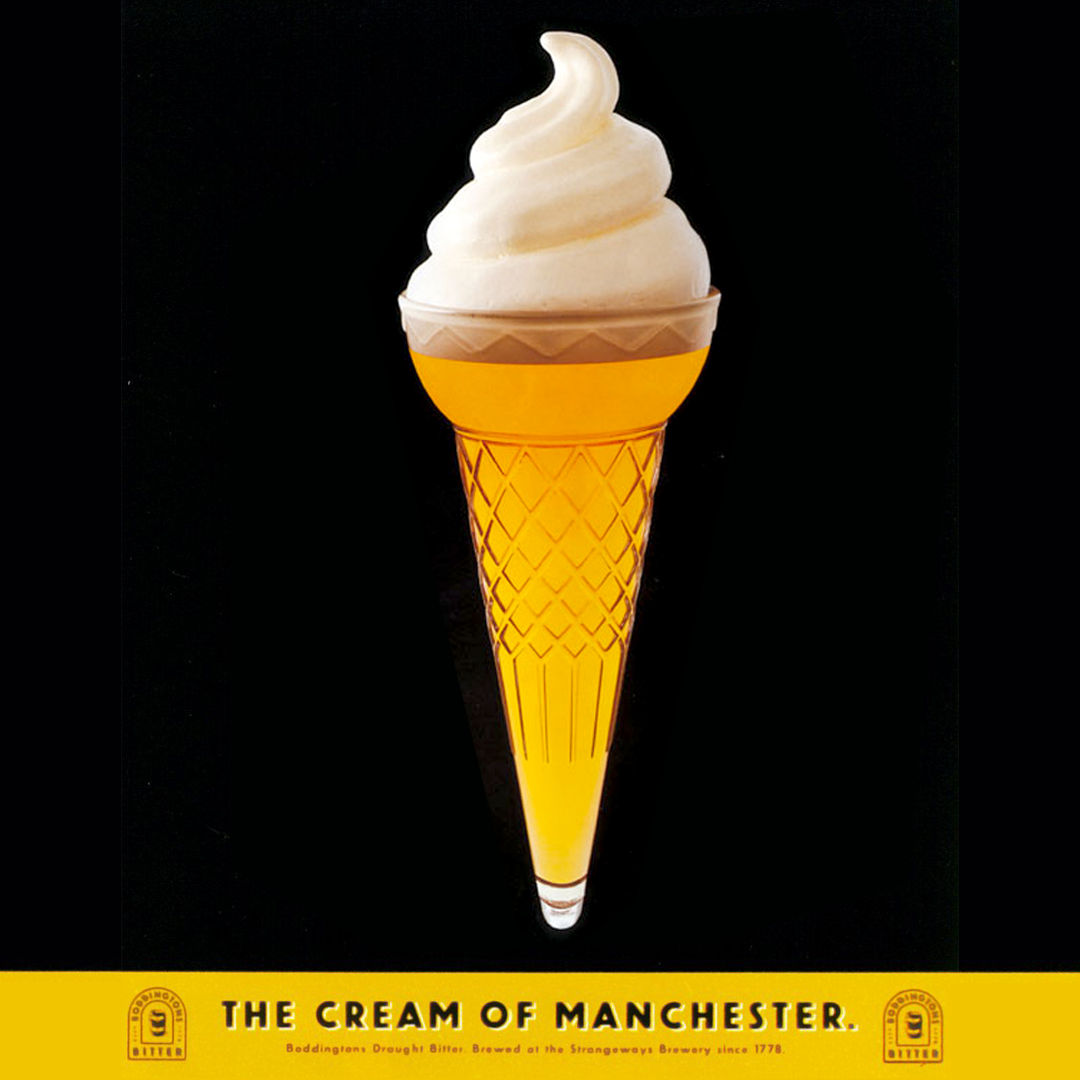 The combination of a distinct style and swagger, colours and that legendary Boddingtons taste all came together in a marketing campaign that parodied many of the other beer brands and helped cement Boddingtons as a true world leader in beer. It also helped put Manchester on the world map in a time when the aftermath of Acid House had left a bit of a cultural hole in the city.

By the time the Oasis lads were on Top of the Pops and BritPop was in full swing, Boddingtons managed to ride on the wave of the cultural tidal wave with a little help from Melanie Sykes and a coolness that was unheard of in the world of bitter – a drink that was usually associated with old blokes in flat caps playing dominos in a manky old pub.

After the success of the 90’s came what many consider to be the catastrophic ‘fall’ of Boddingtons. Not only did it move away from Manchester, but many people see this time as being the end of the true taste of the beer, and sales reflected that.

By this point the company had been acquired by Belgian brewer Interbrew, who are now known as InBev and own so many breweries around the world that to list them in this article would increase its word count by over 400. 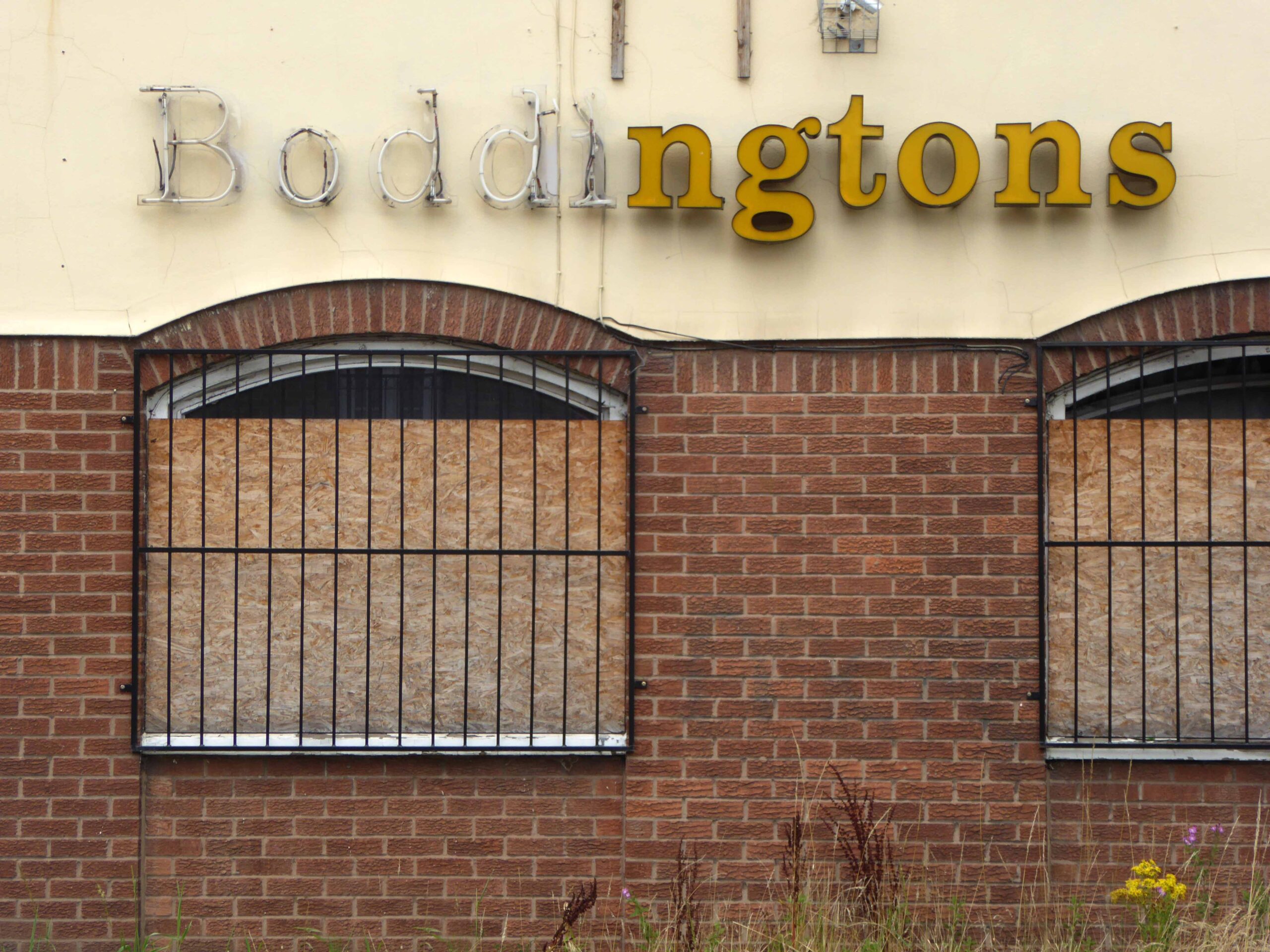 By 2004 they’d announced plans to close the Strangeways Brewery and move production to South Wales and Lancashire with a loss of 60 jobs and a big chunk of the city’s heritage and history.

As a send-off, the brewery was used for the first ever Warehouse Project back in 2006, before it was knocked down completely and replaced by a pretty manky car park, which it remains to this day.

The beer itself has largely disappeared from many pubs and the public consciousness, and even though it’s the 6th best-selling bitter in the UK, its sales have fallen by three quarters.

It’s also worth noting that due to the fact that it’s so rare to find people who drink bitter nowadays – the beer truly has lost pretty much all of the influence (and coolness) it had back in the 80s and 90s.

I highly doubt that an American TV show would mention Manchester’s very own brewery in this day and age – which is a shame – as we’ve truly lost a big part of the city’s history and heritage and it’s unlikely to ever come back.

(If you want a pint of it though – The Bay Horse Tavern sell it on draught.)